We also spent some time overclocking the Core i9-10980XE and using the Gigabyte Aorus X299 Gaming 7 Pro motherboard. Like most of Intel's Extreme Edition processors, the easiest way to overclock Cascade Lake-X is by tweaking various multipliers. BCLK straps and granular frequency manipulation are also available for fine tuning, but the quickest gains will come from simply upping the CPU core voltage and cranking up the CPU's multiplier. Like more mainstream K series SKUs, the Core X series processors are fully unlocked, so CPU, Turbo, and Memory frequencies can be easily altered.


With chips as large and complex as the Intel Core i9-10980XE, power and cooling considerations are very important when overclocking. In its stock configuration, this processor is rated for 165W, but power consumption and heat output can shoot up considerably when the chip is pushed beyond spec. As such, Intel has incorporated options to increase voltages and specify peak current thresholds. These threshold options and power/heat considerations add some wrinkles and complexity to the overclocking process if you're looking to squeeze every last MHz out of a Cascade Lake-X chip, but we still found overclocking the 10980XE to be relatively straightforward and fruitful, even with a mainstream, tower-type air cooler. We didn't use any exotic cooling equipment here to present somewhat of a worst case scenario and something that should be easily repeatable by everyone.

With proper cooling and a moderate .1 - .2v voltage bump we suspect many Core i9-10980XE processors will be able to hit 4.3 - 4.4GHz on all cores with quality air or liquid cooling. With more powerful cooling and some additional voltage though, we suspect higher clocks will be possible, based on our experience.

Although the options are there to disable SpeedStep and various C states, overclocking Cascade Lake-X is really as easy as finding the right combo of voltage, BCLK, and peak Turbo frequencies. By altering those options and leaving SpeedStep, etc. enabled, the processor can still clock-down when not under load, minimizing total power consumption and heat output when the CPU isn’t being fully utilized. 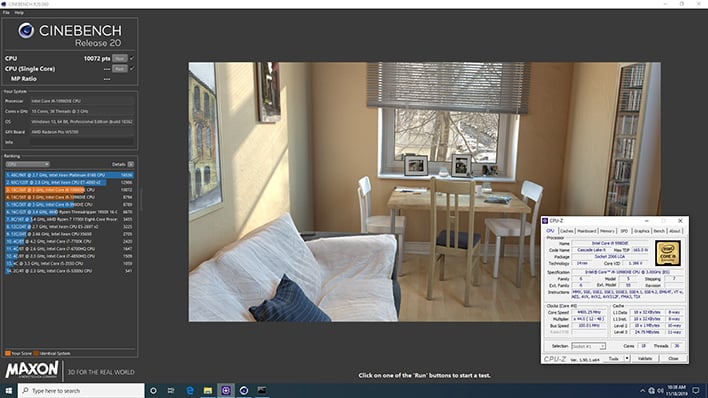 
We were able to take our particular Core i9-10980XE up to a 4.5GHz all-core boost frequency using only stock voltage and a peak, all-core turbo multiplier of 45. At that speed, however, we were pushing the limits of our test platform, as temperatures would spike above 105ºC with long, sustained workloads and result in some throttling and lower than expected performance. With bursty workloads, however, things hummed along nicely. We should also mention, that higher clocks were possible, but temperatures shot up too quickly with our thermal solution and caused the chip to throttle. We had to dial things back to 4.4GHz to minimize the throttling, which occurs once the chip passes the 109ºC mark. 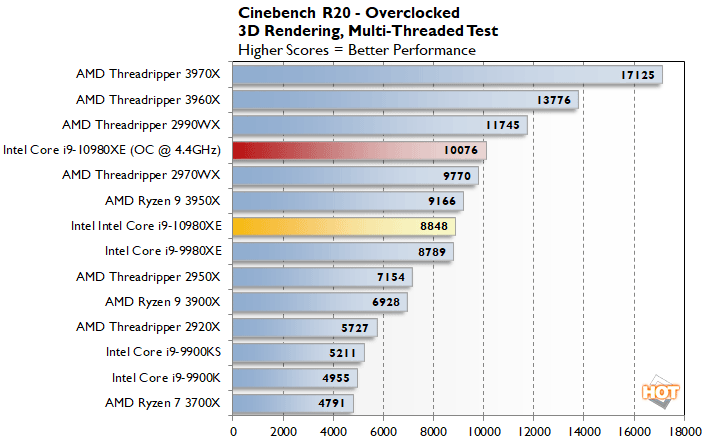 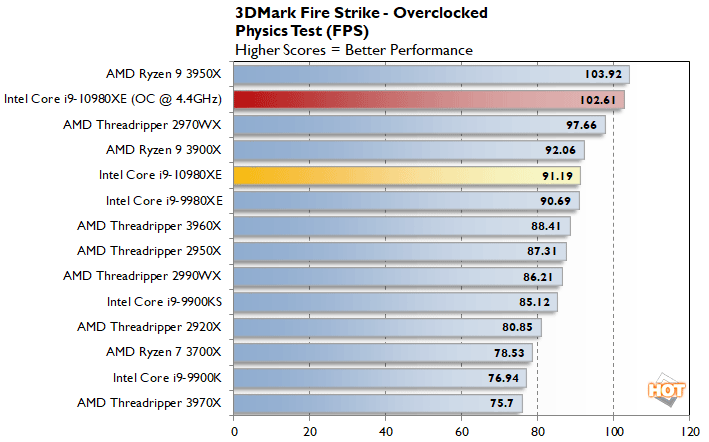 While we had our Core i9-10980XE overclocked, we re-ran a few benchmarks and saw some significant performance gains. The Core i9-10980XE's performance in Cinebench broke the 10K mark and actually overtook the 24-core Threadripper 2970WX. In the 3DMark Physics test, the 9980XE's score jumped up by over 11 points and put it in a position just behind the Ryzen 9 3950X. 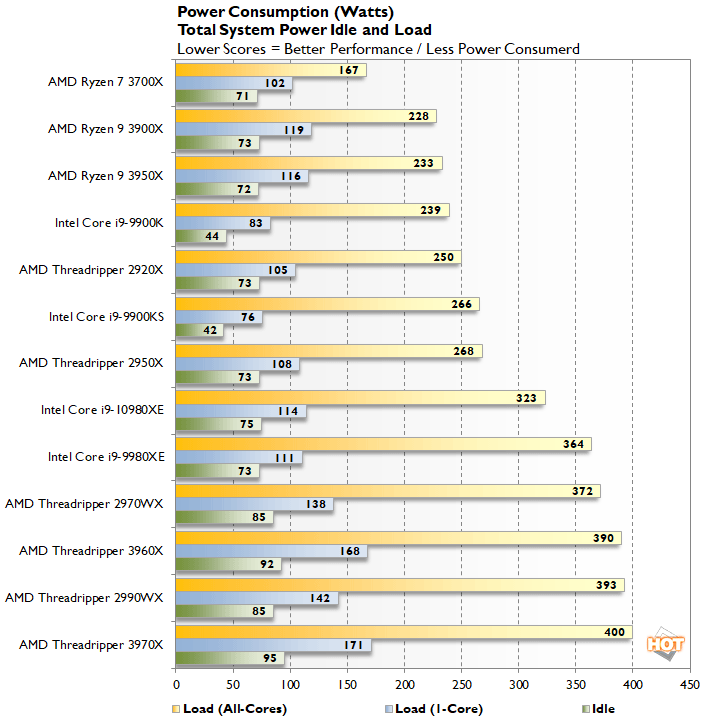 Although Intel is using an updated manufacturing process and selectively binning 10th Gen Core X series processors, they're still being built at 14nm, and with their higher frequencies, we were expecting increased power consumption. It turns out idle power with the Core i9-10980XE is very similar to the Core i9-9980XE, but despite offing slightly better multi-threaded performance, load power was actually lower by a full 40 watts. Load power was much higher than a second-gen 16-core Threadripper, and 90 watts higher than a Ryzen 9 3950X, but it's an improvement over Skylake-X nonetheless.

We also monitored power consumption while overclocked to see how power was affected by the additional boost in frequency and saw a massive jump. Under load, the overclocked Core i9-10980XE-based rig pulled over 500 watts from the wall, which was over 175 watts more than the stock configuration.  Moral of the story -- if you're contemplating buying one of these processors and overclocking it, make sure to take power and cooling considerations seriously.
PREV PAGE NEXT PAGE