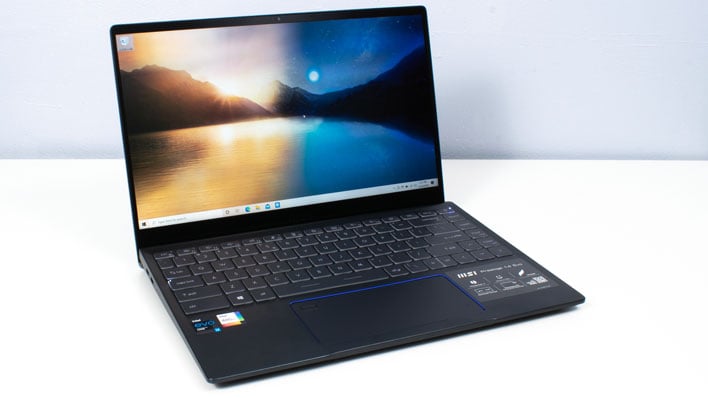 Intel's Tiger Lake mobile platform came out of the gate swinging, with excellent performance and improved power efficiency. The early Core i7-1185G7 development platform we evaluated set several mobile processor records in our benchmarks, and retail notebooks were just as strong when they arrived. So far we've reviewed two such notebooks from ASUS and Dell, but both of those targeted the 2-in-1 segment and commanded a bit of premium as a result, due to their smaller sizes and expanded feature sets. For folks who don't mind (or rather, prefer) the traditional clamshell form factor, and would like to save a couple hundred bucks, MSI has a solution in its new Prestige 14 EVO laptop.

MSI's Prestige 14 EVO might look somewhat familiar to readers with eagle eyes and elephant memories. In our Tiger Lake performance preview, we ran all of our tests on an unnamed proving ground manufactured by MSI. This laptop bears more than a striking resemblance to that test platform, including the port array, spacious trackpad with a fingerprint reader, and even the way the display props the notebook up off a desk with its innovative hinge construction. We wouldn't go so far as to say that that laptop is the Prestige 14 EVO, but it certainly could have been a pre-production prototype. At any rate, let's meet the retail ready MSI Prestige 14 EVO...

At this machine's foundation, we have Intel's Core i7-1185G7, which is the same processor we saw in our Tiger Lake preview. This is the current top dog in Intel's ultraportable mobile lineup, thanks to having the most aggressive clock speeds of the bunch. Unlike the Core i7-1165G7 in the notebooks we've reviewed before, Intel's top-dog Tiger Lake CPU doesn't have a 15 Watt configuration, but instead uses a configurable range between 12 and 28 W. OEMs can configure the CPU however they like based on their system's design, and MSI confirmed to us that the Prestige 14 EVO uses the 28 W setting. Just like other Tiger Lake notebooks, the Core i7-1185G7 has Intel's Iris Xe graphics, which we've found to be pretty speedy for an integrated solution.

For memory, the Prestige 14 EVO has 16 GB of LPDDR4X memory clocked at 4266 MT/sec. That's a pretty standard configuration for all the Tiger Lake notebooks we've looked at and gives plenty of bandwidth for both the CPU and integrated GPU. That memory is soldered to the motherboard though, so don't count on upgrading later. For storage, there's a PCIe 4.0 NVMe SSD with 512 GB of capacity and a Phison controller, which should be both very quick and plenty spacious for most users. This drive has the standard M.2 2280 form factor, so upgrading later is no issue.

Networking options on the Prestige 14 EVO are spartan. Intel's 802.11ax and Bluetooth 5.0 combination handle all wireless duties. It's Wi-Fi performance is pretty speedy, though, as we found it can hit 220Mbs downloads while in the same room as our AP, or around 180Mbps from across the house. Bluetooth paired to our wireless mouse and headset simultaneously, without issue. The downside is the lack of wired Gigabit Ethernet, but most smaller notebooks have to do without a wired connection as well, so this is not unusual. 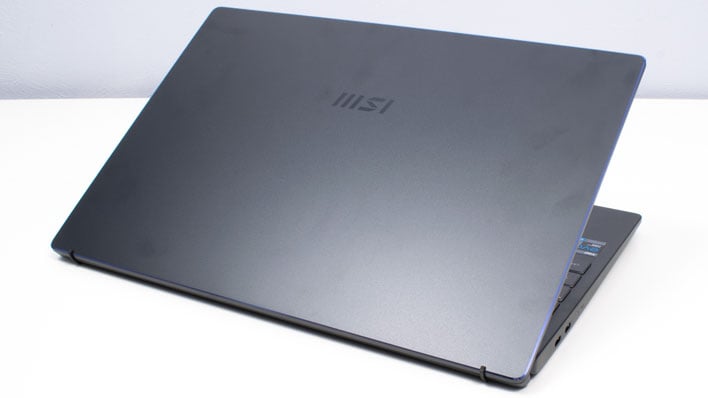 MSI built the Prestige 14 EVO from an all-aluminum shell in a Carbon Gray finish, though white is also available. The lid casing has has a tinge of blue to it, depending on how the lights hits. The machine's 12.55" x 8.46" footprint is a touch larger than the other Tiger Lake 2-in-1 systems that we've looked at, but that's because this notebook houses a slightly larger 14" 1080p display. The bezels are pretty modest as you'd expect, so the size is still pretty small. Thanks to the full aluminum body and frame, the Prestige 14 EVO weighs in at just 2 lbs, 11 oz on our scales. Overall it weighs just about the same as the ASUS Zenbook Flip S while occupying only a couple of additional square inches.

The display hinge acts as something of a prop for the Prestige 14 EVO's base, lifting it up off the desk by a couple of millimeters to make for better air flow than sitting flat. As we mentioned above, the display measures 14" diagonally and has a resolution of 1,920 x 1,080. This IPS display can handle 100% coverage of the sRGB spectrum with a maximum brightness of 400 nits. Indoors, the screen gets plenty bright, and outside it wouldn't be great for direct sunlight but should do just fine in the shade. There's a nice anti-reflective coating on the display giving it a matte finish. 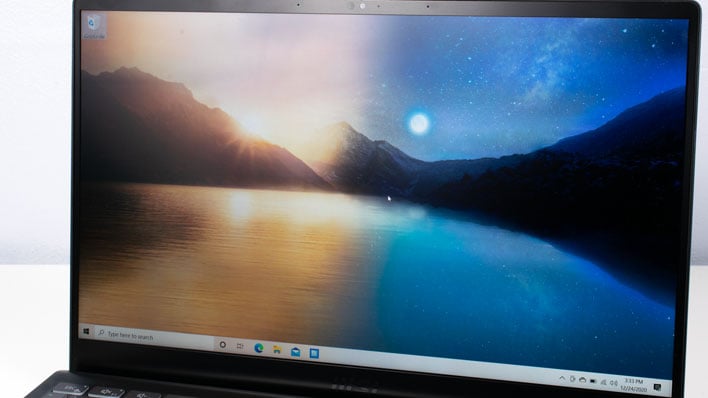 Above the display sits a 720p HD webcam flanked by a pair of noise-canceling microphones. The image captured by the camera is pretty average. It's not the sort of thing you'd want to record or do much streaming with, but it's plenty capable for Skype and Zoom meetings. Windows Hello facial recognition enthusiasts will have to look elsewhere, though, as the webcam does not have infrared sensors. Buyers looking for biometric authentication need not worry, though, as there's a fingerprint reader we'll get to shortly.

The microphones do a really nice job of blocking out the environment and focusing solely on our voice. The microphone is far-field capable, so activating Cortana from across the room was no problem. For speakers, MSI includes stereo drivers tuned with MSI's Nahimic 3 spatial audio. Just like most laptops, the speakers lack bass, but have plenty of definition in vocal ranges, which makes them great for online meetings and most YouTube content. Those who want more can use the built-in headphone jack and some external speakers, of course. 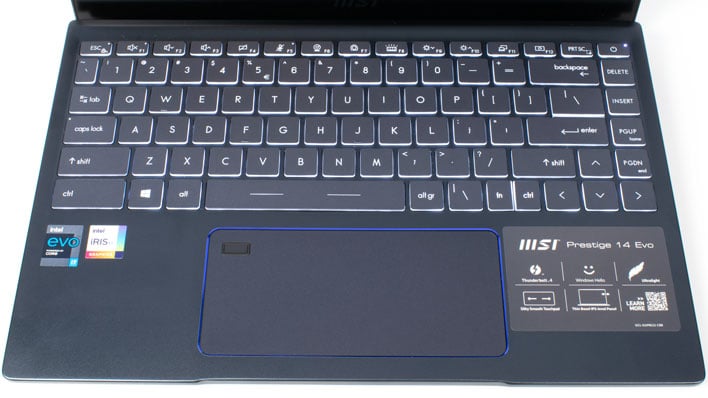 Below the display sits a nice backlit keyboard. The keys were plenty comfortable to type on, and this review was produced using it. We had no problems with doubled input or dropped keystrokes. Key travel is specced at 1.5 millimeters, which is pretty shallow, but typical for notebooks in this size class. Backlighting is very handy in the dark or in dimly lit rooms, and the LED lighting is plenty bright there. We were most comfortable with the brightness turned down to around 70% in MSI's configuration utility.

The Prestige 14 EVO's trackpad is very wide and houses the built-in fingerprint reader. All of the typical Windows 10 gestures are supported, including scrolling with two fingers and swiping to switch apps. The fingerprint reader had no problem registering our fingerprints and logging into Windows via Windows Hello. We did find that while using the trackpad, the fingerprint reader would occasionally get in the way, though. 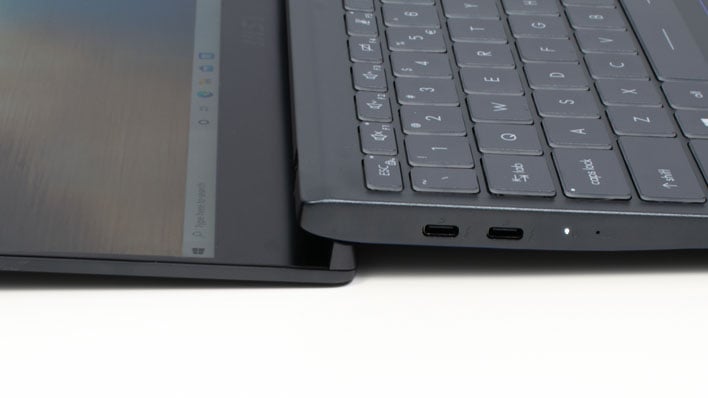 MSI gave the Prestige 14 EVO a useful set of ports. On the right is a USB 3.2 Gen 2 Type-A port, a micro SD card reader, and an analog headset jack that works with four-pole headsets with an integrated microphone or plain old stereo headphones. On the left is a pair of Thunderbolt 4 ports with the customary USB Type-C connector. These ports are backward compatible with Thunderbolt 3 peripherals and any USB spec. They can also drive secondary displays at up to 4K and 60 Hz. These ports also host the 65 W charger MSI includes with the notebook.

For the most part, the Prestige 14 EVO's software experience can be described as "just Windows," which is likely a good thing for most consumers. Our test unit came with Windows 10 Home version 2004 (Spring 2020) preinstalled. Most of the other software consisted of drivers and control panels for the included hardware. MSI also shipped the unit with a Norton trial pre-installed, but it would get in the way during testing as it begged us to upgrade, so that had to go.


To control all of the hardware in the Prestige 14 EVO, MSI's Center for Business and Productivity came preinstalled. While the name sounds like some sort of non-profit organization, the CBP gives users control over power and fan profiles, keyboard control, and more. Unfortunately, each time we opened the utility, we were prompted to register an account on MSI's website. That's completely optional, however, as we were not limited in how we could interact with the system's hardware. In that respect, it's kind of silly to have an account system at all.


The Performance tab is where all the fun happens. Here we can choose from one of four fan profiles, including a Silent profile that dials back system performance to keep the machine super quiet. The High Performance option kicks the fan into gear at all times to maximize cooling and performance, while the balanced profile will allow the blower to shut off once temperatures reach a specific threshold. These profiles didn't seem to have much effect on performance during our benchmark runs, however. Those tests usually don't require all-out performance at all times, though. We did find that the High Performance fan profile prevented performance from dropping drastically from run to run, especially when we ran Cinebench in a loop to test thermals. We'll talk more about that later on.

MSI Center for Business and Productivity includes other information about the system, too. The System Analysis tab shows the product name, BIOS revision, and some hardware details. The Support tab has a system checker which shows free storage and RAM space, and has a battery optimization section. The Best for Mobility option will charge the battery to 100% all the time, while other options will limit the charge to either 60 or 80 percent of maximum to make sure the battery endurance doesn't decline over time.

Now that we've become acquainted with the MSI Prestige 14 EVO, it's high time we put this lightweight powerhouse through its paces...
NEXT PAGE