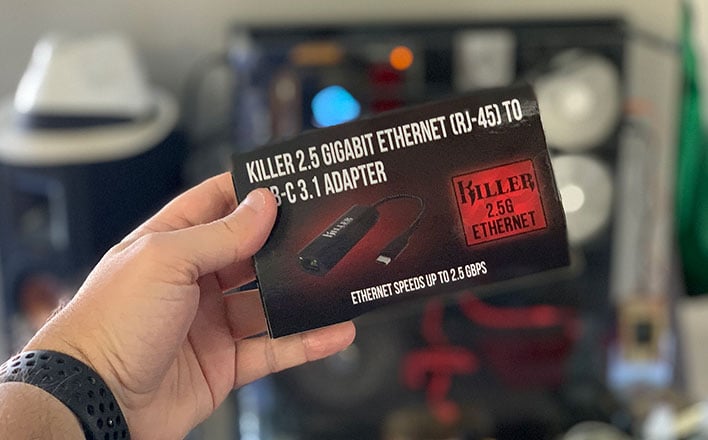 Motherboard and laptop makers are starting to implement faster integrated NICs onto their products, though 1Gbps LAN connections are still very much ubiquitous. And in an effort to push increasingly thinner and lighter laptops, many recent models have nixed wired LAN ports altogether, leaving you with only wireless connectivity. Good news, though—faster (and wired) network connectivity is within easy reach by adding a simple adapter to the mix. To that end, you can score a discount on the Killer E3100 right now.
The Killer E3100 is available for $39.99 on Amazon, just be sure to check the "Save an extra $10" box on the product page before adding the item to your cart (it's hard to miss, as it's right below the price). That is fairly affordable, and perhaps surprisingly so, if it has been a bit since you window-shopped any Killer products.
A lot has changed since the first Killer NIC debuted in 2006 for an eye-popping price. Back then the company was known as Bigfoot Networks, which was acquired by Qualcomm's Atheros arm in 2011. It would later be spun off into Rivet Networks, and the focus shifted to more affordable products designed in close collaboration with Intel. Incidentally, Intel acquired Rivet Networks last year.

You may recall we took a look at the previous generation Killer 2500 Gigabit adapter a few years ago. It performed rather well overall, and had a noticeable impact on performance in some situations.

The Killer E3100 is Rivet's latest adapter. It features a second-generation Killer 2.5Gbps Ethernet controller, with backwards support for 1Gbps. Installation is easy, too—just plug it into a desktop PC or laptop with a USB 3.1 Type-C port and you are good to go.
In addition to faster network connectivity and "up to 75 percent lower latency when gaming," this also works with Rivet's Killer Doubleshot Pro technology, when combined with a Wi-Fi 6 (802.11ax) wireless adapter.
"DoubleShot Pro enables your computer to use Wi-Fi and Ethernet at the same time, and it also automatically utilizes the fastest network connection (Ethernet or wireless) for all of the PC’s high priority traffic. All standard traffic is then sent over the other interface. This ensures the highest priority traffic will always be put on the fastest and most reliable link. Killer technology will automatically identify latency sensitive gaming and voice traffic and send it over the fastest interface," Rivet explains.
This is a neat accessory. It's not clear how long the coupon will remain active, so if this something you can benefit from, pounce while you can.