God Of War PC Gameplay And Performance Review: Nailed It

God of War: A Fantastic PC Port With A Multitude Of Tweakable Settings

Being a game released in 2018 and a port from the PlayStation 4, you might reasonably expect God of War to be light on system requirements. Well, that's going to depend greatly on your settings. Unlike many others, this is a high-quality PC port and Jetpack Interactive (the studio that did the bulk of the porting) has done a fine job giving us a game with better options than even the majority of PC-first titles. 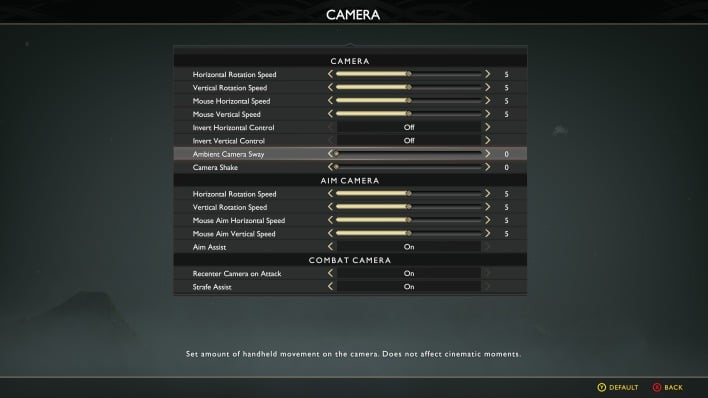 I recommend every user to dig around in the settings menu to configure your experience exactly as you want it to be. There are an impressive number of options in the game that will allow you to pick and choose the way you want the title to behave on your system. From the extensive camera options seen above, to the customizable HUD, and even a full-fledged accessibility menu with options for disabled gamers, God of War's developers really took their time to accommodate many different types of player, and they deserve to be lauded for that. Nearly all of the settings can be toggled during gameplay, too, which is further commendable.

That includes a full keyboard-and-mouse control customization dialog, although somewhat-confusingly, it's only available if you are currently using a mouse and keyboard to play—if you touch one of the sticks on your controller it will unceremoniously boot you out of the key bindings menu, discarding your changes. There are a couple of minor bugs in the key bindings options as well; for example, you can't re-bind the T key because it is required for certain in-game actions that aren't indicated in the controls menu. 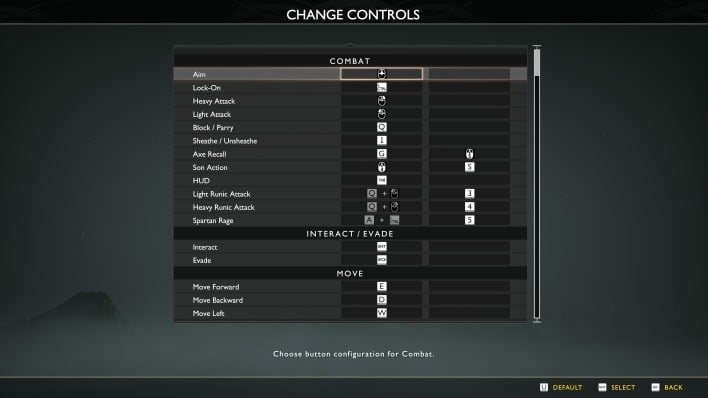 God of War has full key rebinding, and the in-game prompts change, too.

Still, the keyboard and mouse controls work wonderfully. I played through the first three hours of the game using an Xbox One controller and had no problems whatsoever, then returned to the start and played through again, this time using keyboard and mouse. I would say that both options are equally valid, but for players who are comfortable using either, I might recommend the keyboard simply because certain actions are easier due to the addition of shortcut keys, like activating Spartan Rage, for example. On a controller, you have to click both sticks at once, but on the keyboard you simply press 5.

A Window(ed) View Of Midgard

The "Display" section of the settings is where you'll set the basic output options. You can manually select which monitor to use, which is great. Your only display mode choices are Windowed and Borderless; there's no exclusive fullscreen option, although given the way Windows 10 and 11 treat "full screen" games, it's not likely to be much different from Borderless mode anyway, at least in a practical sense.

The motion blur option starts out at the maximum value, and that was probably necessary on the PlayStation 4 (which struggled to hit even 30 FPS in this game), but I'd recommend most PC gamers to turn off both that and the film grain filter. 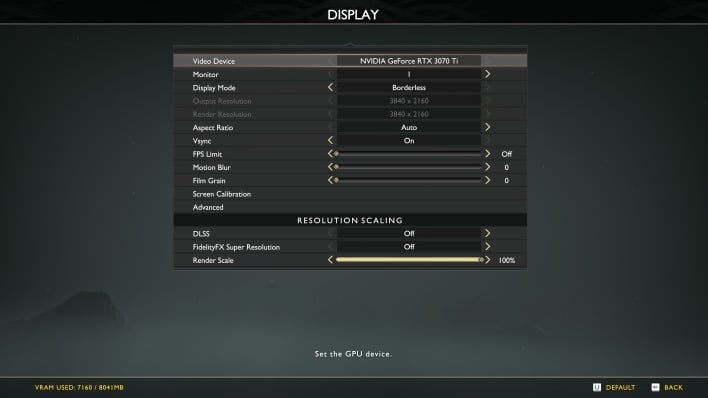 HDR and brightness settings live in the Screen Calibration menu, although the game will ask you to set those the first time you launch it. Under "Advanced" you'll find options related to NVIDIA's Reflex latency-reduction technology. Regrettably I don't have the equipment on hand to properly test Reflex, but I did some informal investigation. CapFrameX was able to detect a ~6ms reduction in latency, but I couldn't tell the difference during real world gameplay. God of War isn't a particularly reflex-heavy game, so while I'm glad to see the option, it doesn't seem particularly necessary here. However, enabling it didn't seem to have any impact on frame-time stability, so if you're ultra-sensitive to latency the option is there.

Down in the "Resolution Scaling" section you have three options: NVIDIA's DLSS, AMD's FSR, and a simple render scale setting. Obviously, DLSS will not be available to players using Intel or AMD GPUs, while FSR and the render scale setting are available to everyone. I did quite a bit of testing of DLSS and FSR using the "Quality" setting for both. Conveniently, when you enable either one, the "Render Resolution" at the top of the screen changes to indicate the actual pre-upscaling resolution. Not all games do this with DLSS, so that's really nice to see. We'll talk more about comparing DLSS and FSR a little later after the performance data. 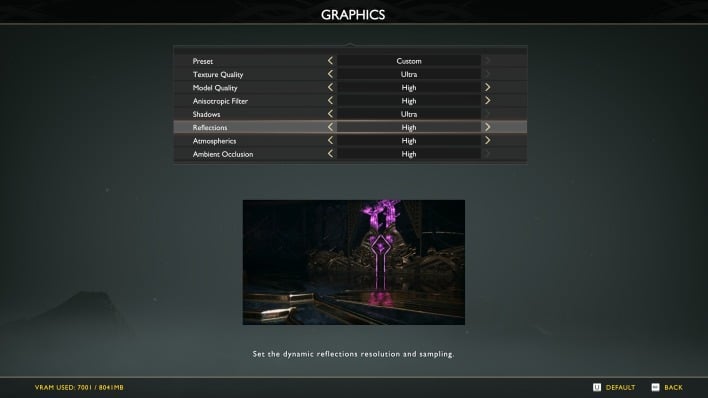 Graphics settings menu, with our recommended settings for ≥8GB GPUs.

In the "Graphics" part of the options menu you can select from "Low," "Original," "High," and "Ultra" presets. Alternatively, you can select Custom and set each option the way you'd like; while doing so, images below the menu will attempt to illustrate the effect of your changes, although they're really too small to see even on a big 4K display. The "Original" setting is notable; it sets up the game the way it ran on the PlayStation 4. Both the "High" and "Ultra" settings increase the visual fidelity above what you can achieve on console, even on the PlayStation 5, as God of War does not have a native PlayStation 5 version.

For our performance testing, we used the "Original" and "Ultra" presets for simplicity's sake, but I would actually recommend most players head into Custom and tweak a few options by hand. For example, the difference between High and Ultra on the Model Quality and Reflections settings is minimal; reducing those to High could help save a few frames. Likewise, the Atmospherics Ultra setting can tank performance in areas with a lot of fog, and lowering them to High or even Original can improve this significantly with minimal visual fidelity loss.
God of War uses texture streaming, so the Texture Quality option doesn't actually change the resolution of the textures, but instead how much video memory the engine is allowed to use for the texture pool. Most players should just leave this at Original because the visual fidelity difference is fairly minimal, or even nil in some cases. If you have 8GB or more of video memory, feel free to crank it up though; even on our Radeon RX 6800 XT and its 16 GB of GDDR6, we never saw the game use more than about 7.9GB of video memory.

Next up, the Ambient Occlusion setting. Unless you're running out of video memory, you're unlikely to see too much performance impact from setting this to High, and it makes quite a large visual difference compared to the Original setting. This is definitely one to leave on High unless you've already exhausted your other options for improving performance.

The opposite is true for the Anisotropic Filter setting. It has a small performance impact, but it also has a small visual impact. If you're hurting for performance, don't feel bad about turning this one down. God of War is not a game with a great number of large, flat surfaces oblique to the camera, so you're not likely to notice the limitations of a low anisotropic setting anyway.

The biggest impact on visual quality is also the setting with the highest performance demand. Setting Shadows to Ultra doesn't just increase shadow map resolution, but in fact improves shadow cascade distance, which means that areas of the game which should be shadowed, but aren't in the original presentation, become so. There's an argument to be made that, while it's more realistic, it isn't how the game was originally designed to look. Still, it lends the whole game a much more moody feel, and honestly as long as you're maintaining a reasonable framerate, it's worth the performance hit, even though it can be quite large.
PREV PAGE NEXT PAGE