God Of War PC Gameplay And Performance Review: Nailed It

God of War: It's Been A Long Time Coming But What A Fantastic PC Game 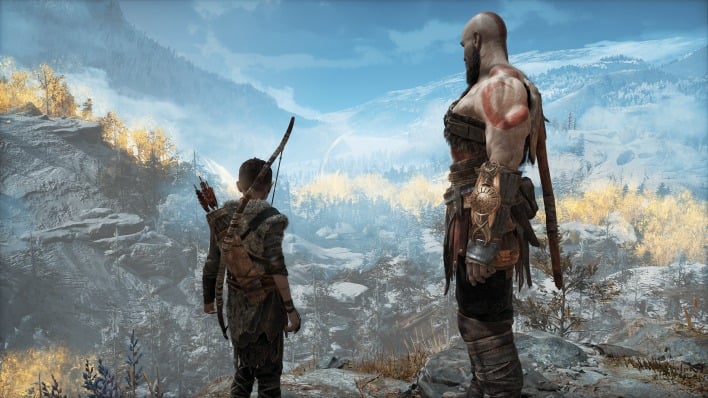 I'll tell you the truth, loyal HotHardware reader: I passed on the original God of War when it was new back in 2005. One of my friends picked up the game in its original PlayStation 2 form a few days after it released, while I purchased Devil May Cry 3: Dante's Awakening, which had just come out a month before. We played the two games side by side, and it made an interesting comparison, but it left me without much interest in playing Sony's game for myself.

Over two years later, when God of War II came out, I became interested to try it on my new HD TV and backward-compatible PlayStation 3. The aforementioned friend convinced me that I should play the original game first so I would be caught up on the story. I borrowed it from him and finished it in a single sitting overnight. (Remember being in your 20s?) I won't say that it blew my mind, but I definitely had a blast, and felt that I had missed out by not playing it sooner. God of War II was even better, with an incredible finale that left me wondering where the series would go next. 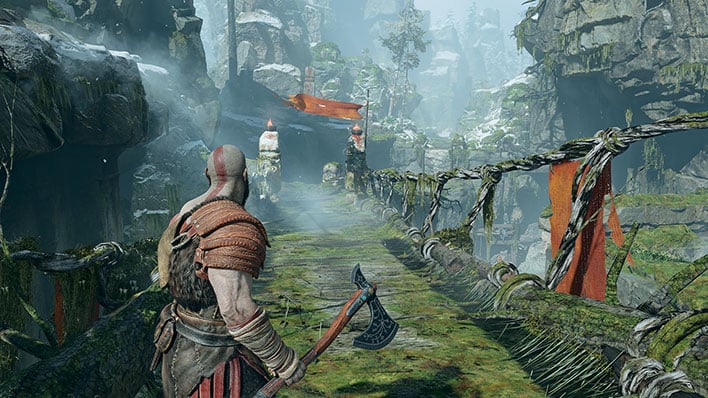 It's time to get busy.
Unfortunately, my PlayStation 3 suffered the dreaded "Yellow Light of Death" and I never did get around to playing the third main-series installment or the spin-off title, Ascension. I also missed the two PlayStation Portable games, the text-based Facebook Messenger game, the VR title, and the pre-smartphone mobile game—all of which are canon to the plot of even the most recent title.

Despite lacking a subtitle or number in its name, God of War is the fourth main-series title in the God of War franchise. Developed by Sony's Santa Monica Studios and released exclusively for the PlayStation 4 in 2018, it immediately gathered effusive praise from games media and gamers alike. This PC release, then, has been a long time coming, but it's finally here, thanks to the joint efforts of Santa Monica Studios and a little company known as Jetpack Interactive.

God Of War For PC: It's A Whole New World

Fortunately, even though the confusingly-titled God of War is not a reboot, remake, adaptation, reset, or remaster of the series, you don't really need to know anything about the classic God of War games to appreciate this release. Even though all of the original continuity is in place, this game—which some folks facetiously call God of War 4—takes place decades after the events of the original series. Spartan warrior Kratos, the one-time Grecian God of War (having destroyed Ares for that title), has left his past behind and now lives quietly in Midgard, otherwise known as ancient Norway. 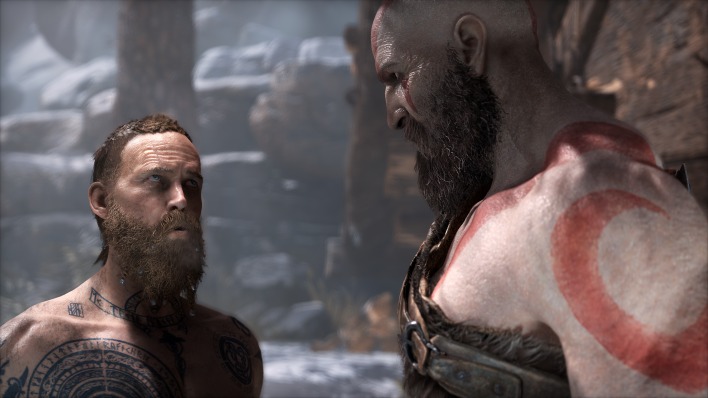 That guy certainly doesn't look Greek, or friendly, or sober.


It's easy to see why some folks think that this title is a reboot, because the new setting brings along new almost-everything. Besides the setting, the visual style, gameplay, and pacing are all completely different. The original series comprised linear action games played with a fixed-camera or chase-camera perspective, and with little to get in the way of Kratos gruesomely murdering virtually everyone he encounters. Enemies came and fell by the dozens, and there wasn't much in the way of advancement, exploration, or characterization.


By contrast, God of War (2018) is a much more methodical, cinematic, and role-playing-infused experience. Rather than the long-ranged Blades of Chaos from the classic games, Kratos starts out with the heavy Leviathan Axe as his main weapon. Enemies mostly come in small groups outside of special encounters, and even a single enemy can be a serious threat to an unprepared player. The core gameplay draws inevitable comparisons to games like Dark Souls, but it's uniquely played from a third-person over-the-shoulder perspective more similar to Gears of War and its follow-ons, like Mass Effect and Warframe. 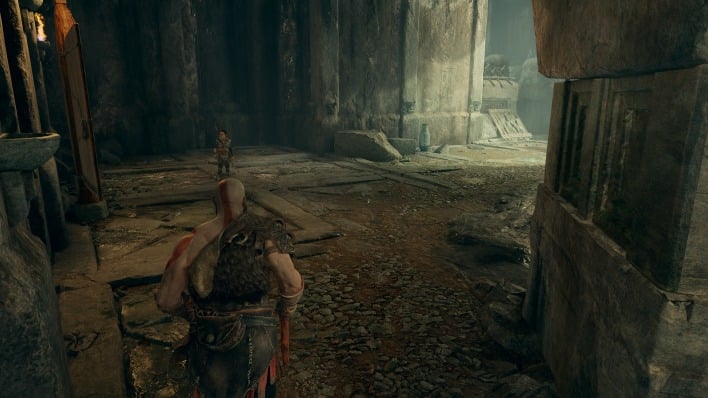 Even small side areas like this nook are impressively-detailed.


The perspective shift really alters the flow of the game and sets it apart from its 3D-action contemporaries. Combined with some visual tricks like built-in shaky-cam, the over-the-shoulder camera can help to make the game more immersive, but it can also be irritating when fighting multiple enemies. The developers implemented a clever warning system to advise the player of off-screen enemies and it works well enough. However, we do still wish that there was an option to unlock the camera, use a proper chase-camera, or even just swap the camera to Kratos' other shoulder.


You Got Your Soulsborne In My God Of War

God of War is now a role-playing game. That fact eluded me even for a bit after I started playing. The game takes a couple of hours before it even bothers to introduce you to your stat-line or skill trees, and it would be easy to get the impression that your stats are cosmetic and irrelevant. That is not the case. While enemies don't spray equipment like the loot piñatas in Nioh or Borderlands, the equipment upgrades that you acquire can have a tremendous effect on your performance, just like in a more traditional RPG. 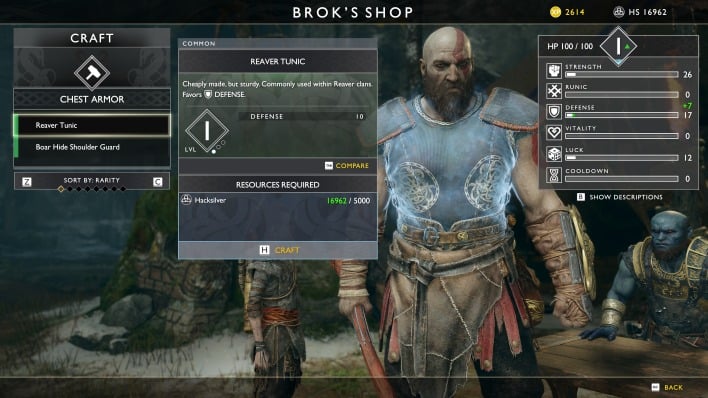 Changing your equipment affects both your stats and your style.


Not to belabor the comparison, but the stat-line in God of War will be familiar to players of the "Souls" series. You don't have "levels" like in those games, so you don't directly increase the stats, but instead modify them using equipment and socketable gems. Aside from the usual strength and toughness, you can also customize yourself to slant your damage more toward magic or physical damage, as well as emphasizing a playstyle that has you spamming your magical abilities or simply crushing enemies with your fists.


To be honest, all of the RPG mechanics feel a little bit tacked-on to the experience. They don't really hurt it, they're just kind of unnecessary. Without getting into spoilers, the latter half of the game opens up into an open world, and the role-playing mechanics mostly feel like they were added to the game so that the developers had something to give you for bothering with the rather similar side-quests. It's ironic, because even if you plow straight through the main story—which is an option, and I recommend it—the game isn't short at all. It really didn't need to be extended with side-quest shenanigans and an extraneous open world.

What God Of War Difficulty Setting Is Right For You? 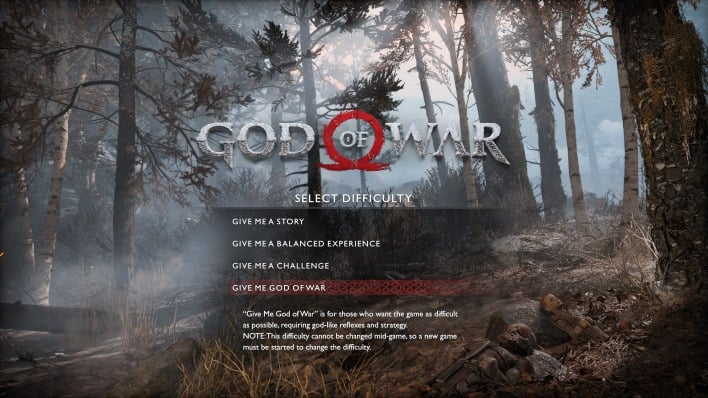 The fourth difficulty setting is not for the faint of heart.


There are four difficulty settings, which you can see in the image above. I didn't investigate them as thoroughly as I might have liked, but the primary changes within the first three difficulty settings are how much damage that both you and enemies take. There also may be changes to the enemy AI; enemies on the higher two difficulties do seem to be a bit more aggressive and resistant to being staggered. Still, I would recommend that most players, even action-game and action-RPG veterans, stick to the top two easier difficulties.


That's not because the higher two options are particularly hard. As a veteran of challenging action games, I would say that God of War is of about normal difficulty for an AAA action title, and likely won't present an excessive challenge to veteran action gamers, even on the highest setting. Rather, the higher difficulties' multipliers to enemy health can make even otherwise-inconsequential fights an irritating slog as you have to beat on single enemies for a minute or more to eliminate them. Particularly early in the game, where your move-set is quite limited, this becomes tedious very quickly. 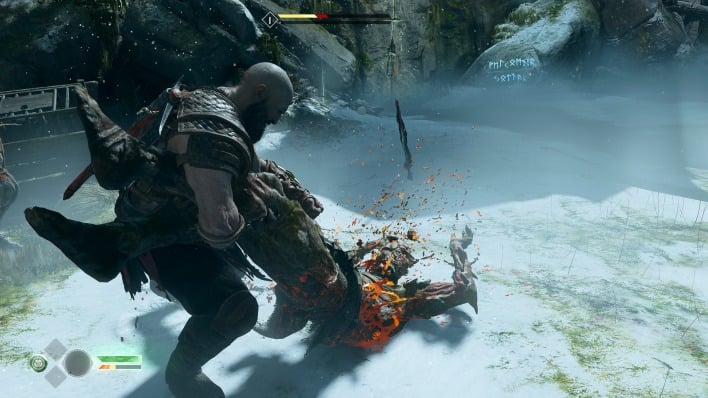 This Draugr is about to have a bad time.

On the lower two difficulties, where enemies are more reasonably fragile, combat is quick and can be quite satisfying. The audio design in the game is excellent, and really accentuates combat actions perfectly; landing a crucial parry against an incoming enemy has a resounding thud as they bounce off your shield, and axe swings sound brutal as you hear the blade ripping through flesh. If I have one complaint about the game's combat, it's the aforementioned relatively-limited move-set, but in the game's defense you can unlock more moves through a simple skill tree system. Besides, you have a lot more options in this game than simply mashing RB to cleave your way through enemies. 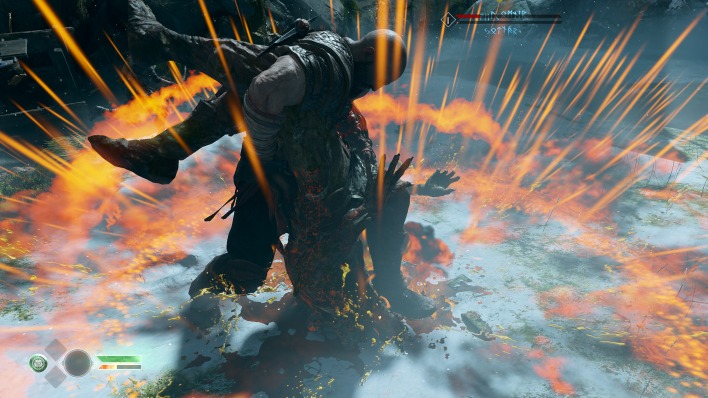 God Of War Is Also Dad Of Boy

Among those options is the ability to tell your son Atreus, equipped with the Talon shortbow, to fire arrows at your enemies. Kratos' son Atreus is a nearly-constant companion throughout the game, and he helps you in combat in a variety of ways: he can leap upon human-sized enemies and choke them, he can attack with his dagger, and he can fire arrows. His attacks may distract enemies, giving you a chance to leap upon their exposed backsides.
Atreus' equipment can be upgraded like Kratos', although I might advise you to spend your upgrade materials on dad first, as Atreus' utility in combat can be pretty variable. His usefulness is greater in the game's puzzle-solving sections, where you will generally be presented with a path closed to Kratos yet open to Atreus. You have to perform simple actions like tugging on a chain or throwing your axe at distant targets to open the path, and Atreus is central to most of these sections. Atreus is also capable of reading the Nordic runes throughout the game, which Kratos is not. It makes sense, given that he's a foreigner to the setting. 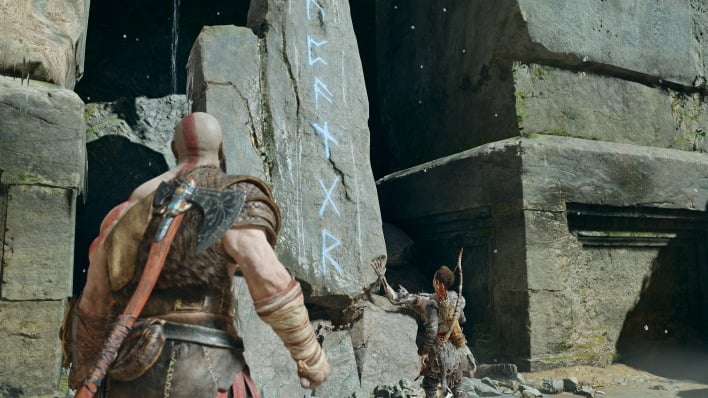 Kratos must rely on Atreus to read the runic writing that abounds in Midgard.

While he can be useful in combat and critical to solving puzzles, Atreus is obviously most important as the deuteragonist in the game's story. The game takes a somber tone early on, and Kratos seems quite severe in his interactions with the child, but this is immediately revealed to be mostly due to the recent death of the family's matriarch. As they travel together, Kratos warms to the boy significantly and there are a number of heartwarming parenting moments—at least, as heartwarming as Spartan parenting can be.

Of course, this is a performance review, not just a game review, but before we get into performance, let's talk about the game's settings.
NEXT PAGE