3DMark is a synthetic GPU benchmark for assessing graphics (GPU) and physics (CPU) performance. 3DMark supports both DX11 and DX12, depending on the particular test being run, which makes it handy for testing GPUs of various performance levels. We used the Time Spy benchmark, 3DMark's DirectX 12 test, to push the XPS Desktop Special Edition. This test has multiple presets, but the standard Time Spy test is fairly taxing and we have a plethora of reference data, so that's what we stuck with. 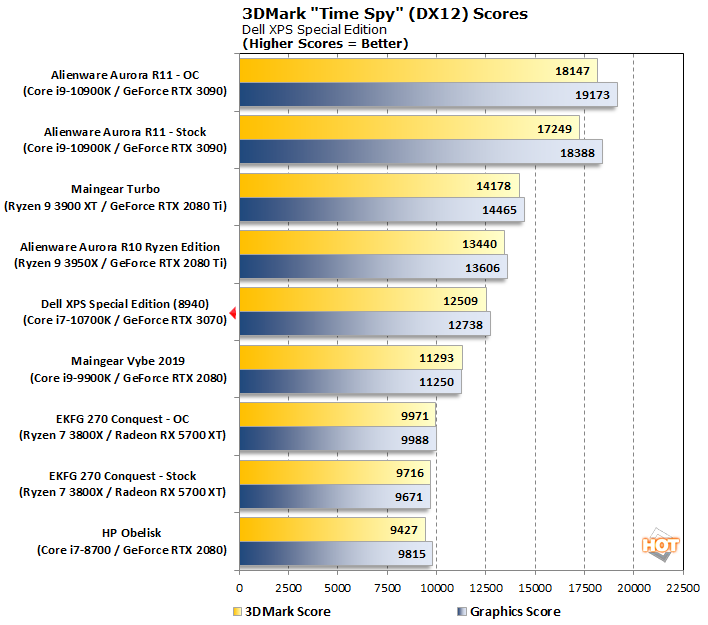 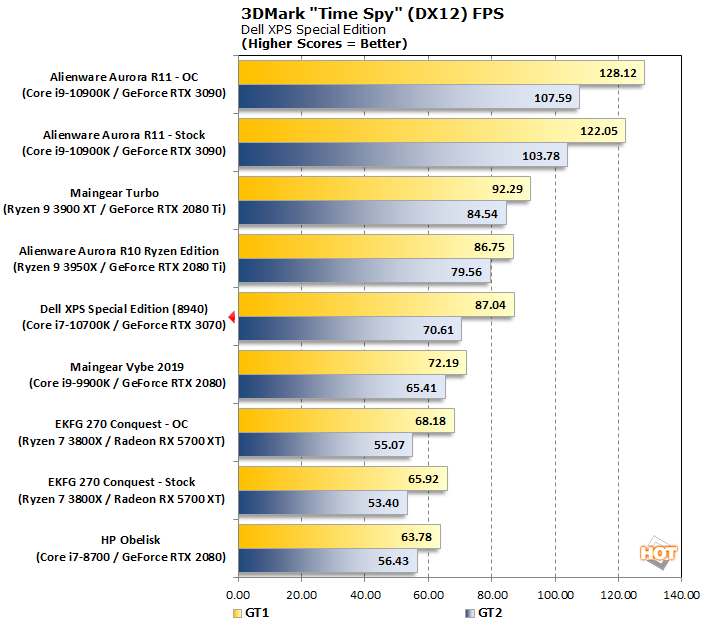 Our standalone GeForce RTX 3070 review is a bit of a spoiler when it comes to evaluating desktop configurations built around the GPU, though it also sets up our expectations and gives us a reference point. Simply put, the Geforce RTX 3070 performs roughly in line with a GeForce RTX 2080 Ti, winning some and losing some, though rarely by very much in either direction. And that is what we see in our Time Spy test run—the XPS Desktop Special Edition came in just a little bit behind the Alienware Aurora R10 Ryzen Edition (Ryzen 9 3950X + GeForce RTX 2080 Ti) and Maingear Turbo (Ryzen 9 3900 XT + GeForce RTX 2080 Ti) overall. This is exactly what we also observed in our standalone GPU review.

Now it's time to move on to our gaming tests. Playing the latest AAA games at high resolutions and detail settings is one of the reasons you might want consider this desktop (as configured) in the first place... 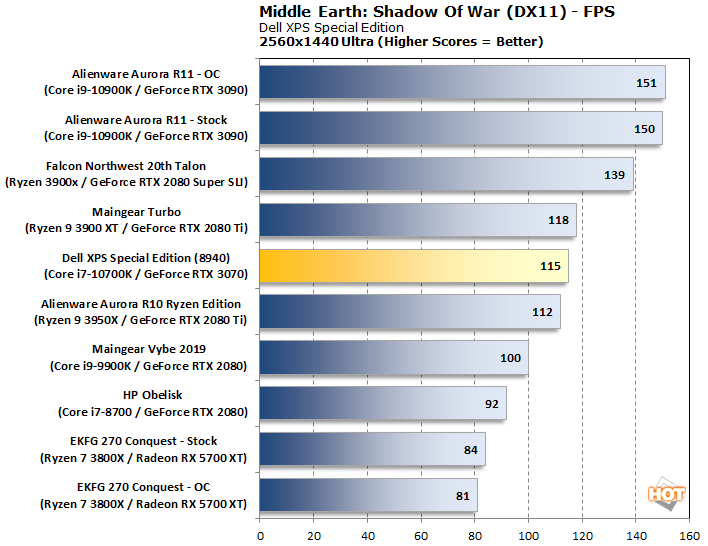 The XPS Desktop Special Edition wedged itself in between the two aforementioned desktops with a GeForce RTX 2080 Ti, further underscoring how it and the GeForce RTX 3070 trade blows. It also came relatively close to the Falcon Northwest 20th Talon with a pair of GeForce RTX 2080 Super cards in SLI. Comparisons aside, this a game that Dell's system can push into triple-digit framerate territory at 1440p and Ultra settings.

We were not content to only run 1440p, however, so here's a small (but growing) sample of 4K resolution performance metrics...

When we cranked the resolution to 3840x2160, the XPS Desktop Special Edition managed 72 frames per second. That puts it above the 60 fps mark that gamers strive for, with some breathing room for when the action gets busy. Getting above 100 fps at this resolution and with Ultra settings would require a beefier GPU, with the GeForce RTX 3090 so far being the only one to accomplish that feat. 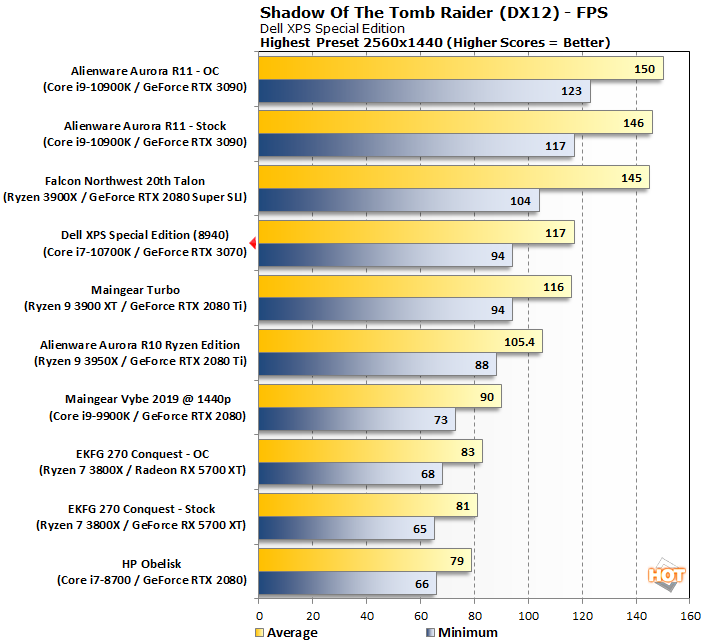 A similar story presented itself in Shadow of the Tomb Raider, with the XPS Desktop Special Edition nudging ahead of both systems that have a GeForce RTX 2080 Ti. This is another game where triple-digit framerates at the Highest preset are possible with this desktop.

Since this is another title we only have expanded comparison 1440p numbers for, we also took a sampling at 4K...

Pushing 4K at the highest preset is a bit more challenging, though once again, the XPS Desktop Special Edition hits and exceeds the 60 fps mark when looking at the overall average. The minimum framerate dipped a little below, to a still decent 52 fps. Not at all bad, especially for a desktop that is not explicitly designed just for gaming. 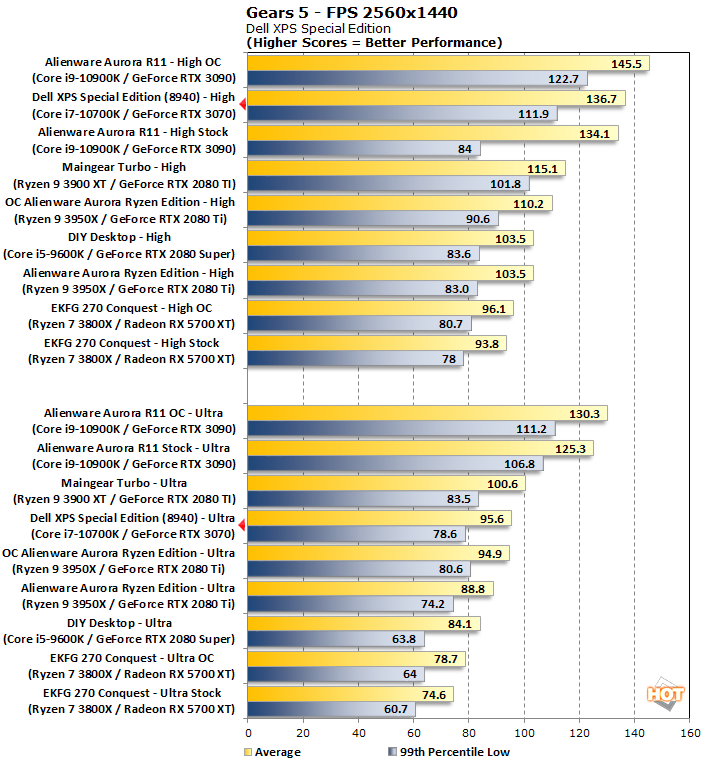 We have two sets of numbers for Gears 5, as we ran this on at both High and Ultra settings, and recorded the results. At the High preset, the XPS Desktop Special Edition did exceptionally well—shockingly well, in fact, as it pulled ahead of the Alienware Aurora R11 at stock settings. This is an odd result, as the GeForce RTX 3070 has no business outpacing a GeForce RTX 3090. It could be a driver update that boosted results, or perhaps something held back the Aurora. Either way, we ran this benchmark several times over the course of multiple days, and the results were always similar.

When we flipped the switch to Ultra, the framerate measurements landed more in line with our expectations, settling in around the same place as other systems with a GeForce RTX 2080 Ti. The XPS Desktop Special Edition did not quite break 100 fps, but it came impressively close. 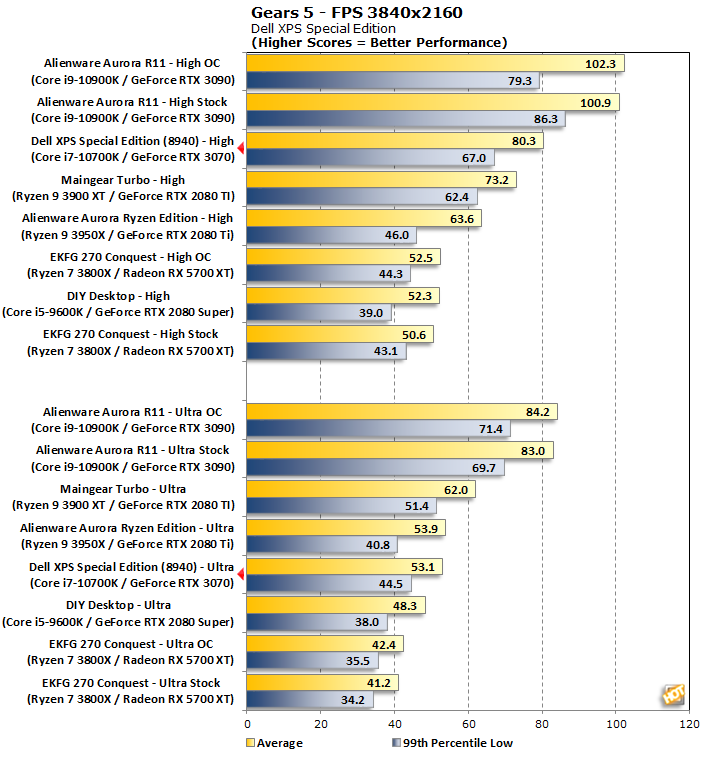 Here again, the XPS Desktop Special Edition took a performance hit when cranking the resolution to 4K, while still churning out playable framerates, especially at the High preset. It averaged a tick above 80 fps at High, and 53.1 fps at the Ultra preset. 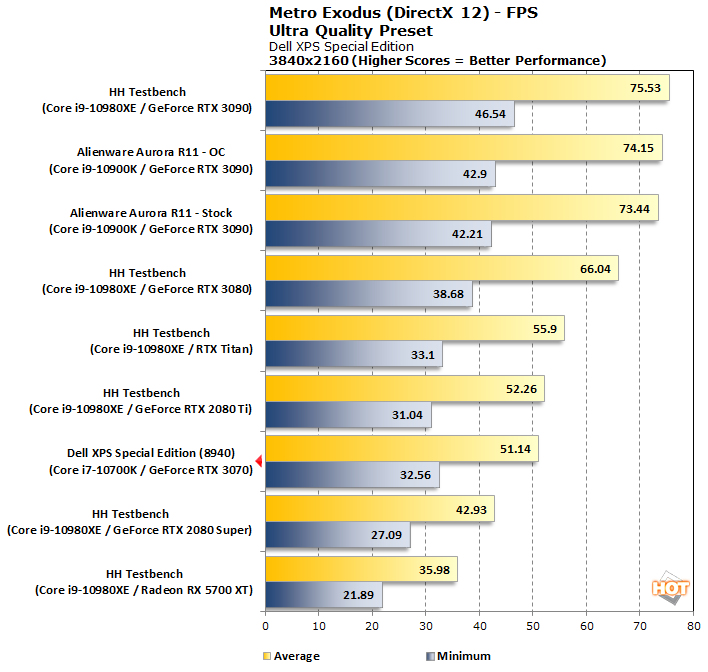 We kicked off our Metro Exodus benchmarking at a 4K resolution using the Ultra preset, and with both ray tracing and DLSS disabled. Unfortunately we do not have a large collection of prebuilt systems to compare against—just the Alienware Aurora R11, so we also plugged in some figures obtained from our own testbench. In this round, Dell's XPS Desktop Special Edition performed on par with our testbed housing a Core i9-10980XE and a GeForce RTX 2080 Ti, both of which hurdled over 50 fps by a little bit. 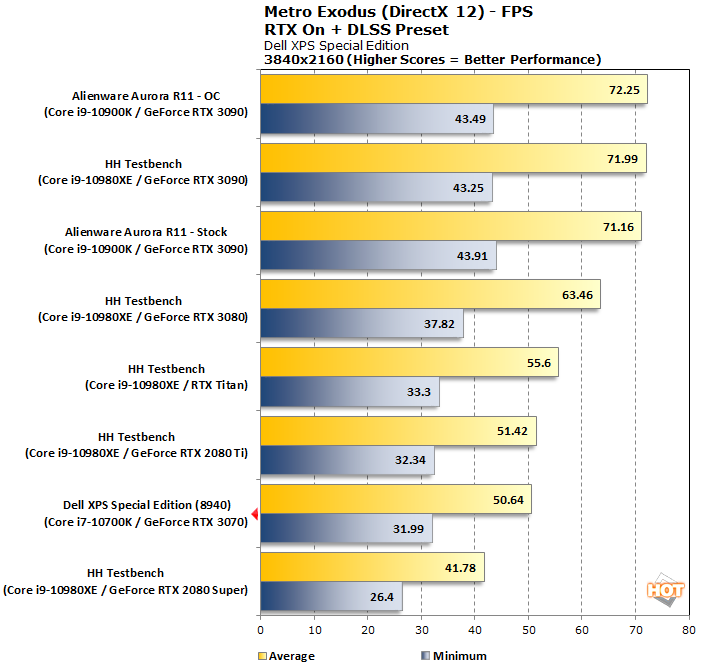 For our second round of testing in Metro Exodus, we enabled ray tracing and turned DLSS on. And once again, the XPS Desktop Special Edition landed right in line with the aforementioned testbed, with less than a single frame separating the two. Utilizing DLSS, we essentially get to enable ray tracing for added visual splendor, without a meaningful performance hit. Good stuff.