If there is one thing we can count on whenever hot new component hardware arrives, it's that it will not be long before Dell integrates it into their Alienware gaming systems. So naturally, with the release of Nvidia’s latest and greatest GeForce RTX 3080 and 3090 graphics cards, it was no surprise to see Alienware desktops already shipping out with these cards on deck. The Alienware Aurora R11 we have in our lab today features Dell's highest-performance configuration with an RTX 3090 to create what representatives at Dell are calling a “Benchmark Bruiser.”

We will, of course, get to those benchmarks, but first let’s get familiar with this new Alienware machine itself. Starting with the specs, this beast’s headlining feature (in the configuration we were sent) is the Nvidia GeForce RTX 3090. This “BFGPU” flexes 10,496 CUDA cores, 82 second generation ray-tracing cores, and 24GB of GDDR6X with a wide 384-bit memory interface. It has no equal in Nvidia's lineup and it remains to be seen if the just-announced AMD Radeon RX 6900 XT can approach its performance level. 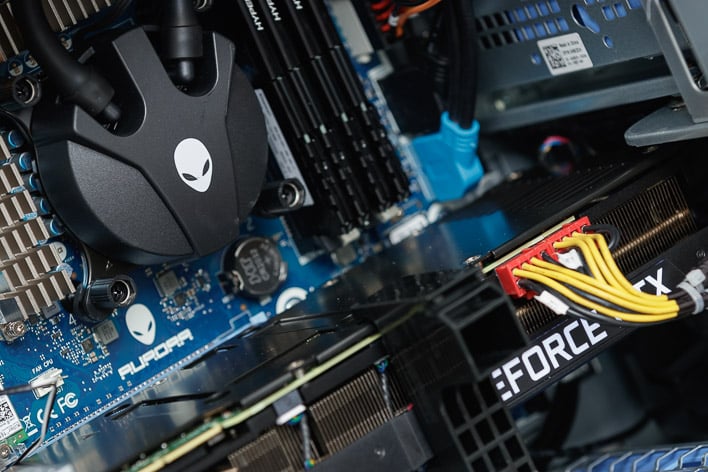 Our test configuration is joined by Intel’s excellent Core i9-10900K processor. The Core i9-10900K is a 10-core, 20-thread chip with very strong single-threaded performance for the best gaming experience possible in Intel's line-up. While there are processors with stronger multi-threaded potential, the Core i9-10900K is plenty potent for both high-end gaming and creative professional workflows, for buyers seeking a system for work and play. 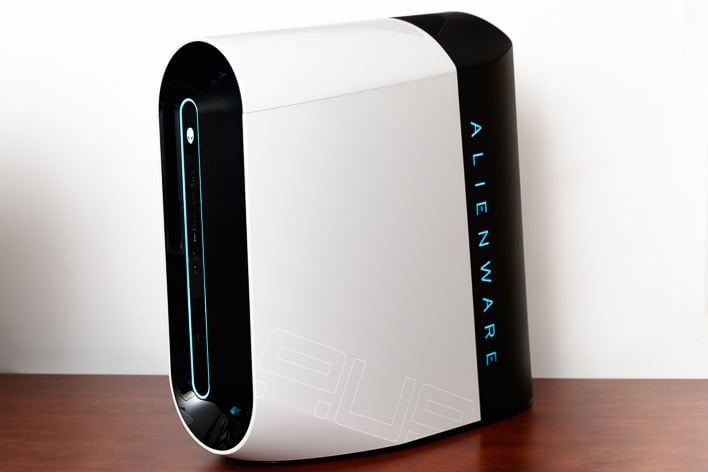 A Tour OF Alienware Aurora R11 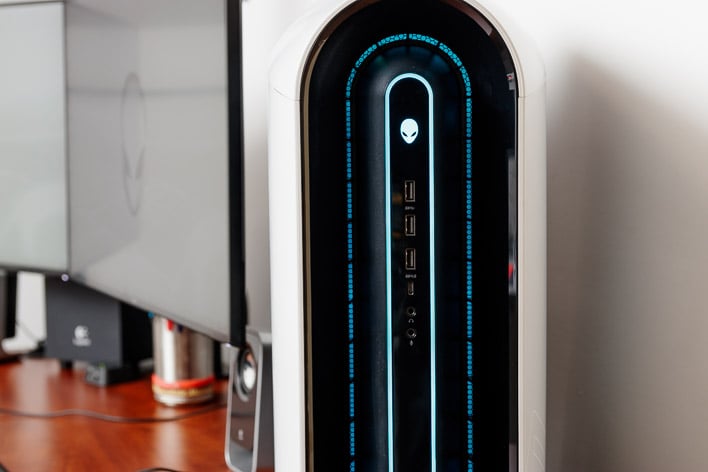 The chassis uses the same sleek design introduced with the Aurora R9. The front panel is modeled after an elongated jet engine intake or perhaps a linear aerospike engine. Either way, the system evokes an impression of speed. In the center strip of the panel, we find the Alienware logo-shaped power button, three USB-A 3.2 Gen 1 5Gbps ports (one of which has Powershare), a USB-C 3.2 Gen 1 port (also with Powershare), a headphone-out jack, and a microphone-in jack. 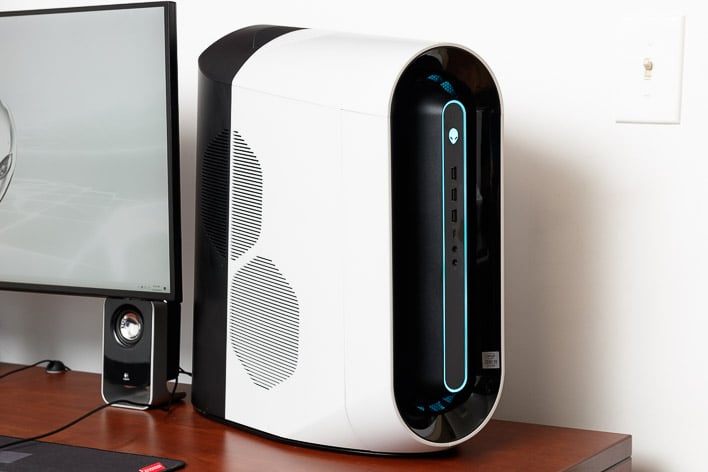 The left side panel is interrupted only by a pair of hexagonal intake vents. These are joined by a third hexagonal exhaust vent at the top of the system. The right side lacks ventilation. Instead, there is an LED-lit ALIENWARE inscription and a stylized, screen-printed AUR. The entire exterior of the chassis is sheathed in molded plastic. 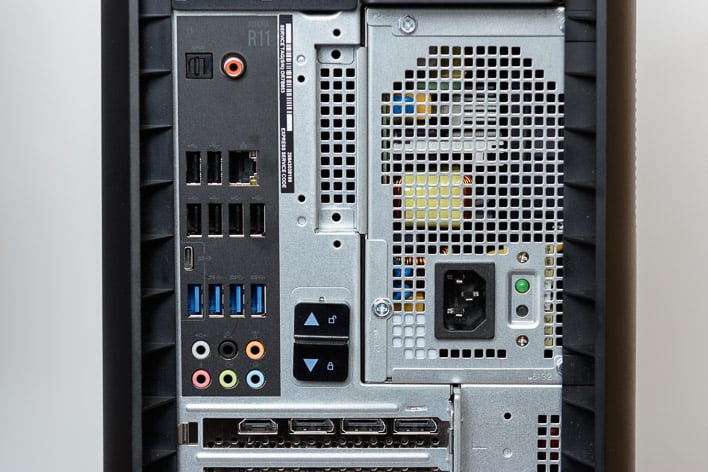 Accessing the interior of the Aurora R11 is very easy. The system ships with a screw to hold the side panel release in place during transit. Once that screw is removed, simply pull the release and the left side panel pops off. The inside reveals an unpainted steel chassis and a reminder that on this inside, this is not a boutique build. 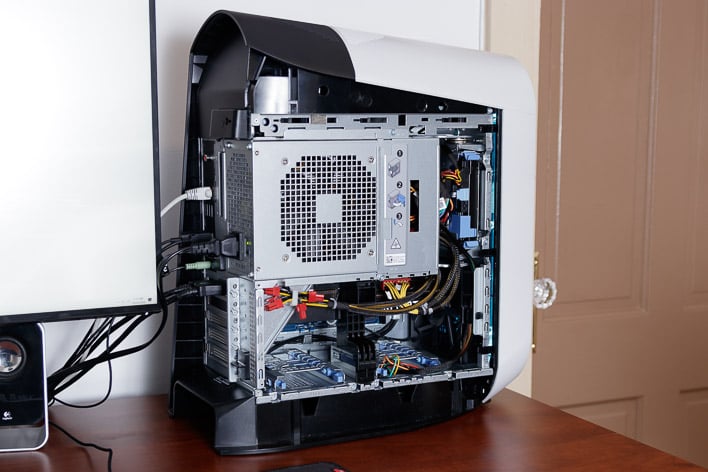 At this point, the power supply largely obstructs our view of the interior. Positioning the power supply above the CPU like this could present an issue with an air-cooled system, but it should be no problem with Alienware’s AIO liquid cooler. The system’s hard drive is tucked away with a quick release bracket just to the right of the power supply. 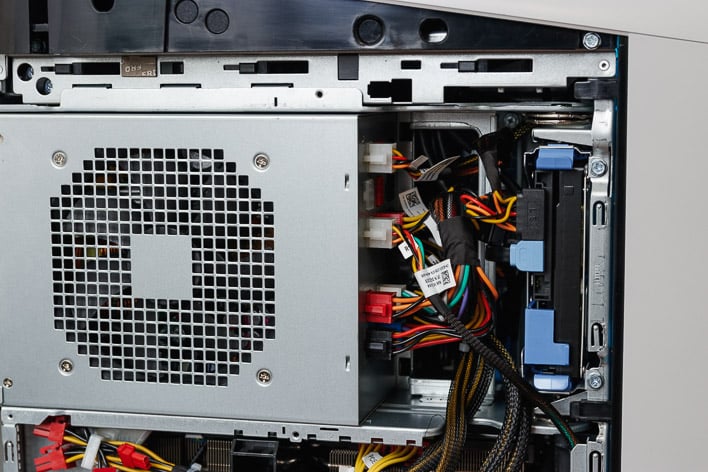 The power supply is fully modular. This means if users can remove the unused cables to minimize clutter if they wanted. Still, we appreciate their inclusion to facilitate potential future upgrades for novice installers. The extra cables are also less likely to go missing when they are needed than if they shipped a la carte in a separate box. 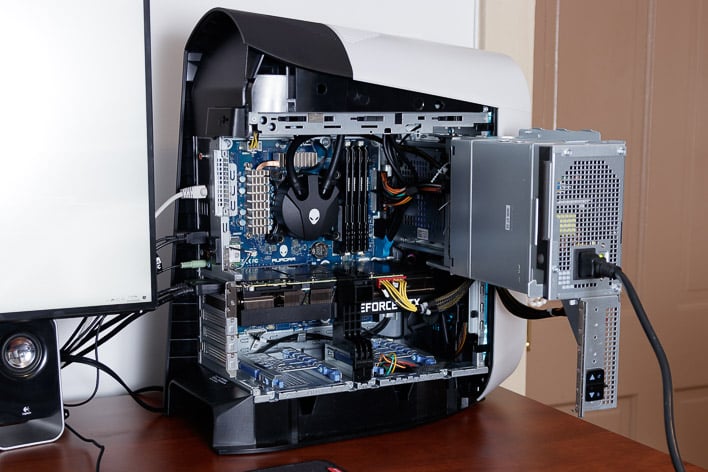 The power supply can be swung open after unlocking two switches in the rear. This provides much better access to the graphics card as well as exposing the CPU cooler and RAM. Overall cable management is just acceptable, though. The bright red and yellow colored cables make their routing more obvious than all-black or nicely sleeved cables would be. 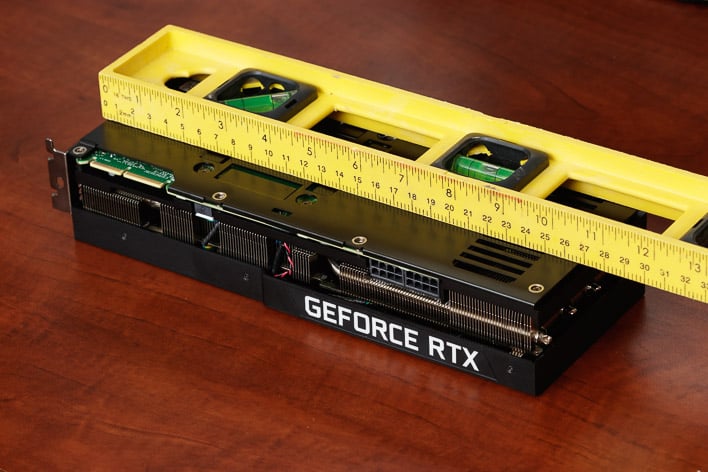 We will quickly pop out the GeForce RTX 3090 here because Dell has done something a little bit special. The RTX 3090 Founder’s Edition not only puts up big numbers, but is itself a big card. Dell’s custom RTX 3090, on the other hand, is effectively the same size as their RTX 3080. It measures in at just 10.5 inches long and about 4 inches deep. The Founder’s Edition is 12.3 inches long and 5.4 inches deep, for reference. The Founder’s Edition also consumes a full 3 PCI-e slots while Dell’s RTX 3090 gives half a slot of breathing room. Whether this size difference impacts performance or not will be explored in our benchmarks. 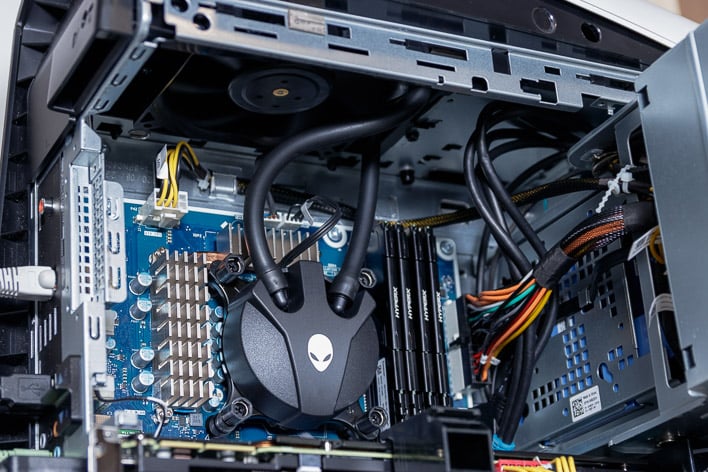 Meanwhile, the CPU block pipes liquid to and from a 140mm radiator. This should be technically sufficient for cooling the Core i9-10900K, but we would prefer to see a larger 240 or 280mm radiator. These configurations allow the fans to operate more quietly while offering superior cooling capacity. In addition, the power supply does restrict some of the airflow reaching this fan when closed.

We will explore thermals and acoustics next...
NEXT PAGE