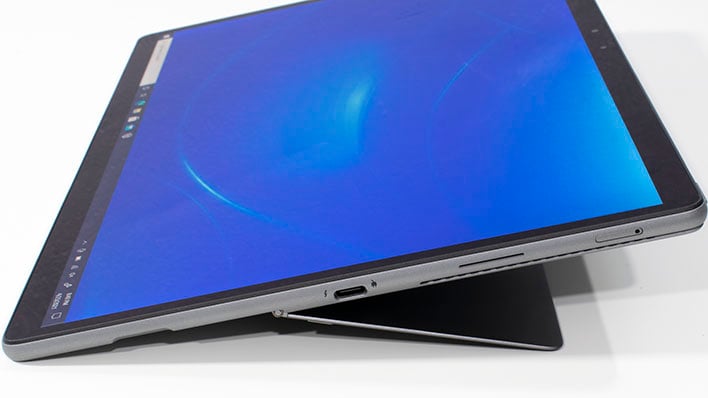 To test the Dell Latitude 7320 Detachable, we ensured it was using the default power plan and installed all of the latest updates via Windows Update. The Windows power slider was set to "Better Performance", and we tested with the machine's default desktop resolution at 1920 x 1280, which is the native resolution for this display. We ran each test a minimum of three times and reported the median result. 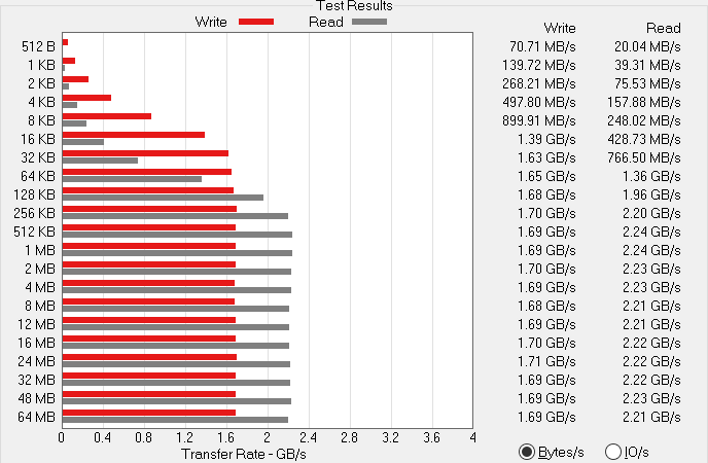 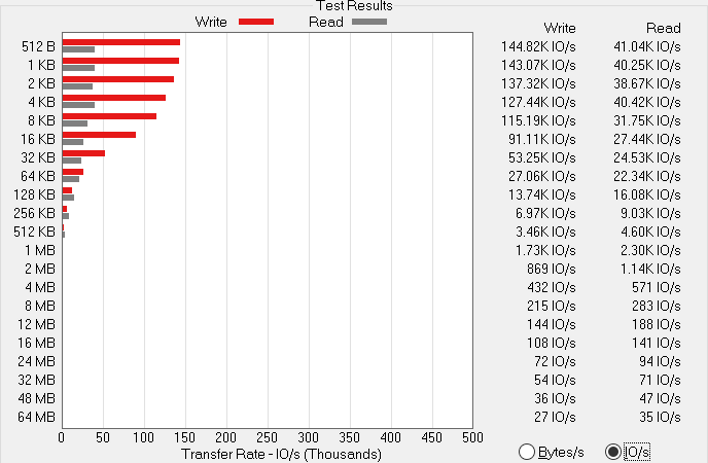 The solid-state storage in the Latitude 7320 Detachable is a Kioxia 1 TB BG4 series drive that uses Toshiba 96-layer BiCS flash on an M.2 2242 card. Performance is excellent, as it breaks 2.2 GB per second in sequential reads and 1.9 GB per second in sequential writes. IO performance on the write side is exceptional, breaking 140k IOPS early on, and dropping as transactions get larger. Read performance is also acceptable, and the system always feels responsive. 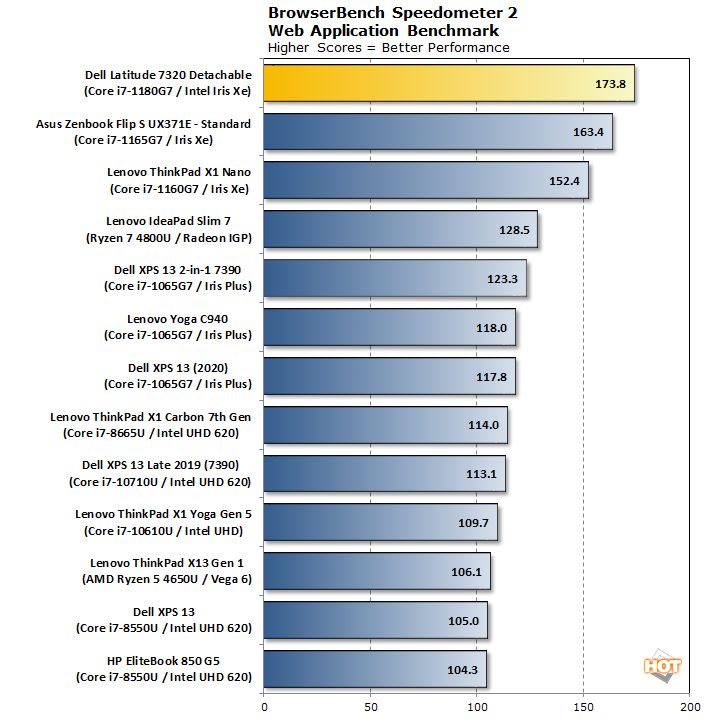 Web browsing performance is inherently lightly-threaded, since most web work is related to modifying the user interface, and UI work has to happen on a single thread. As a result, the high boost clock of the Core i7-1180G7 in the Latitude sets a new high-water mark among laptops that we've tested, which is impressive considering its 12 Watt TDP. While it's unrealistic to expect such a thin machine to run like this in the rest of our benchmarks, the bursty nature of this workload allows the Tiger Lake chip to stretch its legs. Subjectively, web browsing was a very smooth experience. Beating out the 15-Watt Core i7-1165G7 in the Tiger Lake-based ASUS ZenBook Flip S is a little unusual, but probably has more to do with software updates since that review, rather than the hardware. 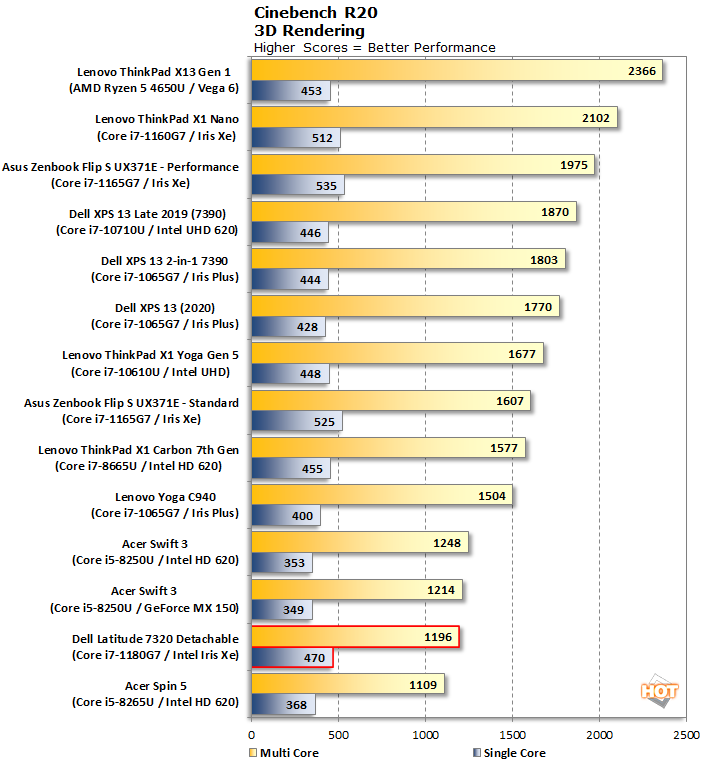 Cinebench R20 is a much heavier load the Speedometer, and the ultra thin and light Latitude 7320 Detachable stumbles. The chart ranking looks abysmal, but if we look closer and observe the single-threaded performance, it's actually quite stunning. It places third overall behind the ASUS Zenbook Flip S and the ThinkPad X1 Nano. Multi-threaded performance is constrained by the 12 W TDP and very thin design of the Latitude 7320. If you're buying a convertible tablet for rendering, however, we'd urge you to reconsider.

Recently, Cinebench R23 burst onto the rendering scene (heh), boasting new features like a sustained test and native support for Apple's M1 SoC found in the recent 2020 Mac mini, MacBook Air, and MacBook Pro. Windows devices also get the benefit of Maxon's latest rendering engine. The score scaling has changed, too, so these scores are not at all comparable to the last iteration. 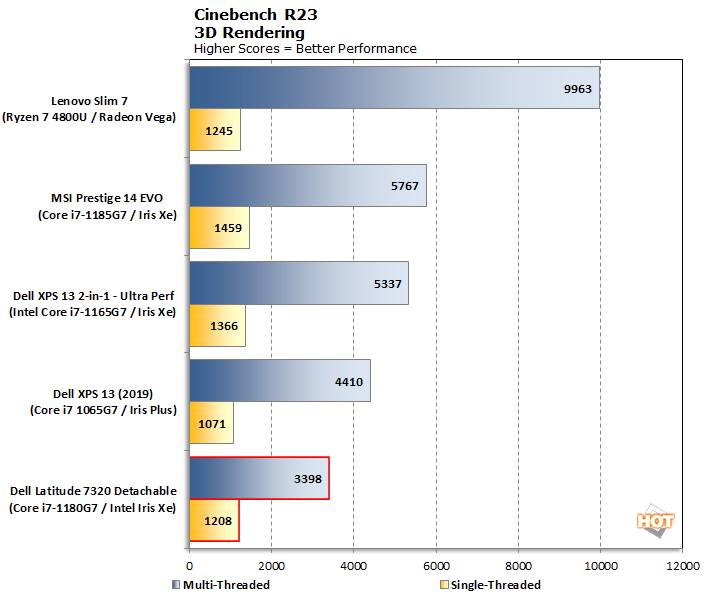 If we look past the numbers and focus on the scaling, Cinebench R23 tells a similar story. It's easy to get fooled by the last-place finish here, but we'd urge caution. Overall, the less-than 3x speedup of multi-threaded tasks hurts the Latitude, causing it to fall behind even the Ice Lake version of the Dell XPS 13 2-in-1, but single-threaded performance is very strong. For the types of workloads Dell designed the Latitude 7320 Detachable to handle, this is exactly what we'd expect to see. 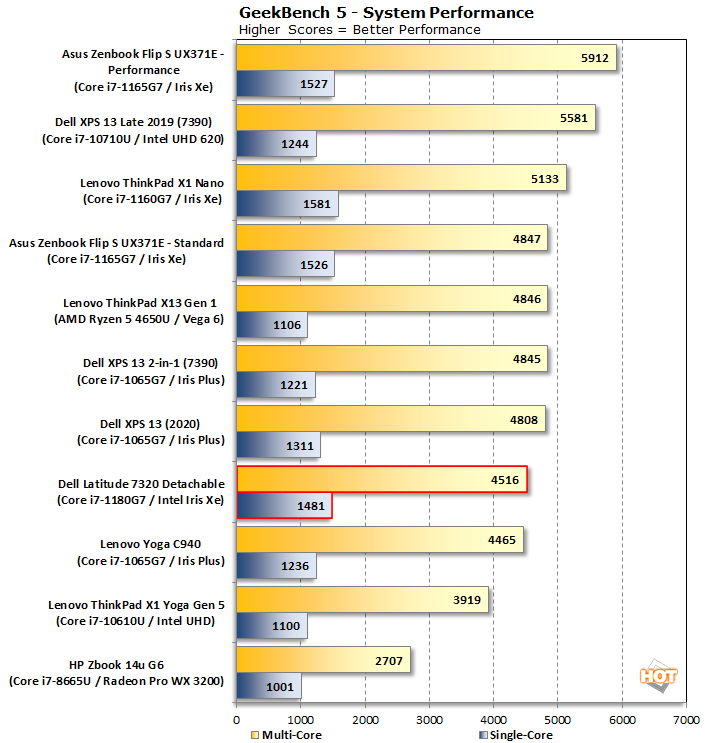 Maybe what's most intriguing about the Latitude 7320's Core i7-1180G7 and its 12 Watt TDP is that it very soundly beats out 10th-gen Ice Lake notebooks like the Lenovo Yoga C940 and its 15-Watt Core i7-1065G7 in single-threaded performance, and even has a slight edge in the multi-threaded arena. Some notebooks like the ASUS ZenBook Flip S can beat it in both single- and multi-threaded tests here, but those notebooks have much more robust cooling and a higher-power CPU. 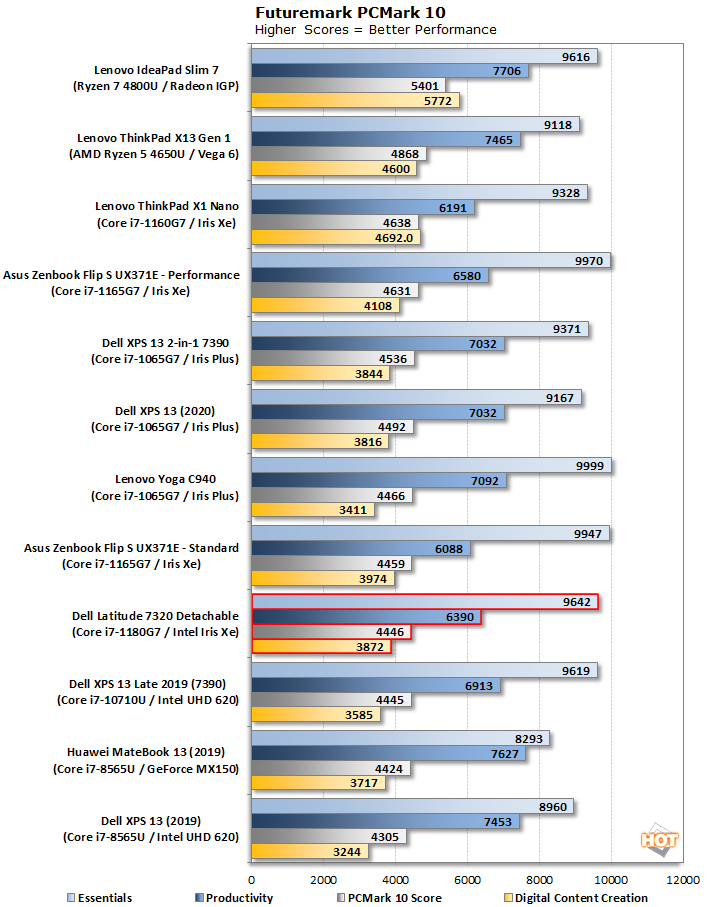 In PCMark, the Latitude scores low, but if we look at the overall scores, it's within a mere five percentage points of just about every notebook on the list, including the third-place Lenovo ThinkPad X1 Nano. All of our ultra-portables on this chart performs similarly, and once again that's a big deal for the extra-thin Dell tablet.

3DMark has several different graphics tests which focus on different types of systems. The most relevant of our tests is 3DMark's Night Raid, which uses DirectX 12 for its graphics tasks and has been tuned for integrated graphics. That means this is more CPU-focused than GPU focused, but still looks pretty nice despite that. 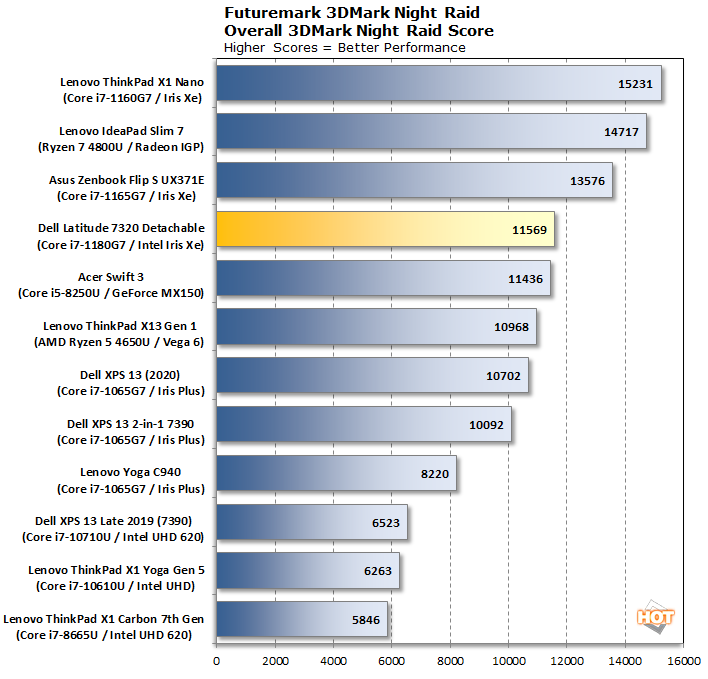 Even with a somewhat lower TDP, the Iris Xe graphics solution in the Latitude 7320 Detachable is capable of beating out AMD's Vega-based Radeon Graphics in the ThinkPad X13 Gen 1 and even the GeForce MX150 in the Acer Swift 3. It's not up to the level of 15-Watt Tiger Lake notebooks like the Asus Zenbook Flip S, but the Dell acquits itself in 3D tasks pretty nicely.

3DMark Fire Strike is a more intensive load that can still make gaming desktop systems work pretty hard. It's probably unfair to run it on integrated graphics, but we include it as a step-up from Night Raid. 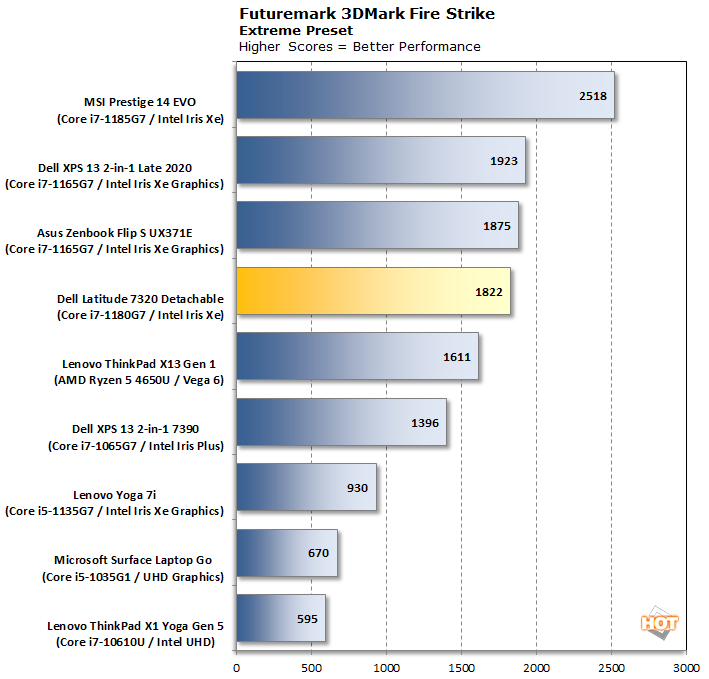 Once again, the Latitude 7320 Detachable -- which is not a gaming device by any means, by the way -- performs pretty well. It's just a step or two behind the 15 Watt Tiger Lake notebooks, at least until they use their high-speed power options. It's also nearly 30% faster than the Ice Lake-based XPS 13 2-in-1, so the lower-power Tiger Lake is a big step up over the last generation.

GRID Autosport is a cross-platform racing simulation developed by Codemasters. The developer wanted to make up for GRID 2, which released to mediocre reviews from critics and gamers alike. Codemasters set out to improve GRID Autosport's handling and environment rendering to make it a true racing simulator. Codemasters also tuned its EGO 3 graphics engine to perform well over a wide variety of mainstream systems, which makes it a great test for systems with integrated graphics. We tested at 1080p with the High image quality preset. 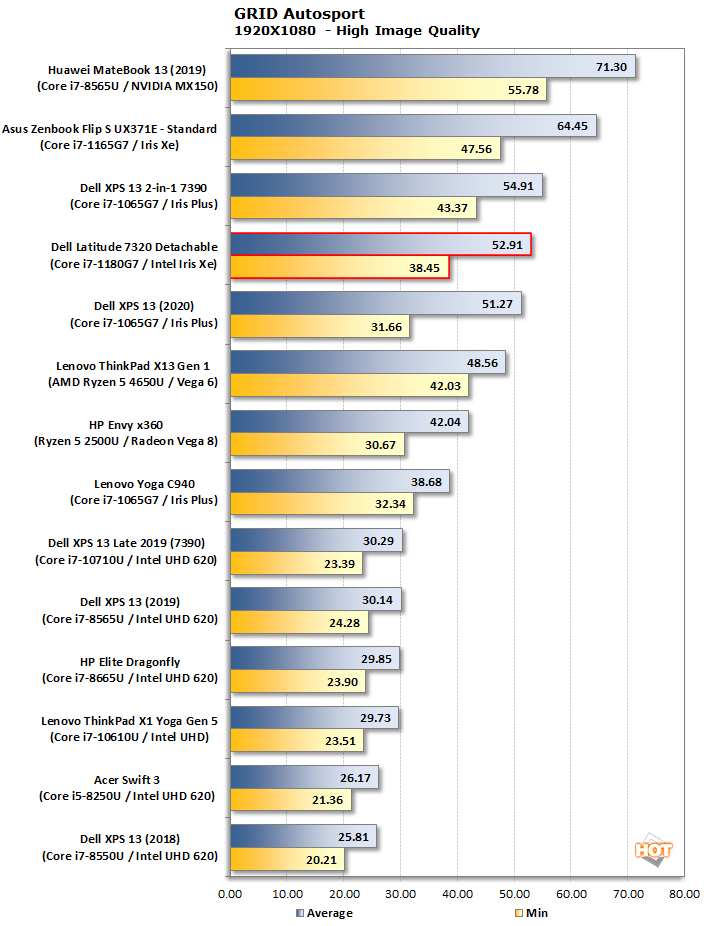 The integrated graphics in the Latitude 7320 Detachable hint at the fact that this is not a gaming device, but older AAA titles like this will probably run quite well all the same. The game is really optimized for a 16:9 display, as playing at 1920 x 1280 on the Latitude's 3:2 aspect ratio actually lets us see less of our surroundings, so we'd recommend playing pillar-boxed. It also improves performance as we're rendering fewer pixels, but with perfect 1:1 pixel scaling at 1080p. It's still much, much faster than anything with the older Gen 9.5 Intel IGP, and even edges out Ice Lake's improved graphics options. That's pretty solid. 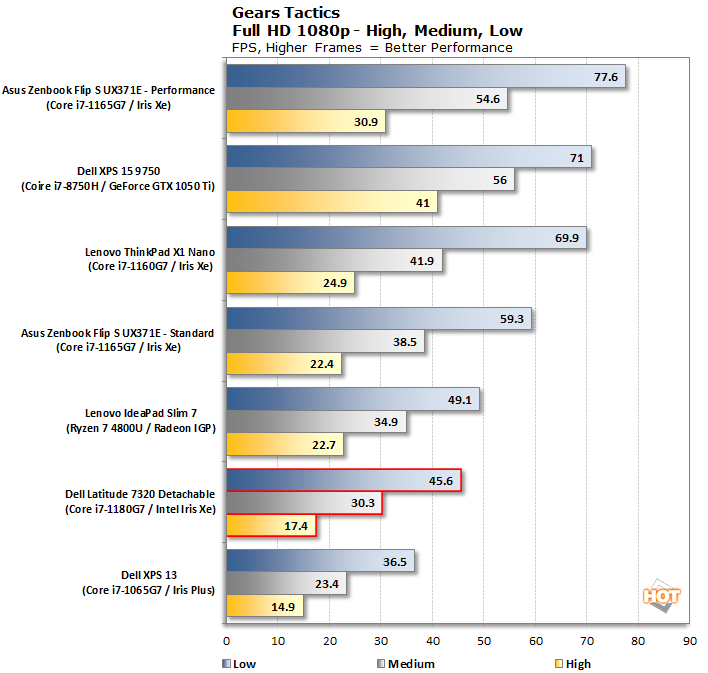 Gear Tactics is completely playable at 1080p and low settings. We won't belabor the point about how this device is not a gaming machine, but road warriors who find themselves alone in hotel rooms on quiet evenings can still play a bit if they're willing to compromise on resolution or settings. The same note about screen resolution applies here. More of the game world is visible at 16:9, and the performance drops a bit once it renders the full 1920 x 1280 display, so playing the game with letterboxing might be the best option.

We run a custom 1080p HD video loop test developed in-house, to prove out battery life with our test group of machines. In all tests, Windows 10 Quiet Hours has been enabled and the displays are calibrated with lux meters on pure white screens to as close to 115 lux as possible. For the average laptop this is somewhere between a 40-60 percent brightness setting. In the case of the Dell Latitude 7320 Detachable, this required lowering the brightness to 18 on the slider in the Windows 10 sidebar. 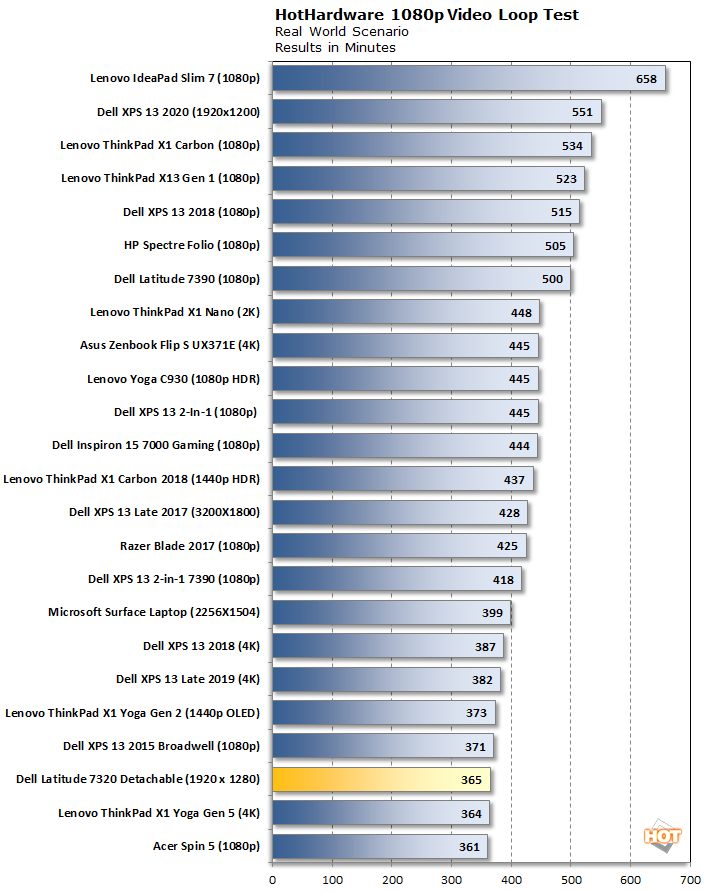 With such a thin form factor, battery performance is so-so. The Dell Latitude 7320 Detachable only has a 40 Wh battery, which is more than 20% less than many of these notebooks that have 50 Wh power packs. If we surmise that adding 25% of power adds 25% to battery life, we can see that the Latitude is pretty energy efficient as it would reach up to around 450 minutes, like the ThinkPad X1 Nano.

The battery isn't 25% bigger, though, so it falls to the bottom of our charts. Six hours is still not too shabby considering the light weight and performance of the Latitude 7320. Dell's reps also told us that by the time these machines hit buyers' hands that the company will have time to get drivers, other software, and the power plan more optimized and squeeze out a bit more life.