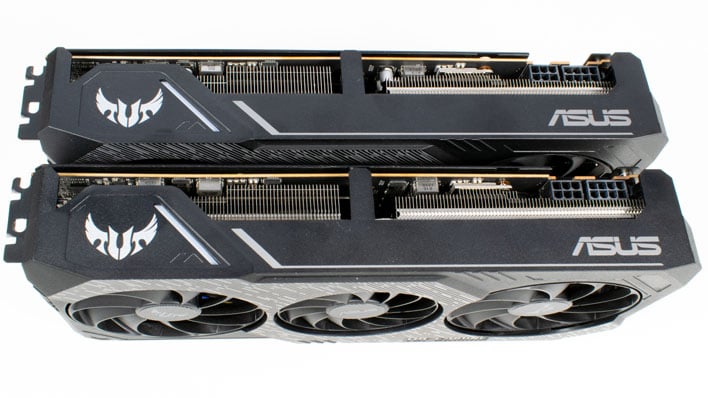 By now, AMD's Radeon RX 5700 family of GPUs is a pretty well-known quantity. The Navi architecture that makes up the current crop of AMD-based graphics cards offers pretty good bang for the buck from the mainstream Radeon RX 5500 XT up to the biggest and baddest Radeon RX 5700 XT, thanks to aggressive pricing and the economics of TSMC's latest 7-nanometer manufacturing process. We were pretty impressed with Navi when it initially launched, and partner cards sweetened the deal with higher clocks and better acoustic performance.

Unfortunately, ASUS's earliest Radeon RX 5700 designs from the ROG Strix brand came under scrutiny because they ran hot under load. The company itself issued a bulletin explaining its side of the situation, which laid the blame at AMD's feet. ASUS said the cards' coolers were torqued to AMD's specs, and offered a free service to correct the issue starting in April. Whoever is to blame, ASUS corrected that issue, and also upgraded the cooling solution in its cards.

Today we'll look at a pair of those upgraded coolers as part of the TUF Gaming X3 Radeon RX 5700 EVO and RX 5700 XT EVO. The headlining feature intended to separate these cards from other designs is a much beefier cooler. ASUS says these cards have a 44% larger cooler surface area than before, a claim that should show itself in higher clocks, lower GPU temperatures, or both. We'll definitely figure that one out today...


To make it easier to differentiate between the two cards, we've bolded the specs where these two entrants differ on the spec table. In essence, it all comes down to stream processor counts and clock speeds. Both cards feature Gaming and OC modes, but unlike other third-party Radeons that ship with hardware toggles like the PowerColor Red Devil, ASUS's cards use a software toggle in GPU Tweak II. The TUF Gaming X3 RX 5700 XT EVO has a somewhat meaningful 5% gap between Gaming and OC profile GPU speeds, but the less-endowed RX 5700 EVO doesn't see much difference. Those values come directly from the card's specs table on ASUS's website, but a quick check in GPU Tweak II verifies that there's not much to see different with this card. 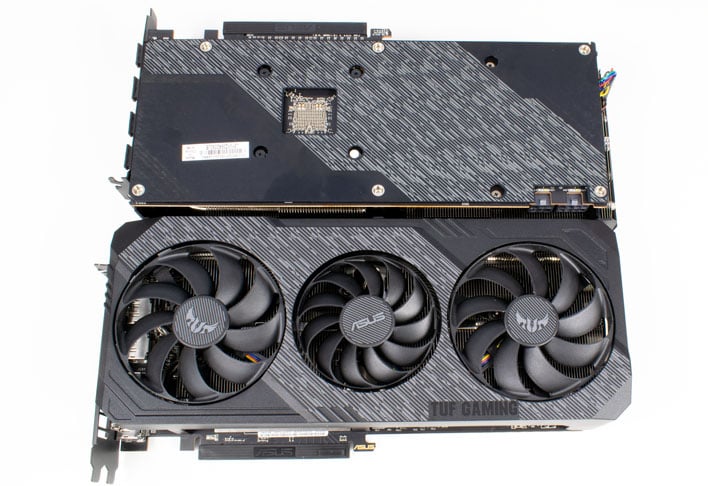 Between the raw stream processor count and clock speed differences, we expect there to be a decent, measurable difference in performance between these cards when the GPU is stressed. The price difference, however, isn't really all that much—a mere $30 separates the ASUS TUF Gaming X3 RX 5700 from its XT sibling. We'll certainly see when we get to performance testing, but it might behoove potential buyers to just pony up for the faster card when we're talking about a 7% price difference. That said, more options are always welcome, and hitting two price and performance points only brings variety for folks to choose from.

Where these cards are similar is in their physical appearance and layout. Both TUF Gaming X3 EVO cards feature a triple-fan cooler where the middle fan is a bit smaller than the others. All three fans have ASUS's Axial Fan technology, which aims to minimize the size of the hub while maximizing static pressure. High static pressure pushes more air through the heat sink and should, in theory, keep the cards cooler. Since that was a key criticism of earlier ASUS Radeon cards, this is is good news. These ASUS cards also shut off their fans entirely when temperatures drop below 55 C, so when the system is idle or when games don't push the GPU very hard, the system stays silent.

To aid in cooling, ASUS gave these cards a heat sink with generous proportions. The fin array stretches the entirety of the card's 11.13 inches (282.6 millimeters) and has direct contact points for both the GPU and the voltage regulation circuitry towards the rear of the card. The heat sink is one big unit joined together by a pair of heat pipes that carry heat from the hot spots to the fins for the fans to disperse. There's also a full-length back plate to protect the rear of the card and disperse a bit of heat of its own. When the fans are spun down at idle, this plate gets pretty warm to the touch. 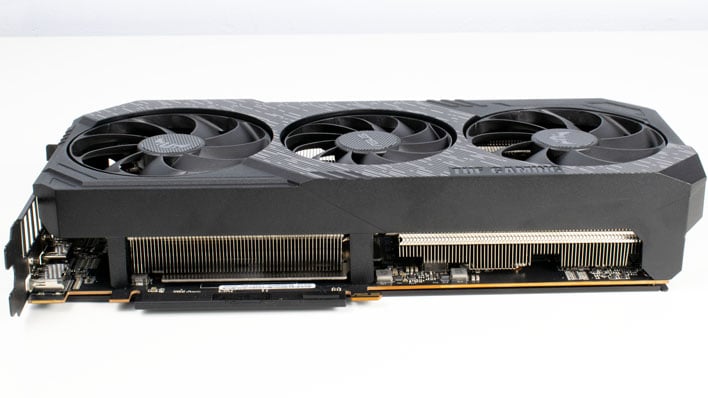 Both cards require the same 8+6 pin PCI Express power connectors. Between the 75 W provided by a PCIe x16 slot and 225 total watts provided by the power leads, that means the card is clear to draw upwards of 300 watts under load. Since the Radeon RX 5700 GPU in the cheaper card has fewer stream processors and lower clock speeds, it presumably doesn't need quite as much power to do its work as the Radeon RX 5700 XT, but the shared design includes the power requirements. ASUS recommends a 600 W power supply for both cards, but hopefully they don't draw anywhere near that much juice in normal loads.

ASUS brags that TUF cards are built tough like the name implies, and go through a 144-hour test before being shipped out. This includes game compatibility as well as a burn-in or torture test to verify that the cards work as they should under an extended, sustained load. Both of these cards come with a three-year factory warranty, too.

The TUF Alliance is ASUS's branding for a whole slew of hardware, most of it made by ASUS, and the company verifies compatibility and unifies the design language among those components. Completely by chance, our test rig has an ASUS TUF X570 Gaming Plus Wi-Fi motherboard, and the shared design language and branding is aesthetically pleasing, even if it doesn't mean much for functionality. A small LED strip on the side of the cooler isn't RGB, addressable, or controllable with any software, but doesn't look out of place in our setup. More functional are the LEDs next to the power plugs that glow red when disconnected or white when PCIe leads are plugged in. 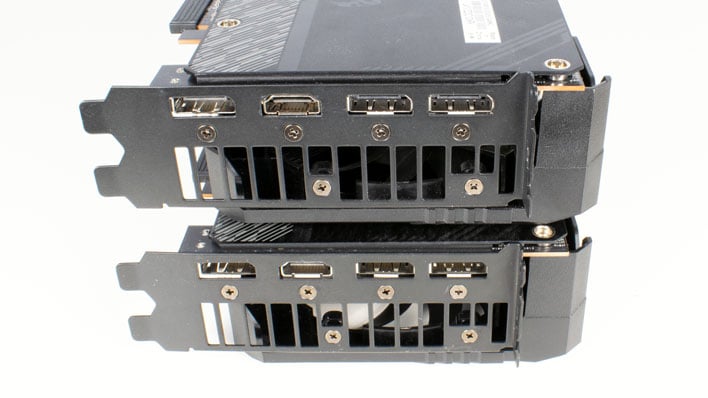 Around the back of the cards, both Radeons have a trio of DisplayPort 1.4 connectors and a lone HDMI 2.0b port. This should be plenty of connectivity for most scenarios. However, on the off chance that a VR headset owner has their PC plugged into an HDMI-equipped UHD 4K TV, using a DisplayPort to HDMI connector might be in order. Since Radeons support FreeSync by both HDMI and DisplayPort, pretty much any FreeSync-capable monitor can plug into any of the outputs. FreeSync even worked correctly with a Pixio PX275h when plugged into our AV Access HDMI 2.0 KVM switch, too.

ASUS provides the GPU Tweak II utility for switching profiles and for manually overclocking its graphics cards. The interface has three straightforward panels. The main section allows selecting profiles or manually setting maximum GPU and memory speeds, voltage, power target, and fan speed. This is where we can switch between the OC and Gaming profiles, or select a third Silent Mode which caps the power target at 89% to keep the card quiet.

This screen is also where we verified that the Radeon RX 5700 variant doesn't expose much headroom automatically. Fortunately we could put the screws to both GPUs here. The maximum GPU clock is a pretty unrealistic peak speed of 2.1 GHz on the RX 5700 XT and 2.0 GHz on the RX 5700. The real control is in the power target, which governs power consumption and gives the GPU room to stretch its legs. We'll talk more about performance later on, but our best results were achieved by leaving everything alone except for the power target percentage.

The other panels available are for checking out the card's specifications with GPU-Z and launching third-party tools. GPU-Z works as well here as it does as a standalone app, showing off the graphics card's GPU and VRAM information as well as feature set and clock speeds. The Tools tab has shortcuts for XSplit, AURA Sync, Furmark, and QuantumCloud mining. Both TUF X3 Gaming cards come with a one-year subscription to XSplit Premium and six months of access to WTFast's private gaming servers.

To the left of the main panel is a hardware monitor. This tracks changes over time to a variety of settings, including GPU clock, GPU and memory temperatures, voltages, and even VRM temps. A toggle on this panel enables an on-screen display that includes GPU speed, temperature, and an FPS counter. That part of the OSD is pretty unobtrusive, but it can also add a spot for an image on the right of the screen. This might be useful if you're streaming to Twitch directly from your PC, but it seems like an image there would get in the way during normal gameplay. Fortunately by default, there's no image loaded in that spot, and the placeholder disappears pretty quickly. 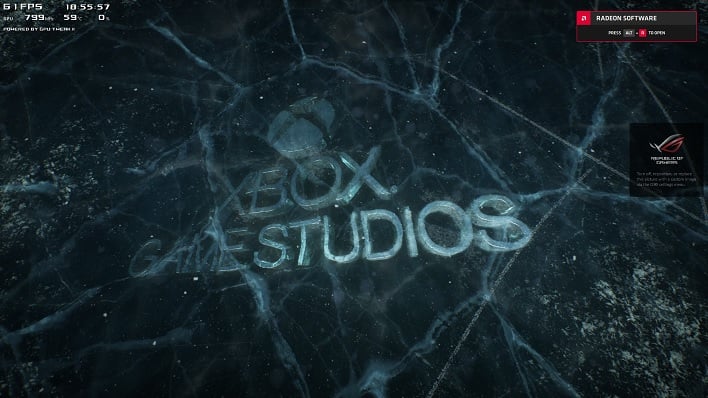