ASUS has been catching heat over uncomfortably high temperatures observed by some users regarding its Radeon RX 5700 XT and Radeon RX 5700 graphics cards. Potentially compounding the issue, AMD is investigating reports of black screen issues affecting its higher end Navi parts. Could the two issues be related? That's not yet clear, but as far as ASUS is concerned, the issue over temps is AMD's fault.
The message is clear if reading between the lines of an ASUS ROG blog post on the topic. ASUS does not come right out and say, "Blame AMD" in those exact words, but does insinuate that AMD's guidelines for what level of pressure is needed when applying a heatsink assembly to a Radeon RX 5700 series card are not sufficient to ensure proper cooling.
"Initial batches of ROG Strix 5700-series graphics cards were built following AMD’s guidelines. After receiving user reports regarding temperature issues, we performed extended R&D testing to find the optimal PSI range for our graphics cards without compromising GPU reliability," ASUS says.
What exactly did ASUS find? ASUS plotted it out on this graph... 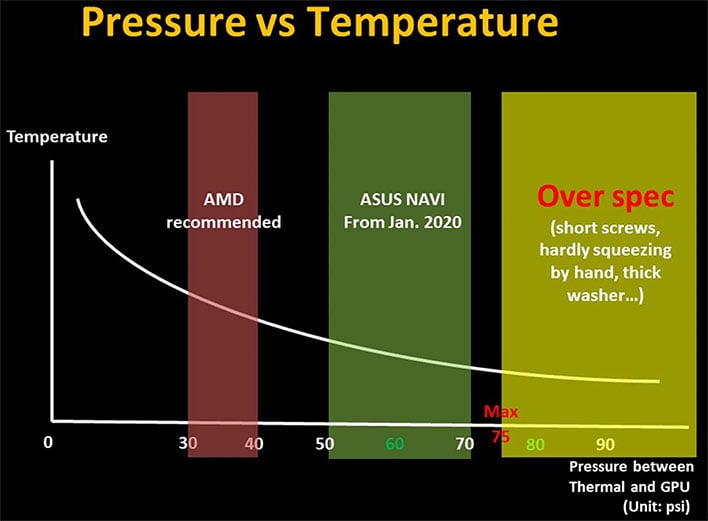 Accoridng to ASUS, during the design phase of new graphics cards, AMD shares documents with its engineers that outline specifications and tolerances for things like this. And in this case, AMD recommended a cooler mounting pressure of 30-40 PSI. That's what ASUS used on its initial batch of Radeon RX 5700 XT and Radeon RX 5700 cards.
Incidentally, there are numerous threads on Reddit complaining about temps on various ASUS-brand Radeon RX 5700 series graphics cards. In addition, Hardware Unboxed chronicled its own issues with some ASUS cards, and confirmed a theory that had been floating around—not enough pressure applied to the heatsink by way of the spring-loaded screws. By adding washers to the equation, the site was able to reduce temps significantly.
"All ROG Strix Radeon RX 5700-series graphics cards shipped from January 2020 forward feature new screws that increase cooler mounting pressure to 50-60 PSI, resulting in improved heat transfer from the GPU to the heatsink," ASUS says.
Therein lies the optimal range, according to ASUS. Why this was not caught beforehand is a good question—it's easy to blame AMD, but this is really something that ASUS should have identified before the initial batches went out.
In any event, cards with new screws that apply the proper amount of pressure are already shipping. If you happen to one an ASUS ROG Strix card from the initial batch, ASUS says you can "contact your nearest ASUS service center starting in March of 2020 and we'll happily perform the upgrade for you."
As to which specific cards are affected, here are the model numbers for the Radeon RX 5700 XT series...
And here they are for the Radeon RX 5700...
The one caveat to all this is that the Coronavirus could affect when your card is able to be fixed, depending on shipments of the necessary components to ASUS service centers.