November 5 will here in a jiffy, and so will a bevy of post-embargo benchmark scores and reviews. While we sit back and wait, the folks at SiSoftware have put together a Ryzen 9 5950X 'review' of sorts, based on scores uploaded to its SANDRA benchmarking database, and like everything else we have seen up to this point, it crushes the competition.
Not that anyone should be surprised. The Ryzen 9 5950X is a 16-core/32-thread hunk of heavy metal with a 3.4GHz base clock and 4.9GHz max boost clock. It also has 64MB of L3 cache and 8MB of L2 cache, and a 105W TDP. And of course it is based on AMD's latest Zen 3 architecture, which the company claims delivers a 19 percent IPC improvement over Zen 2.
Before we look at the SANDRA benchmarks, bear in mind that these are not results obtained by SiSoftware, but scores that "do not appear to be false/fake."
"The article contains only public information available elsewhere on the Internet and not provided under NDA or embargoed. At publication time, the products have not been directly tested by SiSoftware and thus the accuracy of the benchmark scores cannot be verified," SiSoftware says.
Disclaimer out of the way, let's have a look at some of the results in SiSoftware's roundup... 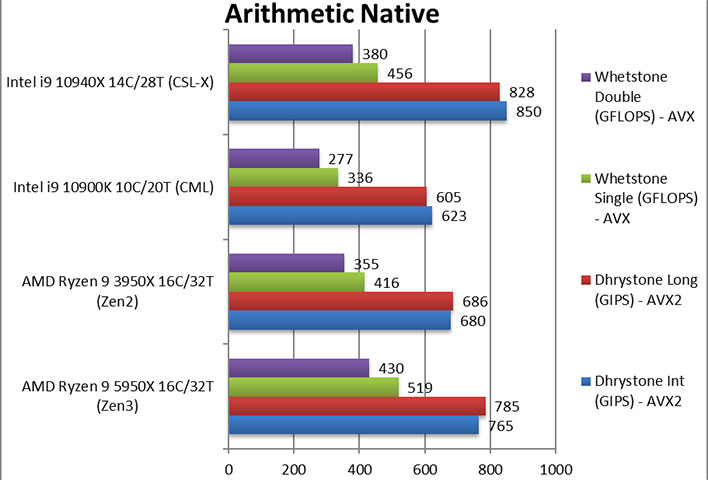 Higher scores are better, and in the Arithmetic benchmark, the Ryzen 9 5950X posts a 13 percent victory over the Ryzen 9 3950X, in the Dhrystone Integer (GIPS) portion of the test. However, it falls behind Intel's Comet Lake and Cascade Lake-X parts.
The gap widens when looking at Nativie FP32 (Float) Whetstone and Native FP64 (Double) Whetone, with the Zen 3 CPU outpacing Zen 2 by 25 percent and 21 percent, respectively. Zen 3 also propels ahead of Intel in those benchmarks, winning by a massive 54.5 percent in FP32 and 55.2 percent in FP64, compared to the Core i9-10900K. 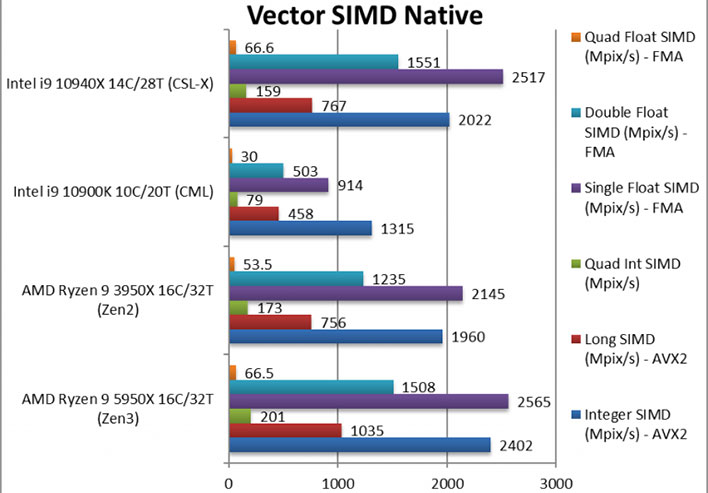 In the Vector SIMD testing round, the Ryzen 9 5950X posts more consistent wins, both against the Ryzen 9 3950X and Intel's Comet Lake and Cascade Lake-X chips. Compared to Zen 2, the individual benchmarks show Zen 3 performing up to 37 percent better in this benchmark.
The rest of the roundup plays out similarly, save for the Image Processing Native benchmark, where the Core i9-10940X (Cascade Lake-X) comes out ahead more often than not in the eight individual tests. However, compared to Zen 2, it is a clean sweep for Zen 3, with victories ranging from 14 percent to 37 percent.
There are different ways to interpret the results as a whole. We don't imagine that many people are configuring Cascade Lake-X builds these days, which put up a solid fight in this roundup (it's also a high-end desktop, or HEDT, platform). Most of its victories, however, came in a single round of testing, comprised of several individual tests. Even still, the Ryzen 9 5950X notched more victories overall across the entire gamut of benchmarks.

Against the Zen 2 part, the performance advantage of Zen 3 is more clear. And in many cases, the gap between the previous generation flagship and this generation's flagship is often higher than the claimed 19 percent IPC bump (*these results are not indicative of IPC).
"About the only issue is that it is still stuck with 2-channel DDR4 memory that even at high speeds (e.g. expensive 4266Mt/s) cannot feed 16-cores / 32-threads in streaming algorithms despite the absolutely massive 64MB L3 cache. Intel’s HEDT platform with 4-channel DDR4 + AVX512 is able to beat it in those kinds of algorithms," SiSoftware says.
So that's interesting. In any event, based on these results, SiSoftware gave the Ryzen 9 5950X a 10/10 verdict for what's that worth. Stay tuned for the post-embargo reviews, which will paint a more thorough picture of where things stand.