We've said before that AMD really hit its stride with Zen 3. The Zen architecture as a whole put AMD back in the enthusiast discussion in a big way, and it has continued to make improvements at the silicon level. That is set to continue with Zen 4 due out later this year, and rumor has it the next-gen architecture could be an even "bigger deal than Zen 3 was" when it launched.
That's according to people the YouTuber and popular leaker Moore's Law is Dead said he spoke with about Zen 4. In what can be considered a rumor roundup of sorts, he laid out what he's been hearing about Zen 4 with various levels of confidence in the information. Here's a high-level rundown, with items in dark red having a "very high confidence" level, items in light red having a "high confidence" level and considered "not widespread info," and lines in white listed as "mostly confident." 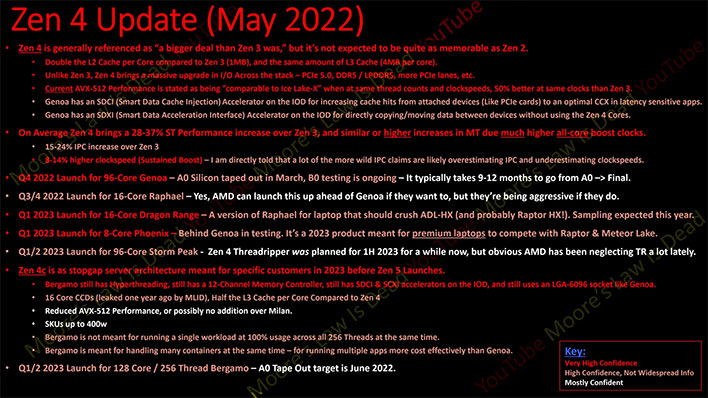 What stands out to us is the claimed uplift in instructions per clock, or IPC. Each subsequent processor generation typically delivers an IPC boost, and we've come to expect that to be in the neighborhood of 15-20 percent. However, Zen 4 could up the ante over Zen 3 to a bigger extent than what past leaks and rumors have indicated.
Overall, the leaker's sources have indicated the IPC gain could be has high as 24 percent over Zen 3. Breaking that down, they say Zen 4's single-threaded performance will be in the range of 28-37 percent higher than Zen 3, and that multi-threaded gains could be even higher with goosing the all-core boost clocks on its Ryzen 7000 series CPUs.
There have been leaks of early Zen 4 samples hitting 5.2GHz. As far as sustained boost clocks, the aforementioned sources are claiming they will be around 8-14 percent higher next round. So we're looking at faster clocks combined with an architectural upgrade, to potentially deliver a bigger performance jump than some might have been expecting.
None of this confirmed, of course. All we really know for sure about Zen 4 is that it will leverage a new AM5 socket with support for PCI Express 5 and DDR5 memory. And more recently, AMD officially announced a couple of Zen 4-based Ryzen 7000 series mobile processors, those being Dragon Range and Phoenix. As always, take the rumors with a big dose of salt.
Looking even further down the line (because there's always something else coming), MLID also talked a little about Zen 5 and Zen 6. Zen 5 is supposedly coming out around 11-15 months after Zen 4 and is rumored to bring an even bigger IPC uplift (it's said the data fabric and cache are being completely reorganized), and Zen 6 is apparently due out by 2025.