AMD Ryzen 7000 Zen 4 Launch: Speeds, Specs, All You Need To Know And An RDNA 3 Surprise

AMD just concluded its “together we advance_PCs” livestream event, during which CEO Dr. Lisa Su and other members of the executive team unveiled the company’s launch plans for the upcoming Zen 4-based Ryzen 7000 series and its associated platform. We were lucky enough to be on-hand for the announcements and have summarized all of the pertinent details for you here.


Two and a Half Geeks Livestream With AMD's Robert Hallock

To date, AMD has disclosed quite a bit regarding the Ryzen 7000 series and the Zen 4 architecture. As many of you will already know, AMD’s goal with the upcoming platform was to offer the fastest CPU core for gamers, and the most compute in the segment for creators. If all of the claims made during today’s stream hold true, AMD appears to have done just that.

Zen 4 is a power-optimized architecture, designed to improve single- and multi-threaded performance, while also improving overall efficiency. Single-thread improvements will come by way of an approximate 13% IPC uplift. That’s somewhat higher than expected, as AMD had previously mentioned an 8-10% IPC uplift for Zen 4. Note, however, that 13% uplift expectation is the geomean of numerous tests. Some applications show much larger increases. For example, wPrime shows a massive 39% uplift, Watchdogs Legion a 24% uplift, and F1 2022 19%. In addition to the IPC enhancements, the processors will also boost to higher frequencies, so cumulative single-thread improvements should be in the neighborhood of 29% versus the Ryzen 5000 series. That’s another huge increase over the 15% AMD had previously disclosed. During the presentation, AMD’s Mark Papermaster mentioned that the bulk of Zen 4’s IPC improvements come by way of increased cache sizes, load store improvements, and optimized branch prediction.

Ryzen 7000 series processors will leverage a similar chiplet design to previous-gen desktop Ryzen desktop processors, with one or two up-to 8-core chiplets (max 16-cores / 32-threads), paired to a new 6nm, lower-power IO die. All told, AMD is claiming “significant generational performance-per-watt and frequency improvements”, though the top end parts will likely consume somewhat more instantaneous power. The first wave of high-end Ryzen 7000 series processors will have a TDP of 170 Watts, though socket power increases up to 230 watts to build some future scalability (and overclocking headroom) into the platform. The overall power story with Zen 4 should be interesting, as a roughly 50% reduction in idle power and the integration of many mobile-first power-savings technologies were also mentioned. As such, despite the smaller dies, which result in higher thermal density, and the smaller integrated heat spreader design, AMD is also claiming improved thermals under many circumstances.

Ryzen 7000 series compute chiplets will be manufactured on a 5nm process node, using 4th gen FinFET technology and an enhanced 15-layer telescoping metal stack. Due to the more advanced process and design optimizations, die area is reduced approximately 18% over Zen 3. Some die size comparisons to Intel’s Alder Lake were also shown, which claimed an approximate 50% area reduction versus Intel; a Zen 4 core and its associated L2 cache require about 3.84mm2 versus 7.46mm2 for Alder Lake.

Some details and performance expectations were also disclosed regarding Zen 4’s AVX-512 implementation. In Zen 4, AVX-512 is implemented using double-pumped 256-bit data chunks. This design decision was reportedly made to avoid large frequency fluctuations when executing AVX-512 workloads. In terms of performance, AMD is claiming a 1.3x improvement in FP32 inferencing workloads versus Zen 3, and up to a 2.5X improvements for Int8.

Ryzen 7000 series processors will be paired to new 600-series chipsets and socket AM5. Socket AM5 uses a new 1,718 pin LGA (Land Grid Array) design but will still be compatible with existing AM4 heatsinks and cooling hardware. AMD reiterated its plan to support AM5 with multiple architectures through 2025 and that the 600-series chipsets would target multiple market segments. As was previously disclosed, the X670 Extreme will be the flagship chipset, which will support PCIe 5.0 for both graphics and storage; the X670 will only support PCIe 5 for storage. A similar strategy was also mentioned for the upcoming B650 Extreme and B650. All told, Ryzen 7000 series processors will feature 24 PCIe Gen 5 lanes, up to 14 SuperSpeed (up to 20Gbps) USB ports, Wi-Fi 6e and Bluetooth LE 5.2 support, and HDMI 2.1 and DisplayPort 2 support.

A new platform feature, dubbed AMD EXPO Technology, to optimize DDR5 memory performance was also unveiled. AMD EXPO Technology offers extended profiles for DDR5 memory overclocking. With a single-click, users will be able to dial-in memory performance (similar to XMP and AMP), for improved latency and bandwith. At launch 15 EXPO-enabled DDR5 memory kits are expected to be available, at data rates up to 6,400MT/s. PCIe Gen 5 SSDs are also inbound for the platform from numerous partners, but those aren’t expected to arrive until the November timeframe.

Base and boost clocks also differ between the processors and are increased significantly over the previous-gen Ryzen 5000 series. For example, the Ryzen 9 7950X will offer a 5.7GHz boost clock, which is a full 800MHz higher than any Ryzen 5000 series part. Cache sizes also differ between the various Ryzen 7000 series processors, with the flagship 7950X offering up to 80MB of combined L2+L3 cache, with the mainstream Ryzen 5 7600X clocking in at 38MB.

During its event, AMD made some bold performance claims versus Intel’s 12th Gen Core processors based on Alder Lake. First and foremost, AMD claims the entire Ryzen 7000 series line-up, including the lower-power, more mainstream Ryzen 7 7700X and Ryzen 5 7600X, will offer better single-thread performance than Intel’s top-end Core i9-12900K. To that end, a Ryzen 5 7600X was shown running F1 2022 side-by-side with a 12900K, and the Ryzen put up an average framerate approximately 11% higher, though both chips were capable of hitting north of 350 FPS in the test. On average, AMD is claiming about 5% better gaming performance with the Ryzen 7000 series versus Intel with the 7600X, with faster parts obviously increasing that lead. 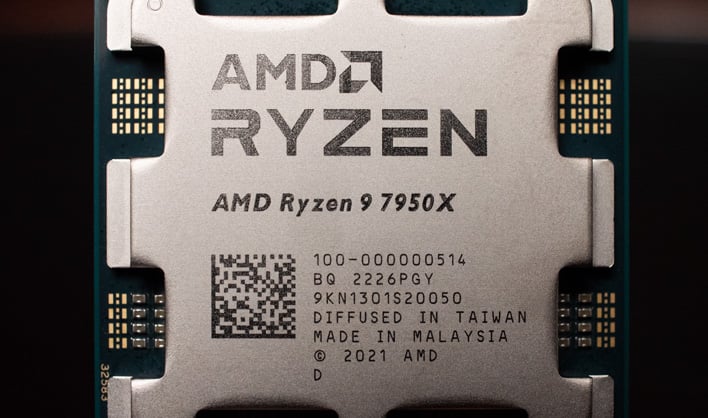 An additional creator-focused demo also pit the Ryzen 9 7950X against the Core i9-1200K in a vRay rendering benchmark. During the demo, the Ryzen 9 7950X hit a score of 30,210, which was about 62% higher than the Core i9. In this particular test, along with the much higher absolute performance, the Ryzen processor offered an approximate 47% improvement in performance per watt according to AMD.

Pricing for the processors will range from $299 for the mainstream Ryzen 5 7600X on up to $699 for the flagship Ryzen 9 7950X, and the processors will be on store shelves September 27. Dr. Su mentioned that AMD expects availability to be good at launch and that the relatively long lead time from today’s announcement to general availability was to help ensure enough hardware makes it into multiple regions across the globe.

Additional Ryzen 7000 series details weren’t the only thing disclosed during the event. AMD reiterated that Zen 4 processors with 3D V-Cache are inbound, in addition to RDNA 3-based Radeons, Zen 4c cloud-optimized processors, and a next-gen XDNA adaptable SoC. And in one of her typical “but wait there’s more” moments, Dr. Su also showed the first public demo of an RDNA 3-based Radeon GPU in action. Upcoming RDNA 3-based Radeons will also leverage a 5nm manufacturing process and feature a chiplet-based design. And in terms of performance, Dr. Su claimed the next-gen GPUs will offer more than a 50% performance per watt improvement over Radeon RX 6000-series GPUs.

In the demo, a pre-production Radeon was shown running the upcoming game Lies of P at 4K resolution with Ultra quality settings at smooth framerates, while installed in a Ryzen 9 7950X-based system. 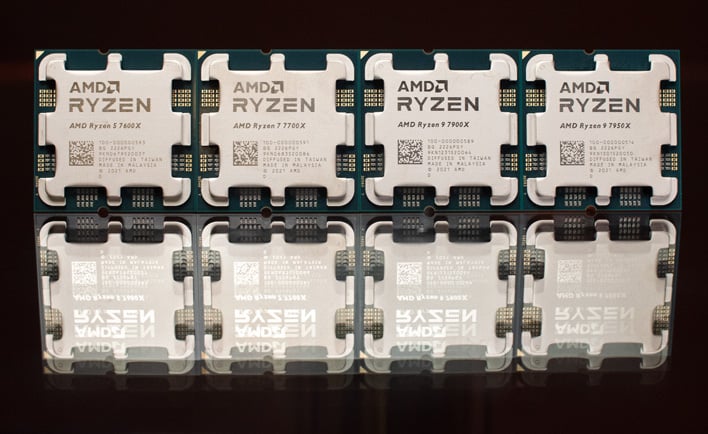 After witnessing everything AMD had in store today, we’re excited to see what the Ryzen 7000 series and all of AMD’s upcoming hardware can do. The excitement from all members of the team was palpable and the various demos and disclosures paint a very positive picture. AMD seem to be firing on all cylinders and shows no signs of letting up.