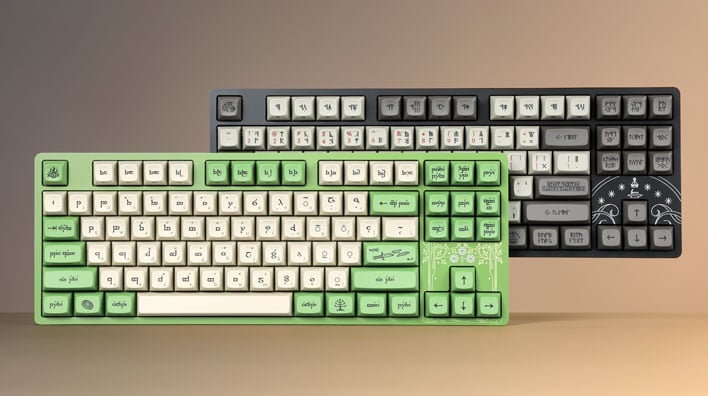 The Drop+ Lord of the Rings (LOTR) mechanical tenkeyless (TKL) keyboard’s rather unique selling point is that it is the first and only keyboard that is officially licensed by the owners of the legendary fantasy franchise, Middle-earth Enterprises. In basic product terms, it is a well-built, specially-crafted keyboard. However, the visual appeal and keycap set will intrigue LOTR fans, with a pair of enchanting designs; one with Dwarvish and another with Elvish script, accent keys, and artisan keycaps.

Drop+ says that these keyboards are a cohesive pre-built follow-up to its MT3 The Lord of the Rings keycap sets. If you didn’t already know from looking at the pictures, the Dwarvish design is based on the Doors of Durin, while the Elvish keyboard’s design features a stylized version of the Two Trees of Valinor (see top image). We received an Elvish sample for the review, and you can see its cream and green façade below. As well as having the keys pre-installed, there were some alternative keycaps in the box, in a ‘tan’ color; cursor keys, and replacement Esc, Space bar, and Enter keys. 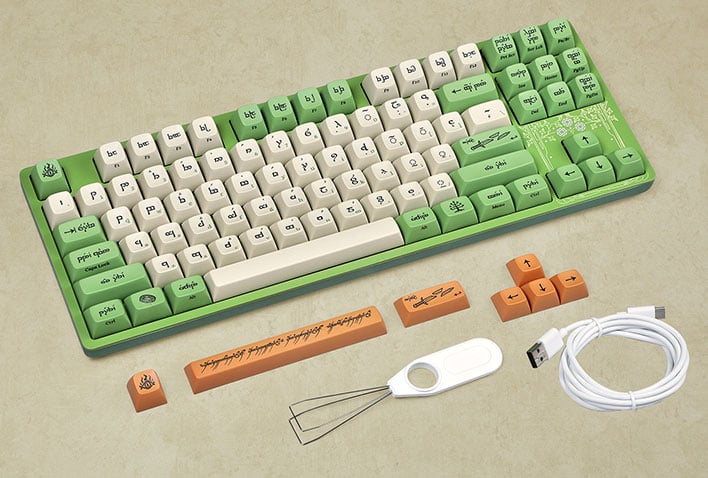 Compact keyboards are increasingly popular with people who don’t need a dedicated number pad (numpad) for day-to-day numerical data input, preferring the extra space on their desk offered by a TKL or smaller input device. A TKL keyboard, like this example, sports 87 keys in the US layout.
When you buy a Drop+ LOTR mechanical TKL keyboard, you are in effect buying the Drop+ ENTR keyboard which has been pre-assembled with MT3 The Lord of the Rings keycaps. As the standard Drop+ ENTR only costs $93 currently, you might wonder how the firm gets to a $169 pre-order price tag for the new pre-built Dwarvish and Elvish designs.

Obviously, the first upgrade vs the standard Drop+ ENTR is the addition of one of the Dwarvish or Elvish keycap sets, which sell for $130 on their own. Here they have ‘training versions’ with English letters and numbers still present, but in much smaller subscript. There are some further premium touches to this LOTR product design. Built with premium materials for an enthusiast-level look and feel, the Lord of the Rings keyboards come fully assembled with the MT3 the Lord of the Rings keycaps, lubricated Holy Panda X Switches, and Drop Phantom Stabilizers. Last but not least there are additional design flourishes on the keyboard deck and the anodized aluminum case the keyboard sits in has a Drop+ and LOTR logo. 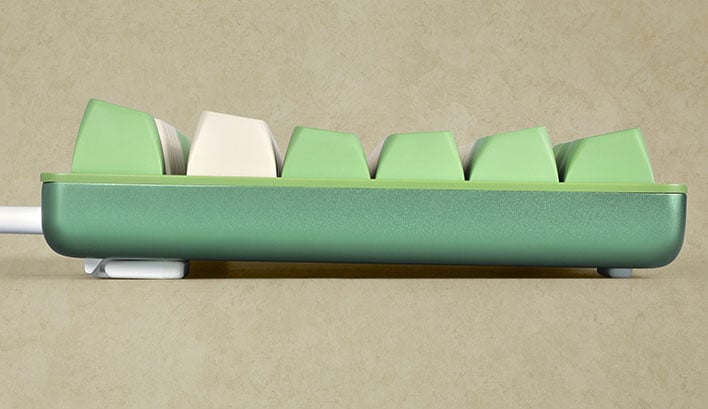 Moving away from the design to cold hard specifications, we have bulleted the most important specs below:
There is no software for configuring the keyboard. Users have a handful of Fn + F-Key shortcut media keys and app launching presets for convenience. Other welcome keyboard-based configurations are a Win-key lock and being able to adjust backlight brightness with Fn + cursor keys. 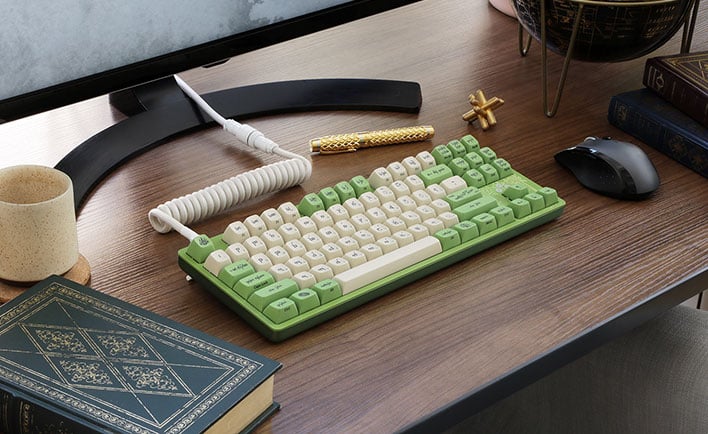 Testing The Drop+ Lord of the Rings Mechanical TKL Keyboard

Using the Drop+ Lord of the Rings mechanical TKL keyboard was a very pleasant experience. I have three other TKL keyboards, as they are a sweet spot for my tastes, and the feel of this LOTR tribute device was immediately weighty and premium. I liked the non-software approach, which reminded me of my Cooler Master keyboard configuration. Once you get used to it, you will feel very at-home with this design and the built-in shortcuts for backlight adjustments and media controls. Two extra things I would have appreciated are a function key lock, and some visual indicator of the caps lock status.
Drop+ puts a lot of emphasis on the appeal of the Holy Panda X key switches that it has upgraded the ENTR design with, as part of the LOTR branded keyboards. It says that it was inspired by users who swapped components of two different key switches to create “an ultra-satisfying tactile feel with a truly unique sound.” However, the resulting ‘Frankenswitch’ had issues due to the inconsistencies from DIY interventions like this. Thus, Drop+ got together with Gateron to make Holy Panda X key switches free of any disassembly-induced flaws, delivering reduced stem wobble and purported great consistency. 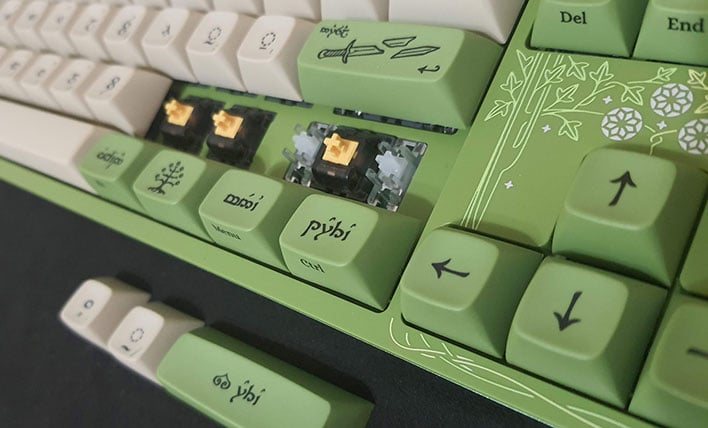 The interesting proposition here is that Holy Panda X is a relatively rare switch design which delivers “smoother, rounder, and more refined tactility.” When typing on the keyboard, I found it was indeed smoothly tactile, offering excellent positive feedback and a satisfying feel. The sound and feel reminded me of the old Alps keyswitches I enjoyed in various legacy keyboards in the 1990s, which were/are quite different to modern tactile Cherry types. However, there was definitely still some degree of stem wobble present, though not enough to detract, distract or irritate. Holy Panda X switches have a spring weight of 60g, are pre-lubricated, and compatible with MX cross mount keycaps.

Drop+ Lord of the Rings TKL Mechanical Keyboard: Our Conclusion

This Drop+ special edition keyboard offers a unique design which may be of great appeal to LOTR fans. If the TKL form factor is appealing to you, add that to the checklist. Other positives are the build quality and the smooth tactility of the pre-lubed Holy Panda X switches – as a well-rounded alternative to the sharp tactility offered by the much more common ‘blue’ or ‘brown’ tactile switches. Lastly, the keyboard is a straightforward, wired plug-and-type device.
There are some drawbacks to the board, however. This keyboard doesn’t offer many frills beyond the artistic LOTR design; no RGB, no status lights, no macros, no knobs or dials, and no software. Moreover, the Dwarvish or Elvish script being much more legible than the subscript-sized English letters may give some users pause. I am quite a competent typist, and on occasions I looked down at the keys and the Elvish script on my sample threw me off for a bit. This was a new keyboard to me, that I only had on hand for a week, however, so it is probably something that I'd get used to over time. 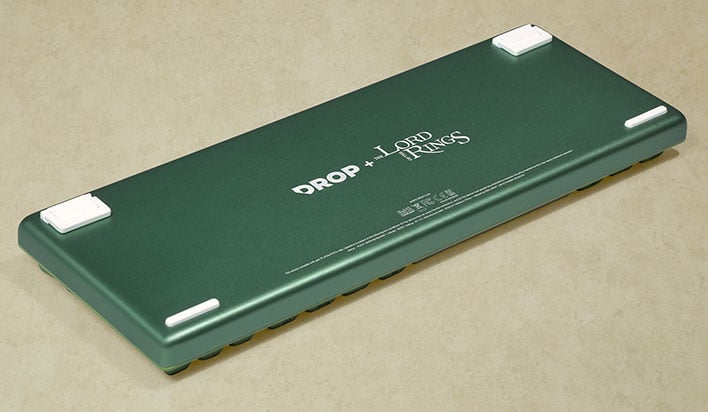 The Drop + The Lord of the Rings Dwarvish and Elvish keyboards are available for pre-order for $169 each starting August 16, 2022, and pre-order shipments will arrive by early October. Drop+ intends to raise the prices of these keyboards to $199 post-launch (August 26), so get in early if you're sold on the design.