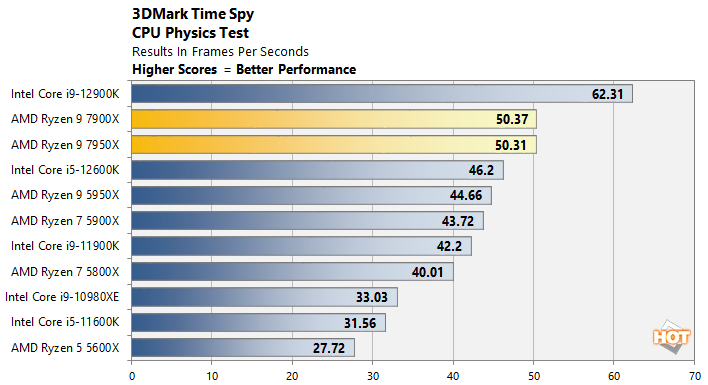 3DMark's Physics test, quizzically, has the Ryzen 9 7950X and Ryzen 9 7900X finishing right on top of each other, but like the computational fluid dynamic tests on the previous page, Intel's Alder Lake-based Core i9-12900K maintains a huge lead. 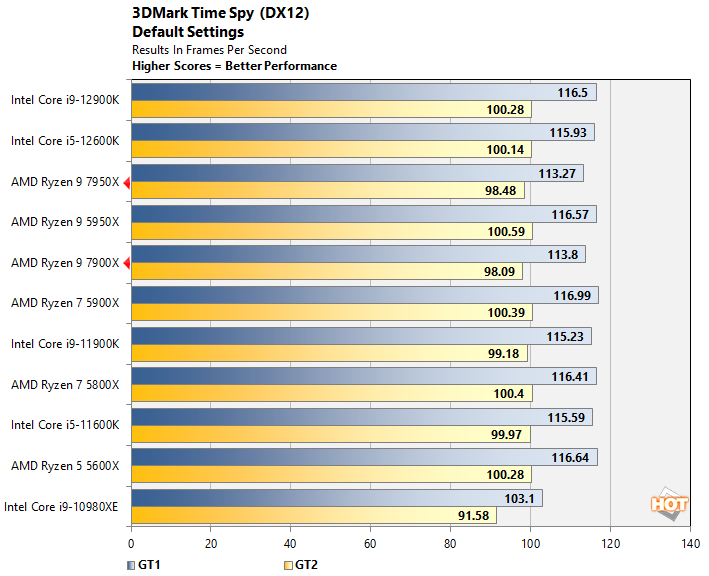 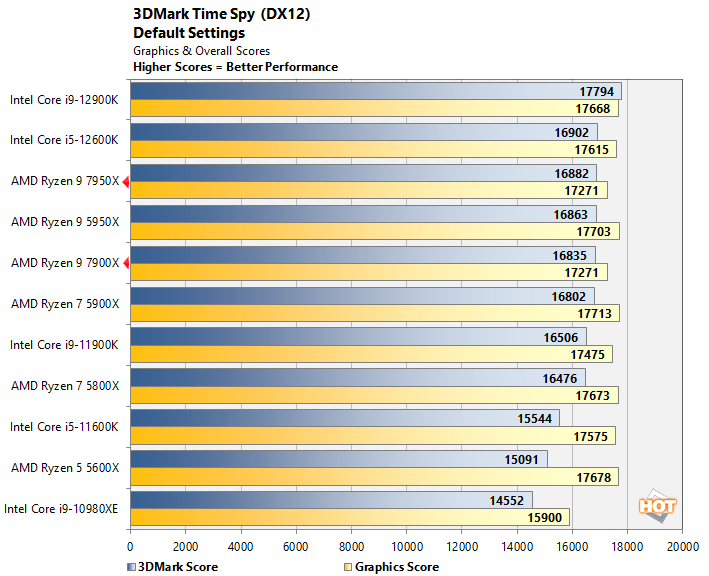 In the overall 3DMark Time Spy scores, the new Ryzen 7000 series processors processors are tightly grouped near the top of the charts, but they trail the 12th Gen Alder Lake chips by a small margin due to their lower physics scores and slightly lower framerates. 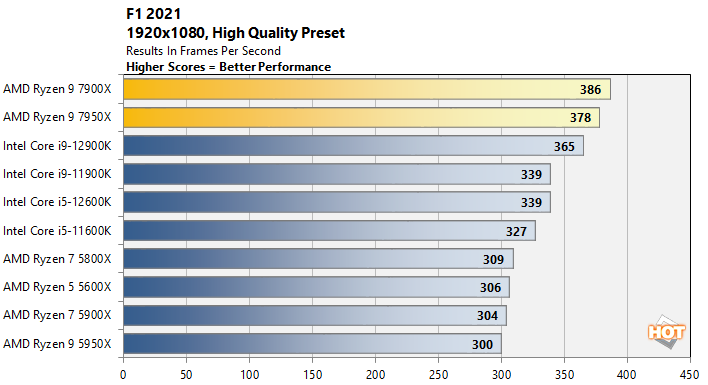 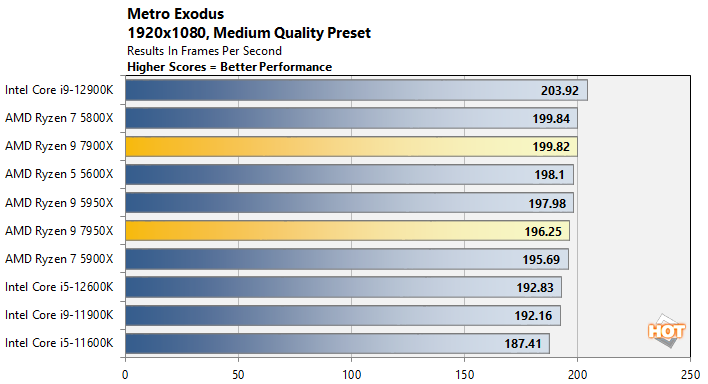 The new Ryzen 9 7950X and Ryzen 9 7900X performed well in the lower resolution game tests, taking the overall lead in one game (F1 2021), but still finishing amongst the fastest processors in the rest. While we can't say they're definitively the "fastest processors for gaming" based on these results, it's clear they're excellent gaming processors and the story will likely improve as faster, lower-latency DDR5 memory becomes more prevalent. 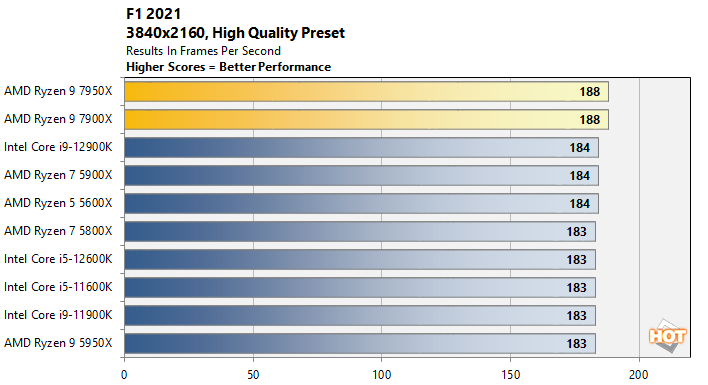 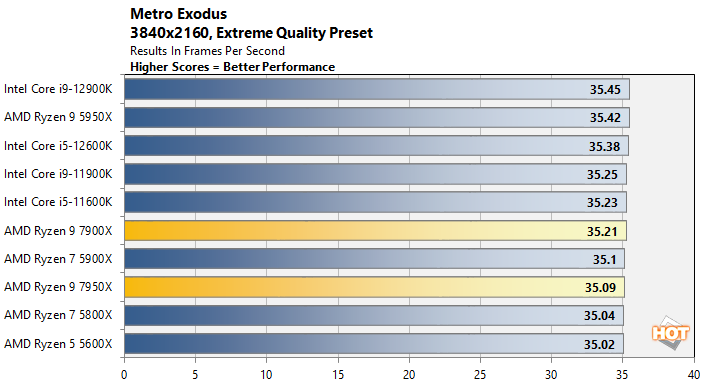 With the resolution cranked up to 4K, and high / extreme image quality settings used in the games, frame rates level off considerably and all of the platforms we tested are effectively tied. The Ryzen 7000 series does manage a first place victory in F1 2021, however, due to the game not being completely GPU bound at 4K.

We also ran a couple of tests on on the Ryzen 9 7950X using its integrated Radeon graphics, and compared it to a handful of numbers we had available using other Intel solutions and an array of previous-gen Radeon IGPs, from both desktop and mobile platforms. 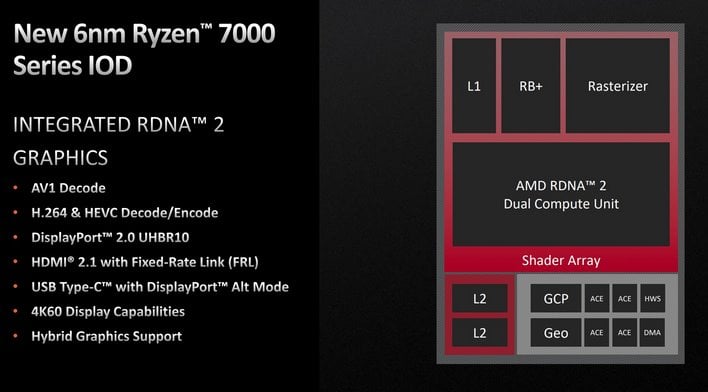 If you recall, the Ryzen 7000 series' updated IO die features a basic RDNA 2-based iGPU. AMD has positions the iGPU in the Ryzen 7000 series as a value-adder that will allow users to configure a system or to diagnose potential problems when a discrete GPU isn't available, but ultimately it's not missing many features. It's simply a cut-down RDNA 2-based GPU with two compute units and a similar media engine to mainstream Ryzen 6000 series GPUs. 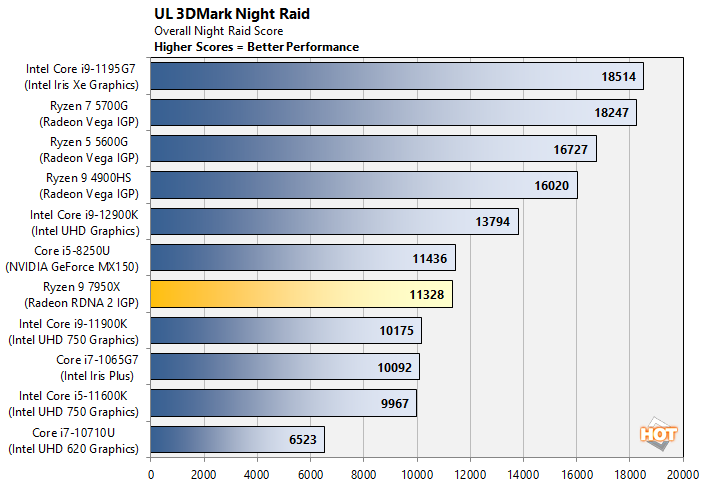 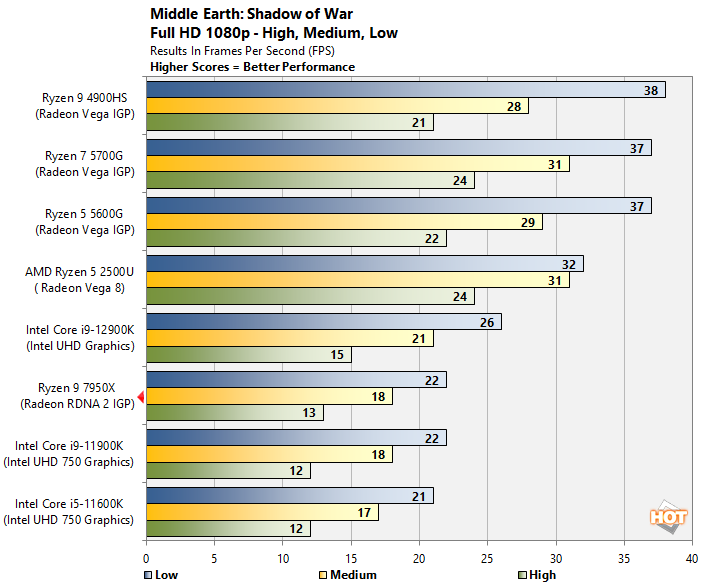 Throughout all of our benchmarking and testing, we also monitored how much power our Ryzen 7000 series-powered rig was consuming with a power meter, versus the other systems we used for comparison. 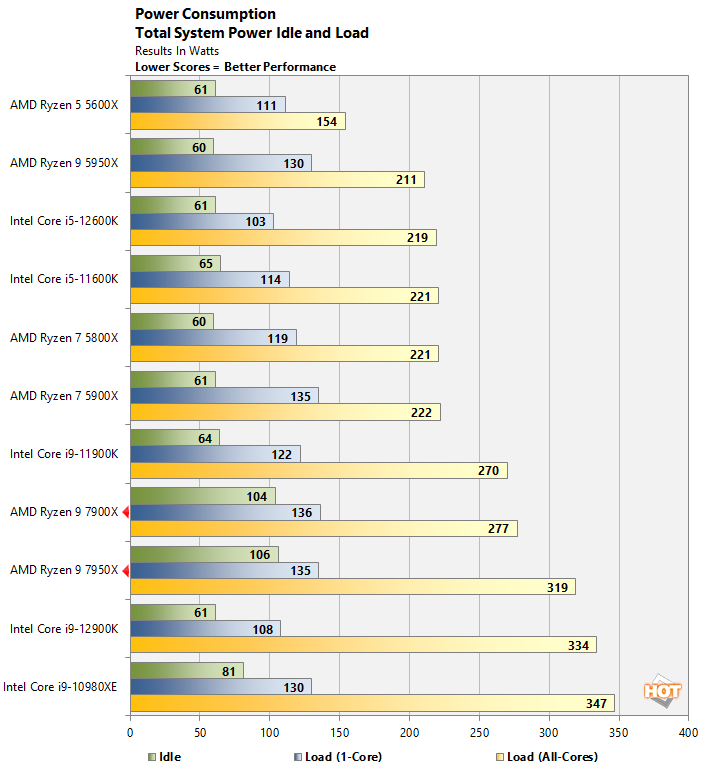 Although AMD has touted the Ryzen 7000 series' reduced idle power and increased efficiency, peak power consumption in all situations we tested was higher than the Ryzen 5000 series. Idle power is especially high. This is due to a number or things. First, the X670 Extreme chipset is comprised of two chips, not one, like the previous-gen X570, to enable PCie 5 support across more slots on the motherboard. AMD has also designed the Ryzen 7000 series to boost to maximum frequencies until it hits a thermal ceiling at 95°C. As such, the chips essentially use as much power as is available to achieve maximum their maximum frequencies, while riding along in a motherboard that requires more power than the previous generation. Peak power will likely look different in the non-extreme X670 and B-series chipsets.


How power, frequencies, and thermals play out in a variety of workloads is laid out in the chart above. As you can see, the Ryzen 9 7950X (when using a mainstream Corsair AIO cooler) maintains >5.4GHz boost clocks the vast majority of time, with temperatures hovering around 70°C in all of the productivity and gaming workloads. At the far right of the plots, during the multi-threaded POV-Ray render, you can see the "worst case" scenario, where the chip is fully taxed and its temperature peaks at 95°C.

Over the course of testing the Ryzen 7000 series, AMD reached out with additional information regarding power and thermals with the new chips. AMD has designed them to take advantage of all of the thermal and power headroom that is available within a given configuration. With the increase power headroom in the AM5 socket and higher TDP, most Ryzen 7000 processors will hit their thermal limit before hitting the power limit. As such, AMD expects most high-core count Ryzen 7000 series processors to hit the 95°C TJMax temp when running heavily multithreaded workloads, when using mainstream cooling solutions.

AMD notes that TJMax is the max safe operating temperature – not the absolute max temperature. Ryzen 7000 Series processors are designed to run at TJMax 24/7 without risk of damage or deterioration according to AMD. To use AMD's own words, "At 95 degrees it is not running hot, rather It will intentionally go to this temperature as much as possible under load because the power management system knows that this is the ideal way to squeeze the most performance out of the chip without damaging it."