Ryzen 7000 series processors will be paired to new 600-series chipsets and socket AM5. Socket AM5 uses a new 1,718 pin LGA (Land Grid Array) design, but will still be compatible with existing AM4 heatsinks and cooling hardware. AMD reiterated its plan to support AM5 with multiple architectures through 2025 and that the 600-series chipsets would target multiple market segments. 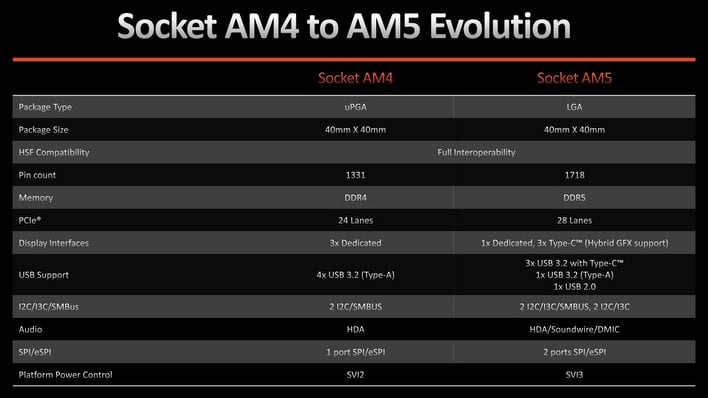 The X670 Extreme will be the flagship chipset, which will support PCIe 5.0 for both graphics and storage, while the X670 chipset will only support PCIe 5 for storage. A similar strategy was also mentioned for the upcoming B650 Extreme and B650. All told, Ryzen 7000 series processors will feature 24 PCIe Gen 5 lanes, up to 14 SuperSpeed (up to 20Gbps) USB ports, Wi-Fi 6E and Bluetooth LE 5.2 support, and HDMI 2.1 and DisplayPort 2 support.

To achieve broad support for PCIe 5 across storage and graphics, X670E-based motherboards will actually use two chipsets. As such, there’s plenty of IO and connectivity available. However, power requirements also double.

For this launch, 15 EXPO-enabled DDR5 memory kits are expected to be available at data rates up to 6,400MT/s. PCIe Gen 5 SSDs are also inbound for the platform from numerous partners, but those aren’t expected to arrive until the November timeframe.

We used the X670 Extreme-based Asus ROG Crosshair X670E Hero to take the Ryzen 9 7950X and Ryzen 7 7900X for a spin in this review. Like the other motherboards in the Asus’ ROG Crosshair line-up, this board targets hardcore-enthusiasts, and has a ton of features, over and above what’s offered by the AMD X670E chipset itself. 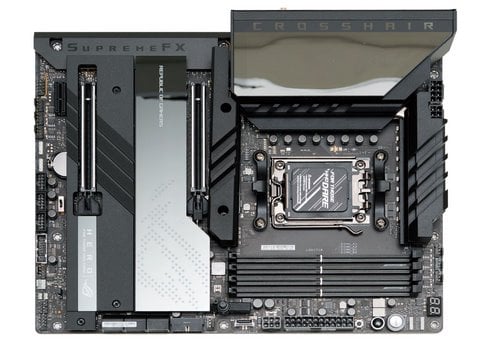 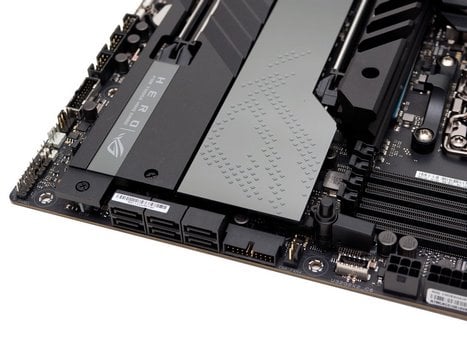 The Asus ROG Crosshair X670E Hero also has built-in support for AURA SYNC LED lighting, which can be extended with additional lighting strips. The board also has metal reinforcements on its expansion slots, and heavy-duty metal heat spreaders and heatsinks on the chipset and VRM. Additional shielding covers the back panel I/O and the front-end of the PCB. Extending out from the edge of the PCB, just above the top PEG slot, there is an M.2 heatsink that matches the aesthetic of the other cooling hardware on the board. And there’s additional slots down the below, as well – 5 in total. 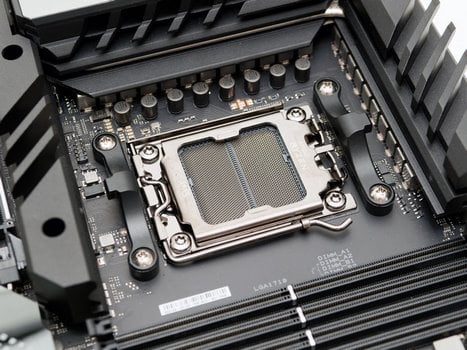 Like virtually all of the motherboards Asus offers, the ROG Crosshair X670E Hero has a modern, mouse-friendly BIOS / UEFI that’s easy to navigate and offers an extensive array of overclocking and performance-related options. The BIOS on this board sports everything from high resolution fonts to the latest version of ASUS’s hardware monitoring and fan control functionality.

The Asus ROG Crosshair X670E Hero also features high-end capacitors and chokes throughout its design to ensure reliable operation over the long-haul, as well as smooth, clean power delivery and clean audio. The board is outfitted with an all-digital, 16-stage PWM to optimize efficiency, with clean, smooth power delivery to the processor, RAM, and add-in cards. 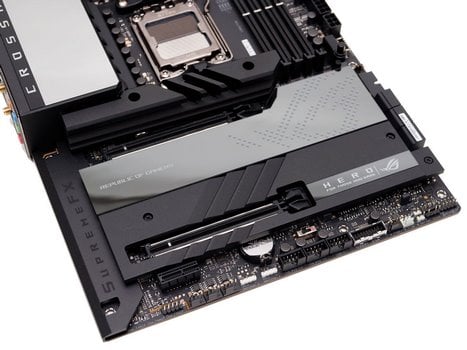 The Asus ROG Crosshair X670E Hero is compatible with AMD’s Ryzen Master performance tuning utility, but its UEFI is outfitted with all of the overclocker-friendly tools ASUS is known for, and then some. This board’s BIOS is absolutely loaded with options. The fan controls on the board are quite robust and ASUS has put in additional effort to ease configuration, by offering an array of auto-tuning options and presets that can be saved to individual profiles. Tweaking multipliers, voltages, and timings for virtually everything is supported. 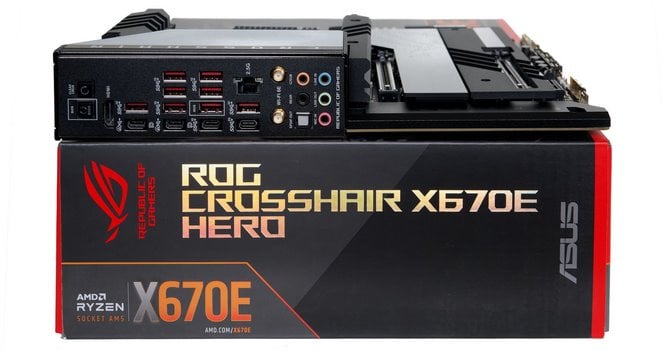 Other features of the Asus ROG Crosshair X670E Hero include USB 3.2 Gen 2x2 type-C and type-A ports (with up to 60 watts of power delivery and QC 4 compatibility), Intel 2.5 Gigabit Ethernet, 802.11ax Wi-Fi 6E with MU-MIMO, on-board power and reset switches, and a POST code error reporter. In addition to the aforementioned items, we should also mention that the Asus ROG Crosshair X670E Hero offers 8-channel audio with a Realtek ALC4082 codec and ESS SabreS9218PQ DAC/Amp. The design also incorporates audio shielding, discrete power delivery, and high-end Japanese capacitors for clean sound, which is particularly important for integrated audio solutions. 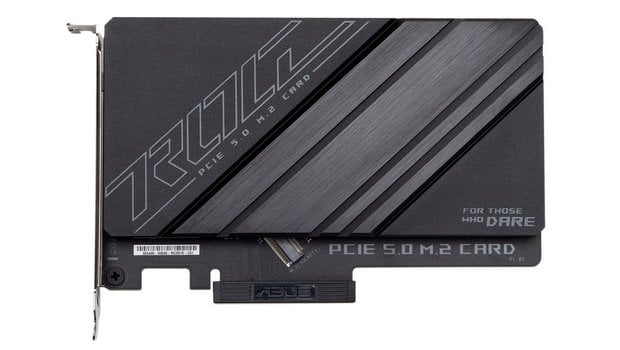 Over and above what’s actually built into the board or available through the chipset, Asus throws in a wide array of accessories and integrated peripherals including a boatload of decals, documentation, cables, etc.

Perhaps the most interesting included accessory is Asus ROG PCIe 5.0 M.2 card. This card gives users the ability to install a PCIe Gen 5 SSD and hang it directly off of the CPU (or any other PCIe x4 slot). The card has a massive, removable heatsink to help cool the drive as well, to ensure peak performance, without throttling.

All-in, we found the layout of the Asus ROG Crosshair X670E Hero to be very good and also really like the overall aesthetic. 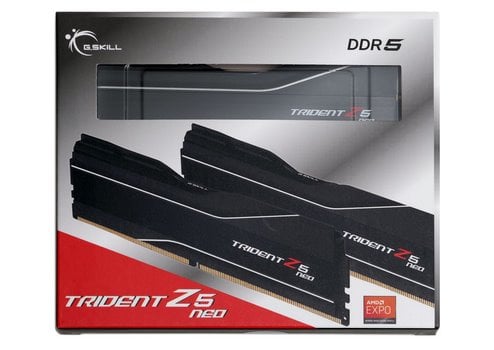 This kit consists of two, matching 16GB sticks of memory, for a grand total of 32GB when configured in a dual-channel setup. It’s important to note that for optimal performance, the Ryzen 7000 series should be run with only two sticks of memory. When fully populating all four memory slots on the motherboard, the officially-supported maximum memory frequency will drop from 5,200MTs to only 3,600MT/s. That said, if you’re willing to overclock a bit, the “sweet spot” for memory performance on Ryzen 7000 series processors is DDR5-6000. At that speed, the memory controller and DRAM speed are tied at 1:1 ratio. Above DDR5-6000, that ratio changes to 2:1, which will introduce additional latency. 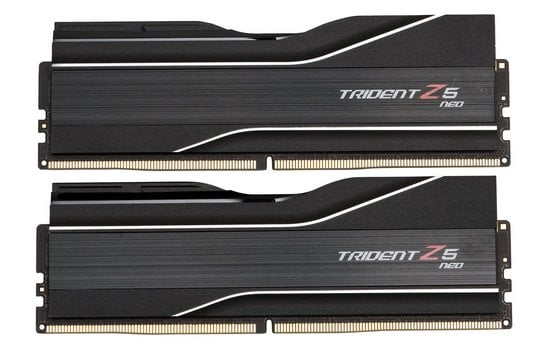 This G.SKILL memory is capable of running at 6,000MHz with relatively tight 30-38-38-96 timings at 1.35v. In comparison to DDR4, those timings may seem downright slow, but we are still in the early days of DDR5 adoption, and as of today, this is a pretty speedy kit. 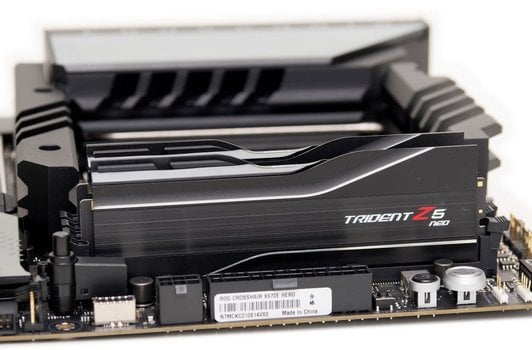 In addition, the sticks feature stylized heat spreaders, and they support AMD’s EXPO technology. Tweak a single option in the system BIOS, and this kit will run at its optimal frequency and timings – no fuss, no muss. Throughout our testing this memory was rock-solid and stable, whether operating at DDR5-5200 or at its maximum rated speed and timings.