Before running any of our benchmarks, we apply all of the latest Windows and driver updates to the system we are testing. Our particular ASUS ROG Zephyrus G14 sample shipped with Windows 11 Pro 21H2 and needed very little updating. Other than applying any available updates (like most consumers would), we run all of our tests with out-of-the-box settings. Our goal is to test the system as it ships, but after auto-updating, to accurately reflect what buyers can expect from a retail experience.

The ASUS ROG Zephyrus G14 has an additional wrinkle in that it gives users the ability to switch between multiple power modes through the Armory Crate app, and it will auto-switch to different profiles when running on AC or battery power. We decided to keep things simple and ran out entire suite of tests in both Performance mode (which was the out the box default) and Turbo mode, which cranks up the fan speeds and power targets for the CPU and GPU. 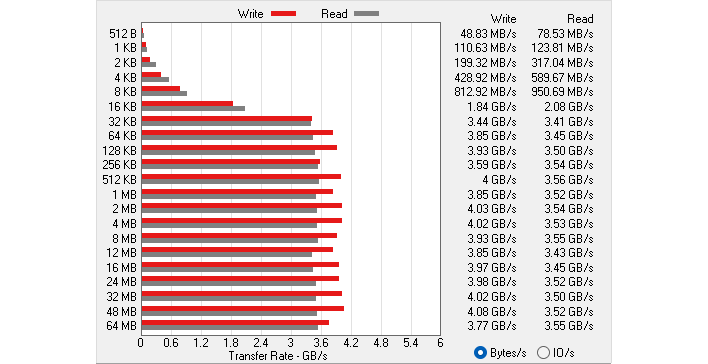 Although the Ryzen 6000 series features integrated PCIe Gen 4, the Micron NVMe SSD included in the ASUS ROG Zephyrus G14 doesn't fully exploit it. As you can see, reads and writes peak in the 3.55GB/s - 4GB/s range, which is nothing to sneeze at, but doesn't come close to today's top-end PCIe Gen 4 drives that approach the 7GB/s mark. 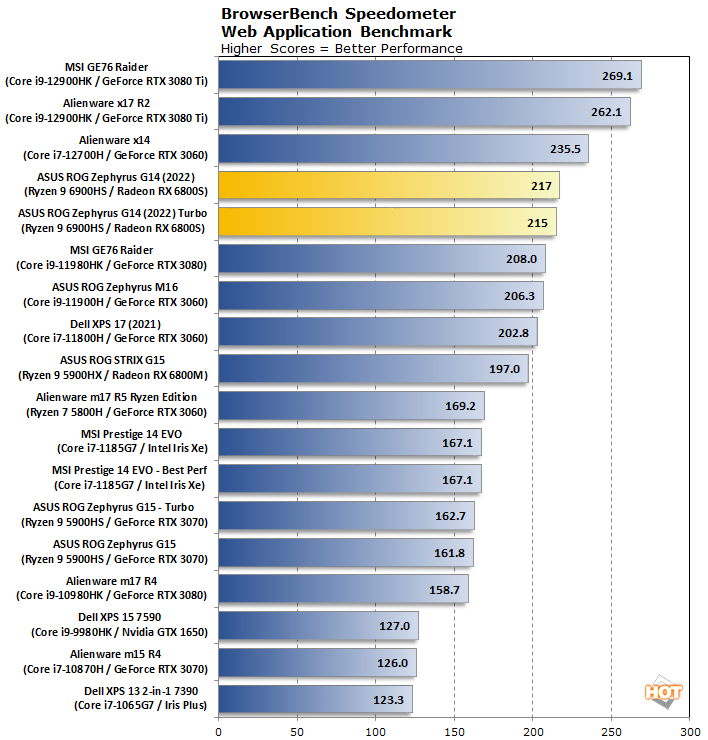 The Ryzen 9 6800HS is a significant step up from the previous-gen Ryzen 5000 series chip (as seen in the ROG Zephyrus G15), which pushes the ASUS ROG Zephyrus G14's score into the upper echelon of systems, but Intel's 12th Gen processors based on Alder Lake score a clear win in here.

This is the latest 3D rendering benchmark from Maxon, based on the Cinema 4D R23 rendering engine. We tested both single-threaded and multi-threaded tests on all of the notebooks represented here... 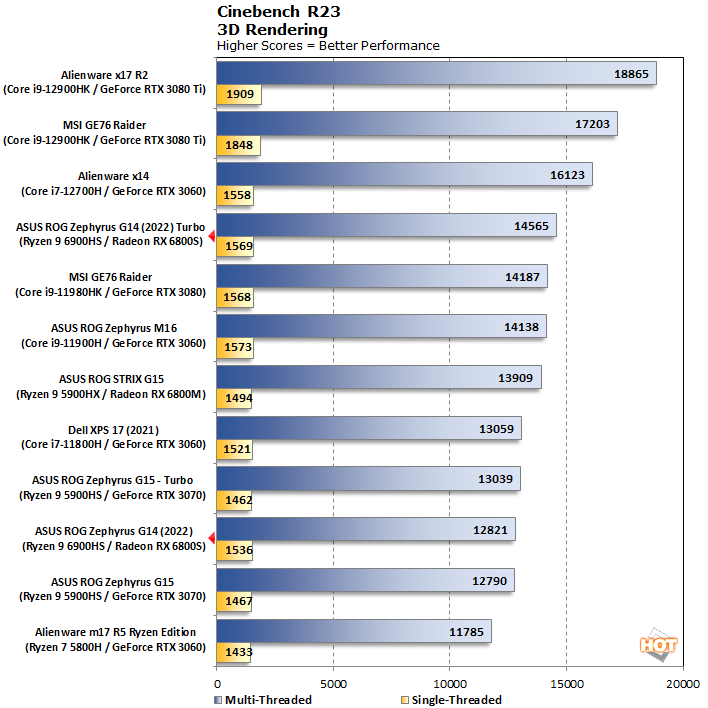 Kicking the ASUS ROG Zephyrus G14 into Turbo mode offered a big boost in performance. In the default Performance mode, the Ryzen 9 6900HS was marginally faster than it's previous-gen counterpart in the multi-threaded test, but the comparison favors the 6900HS by a much larger percentage in the single-thread test. Enable Turbo mode, however, and the ASUS ROG Zephyrus G14 with its 8-core / 16-threads jumps up the charts and lands just behind the 14-core / 20-thread Core i7-12700H. 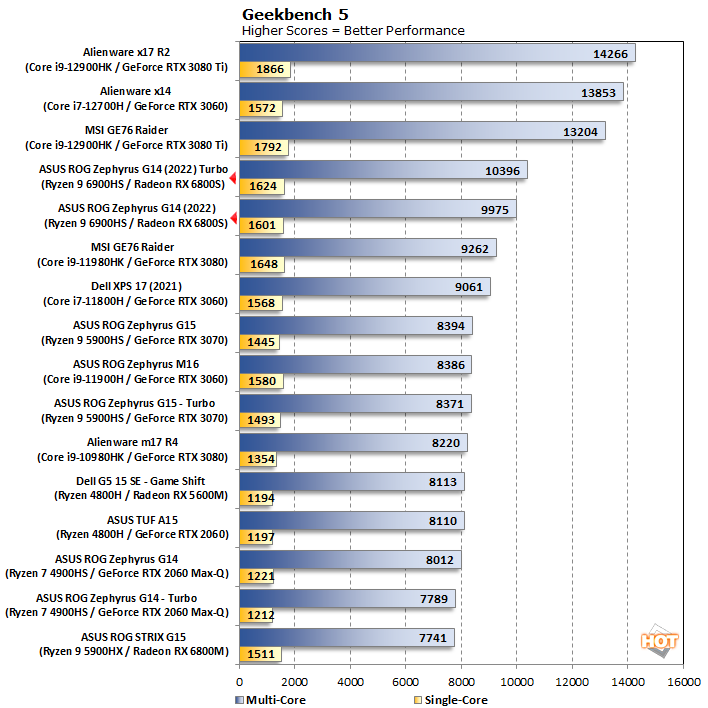 Geekbench has the Ryzen 9 6900HS-based ASUS ROG Zephyrus G14 besting all of the previous-gen systems, including the much higher-power Core i9-11980HK. The latest Intel 12th Gen processors, however, finish well out in front, especially in the multi-threaded test. 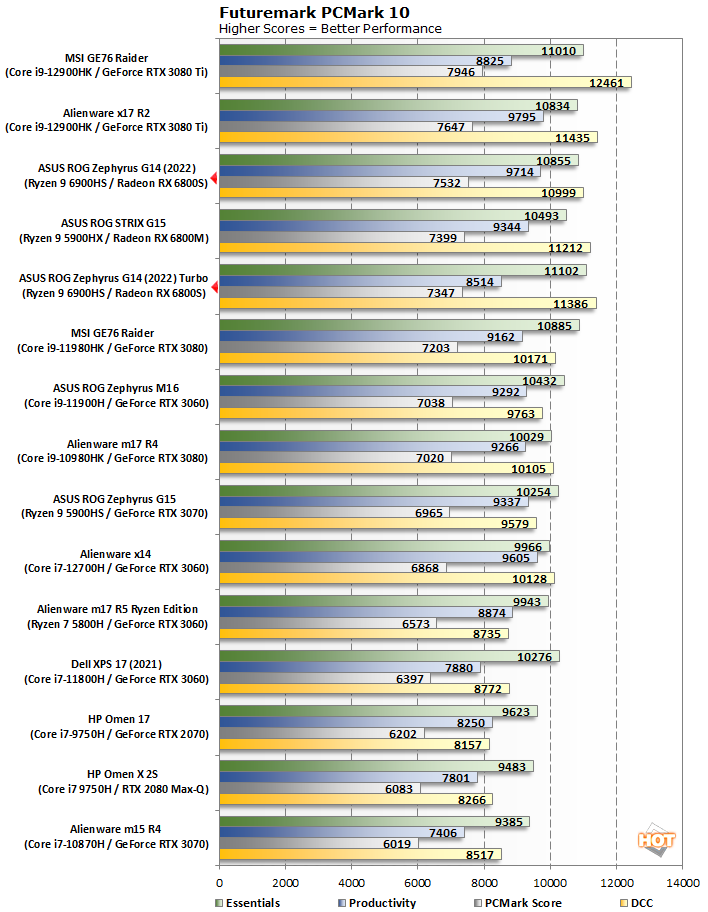 Enabling Turbo mode somehow hurt the ASUS ROG Zephyrus G14's productivity score, which dragged down the overall score -- its DCC and Essentials scores were better, though. Still, the machine is among the fastest we've tested, whether Turbo is enabled or not. We suspect things would have looked even better here with a top-end SSD on-board. 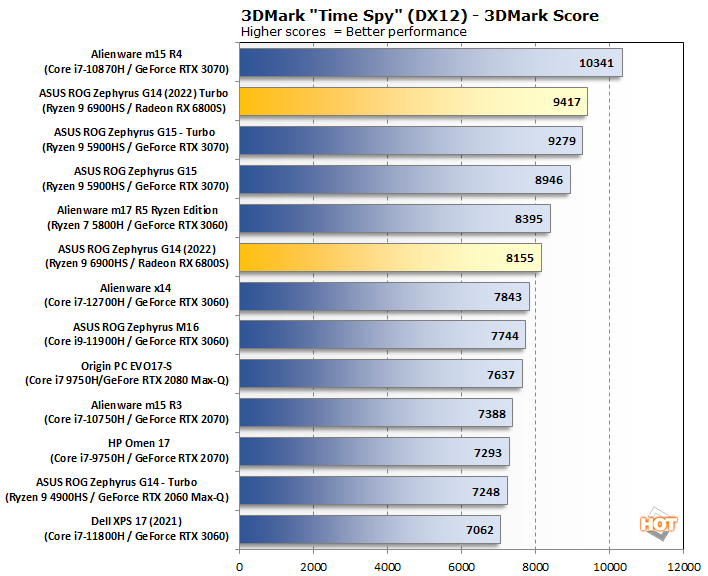 The Radeon RX 6800S in the ASUS ROG Zephyrus G14 performed well in Time Spy, trading blows with the GeForce RTX 3060 or RTX 3070-powered machines, depending on which power mode was used. As we've seen in a number of tests so far, enabling Turbo mode results in a significant jump in performance. 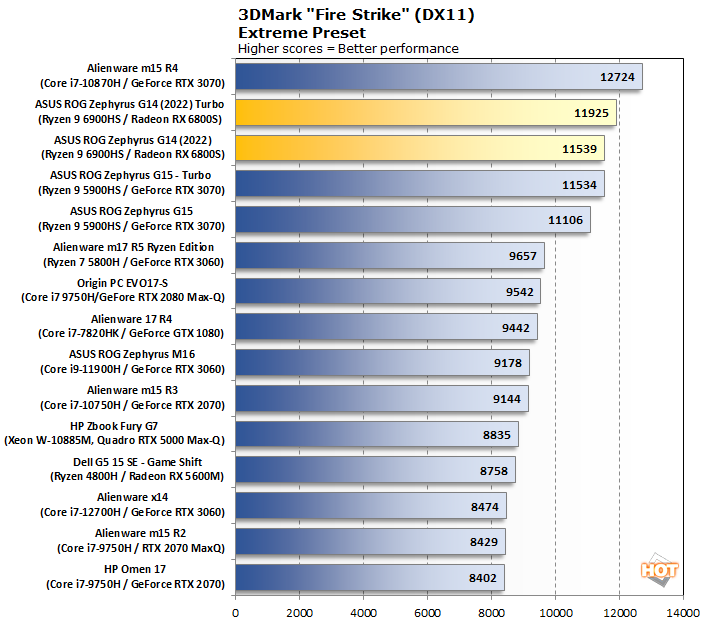 We saw more of the same in 3DMark Fire Strike. Enabling Turbo mode pushed the ASUS ROG Zephyrus G14 up the charts, but it couldn't quite catch the RTX 3070-powered Alienware m15 R4. 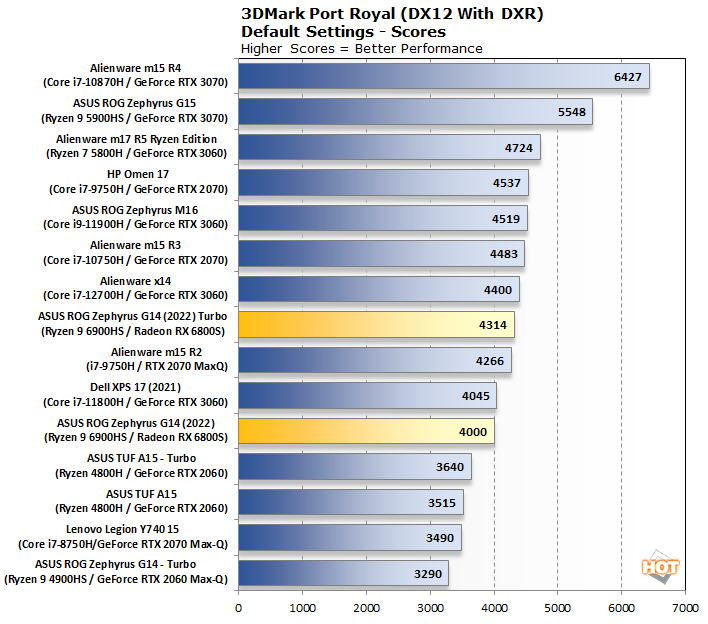 AMD is still in its first-generation of Ray Tracing-enabled GPUs and NVIDIA's GeForce RTX 30 series GPUs have a clear advantage. Still, the ASUS ROG Zephyrus G14 performs well, especially in Turbo mode, and lands somewhere in between the RTX 3060 and RTX 3070.

Gears 5 is a popular title on the Xbox and PC alike, and on top of looking great, it's a blast to play. We used the High image-quality preset at 1920x1080, same as the other games, to test Gears 5. 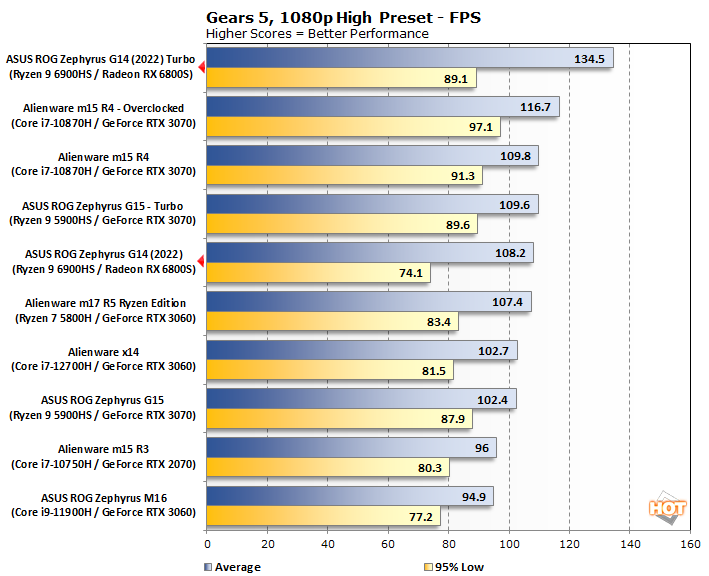 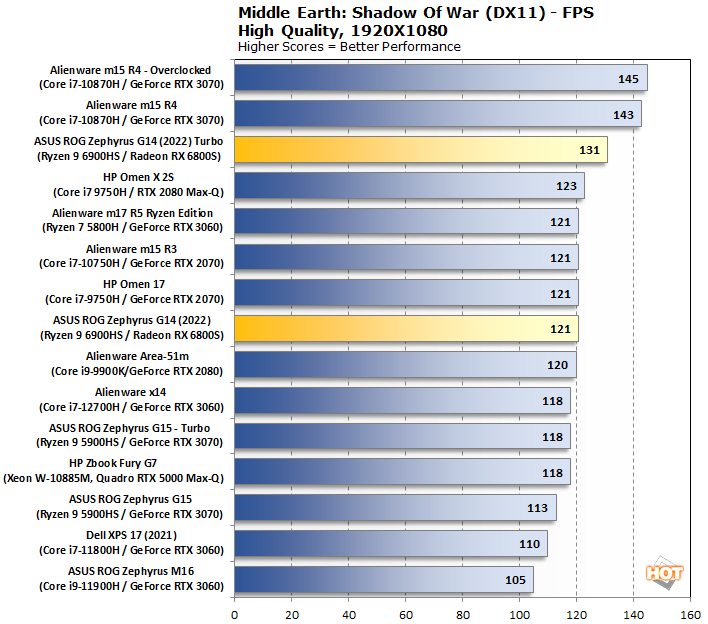 At this point we're probably starting to sound like a broken record, but the numbers are what they are. In this game, the Radeon RX 6800S-powered ASUS ROG Zephyrus G14 once again trades blows with the GeForce RTX 3060 and RTX 3070-powered laptops, like the Alienware x14, and enabling Turbo mode results in a significant increase in performance.

Shadow Of The Tomb Raider Benchmarks 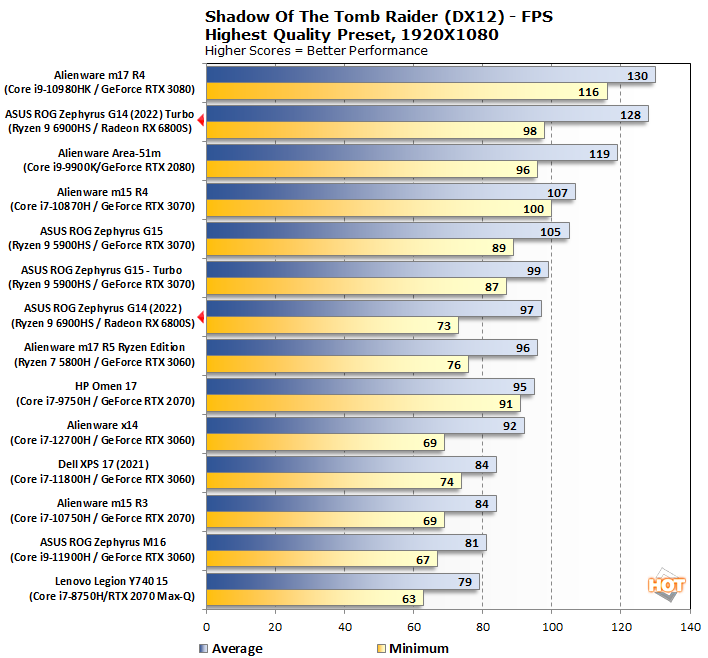 The Tomb Raider benchmark is affected by both CPU and GPU performance. Once again, we see Turbo mode offering a big step up in performance, and the ASUS ROG Zephyrus G14 with its Radeon RX 6800S lands in similar territory to the RTX 3070, nearly catching the RTX 3080 in the big burly Alienware machine.

F1 2021 is Codemaster’s latest Formula One racing simulation, and like previous version of the game, it sports impressive visuals. This latest addition to the franchise supports DirectX 11 or DirectX 12, and it incorporates support for a number of AMD's FidelityFX and NVIDIA technologies (like DLSS), though we didn't enable any of them to keep the playing field level. We tested the game with its Ultra High graphics preset, but with Ray Tracing and TAA enabled to see what the GPUs could do. 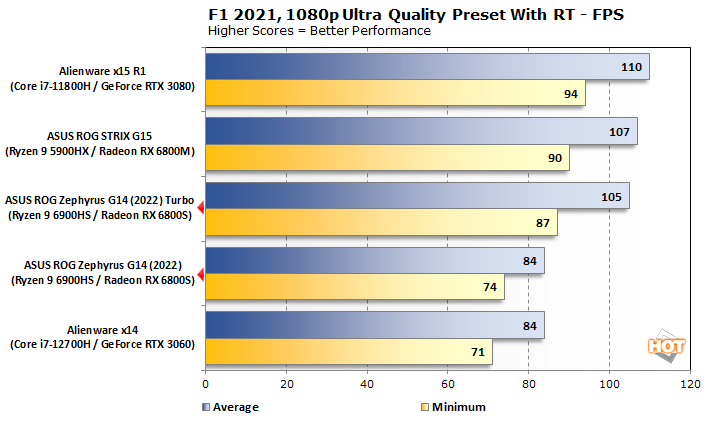 With Ray Tracing enabled in F1 2021, the ASUS ROG Zephyrus G14 with its Radeon RX 6800S is able to outrun the GeForce RTX 3060 in both power modes, and once again we see Turbo mode offering a big boost to performance.

Guardians Of The Galaxy Benchmarks

Marvel’s Guardians of the Galaxy is an action-adventure game, where you play as Star-Lord and lead the rest of the Guardians from mission to mission. The game’s minimum requirements call for a Radeon RX 570 or GeForce GTX 1060-class GPU and the game also supports some of the latest graphics technologies, including DXR and DLSS, though we didn't enable that in our testing, to keep the playing field level. 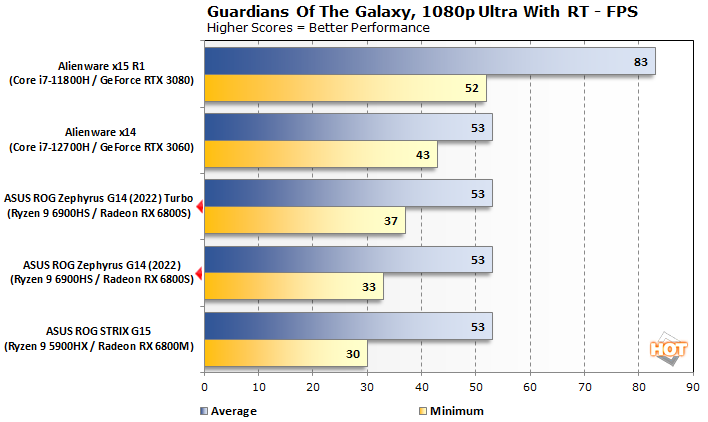 The tables turn in the Guardians Of The Galaxy benchmark, Here, the ASUS ROG Zephyrus G14 with its Radeon RX 6800S offers the same average framerate as the RTX 3060, but with lower minimums. Turbo mode also had little impact on performance, save for a bump in the minimum framerate.

Although virtually all taxing 3D workloads will be handled by this system's discrete Radeon RX 6800S GPU, the fact is the Ryzen 6000 series' integrated Radeon 6x0 series RDNA2-based GPU is being touted as a significant step up over other integrated solutions. To put that to the test, we ran a couple of tests on the Radeon 680X incorporated into the Ryzen 9 6900HS as well... 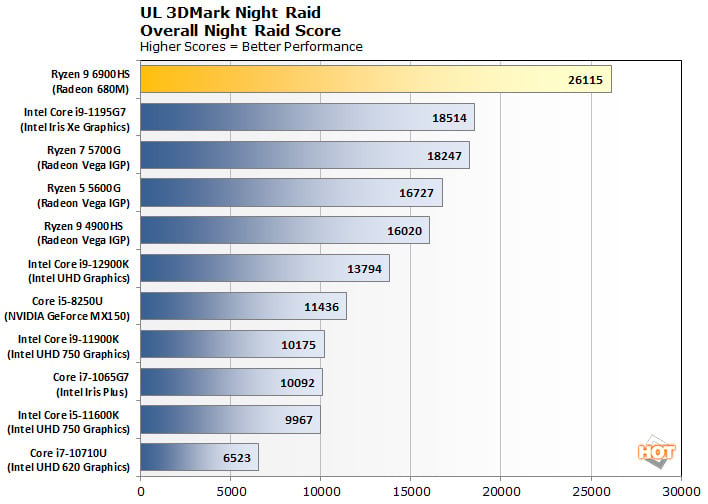 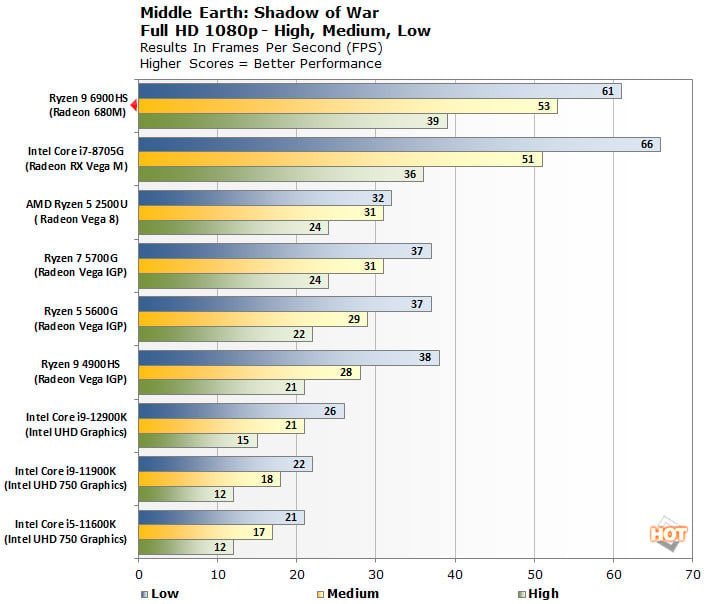 As you can see, the Radeon 680M absolutely crushes all of the other integrated solutions we have data for (which is just about everything on the market). In fact, the Radeon 680M actually outruns the discrete Vega-based GPU that was incorporated into Intel's Kaby Lake-G design.

We run a custom 1080p HD video loop test developed in-house, to prove out battery life with our test group of machines. In all tests, Windows Quiet Hours / Focus Assist has been enabled and the displays are calibrated with lux meters on pure white screens to as close to 115 lux as possible. For the average laptop this is somewhere between a 40-60 percent brightness setting. 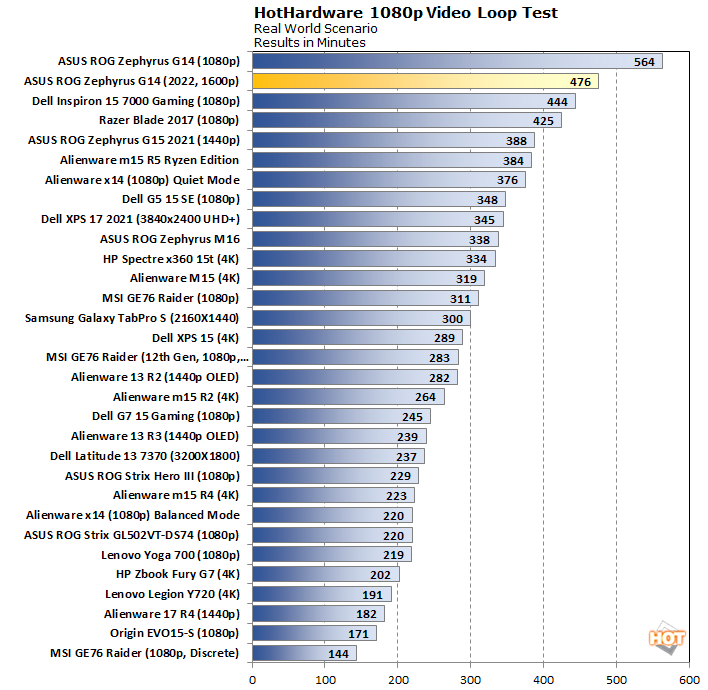 In our custom video loop test, the ASUS ROG Zephyrus G14 offers exceptional battery life. When operating on battery, the system automatically shifts into a Quiet mode, which ramps down clocks and we see the ASUS ROG Zephyrus G14 offering some of the best battery life we've seen from a notebook this powerful. It doesn't quite catch the previous gen machine, but this newer model for 2022 features a much higher resolution, high-refresh rate screen, which likely consumes considerably more power.

Let's see how it handles gaming battery life via PCMark's Gaming test, though... 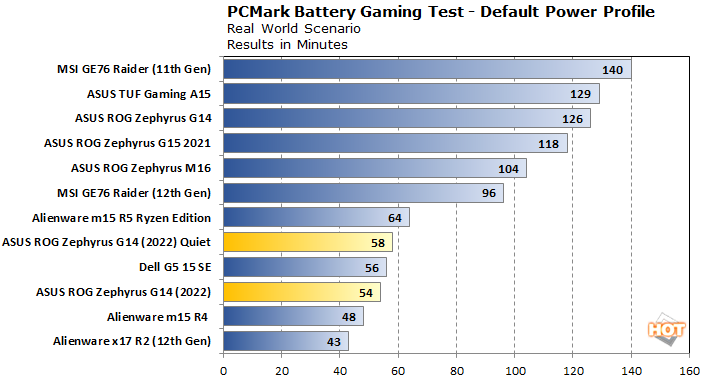 This is a far more strenuous battery life test that hammers on the entire system, to simulate an actual gaming workload. Here, the ASUS ROG Zephyrus G14 with its Ryzen 9 6900HS and Radeon RX 6800S trails most of the pack, offering a bit less than an hour of untethered mobile gaming. With such powerful hardware on-board what is a relatively small and thin system, ASUS could only shoehorn a 76Whr battery in the machine. 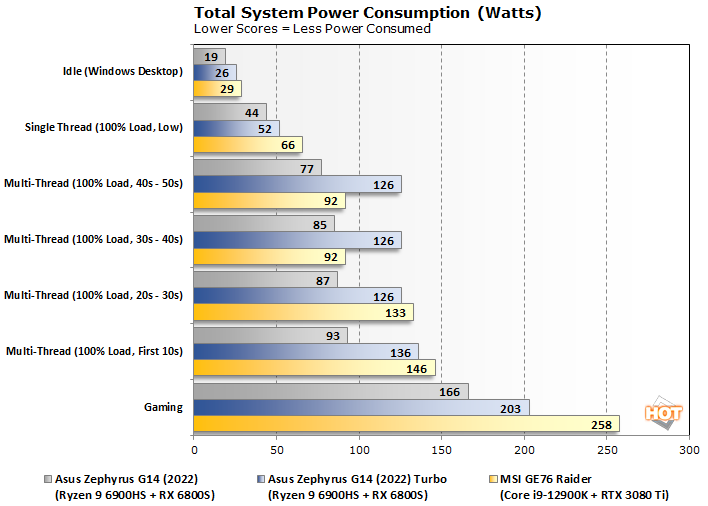 We also did some power testing to see how the ASUS ROG Zephyrus G14 behaved under various conditions. Please note as you look at these numbers that the new MSI GE76 Raider is a much larger machine, with a bigger display, and multiple drives, that's in a completely different category of devices. We're using it here for reference only to show how the 12th Gen Alder Lake based processor behaves in terms of power consumption versus the Ryzen 6000 series.

What you'll notice is that enabling Turbo mode results in significantly higher power consumption (as you would expect). The system behaves quite differently to the Adler Lake, however. When running Cinebench (as we did here), the Intel 12th Gen CPU will run flat-out for the first few seconds and pull a lot of power, initially peaking at around 146 watts. Then, as the chip heats up, clocks and voltages ramp down, and peak power drops commensurately. The Ryzen 9 6900HS ramps down very little, however, and maintains near peak performance throughout the entire run. In terms of total power in a gaming workload, there's a nearly 100W difference between the ASUS ROG Zephyrus G14 and GE76 Raider, but again, we want to point out that these are two different classes of machine. We're just providing the data because its interesting and we have it on hand.