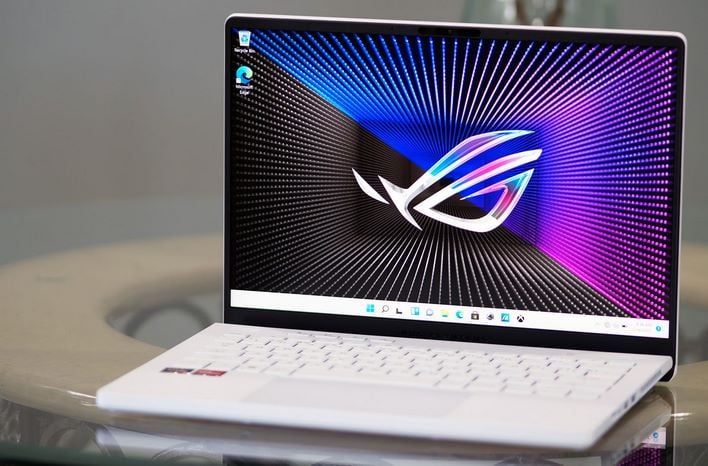 AMD had a wildly eventful keynote at CES 2022, jam-packed with announcements. During the festivities, CEO Dr. Lisa Su, Frank Azor, Jason Banta, and Laura Smith jointly revealed a wide array of products, including the Radeon RX 6500 XT, Ryzen 6000 series mobile processors, and refreshed Radeon RX 6000S series mobile GPUs, along with AMD Advantage program updates, and the Ryzen 7 5800X3D and next-gen Ryzen 7000 desktop processors. There was a mountain of information to unpack after the event, but as time passes things are coming into focus. We recently had the chance to check out the Radeon RX 6500 XT, for example, and today we get to tinker with a highly-anticipated A+A notebook, packing a Ryzen 6000 series mobile processor and Radeon RX 6800S GPU, the newly-updated ASUS ROG Zephyrus G14 for 2022.

We took a look at the first ASUS ROG Zephyrus G14 built around the Ryzen 4000 series and NVIDIA RTX graphics a couple of years back and came away impressed. Despite packing some serious CPU and GPU resources, the ASUS ROG Zephyrus G14 had a relatively svelte form factor and it offered excellent all-around performance with good battery life. This latest ASUS ROG Zephyrus G14 for 2022 borrows much of the design philosophy of the original, but leverages AMD’s latest mobile CPU and platform technologies, paired to an amazing display, packed in a 14” machine, that’s only 19.5mm wide and weighs less than 4lbs.

We felt it was worthwhile to take another look at the ASUS ROG Zephyrus G14's long-term performance, post numerous AMD software and firmware updates. How did it hold up? In a word, great but find out for yourself here. We've added the performance update to the final page of this article and we've added some recent video coverage, as you can see, as well.
Here's a look at the exact ASUS ROG Zephyrus G14 configuration we got to play with, along with a video tour, if you want get a better physical view of the system. As you'll see, it’s a potent, but attractive little beast... 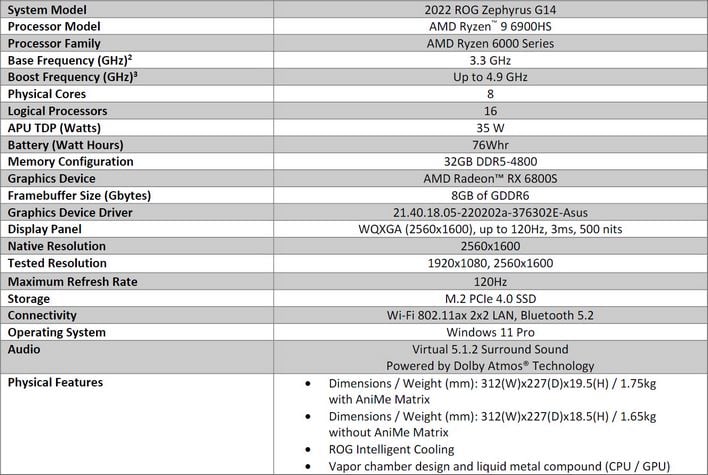 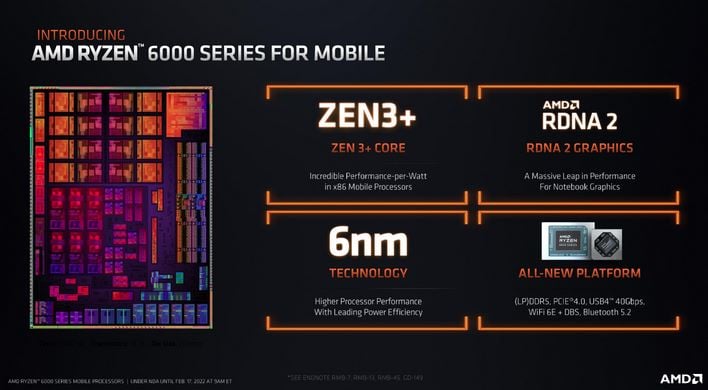 Before we dig into the ASUS ROG Zephyrus G14, we need to discuss what makes the new AMD Ryzen 6000 series mobile processors and platform tick. At a high-level, they feature a refinement of the existing Zen 3 architecture, dubbed Zen3+, that’s been heavily optimized for power efficiency. The integrated graphics processor has also been updated. Whereas Ryzen 4000 and 5000 series processors with integrated graphics leveraged older GPU architectures, the Ryzen 6000 series gets a no-compromise RDNA 2-based iGPU, with the same feature set as other Navi-based graphics cards – just scaled back for mobile applications. The platform has also been updated with support for DDR5 memory, PCIe Gen 4, and USB 4. 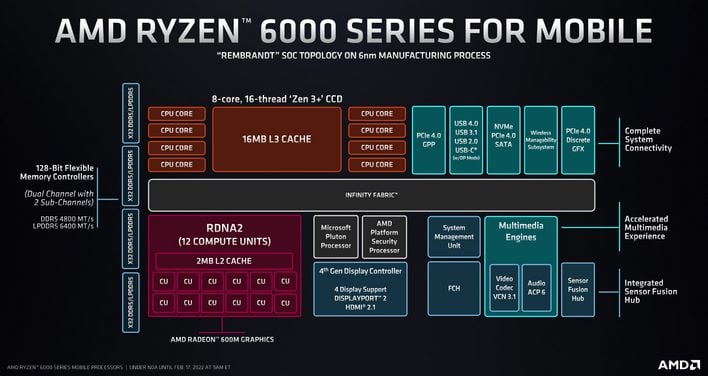 Ryzen 6000 Series processors are manufactured on a 6nm process node and feature 13.1 billion transistors, versus 10.7 billion in the previous-gen Ryzen 5000 series. With 30%+ more transistors, the Ryzen 6000 series also ends up having a larger die (210mm2 vs. 180mm2), but considering the improvements and enhancements made to virtually every part of the platform, the additional transistors and silicon seem well-utilized. 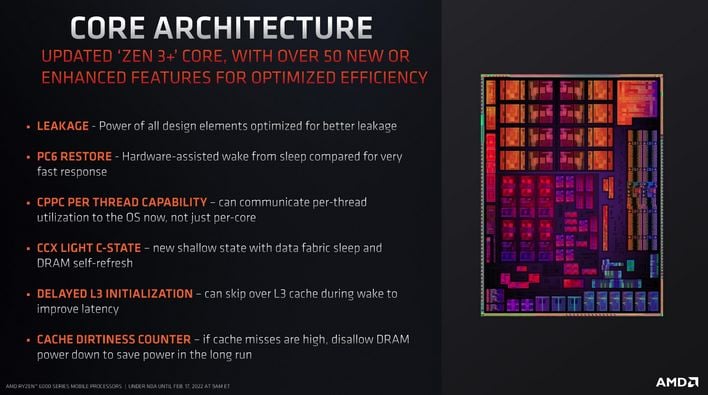 AMD has optimized Zen 3+ in a number of ways, with a laser focus on reducing power consumption and optimizing efficiency. We’re going to quote AMD directly on some of the highlights…

In addition to the optimizations made to the Zen+ architecture itself, the entire SOC also offers an array of improvements to further optimize power. 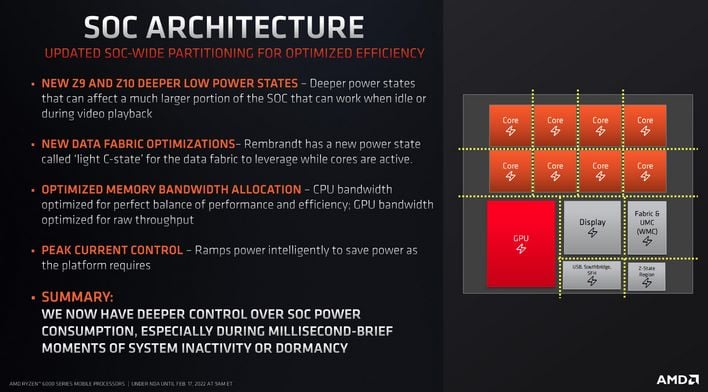 Ryzen 6000 series processors offer new Z9 and Z10 deep power states, optimizations to the data fabric, and optimized memory bandwidth allocation. As has also been the case with previous-gen processors, AMD Ryzen 6000 series processors dynamically react to whatever workload is being run at the time, by scaling voltages and frequencies as necessary. However, with these newest Ryzen 6000 processors, AMD is also claiming deeper, finer-grained monitoring and gating, during even the briefest moments of inactivity. 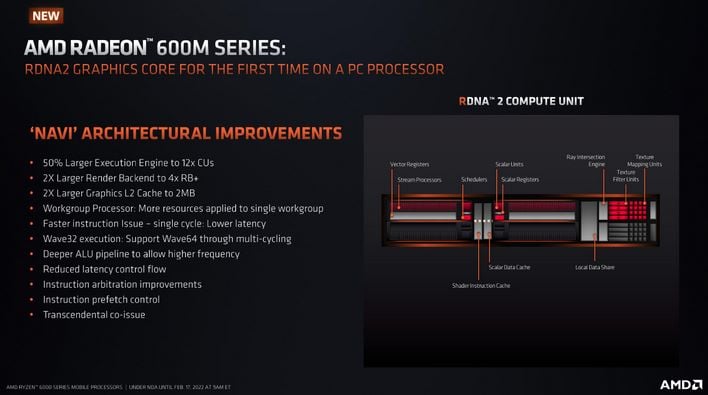 Over and above the CPU architecture, Ryzen 6000 series parts are also graced with the much more power efficient RDNA 2 GPU architecture. The new Navi-based iGPU in the Ryzen 6000 utilizes the exact same graphics architecture and GPU design philosophies as other Navi-based Radeons. As we’ve seen in many of our discrete GPU reviews, Navi is significantly more power efficient than its predecessors. And as implemented in the Ryzen 6000 series, Radeon 600M iGPUs offer a massive increase in performance. We’ll show you just how big in the benchmarks ahead.

The latest ASUS ROG Zephyrus G14 is an A+A AMD Advantage notebooks that leverages AMD technologies top to bottom. In addition to the Ryzen 6000 series processor, the system also features a Radeon RX 6800S discrete GPU. And that GPU is paired to a MUX switch to allow for direct-connection to the display for maximum performance.

Like the Radeon RX 6000M, the RX 6800S features 32 enhanced compute units, with 32MB Infinity Cache, but the GPU is paired to 8GB of faster GDDR6 memory and AMD is able to wring out somewhat higher clocks from the part. The Radeon RX 6800S as configured in the ASUS ROG Zephyrus G14 has a 80W base TDP, with a max boost clock of 1,975MHz. When utilizing SmartShift Max, however, which allow the CPU and GPU to “share” any available power and thermal headroom available in the system, the Radeon RX 6800S can shift up to a 105W envelope. In practice, this results in significant boost in performance.

All told, the Ryzen 6000 series is a higher performing, more feature-rich, and more power efficient platform than its predecessor, with more advance IO technologies integrated into the platform. Another interesting aspect to the Ryzen 6000 series is that 8-core processors will be available in every series, from the 15-28W U-Series on up the most powerful 45W+ HX-branded parts. 6-core processors are also features in the line-up. 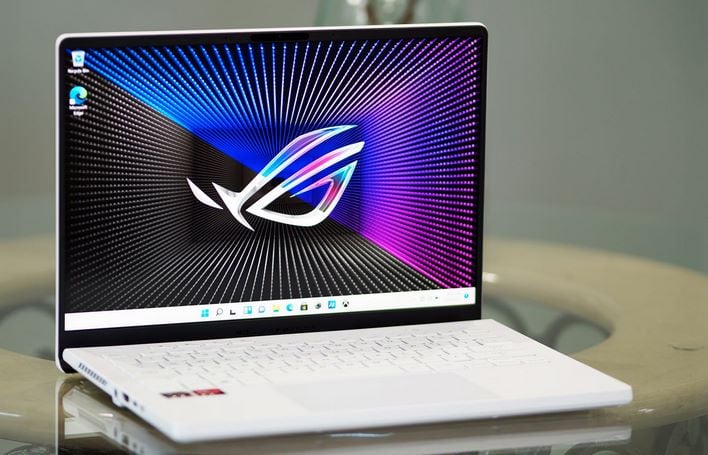 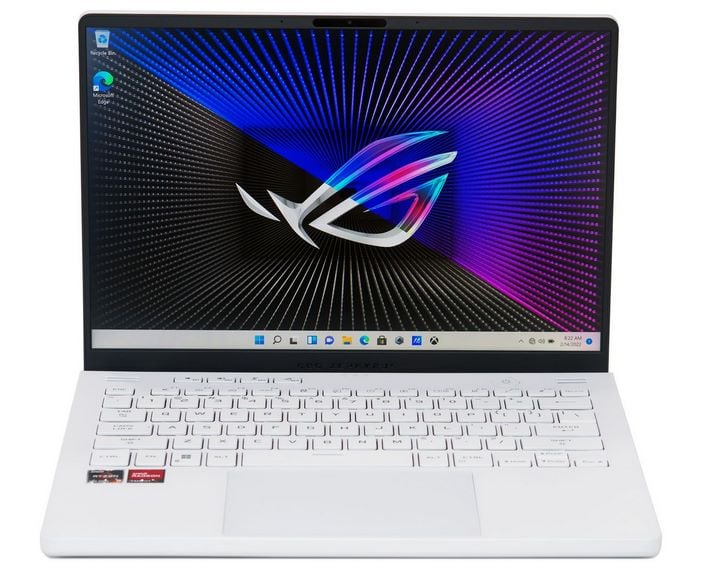 The ASUS ROG Zephyrus G14 ships in a stylish back and white box, adorned with the ASUS ROG logo, some ROG Zephyrus branding, and graphics that resemble the AniMe Matrix LED perforations on the lid (our review system was equipped with the AniMe Matrix LEDs, but there will be version of the system without it as well). The top of the box flips up to reveal the notebook underneath with another small box off to the side. Inside that box is the included 230-watt power supply / charger and a basic lit pack, and that’s about it. 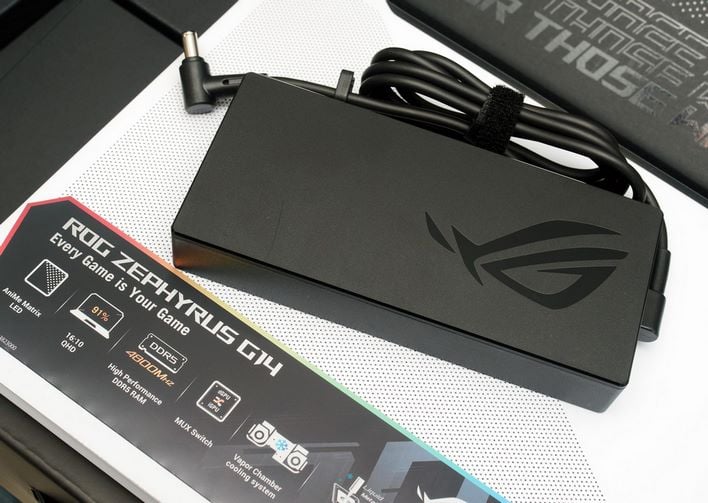 The ASUS ROG Zephyrus G14 is a refinement of its predecessor, which bears some resemblance to previous-gen offerings in the Zephyrus M and G families. The chassis on this system of built from a magnesium-aluminum alloy, with an aluminum lid, and composite bottom. The system we have here with the AniMe Matrix LED lid weighs in at 3.85lbs, and it feels sturdy and significant in-hand. In case you’re wondering, the AniMe Matrix refers at an array of LEDs built into the lid on the ROG Zephyrus G14 that can be customized to show text, scroll animations, etc. Models without the AniMe Matrix are slightly thinner (by 1mm) and also somewhat lighter (3.63lbs). 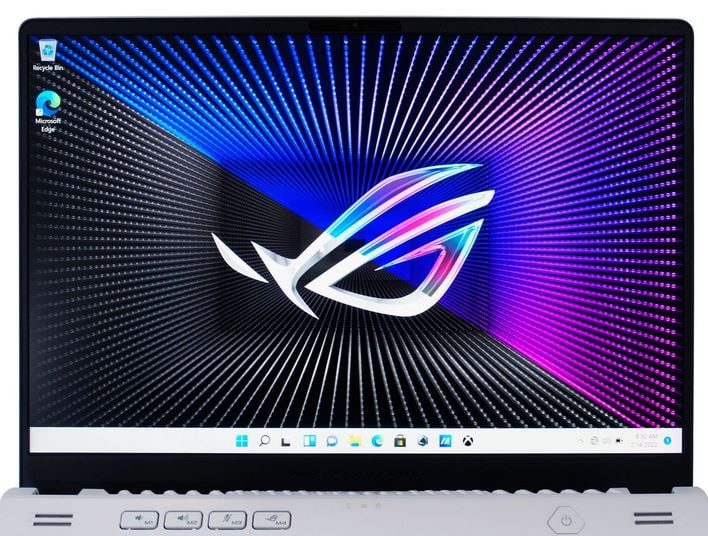 As its name suggests, the ROG Zephyrus G14 packs a 14” display. Our particular configuration features a gorgeous WQXGA panel (native resolution 2560x1600) with a 3ms response time and 120Hz refresh rate. Max brightness is 500nits. In practice, we found this display to offer very good viewing angles, and rich, accurate and balanced color reproduction. The screen is also nice and bright; we measured 412lux at maximum brightness at the center of the display.

Though this machine targets gamers, its design language is somewhat understated and nowhere near as gaudy as most other gaming-oriented notebooks – when the AniMe Matrix LEDs are disabled at least. When that feature is enabled, and the lights are blaring, there’s no mistaking it as anything other than a gaming notebook. Our sample is white, but systems will also be available in Gray.

The ASUS ROG Zephyrus G14 features a clean keyboard deck and a stylized lid with multiple perforations and a small ROG badge in one corner. The keyboard is spaced out nicely and offers good tactility and key travel. We did experience some keyboard flex if we pressed the keys particularly hard, but it is minimal and nothing to be concerned about. 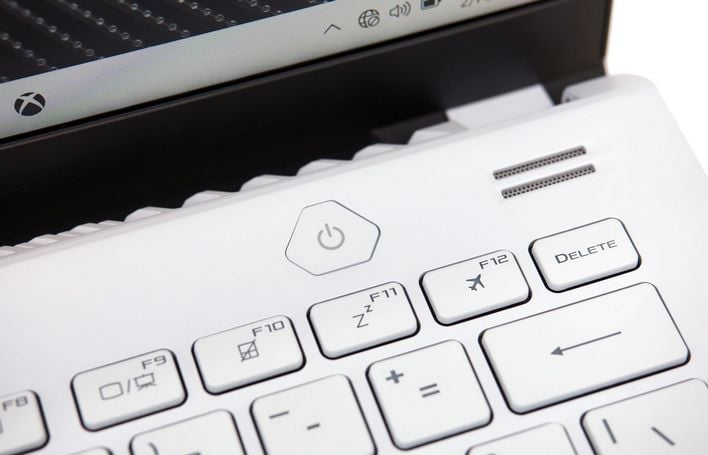 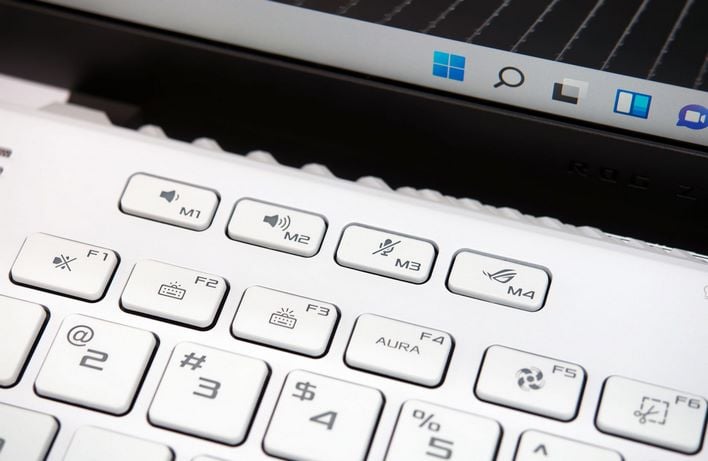 Off to the sides of the keyboard are a couple of speaker ports, for two of the system’s built-in speakers, and at the top are a trio of volume keys and a ROG key for quickly launching ASUS ROG Armory Crate (more on that in a bit). A trio of status LEDs are centered at the very top of the deck and at the upper-right is the power button. A good-sized touch-pad is centered at the bottom. We found the touch-pad to work quite well. It delivers responsive click-action for left and right clicks and performed perfectly mousing around the desktop, recognizing gestures, etc. with good palm rejection.

There is a decent array of ports and connectivity options available on the ROG Zephyrus G14. On the left side of the machine you’ll find the barrel-type power port, an HDMI output, a USB 3.2 Gen 2 Type-C port with DisplayPort 1.4 and power delivery, and a 3.5mm audio jack. And on the right side of the machine you’ll find a microSD card slot, another USB-C port, and a pair of USB 3.2 Gen 1 Type-A ports. There is no RJ45 LAN port, which is kind of a bummer for serious gamers, but that’s easily remedied with a dongle if the need arises.

The bottom of the ASUS ROG Zephyrus G14 isn’t particularly attractive. A number of screw holes run around the edges and through the middle, there are two large rubber anti-skid pads front and back, which span the entire width of the system, and there are a myriad of perforations to aid in cooling and for another pair of down-firing speakers. 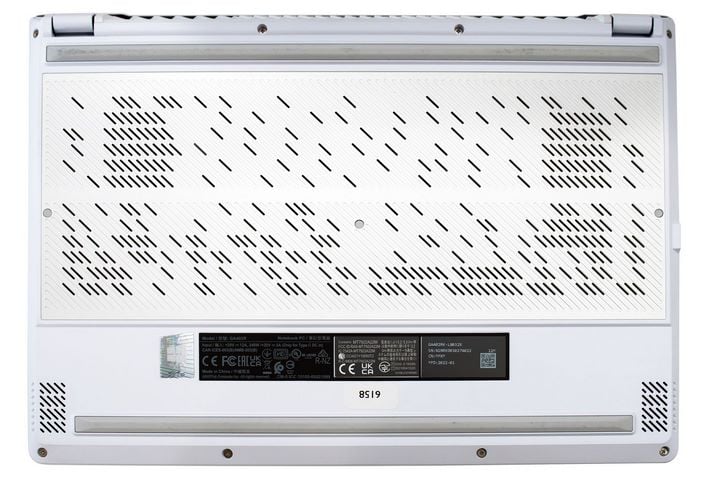 When you open the ROG Zephyrus G14’s lid beyond 90 degrees, its bottom edge will make contact with the surface the system is resting on and elevate the bottom of the system by up to 1.5cm. Lifting the bottom of the system is meant to improve the typing angle, enhance airflow into the vents, and enhance the effectiveness of the speakers (ASUS calls the feature ErgoLift). While we're on the subject of speakers, we should also mention that the audio output from the ASUS ROG Zephyrus G14 is very good, especially for a notebook this size. Volume levels are quite good, but as is typically the case with small notebook speakers, don't expect a ton of bass. If you’re gaming, a good headset is a must. 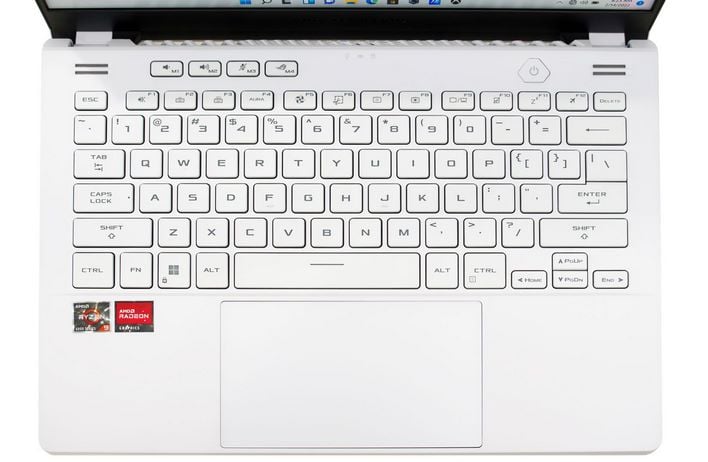 Networking and wireless connectivity is handled by a MediaTek Wi-Fi 6E MT7922 160MHz wireless LAN controller. The MediaTek MT7922 has a 2x2 MIMO configuration, so getting top performance from today's latest routers should be no problem. There's also Bluetooth 5.2 support on board. What is absent, however, is any wired networking. If you want to connect this system to a wired network, you'll have to use a USB dongle.

ASUS ships the ROG Zephyrus with a fairly clean Windows 11 installation that’s mostly devoid of bloatware. Thankfully, there was no annoying anti-virus / anti-malware pop-ups to deal with, though users will be nagged to register the system through the MyASUS program. Other than that, though, ASUS includes a few utilities to help users customize and monitor their systems and get the most of out the machines. 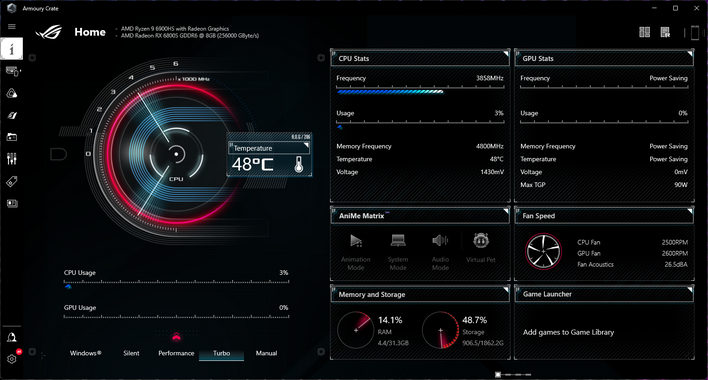 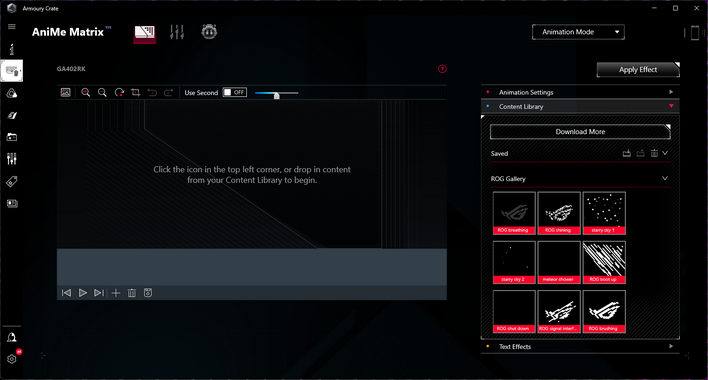 Along with the hardware health and monitoring functions, current settings can be viewed via the radar chart and switched via the buttons directly below. The default profile for the machine is ‘Performance’ mode, but users are also offered Turbo, Silent, Windows, and Manual Operation modes.

Users can also connect their mobile devices to the laptop via ASUS’ app and adjust Armory crate on the fly as well if you'd like.

And with all that hardware mapped out, let’s get on with some benchmarks…