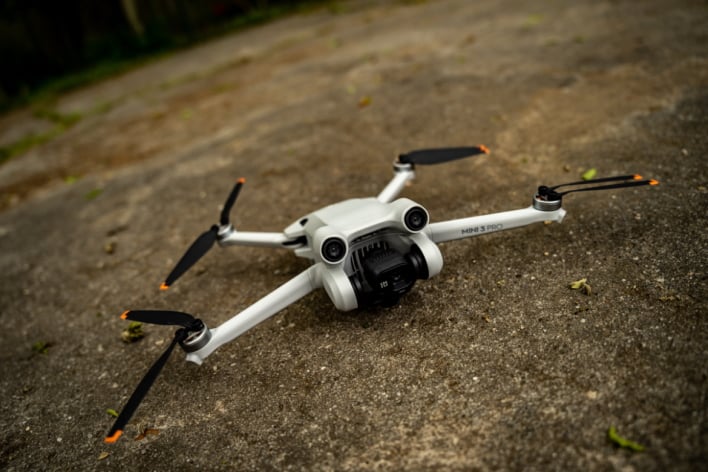 When we reviewed the DJI Mavic 3 last year, we came away impressed, and rightfully so, because it was a great product. The new DJI Mini 3 Pro we'll be showing you here today, however, has essentially redefined expectations for a sub-250g drone. Nothing was left untouched in the Mini 3 Pro and virtually every aspect has been upgraded.

The DJI Mini Series has been catering to the entry-level consumer drone market for several years now. DJI continually innovates with the Mini series and regularly ups the ante at its targeted weight and price points. This particular drone segment is extremely important to not only DJI but the drone community in general, since it falls below the 250g weight barrier. This is an important category, because many places around the world have a hard limit on consumer drone weight at 249g. Even in the USA, there are restrictions on drones like this, albeit not as strict as larger drones; you'll just need to register a >249g drone with the FAA and put a registration number on the drone itself. But, not everyone wants to fiddle with those restrictions and they just want to fly and see the world from above, and that's where the DJI Mini 3 Pro comes in.

DJI Sent over the Mini 3 Pro with both controllers and a few batteries for us to work with. Let's take you on a quick guided tour of the Mini 3 Pro before we dig in, and then we'll continue on and detail our experience with this mini drone...

What's included with the DJI Mini 3 Pro will obviously depend on which bundle you opt for. As mentioned, there is an option for just the drone in the DJI Mini 3 Pro (No RCC) for $669. In addition to the Mini 3 Pro that bundle includes a single battery, one spare set of props, a gimbal protector, a USB Type-C power cable, a screwdriver, and some screws. It's essentially everything you need to get started minus the transmitter. This is a fine option if someone already owns a transmitter and just wants to upgrade the drone or add a Mini 3 Pro to the mix. 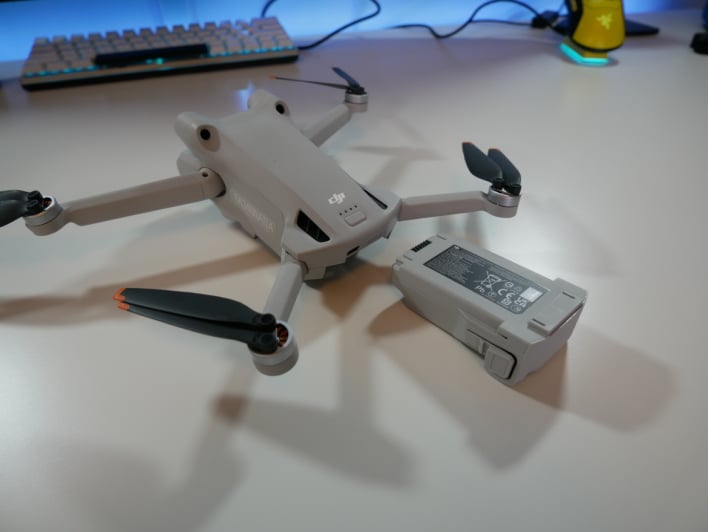 For $759 the full DJI Mini 3 Pro kit (DJI RC-N1) includes everything mentioned above, plus the tried and true familiar DJI transmitter that straps to a smartphone. It's a good option for those who don't already own a radio, because the drone can't be flown otherwise.

The DJI Mini 3 Pro kit (DJI RC) will set you back $909, but it includes the new control transmitter, which we think is a game-changer for newcomers and professionals alike and is well worth the extra asking price. This is the new transmitter that includes a built-in 5.5" touch screen that eliminates the need to use a phone. A compact and easy to carry drone like the Mini 3 Pro is perfectly complemented by the DJI RC because of how quick the entire system can be deployed in the field.

But what about the customary Fly More bundle, you ask? This time around DJI has done something interesting by decoupling the Fly More kit and is offering it as an optional add-on. This allows buyers to get their hands on the initial drone package of their choice and then later get the fly more kit at a discounted price. There are two kits, the DJI Mini 3 Fly More Kit and the Plus version. Both come with two extra batteries, a triple battery charger, charging cable, two sets of props with screws, and a carry case. The basic Fly More Kit is $189 and comes with standard batteries, while the Fly More Kit Plus comes with the Intelligent Plus batteries that extend flight time up to 47 minutes, over the 34 minutes of the standard batteries

The Mini 3 Pro is nothing like the Minis that have come before it. If you place a Mini 3 Pro next to one of its predecessors, it would be hard to convince anyone that they are from the same family of products. The design characteristics are reminiscent of existing DJI drones, but the new locations for sensors as well as the redesigned folding arms alter the look quite drastically. The camera gimbal cover leaves a bit to be desired, however. If the system was more like the new DJI Mavic 3 it would have been a home run. But other than that, everything has been upgraded this go around.

The Mini 3 Pro is in line with its predecessors in terms of its physical size. Being in a sub 250g class really puts a limit on how big the drone can be after all. But that didn't stop DJI from putting massive 6" props on the little work-horse. Couple that with the 'dead cat' design of the arms and the Mini 3 Pro still delivers an impressive wingspan of 15" from propeller tip to propeller tip. Pair that massive amount of ability to move air with the incredibly light-weight of the Mini 3 Pro and it's easy to see how 30-minute flights are achievable.

Flight time isn't the only impressive feat of the Mini 3 Pro. This drone is incredibly quiet (relatively speaking) due to the motors and props not having to spin at massive speeds to get airborne and on the move. It's much quieter than the Mavic line.

The front camera assembly of the Mini 3 Pro keeps a modest profile despite having an upgraded 1-1/3" sensor, but DJI has made some significant changes for a few interesting functional upgrades. We'll dig into that shortly, but for a design point, the gimbal is now under the camera allowing for that vertical shooting and massive up-tilt feature to be possible. The front arms of the Mini 3 Pro see some significant changes over the older Mini 2 with the landing gear of the drone removed and lights added for visual line of sight aid. Landing is now handled by the underside of the body, something we were glad was changed on the Mavic 3, but it works here due to the small nature of this drone. The front proximity sensors are in full view as well, almost like a backpack sitting on top of the Mini 3 Pro, this keeps the sensors clear of obstructions and forward-facing while in active flight. 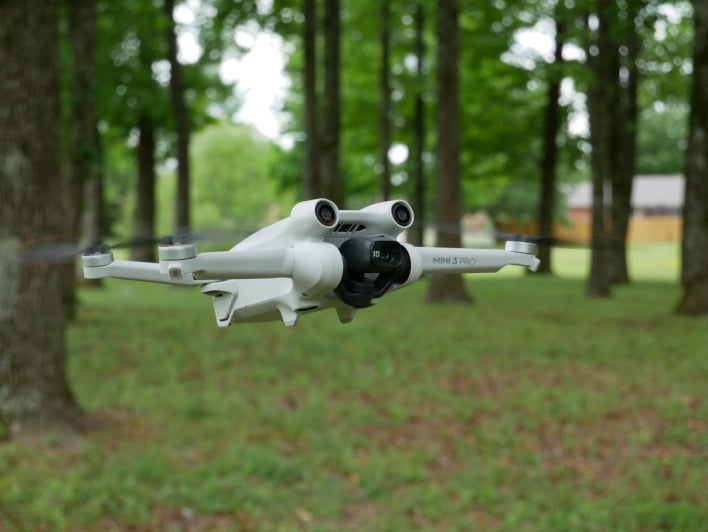 The rear of the Mini 3 Pro is where most of the user interaction will be taking place, from charging to MicroSD card handling. There are small vents along the rear that flank the power button and battery indicator lights that help keep passive air moving through the flight controller and video transmission system to keep thermals in check. At no point flying the Mini 3 Pro did we experience any thermal issues so the system handles itself quite well. The Intelligent Battery is inserted and removed through the rear like the Mini 2. The Mini 3 Pro is able to charge this battery through the onboard USB Type-C port and can be used to access the drone's MicroSD Card or internal storage for capture or for transferring data to a PC. As mentioned the MicroSD card is on the rear as well, but unfortunately it is fully exposed. This makes for easy insertion and removal of the card but also leaves it vulnerable to the elements. We would have loved to see a cover for the USB and the MicroSD ports, but every gram is valuable on this drone so their omission is understandable. 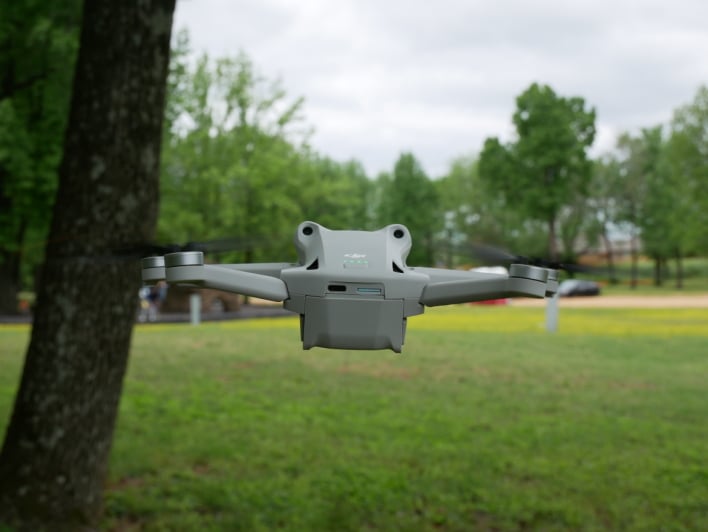 The bottom of the Mini 3 Pro is relatively uneventful except for the new massive bottom-mounted proximity sensors. Unlike the Mini 2, there is now 3-way obstacle avoidance that makes for a safer flight for the Mini Series than ever before. The landing gear is also located on the bottom side of the Mini 3 Pro, but that's about it. 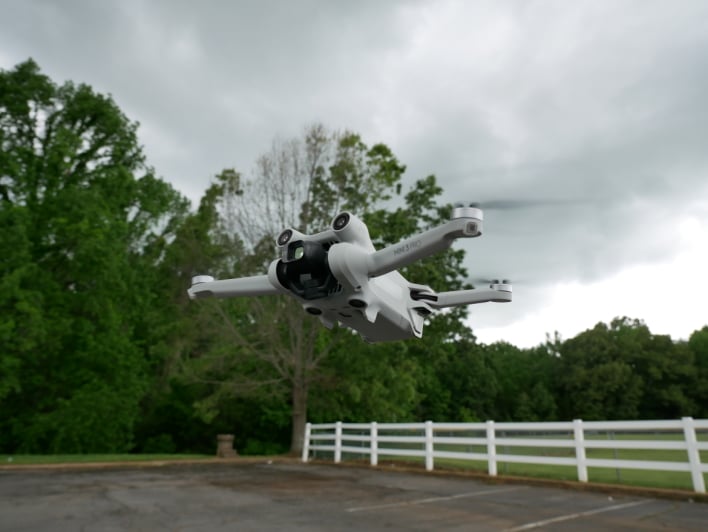 The DJI Mini 3 Pro's camera was upgraded as well. DJI stepped the sensor up from the Mini 2's 1/2.3" CMOS to a 1/1.3" CMOS sensor, that's nearly double in size. That allows for even better low light capabilities and the ability to film at up to 4K60. If 4K HDR is preferred, 4K30 is the maximum for that setting. The F-Stop has been lowered from f/2.8 down to f/1.7, which also aids in low light situations and narrows the depth of field to make for some very cinematic footage. Still images are also possible and improved significantly from 12 MP to a massive 48 MP.

For the first time ever on the Mini Series there is now the ability to use Active Track 4.0 and APAS 4.0 allowing for Master Shots. We think this is a game changer. We tested the Active Track system walking through wooded areas and even took it to a drift car event where the Mini 3 Pro was able to not only keep up with the moving targets, but also dodge trees, power lines, and other vehicles with ease. It was incredible watching the Mini 3 Pro do its thing.

For those in the Instagram and TikTok scene, the ability for the camera to rotate and record lossless vertical content is also an option.

Another great feature of the Mini 3 Pro's camera system is the new 60 degree up-tilt function. This gives film makers and photographers a whole new perspective for shots. Until now only overhead and head on shots were a thing, now shots of from under bridges or passing overhead objects can be easily captured. Another professional application is building and home inspections, as the ability to see under soffits is easily possible. 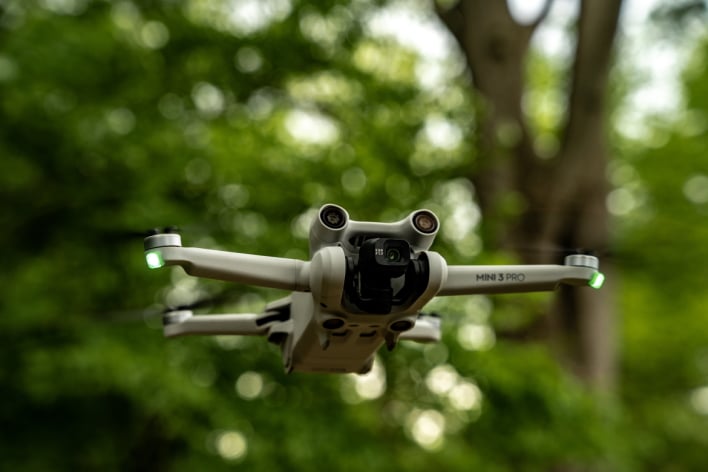 The DJI Mini 3 Pro brings real flexibility to the Mini Series with options abound. We're not going to spend time discussing the DJI RC-N1 controller, if you want to know more about that one feel free to spend time with our review of the DJI Mavic 3. What we want to focus on here is the new DJI RC controller with the built-in screen.

The layout and buttons should feel very familiar to anyone who has used the older DJI RC-N1. The face buttons are the same, with the Power Button, Return to Home, and Mode selection switch right in the center. The gimbals have gotten a nice upgrade and now feel more akin to proper drone gear. The top of the controller is home to two shoulder buttons, one for video and the other for photo. This makes switching profiles as quick as a tap, which is excellent for those gathering photos and video of events. There are also slider wheels under those buttons to control the camera tilt and zoom factor, so there's no need to take your fingers off the gimbals to make adjustments while flying. 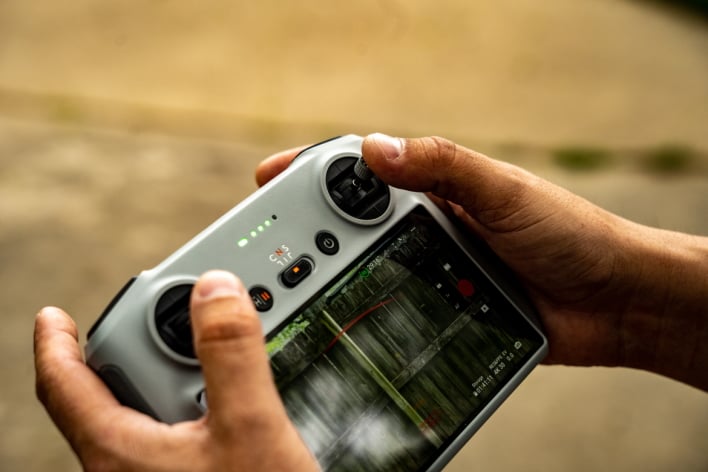 The transmission range of the DJI RC is comparable to the older DJI RC-N1, even though the antennas are now located inside the controller rather than on the extension portion that holds the phone or tablet. This could limit range somewhat, be we didn't experience any issues. We recommend the DJI RC as the best way to experience the Mini 3 Pro. The ease of deploying the system alone is worth the added cost.
NEXT PAGE