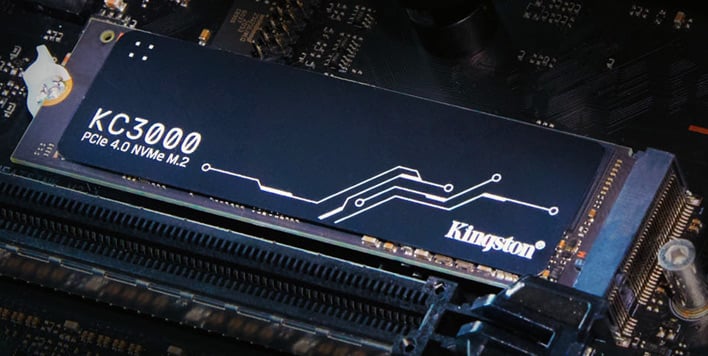 At a time when it’s exceedingly tough for enthusiasts to acquire many top-flight PC components, dashing hopes for many a fun upgrade or new build, solid state drives remain a shining beacon of hope. The SSD market has seen a consistent influx of new and updated products, addressing virtually every price bracket, with good availability across the board. At the high-end, massive performance increases have also been the order of the day, with PCIe 5 drives – set to double peak sequential performance yet again to nearly 14GB/s – due to arrive later this year. As it stand today, Phison-based drives are some of the most sought after for enthusiasts, including the Kingston KC3000 we’ll be showing you here.

The Kingston KC3000 is the latest update to the company’s enthusiast-class M.2 SSD line-up. These PCIe 4 x 4 drives feature some of the latest components available and are tuned for high-performance across an array of applications and use cases. KC3000 drives are also available in relatively high capacities, topping out at a healthy 4TB. Take a look at their main features and specifications below and then we’ll dive into some benchmarks to see how the Kingston KC3000 currently stacks up versus some other PCIe Gen 4-based competition... 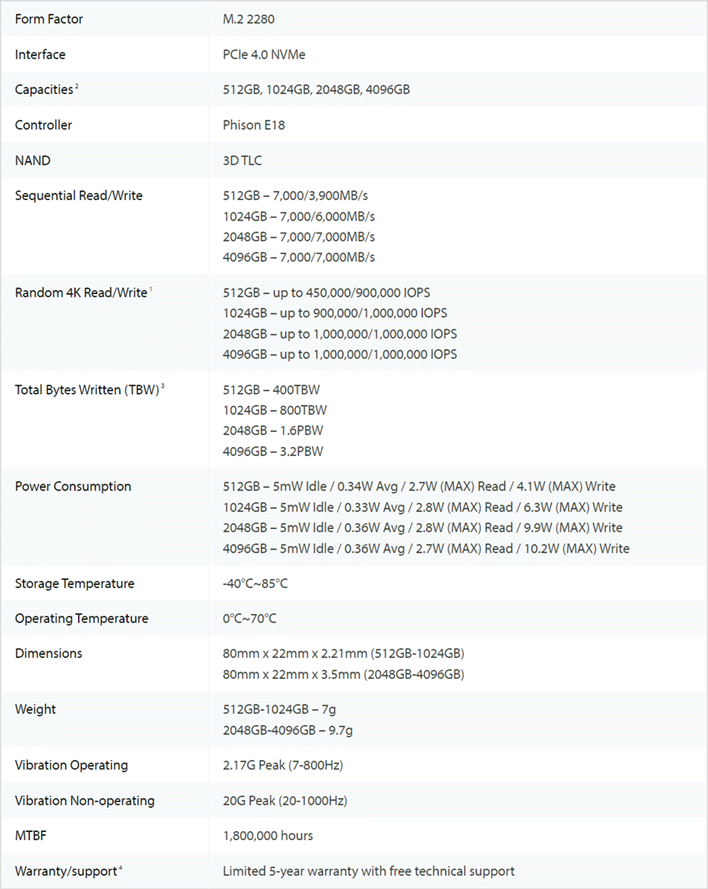 Find The Kingston KC3000 SSD @ Amazon
Similar to the overwhelming majority of NVMe M.2 drives currently on the market, the Kingston KC3000 uses the common M.2 2280 (80mm) "gumstick" form factor. Kingston utilizes an attractive, dark-colored PCB with the KC3000, and populates both sides of the board with an array of components (at least on the 2TB model we evaluated). Both sides of the PCB are covered, however, either by a stylized graphene/aluminum heatspreader (top) or by large decal (bottom) adorned with all of the drive’s pertinent data and branding.

The foundation of the Kingston KC3000 is an 8-channel Phison E18 controller, which is common among today’s top PCIe 4 SSDs. That controller is paired to some Kingston-assembled and branded Micron 176-Layer 3D TLC NAND Flash memory operating at 1600MT/s, a few pieces of DDR4-1600 DRAM cache, and a customized Kingston firmware. Other features of the drive include a PCIe Gen x4 interface and support for the NVMe 1.4 specification. Unlike the older KC2000, however, the KC3000 doesn’t support TCG Opal or some other encryption and security technologies.

The ultimate performance of the Kingston KC3000 will vary somewhat depending on the capacity of the drive being tested. We are looking at a 2TB drive here. Kingston rates the drives for up to 7,000 / 7,000MB per second reads and writes, respectively, with up to 1M read and write IOPS. The lower capacity 1TB drive, however, peaks at 6,900MB/s writes and the 512GB drive 3,900MB/s. Endurance for the 2TB drive we have here is rated for 1.6PBW, though that number also shoots upward or downward depending on the total capacity. Kingston also backs the drives with a full, five year warranty. 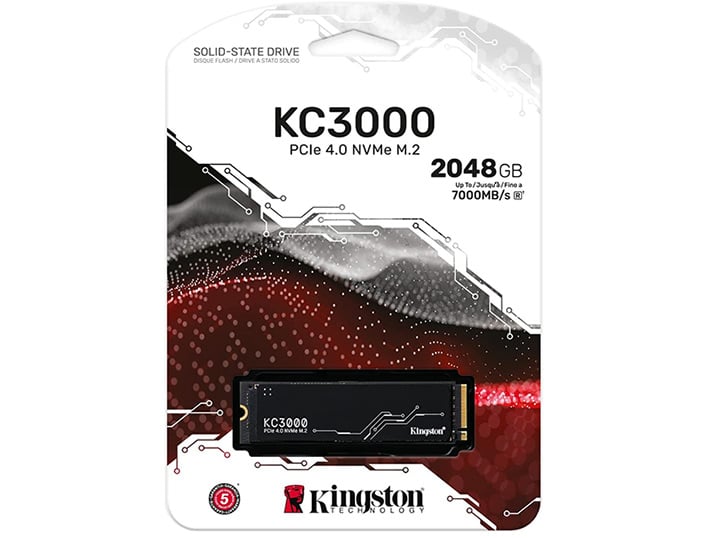 The specs for the KC3000 look all look great, but that doesn’t mean much if its measured performance isn’t good, so let’s get to some testing... 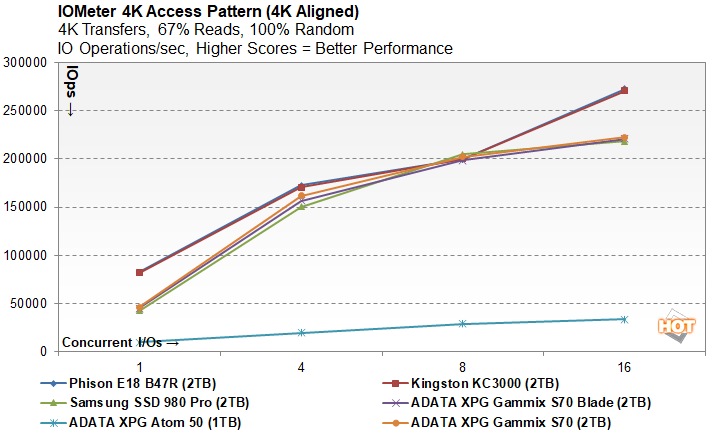 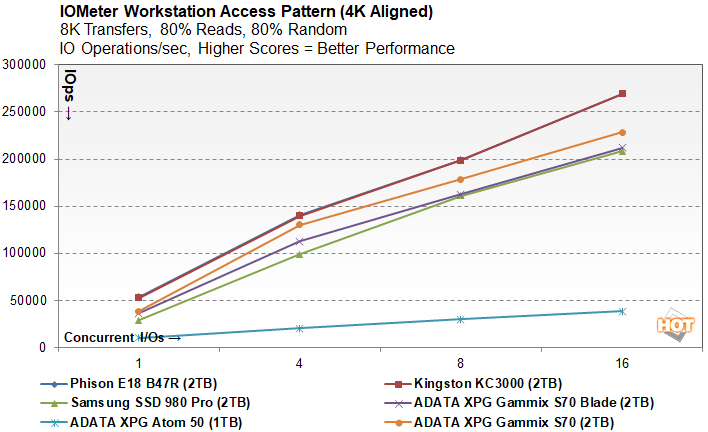 The Kingston KC3000 offered class-leading performance across both access patterns and at every queue depth we tested. The Phison E18 B47R reference drive was right there alongside it, but that's not a drive you can buy -- it was a test vehicle provided by Phison.

These numbers represent the average bandwidth for the drives we tested in both access patterns, across every queue depth. As you can see, the Kingston KC3000 finishes near the top of the charts, significantly outrunning the Samsung and Innogrit-based ADATA drives. 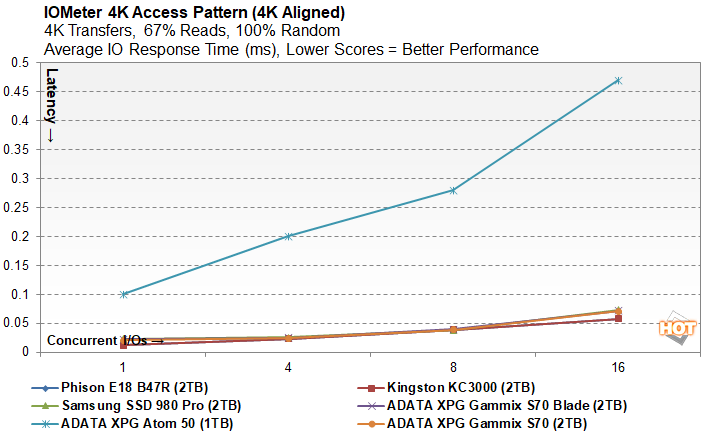 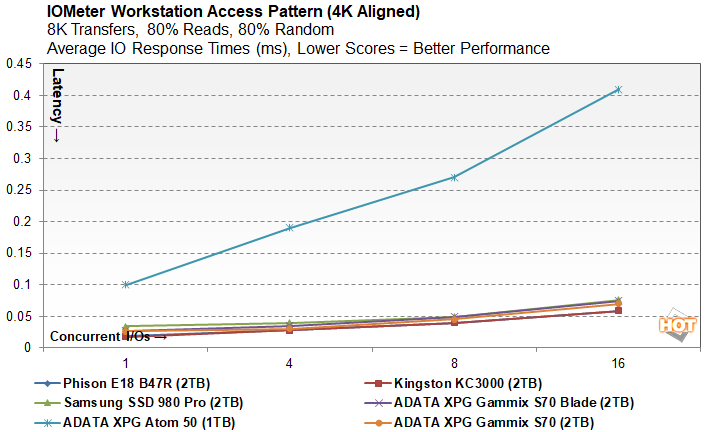 Our latency results also show the Kingston KC3000 offering some of the best latency characteristics across the board. With both access patterns and at every queue depth, the KC3000 performed exceptionally well. 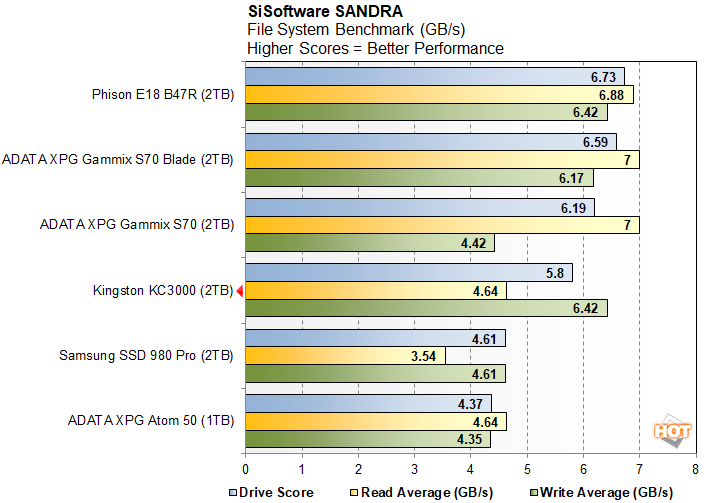 The SANDRA file system benchmark didn't seem to play well with the Kingston KC3000. We were expecting performance similar to the Phison E18 reference drive, but the Kingston drive's read result consistently trailed the Phison E18 and Innogrit-based drives. It had no trouble outrunning the Samsung drive, though. 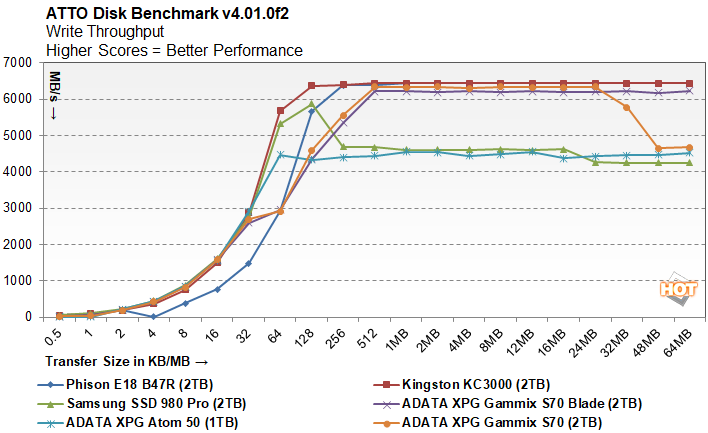 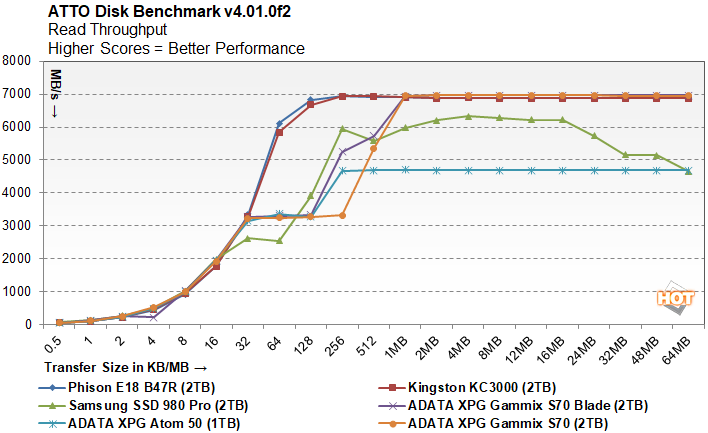 The Kingston KC3000 didn't quite hit its rated write speed of 7GB/s in ATTO, but it did clear that mark in the read tests and offered leading performance across the board. 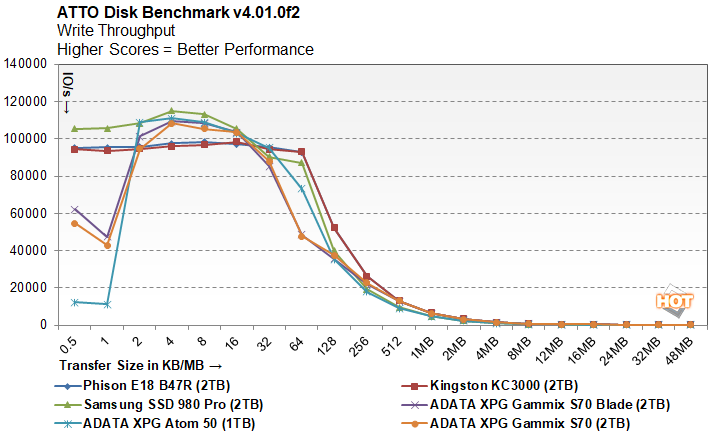 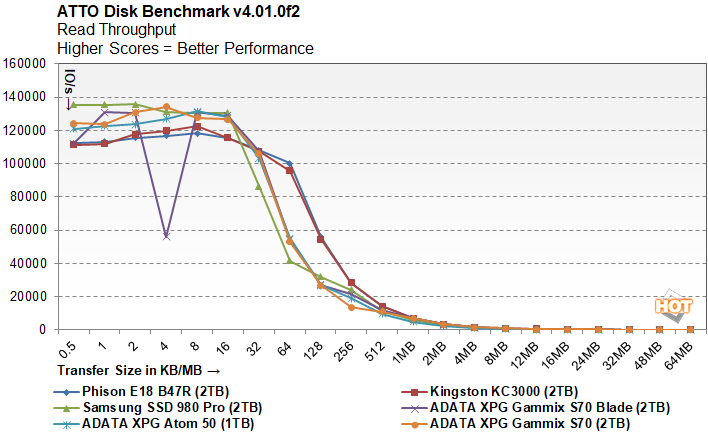 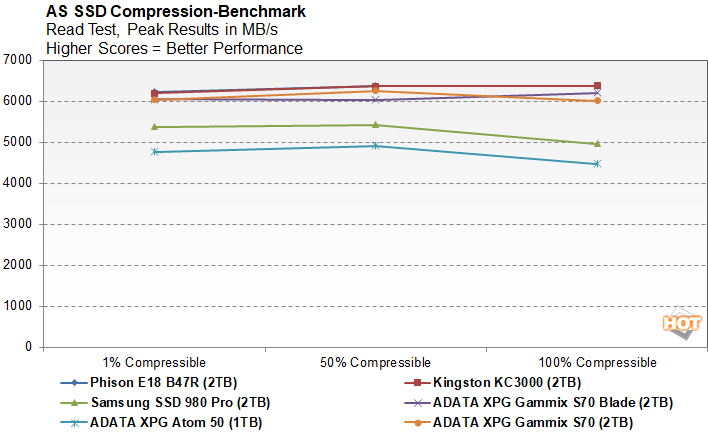 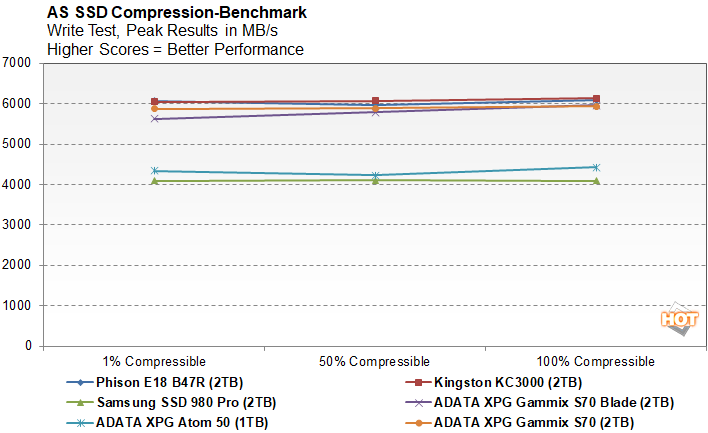 The compressibility of the data being transferred across the drives we tested had minimal impact on performance. And yet again, we see the Kingston KC3000 offered class-leading read and write performance.