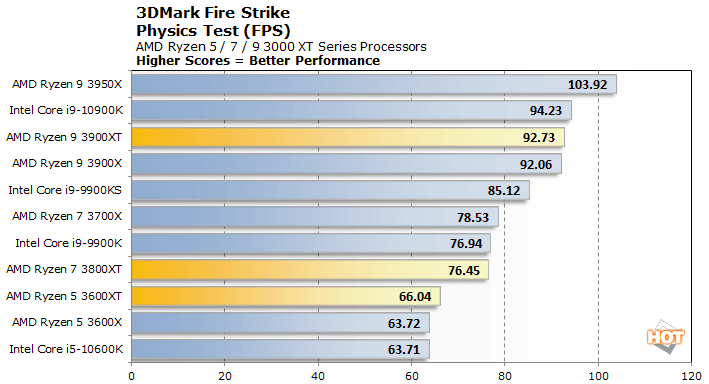 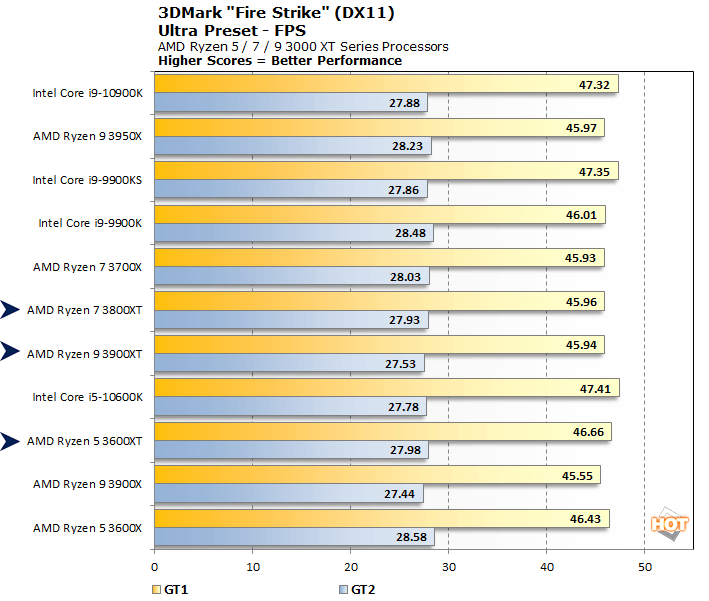 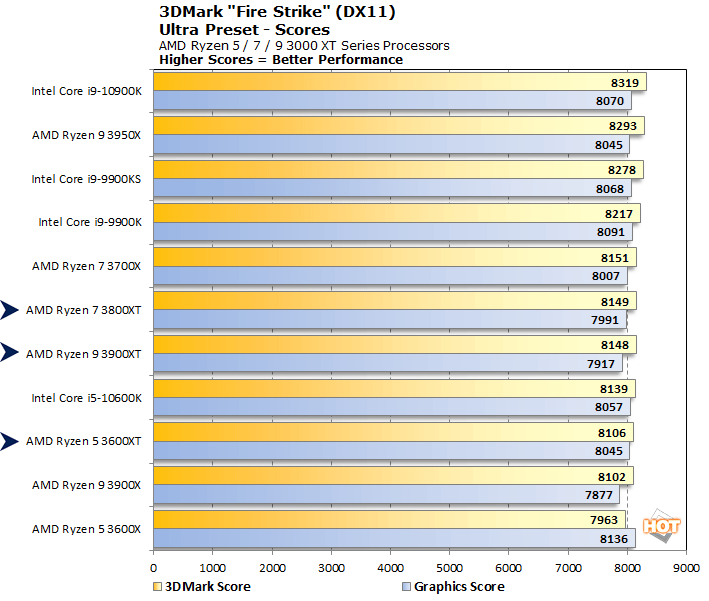 With the taxing Fire Strike Ultra benchmark, which is mostly GPU bound, very is very little that separates all of the processors we tested. The small differences you see here fall well within the margin of variability in this benchmark. 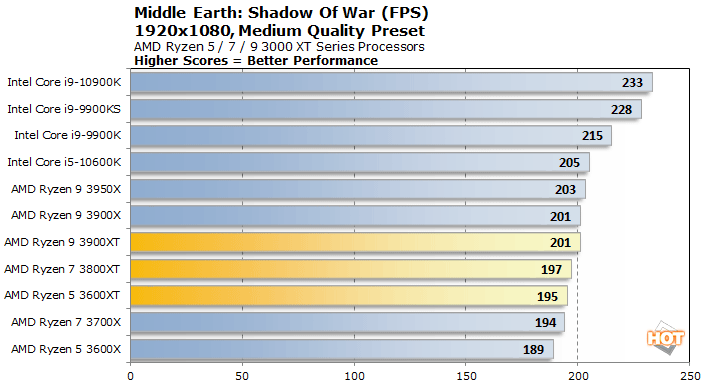 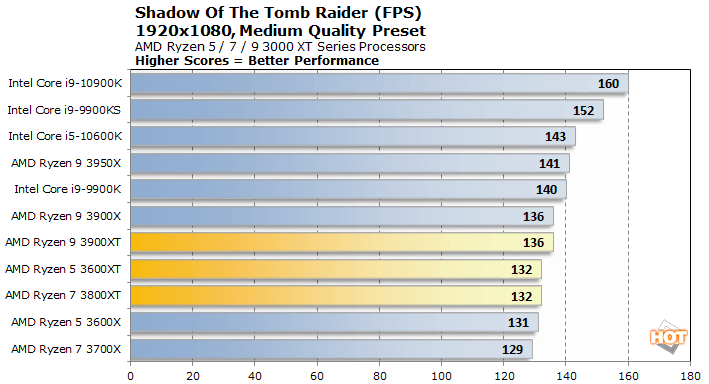 The medium-quality, high-framerate 1080p in-game tests also how the Core i9-10900K performing exceptionally well, leading the pack in both games, with the new Ryzen 3000XT series processors coming in slightly ahead of, or right on par with their predecessors. 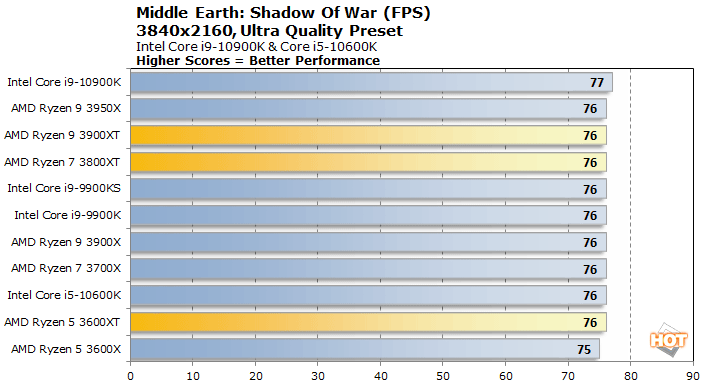 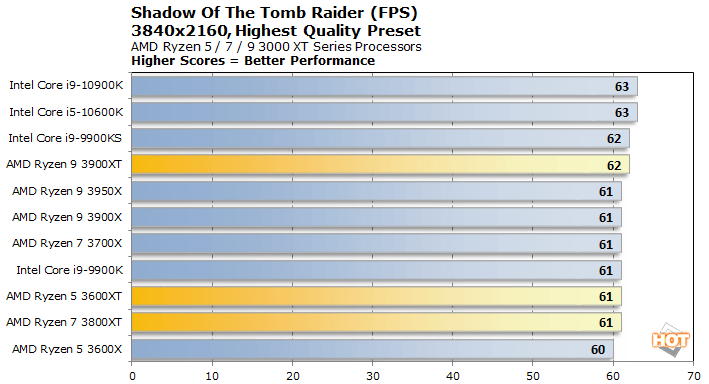 When you crank up the resolution and image quality, however, and shift the performance bottleneck onto the GPU, things balance-out considerably and the results blur. All of these processors are plenty fast enough to keep up with the GPU with these game titles running at 4K resolution.
We also spent some time overclocking the AMD Ryzen 9 3900XT, to see if we could wring any additional performance from the processor. AMD offers an array of tools for overclocking 3rd Generation Ryzen 3000 series processors, including simple methods like Precision Boost Overdrive and Auto-Overclocking via Ryzen Master, or manual overclocking via the BIOS.

Because the processors are unlocked, overclocking it is simply a matter of altering a few multipliers, tweaking voltages, and dealing with the additional heat and power requirements. These processors can also be overclocked by adjusting base clock frequencies though, so it's possible to really fine tune the end result. 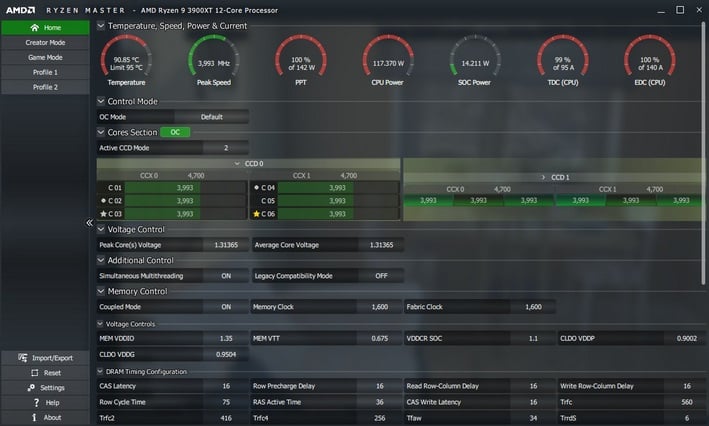 We took a somewhat conservative approach to overclocking the Ryzen 9 3900XT to give you all an approximate “worst case scenario”. Our results should be repeatable, assuming you’ve got similar hardware and everything is working properly. You shouldn’t need exotic cooling to pull off what we did here -- we used AMD's Wraith Prism cooler with the motherboard and processor installed in a mainstream NZXT mid-tower. Of course, more exotic cooling will result in higher overclocks, but its not a necessity to achieve some significant performance gains. Keep in mind though, that overclocking will void your warranty -- even if using something as simple as PBO (Precision Boost Overdrive), but that hasn't stopped you before, has it? 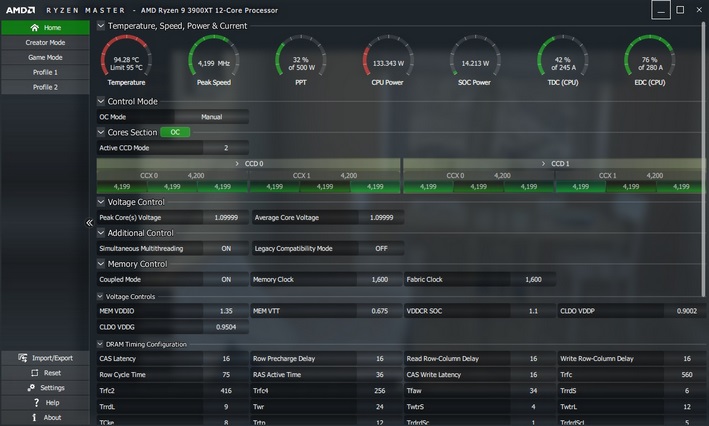 To see what our chip could do, we manually cranked the core voltage up and shot for a 4.2GHz (42x100MHz) all-core overclock, which worked without incident. We then moved up to 4.3GHz, but we couldn't get the system stable. At this speed, the chip's temps were quickly shooting into the mid 90-degree range when under sustained load, and our test rig would often shut down. So, we backed down to 4.2GHz all-core for the numbers you'll see below.  We should note, idle temperatures were relatively cool and stayed in the upper 30's, however.

Over and above our manual overclock, to gather some additional data, we also tried the Auto-Overclock feature and enabled PBO in Ryzen Master to see how they affected performance with our setup. 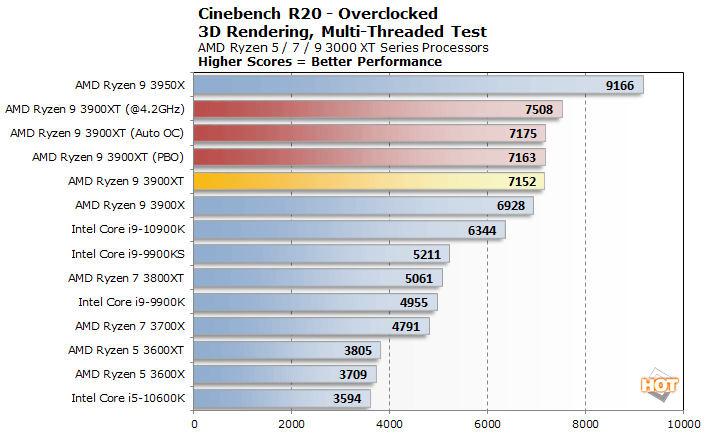 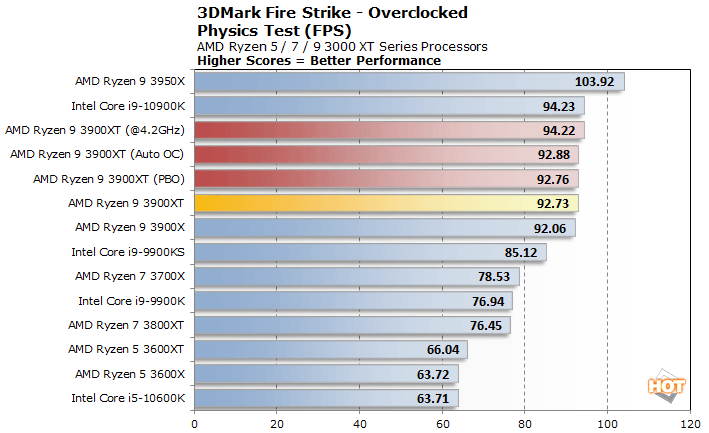 Auto-OC and PBO had a minimal impact on performance. Manually overclocking and pushing all of the cores to 4.2GHz results in some modest gains. While we had the chip overclocked, we re-ran a couple of benchmarks and saw some nice performance improvements. We gained nearly 400 points in Cinebench and 3DMark's Physics test showed the overclocked Ryzen 9 3900XT performing right on par with the more expensive Core i9-10900K. 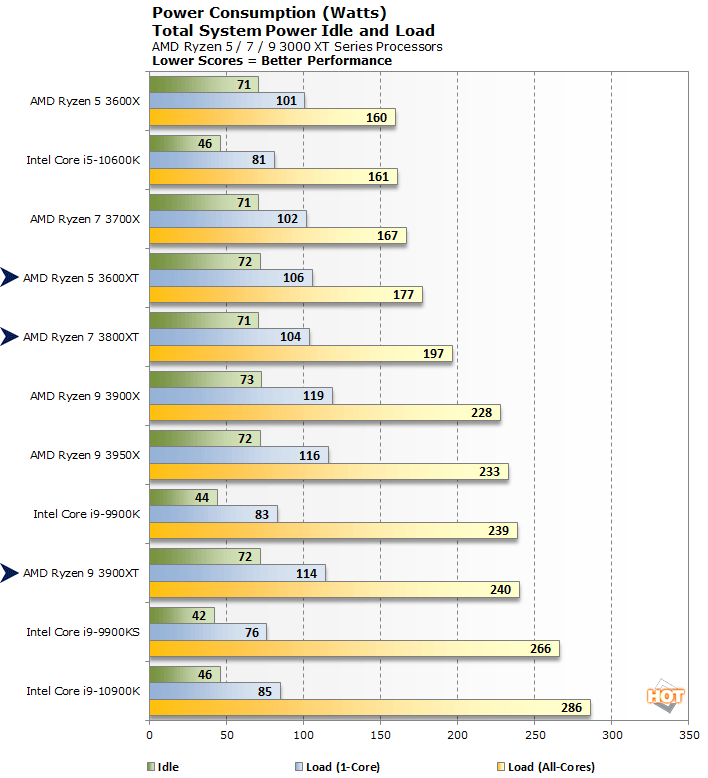 The new Ryzen 3000XT series' power consumption characteristics didn't reveal any big surprises. All three of these processors are a few percentage points faster than their "non-XT" counterparts, and they all consume somewhat more power. Idle power is essentially unchanged, but load power shows the XTs sucking a little more juice from the wall.

We also monitored power while overclocked and saw only a marginal increase in power consumption with PBO (or AutoOC) enabled of 17 watts (we didn't graph PBO and AutoOC separated becaase they produced the same result). Manually overclocking, however, resulted in a 40W increase in total system power versus the Ryzen 9 3900XT's stock configuration.