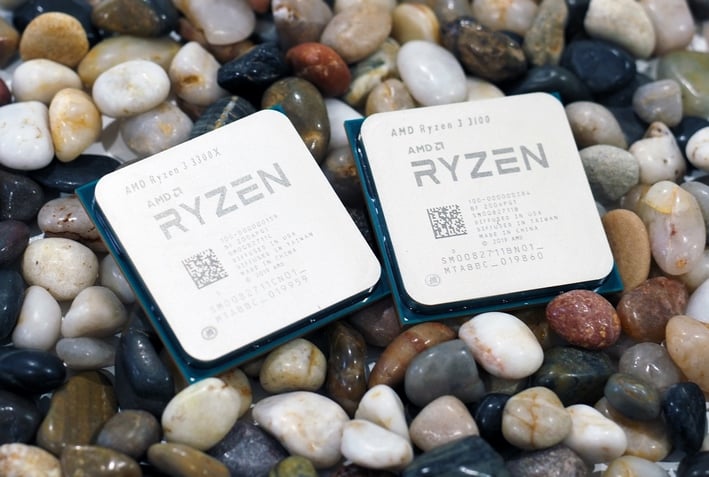 AMD announced a pair of new Ryzen 3 processors a couple of weeks back, designed to drive its Zen 2 microarchitecture down into even more affordable price points. These new processors, the Ryzen 3 3100 and Ryzen 3 3300X, are the latest entry-level, quad-core processors in the Ryzen family. Over and above disabling a few cores and tweaking clocks, however, AMD’s got a couple of additional tricks up its sleeve with these new CPUs – more on that in just a bit.

In addition to the processors, AMD also announced the new, lower-priced B550 chipset is coming to an array of affordable Socket AM4 motherboards. Like the flagship X570 that launched alongside higher-end Ryzen 3000 series processors, the B550 incorporates some high-speed USB ports and IO, but it is scaled back considerably, it interfaces with the processors over PCIe Gen 3 links and its general purpose PCIe lanes are Gen 3 as well.

We’ve got a lot more to cover before digging into the benchmarks, so let’s get rolling with an outline of AMD’s updated product stack and then get down and dirty with some speeds and feeds... 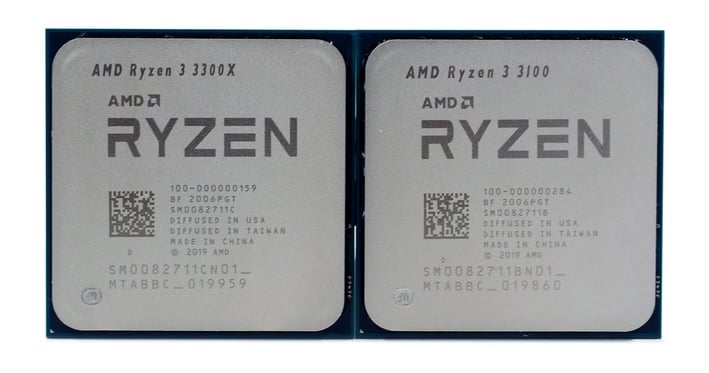 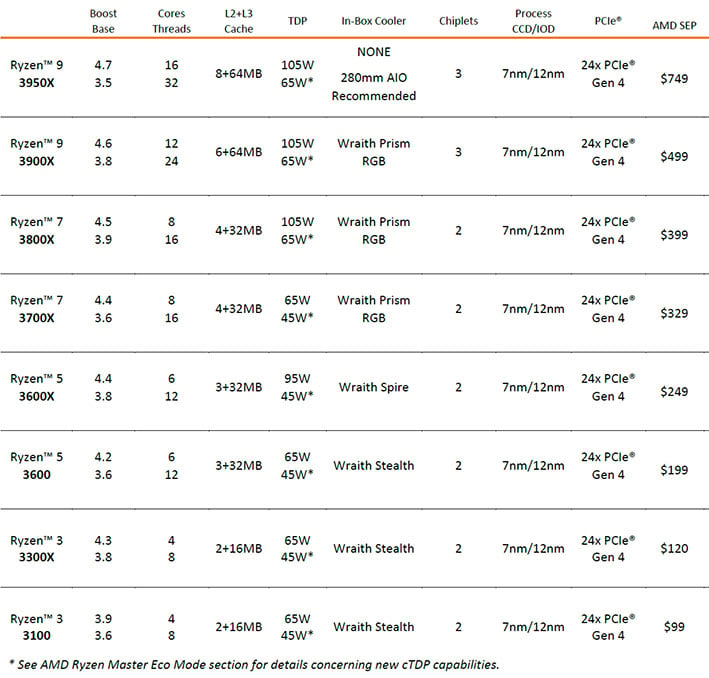 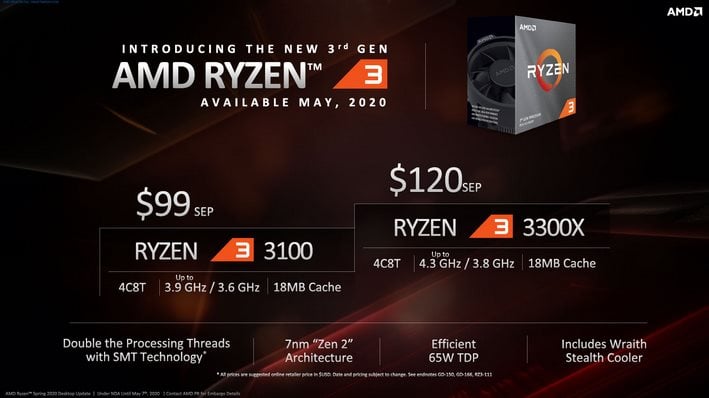 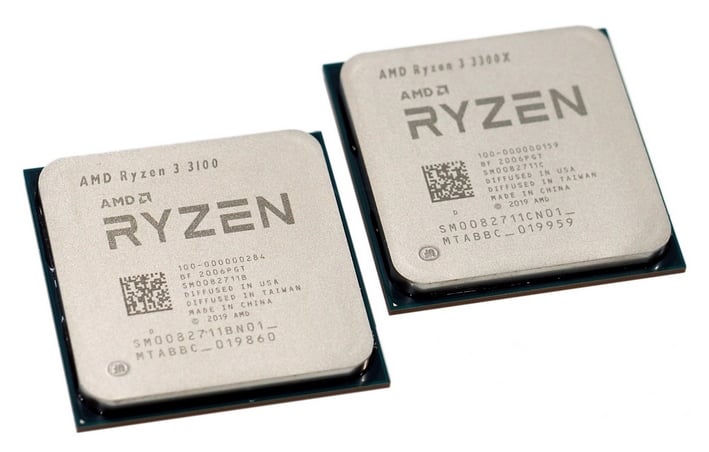 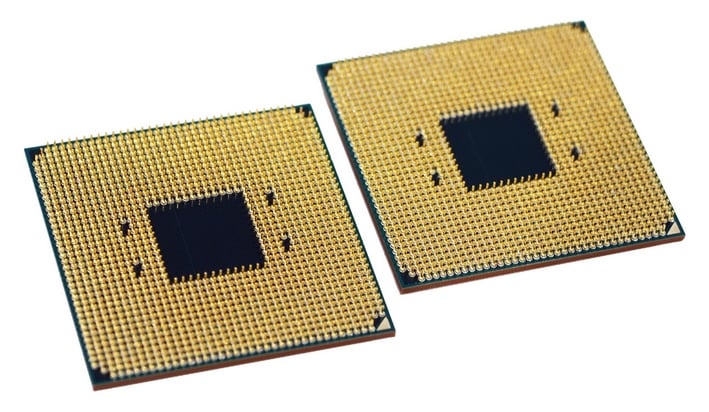 Physically, top and bottom, there’s nothing to tell the processors apart other than their branding. These CPUs are designed for Socket AM4, just like all of the other mainstream AMD Ryzen 3000 series parts, and have that familiar heat-spreader setup and pin-out we’ve all seen for multiple processor generations. 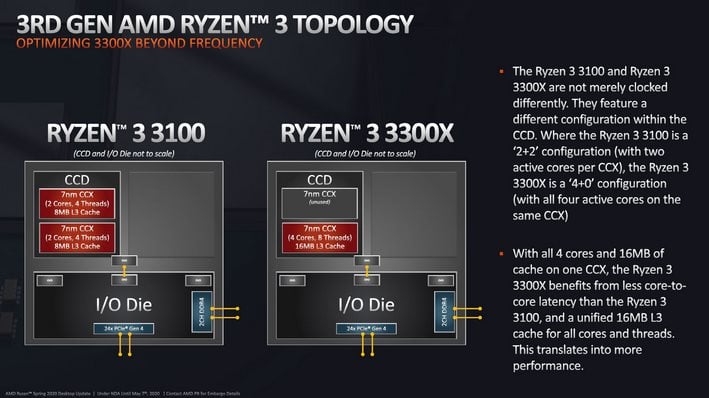 Internally, however, these two processors are somewhat different. With previous-gen Ryzen processors, AMD has always used a multi-CCX configuration, with X-number of cores enabled per CCX. And this is the case with the Ryzen 3 3100. As we’ve mentioned many times in previous articles, Ryzen 3000 series processors are built from multiple 7nm 8-core dies, linked to a 12nm IO die using AMD’s Infinity Fabric technology, all on a single package – check out this article for more details regarding the Ryzen 3000 series architecture and chip topology.

The Ryzen 3 3100 is setup in a 2+2 configuration, there two cores that are active per CCX. The Ryzen 3 3300X, however, has a 4+0 configuration, with all of its active cores residing on a single CCX. With its cores configured this way, there is lower core-to-core latency, because data doesn’t have to jump across the fabric to another CCX like it would with the 3100. Another benefit is that its 16MB of L3 is configured in a single pool, versus two 8MB segments in the 3100. These differences should result in better overall performance for the 3300X, over and above just having higher clocks. 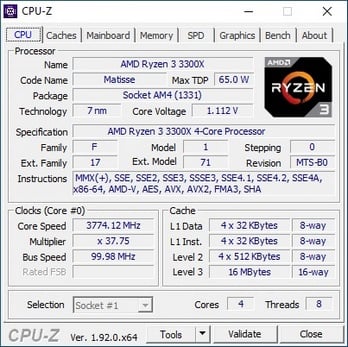 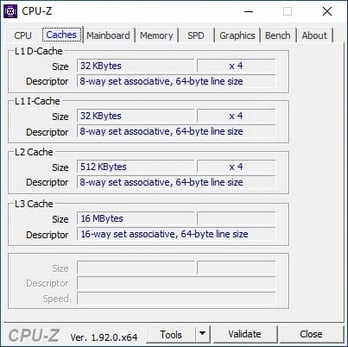 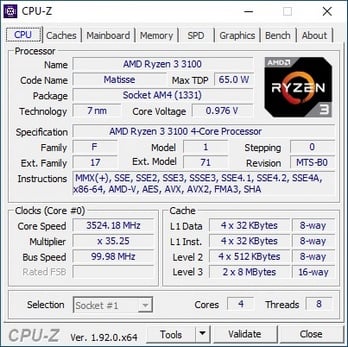 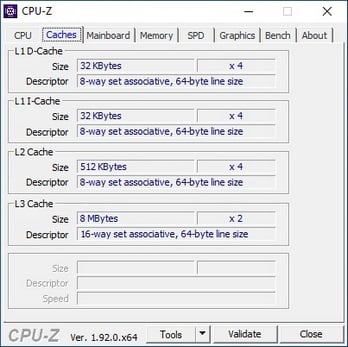 The CPU-Z details don’t reveal anything new in regard to steppings or revisions. These processors employ the very same slices of silicon as other Ryzen 3000 series processors. What you will notice, however, is confirmation of the L3 cache configuration mentioned above (1 x 16MB on the 3300X, 2 x 8MB on the 3100). We should also note that CPU-Z is reporting a 65W TDP for these processors, which is their default configuration. They can also be configured for a 45W ECO mode should you want to save some power. The Ryzen 3 3100 has base and boost clock of 3.6GHz and 3.9GHz, respectively, whereas the Ryzen 3 3300X is clocked significantly higher at 3.8GHz (base) and 4.3GHz (boost). 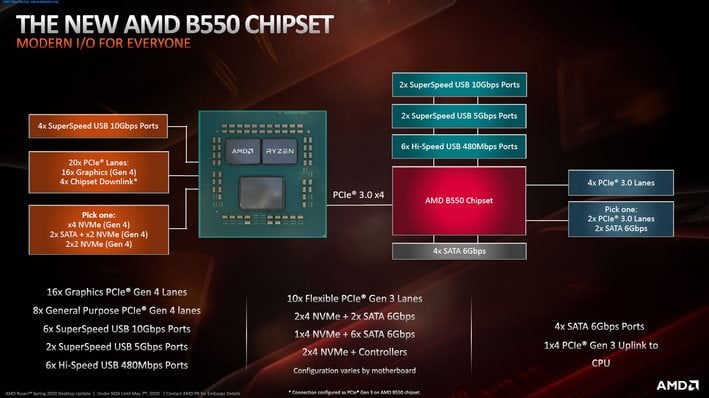 In addition to the new processors, AMD has introduced the B550 chipset. As discussed, B550-based motherboards will use Socket AM4, but unlike existing X570-boards, they will have limited support for PCIe Gen 4.0. While you can use PCIe 4.0 graphics cards like the Radeon RX 5700 XT and PCIe 4.0 SSDs at full-speed, while they're hanging off the processor, the actual chipset uplink and general-purpose lanes coming from the B550 itself are limited to PCIe 3.0 speeds. Given the budget-oriented positioning of the B550 chipset this shouldn’t be much of an issue, however. According to AMD, B550 motherboards from partners like ASUS, Gigabyte, MSI and Biostar will be available on June 16th.
NEXT PAGE