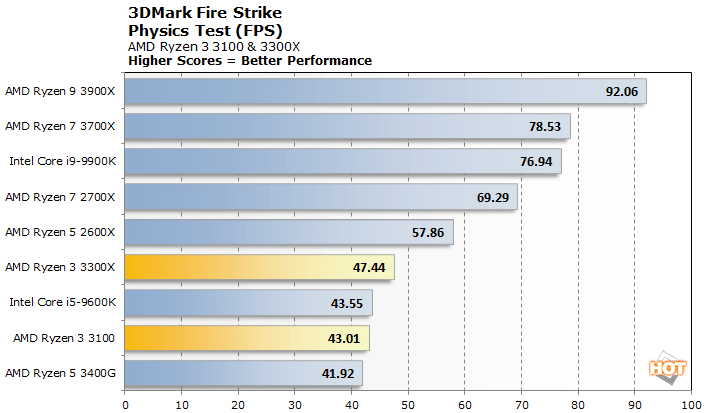 The quad-core AMD Ryzen 3 3100 and Ryzen 3 3300X can't offer quite the same levels of performance as the higher-core count processors in this multi-threaded tests, though they do sandwich the Core i5-9600K -- remember, the 9600K is a 6-core processor, but without Hyper-Threading, so it can only process six threads simultaneously, versus eight on the Ryzen 3s. 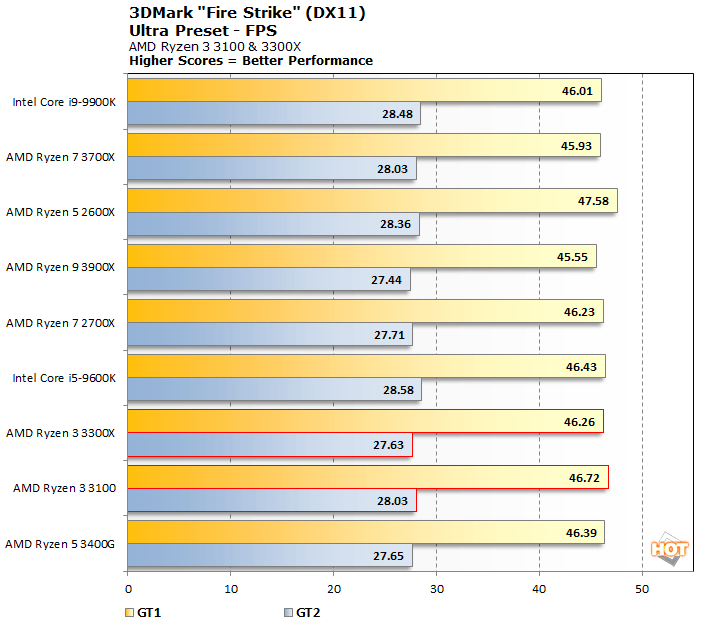 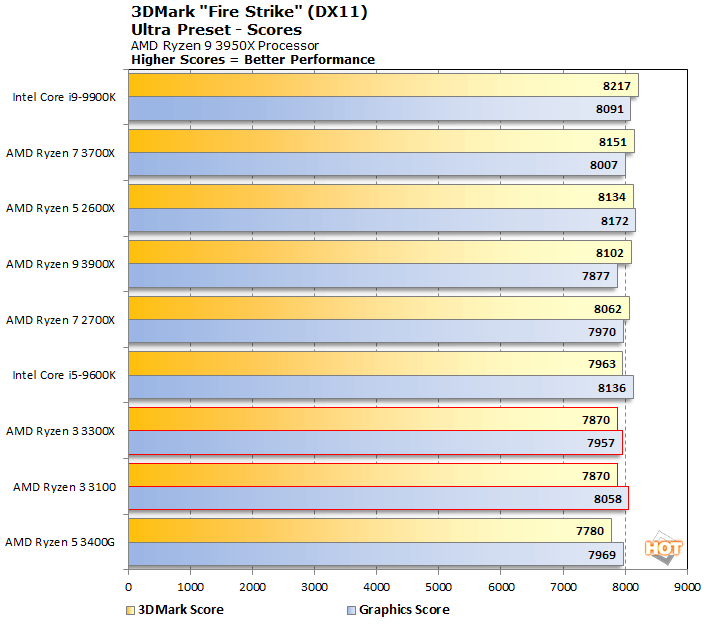 In the more GPU-bound 3DMark Fire Strike Test, we return to the performance trend we've seen throughout much of this article. The Ryzen 3 3100 and Ryzen 3 3300X manage to outpace the Ryzen 5 3400G, but finish just behind the Core i5 and higher-core count, previous-gen Ryzen processors. 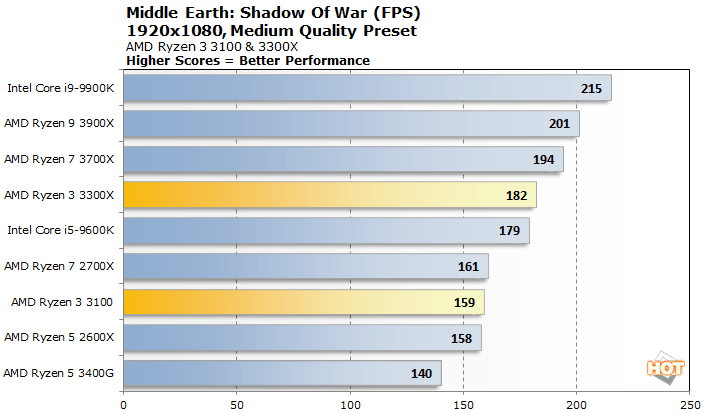 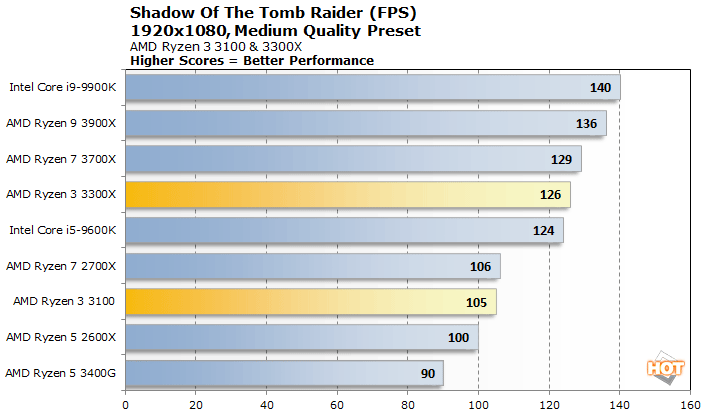 The medium-quality, high-framerate 1080p in-game tests show the AMD Ryzen 3 3300X performing quite well. It's relatively high clocks and lower-latency single-CCX design seem to give it a welcome performance boost in these gaming workloads. The Ryzen 3 3100 also performs relatively well. In these games, it performs about on par with the Ryzen 7 2700X. 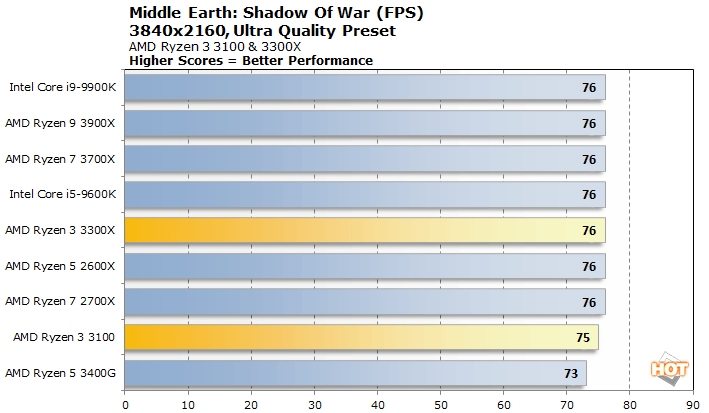 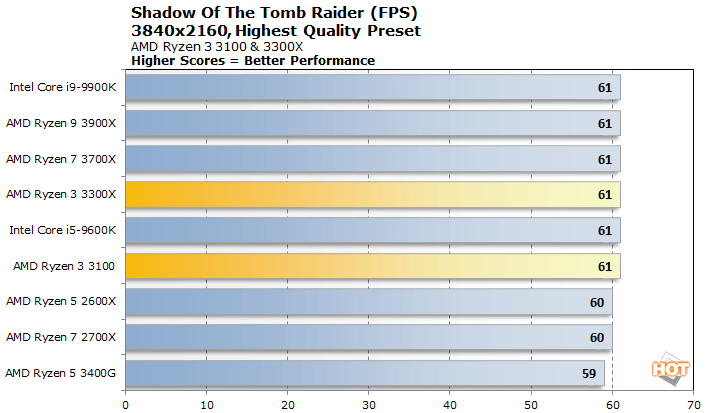 When you crank up the resolution and image quality, and shift the performance bottleneck onto the GPU, however, the playing field levels out completely and only two frames per second separates the first and last place finishers. 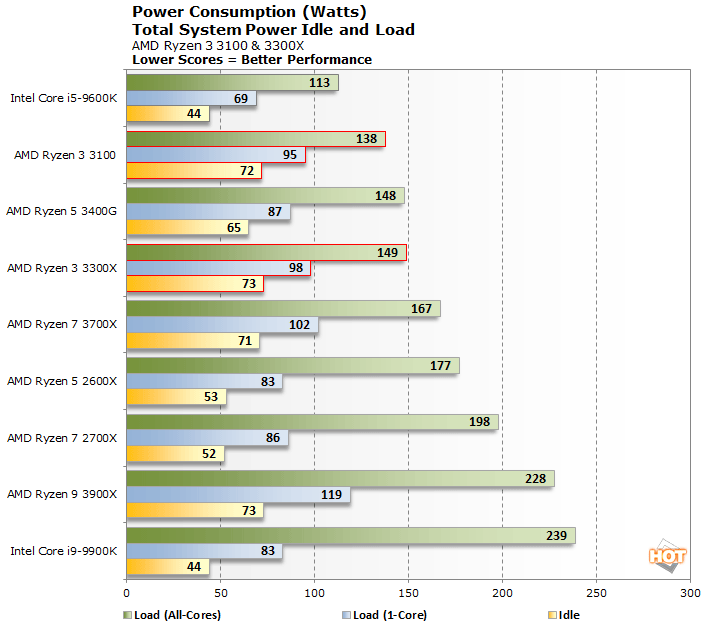 The Ryzen 3 3100 and Ryzen 3 3300X are both relatively power-friendly CPUs. As we've mentioned a few times in the past, the AMD Ryzen 3000 + X570 combo consumes considerably more power than Intel's and previous-gen platforms while idling, but when under a heavy workload these new processors put up some of the lowest power consumption numbers in the stack. AMD's Ryzen 3 3100 offers the best low power characteristics of all of the AMD-powered systems, followed by the 3400G, and then the 3300X.


What? No Overclocking Numbers?!

Unfortunately, we ran into some roadblocks when trying to overclock these processors. Although we had fully updated our test rig with the latest BIOS, drivers, Windows Updates, and Ryzen Master, none of the overclocking methods we tried had an impact on performance. Whether we used Ryzen Master or the BIOS, we were able to seemingly increase the all-core multiplier, to increase the all-core boost, but performance was unchanged. You may be thinking we pushed voltage too high or cooling was an issue and the system was throttling, but -- assuming Ryzen Master was reporting accurate number -- even with a 1.4c Vcore and 42.5x all-core multiplier, CPU temperatures never exceeded 75°C using the AMD Wraith Cooler. Needless to say, we'll have to do more digging. We fully expect these Ryzen 3 processors to hit similar max frequencies to other Zen 2-based processors, though.