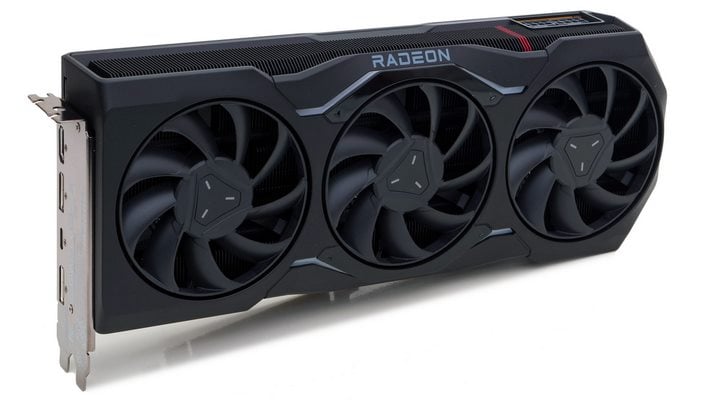 This has been a momentous year for GPUs and PC gaming in general. In the last few months, we’ve witnessed Intel’s entrance into the consumer gaming GPU market with Arc, NVIDIA introduced its powerful GeForce RTX 40 series based on the Ada Lovelace architecture, and AMD unveiled the world’s first consumer GPU that leverages chiplets, the RDNA 3-based Navi 31 – which we’ll be highlighting here. Both AMD and Intel also released new CPUs that boost single and multi-thread performance on platforms featuring the latest and greatest IO technologies. On top of all the bleeding-edge hardware to hit the scene, crypto mining has floundered and gamers and enthusiasts can finally score the latest GPUs, without having to jump through hoops or reward scalpers that command exorbitant prices. Some supply chain issues still persist, but 2023 is shaping up to be a good year for PC enthusiasts and gamers.

Regardless, today is all about AMD and the brand-new Radeon RX 7900 series. The company announced the Radeon RX 7900 XT and Radeon RX 7900 XTX a few weeks back to much fanfare. The new RDNA 3-based Navi 32 GPU powering these cards employs a chiplet design approach to break the compute elements away from the memory controllers and last level cache, which is an industry first for a consumer GPU. AMD has also incorporated the latest display output technologies and beefed up the media engine and compute units to boost performance across a variety of workloads.

AMD targeted GeForce RTX 4080 class performance this go-round and the company’s disclosures during the unveiling indicated they’ve hit that target. But it’s time we find out for ourselves. First up, a quick look at the cards and some specs, and then we’ll dig into an array of benchmarks and performance data. Grab a snack and get comfy, because there’s lots to cover on the pages ahead... 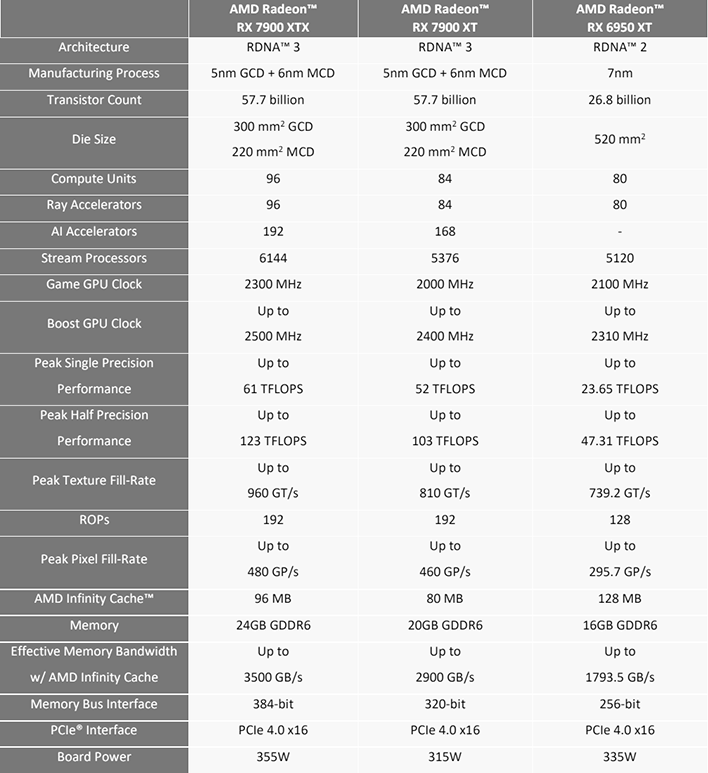 Find Radeon RX 7900 Series Cards @ Amazon
Before we dig in, there are a handful of articles we’d like to mention. We have already covered AMD’s launch event, explained the finer details of the RDNA 3 graphics architecture, and gone hand’s on with the cards on video. We’ll summarize some of the nitty-gritty again here, but strongly suggest checking out our previous coverage for the full scoop regarding the Radeon RX 7900 series.
Those three articles will lay all of the foundation necessary to digest everything we'll be showing you here today. 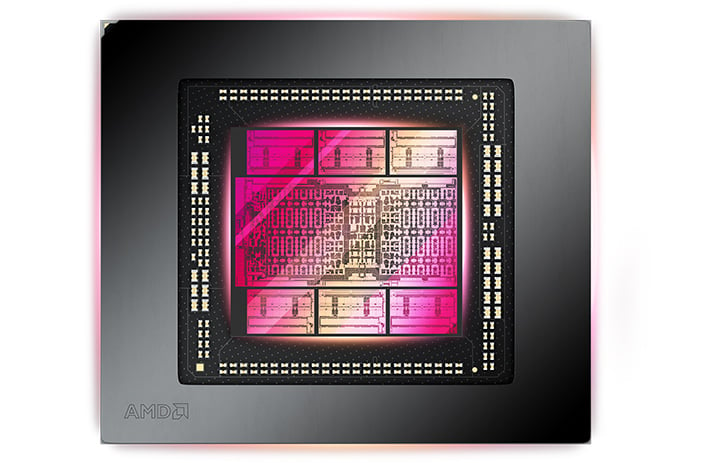 As we mentioned, Navi 31 is the first consumer GPU to leverage chiplet technology. The chiplet setup consists of a single Graphics Compute Die (GCD), which is manufactured at 5nm, and six Memory Cache Dies (MCD), which are manufactured at 6nm. The flagship Radeon RX 7900 XTX uses the full complement of 6 MCDs, which equates to 384-bit memory interface (64-bit per die) in aggregate, with GDDR6 memory offering 20Gbps of throughput. The Radeon RX 7900 XT uses 5 MCDs, which results in a 320-bit memory interface. Note, however, that the Radeon RX 7900 XT will still have 6 MCDs present, but one is a dummy die that is functionally disabled.

RDNA 3's Infinity Cache has been revamped as well. Peak bandwidth has been increased by 2.7x over RDNA 2, to a peak aggregate bandwidth of 5.3 TB/s. AMD says it has optimized its caching algorithms to maximize hit-rates as well, to account for the decreased amount of Infinity Cache in RDNA 3 (96MB vs 128 MB). AMD claims that its algorithm optimization, in conjunction with much larger L1 and L2 caches in the GPU, allow hit-rates to remain similar, while the smaller cache helps to reduce power consumption.

Overall, AMD claims RDNA 3 delivers 54% better performance per watt than RDNA 2, which itself provided a 54% improvement over the original RDNA architecture. This focus on efficiency plays into decisions like choosing GDDR6 memory over the higher-bandwidth GDDR6X RAM that NVIDIA uses on some of its top end GeForce cards.

There are a number of other upgrades throughout the GPU as well. AMD has implemented dual-issue SIMD units, which effectively doubles instructions per clock. AMD has also decoupled its front end and shader clock rates. The front end is clocked at 2.5 GHz while the shaders ride along at 2.3 GHz. AMD claims the lower shader clocks allow for 25% power savings, while the higher clocked front end helps increase and optimize GPU utilization, further increasing efficiency.

RDNA 3’s peak compute performance in the GPU’s full configuration is 61 TFLOPS, which is nearly a 3x increase over RDNA 2. This is accounting for the Radeon RX 7900 XTX’s full complement of 96 compute units; the Radeon RX 7900 XT is cut down by one-sixth to 84 compute units. That might not sound like a big upgrade over Navi 21's 80 compute units, but keep in mind RDNA 3's CUs are twice as wide, which results in 128 shaders each. Navi 31 also features additional ROPs to boost pixel fill rates and much higher actual and effective memory bandwidth over the previous-gen.

The RDNA 3 architecture also includes two dedicated AI accelerators per compute unit. AMD has not yet elaborated on the specific AI instructions added or other improvements, but it has noted that these are intended for gaming functions, rather than general purpose AI workloads. We suspect they’ll come into play when FSR 3 with frame generation arrives sometime next year.

Although the number of Ray Tracing units per CU hasn’t increased, ray tracing is expected to be about 50% faster than RDNA 2 due to architectural updates and higher-frequencies. AMD has incorporated new ray box sorting and traversal methods into the design, which should improve performance with many ray tracing workloads, but as you’ll see a little later isn’t quite enough to catch NVIDIA’s 3rd Gen RT cores. 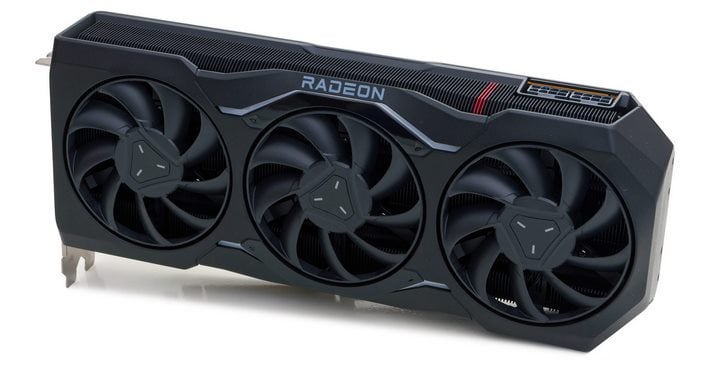 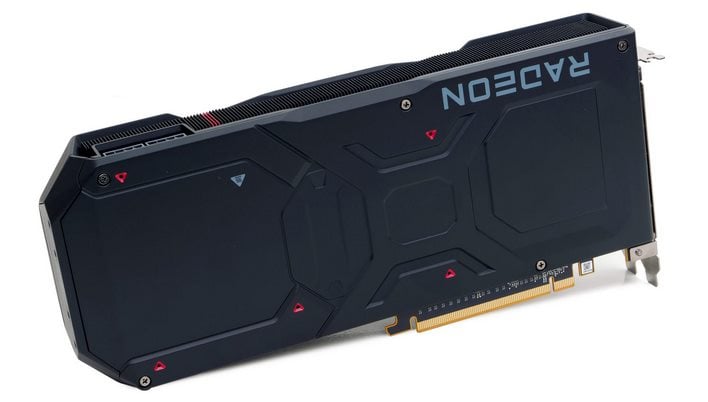 
The mostly-black designs, with angular fan shrouds looks great in our opinion. And the out-of-box experience is definitely better than any previous-gen Radeon. From the top and bottom, the large fin-stacks that span the entire length of the cards is visible. The fin stacks are also black save for three fins that are painted Radeon Red to add a bit visual appeal.

Above the fin stacks, both cards feature triple axial fans. In practice the coolers on both cards perform quite well. The fans will spin down during idle times, which makes the cards effectively silent. Under load, the fans will obviously spin up, but when inside a chassis alongside other fans, they aren’t particularly audible. There’s definitely a noticeable report, but noise output is in-line with other high-end GPUs and won’t be a concern for most users. 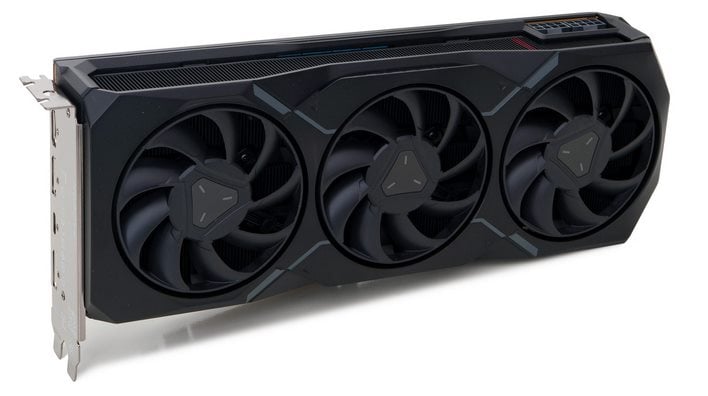 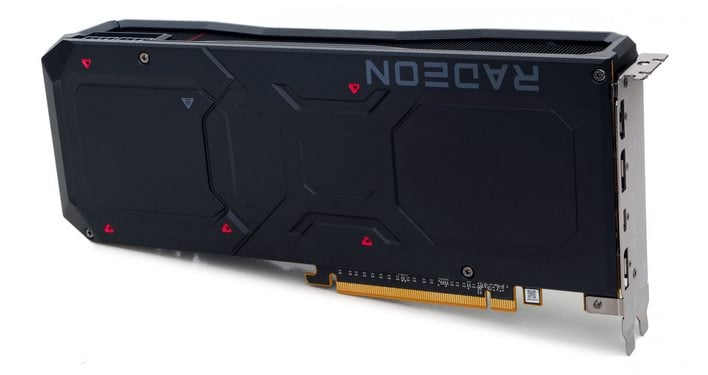 Though different sizes as well, the full coverage backplates on the cards are quite similar too. The backplates are metal and feature large Radeon logos with red triangular accents, with tiny holes at their center.


The Radeon RX 7900 XT and XTX both have a pair of 8-pin power connectors, which when combined with the PCIe slot itself, offer up to 375 watts of power to the boards – 150 watts per PCIe connector and 75 watts from the slot.

AMD has upped the board power on the 7900 XT to 315 watts. During its initial preso, the card was specc’ed for 300 watts. And the Radeon RX 7900 XTX has a board power of 355 watts. 60 watts is plenty of headroom for the XT to provide some flexibility when tweaking and overclocking, but increasing the power target on the XTX could theoretically configure it for higher power than the slots and power feeds can supply. As you’ll see later, we had no trouble overclocking out board quite a bit, but we suspect board partners may incorporate additional feeds to provide some added power headroom. 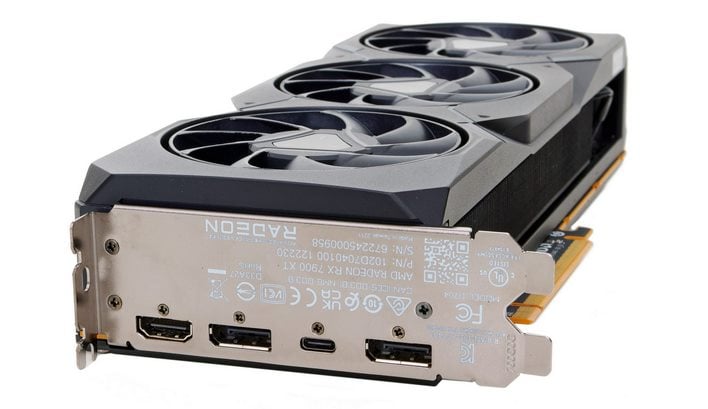 The display outputs on AMD’s Radeon RX 7900 series cards are similar and consist of dual full-sized DisplayPorts (DP 2.1), a full sized HDMI port (2.1a) and a USB-C (DP 2.1) port. Support for DP 2.1 means the cards are capable of supporting 4K resolutions at up to 480Hz and 8K resolutions up to 165Hz. While the maximum DP data rate tops out at 54Gbps, which doesn’t comply with the standard’s maximum 77.3Gbps, it’s still plenty fast to support next-gen displays due to arrive over the next few years. This is one area where AMD has a clean advantage over NVIDIA’s RTX 40 series GPUs, which only support DP 1.4a and top out at 4K 240Hz and 8K 60Hz. 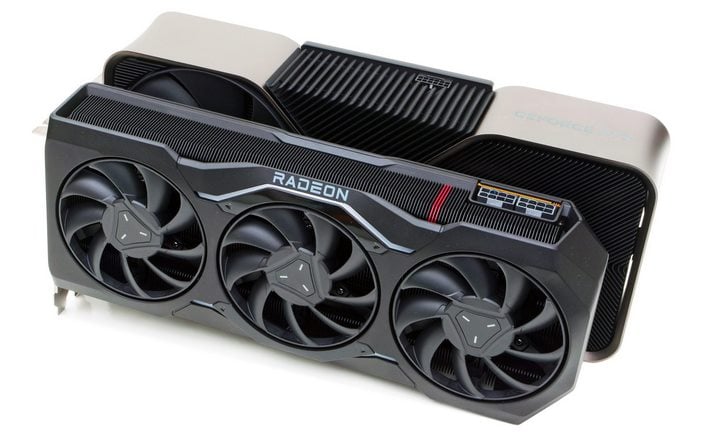 And with that, let's check out some numbers...
NEXT PAGE