AMD’s hot new Radeon RX 7900-series graphics cards are due to launch very soon and we are fortunate to have both the RX 7900 XT and RX 7900 XTX in our lab for testing. While we can’t share any performance results or show them in-action just yet, we are able to unbox these cards with you to show off the retail experience and physical designs. So, let’s open them up and check them out together.


Both cards arrive in similar boxes with very nice-looking graphics of the card on the front. 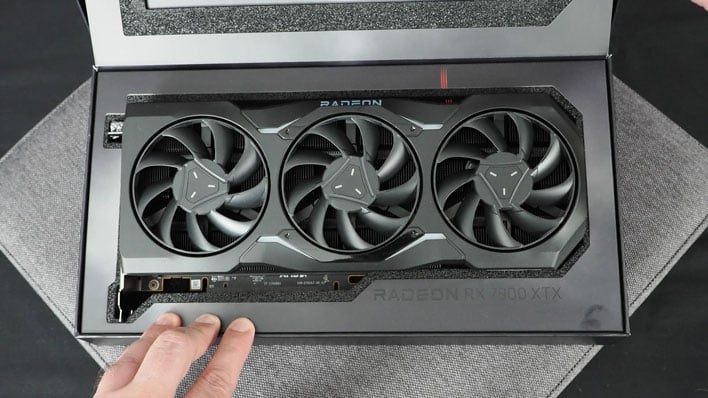 When the lid of the boxes is raised, internal mechanisms prop up and present the card front and center. Foam inserts keep the card secure while staying mostly obscured to keep a nice presentation. 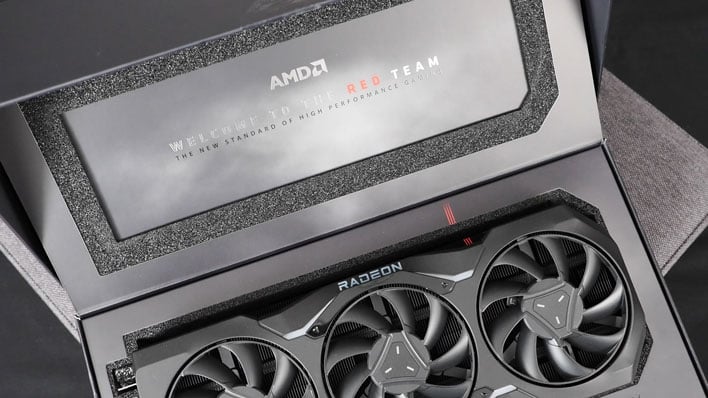 The underside of the lid reads “AMD: Welcome to the Red Team. The new standard of high performance gaming.” Elsewhere the red three stripe motif extends from the card to the packaging and the card model is displayed in subtle text.

The RX 7900 XTX and RX 7900 XT look very similar at first glance. The two cards share many design cues, but are actually quite different. They are both based on the same RDNA 3 architecture and technically share the same GPU, but only the XTX is fully enabled. 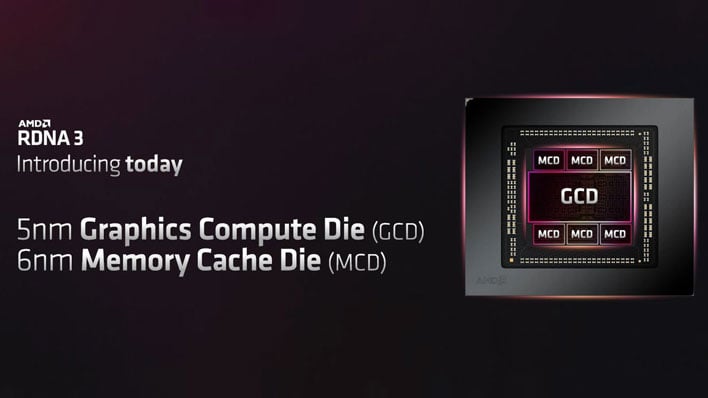 As a recap from our RDNA 3 architecture deep-dive, these GPUs are actually a collection of chips consisting of a central Graphics Compute Die (GCD) flanked by multiple Memory Cache Dice (MCD), making them the first chiplet graphics cards. The GCD is built using cutting-edge 5nm lithography which benefits the logic circuits while the MCDs use more mature 6nm process tech as the memory and cache functions benefit less from additional die shrinks. 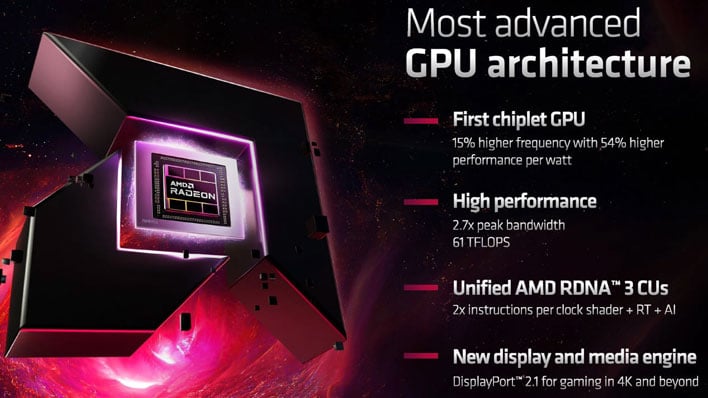 AMD claims their “most advanced GPU architecture” affords 15% higher frequencies with 54% better performance per watt. The company cites a 2.7x increase in peak bandwidth and up to 61 TFLOPS of compute performance, which falls in line between the GeForce RTX 4090 and RTX 4080 from NVIDIA.

The new RDNA 3 compute units (CUs) offer double the instructions per clock with updated RT and AI performance. Unlike Team Green which still clings to DisplayPort 1.4, these cards can support DisplayPort 2.1 out of the box. This may not be too relevant yet, but it will become increasingly important as higher-resolution and refresh-rate displays arrive on the market. 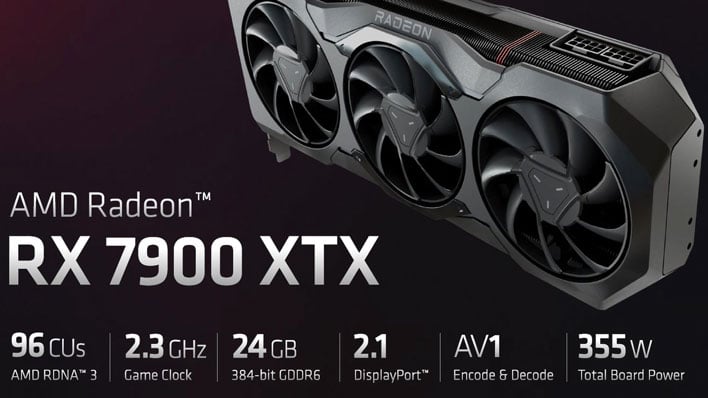 The Radeon RX 7900 XTX is the flagship configuration, equipped with a full set of 96 unified RDNA 3 CUs and 24 GB of GDDR6 with a 384-bit bus. The XTX has all six MCDs fully enabled to achieve this. AMD is still a little cagey about clock frequencies but does indicate that average game clocks will be around 2.3 GHz. The total board power is rated for 355W via dual 8-pin connectors—no 12VHPWR here. 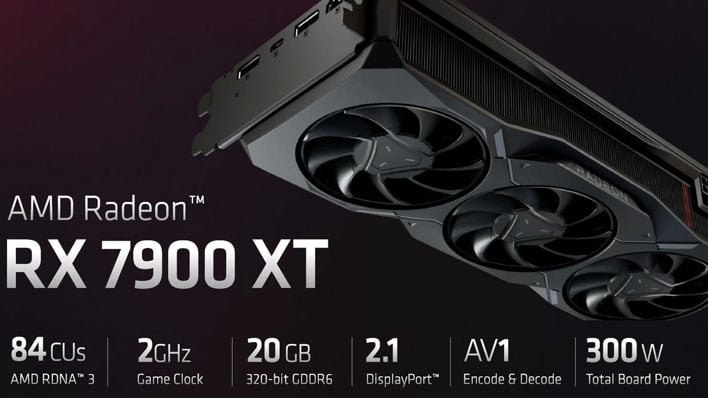 The RX 7900 XT sits one rung down the ladder. It offers 84 CUs with 20 GB of GDDR6 over a 320-bit bus. The physical components are reduced by one-sixth as the XT model uses just five MCDs with the corresponding portion of the GCD also turned off. A sixth MCD is physically present for packaging reasons but is functionally disabled. 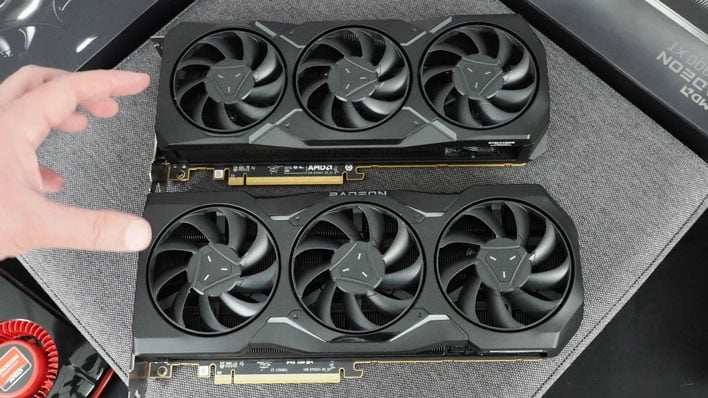 Physically speaking, the cards share similarly angular fan shrouds, though not identical. Both cards include unique RGB lighting, though we cannot show you here just yet. 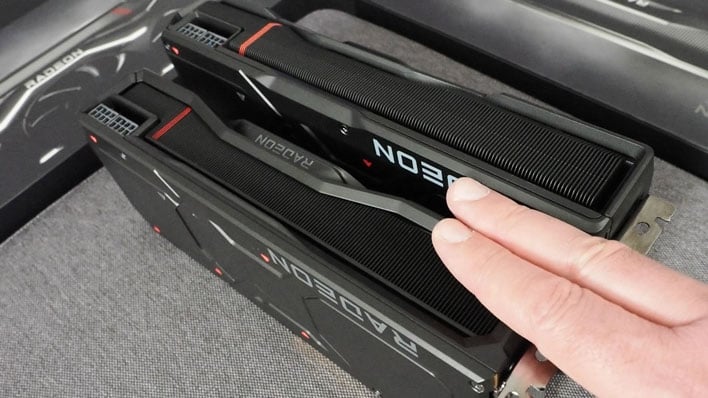 The XTX is slightly larger than its XT compliment in all dimensions. 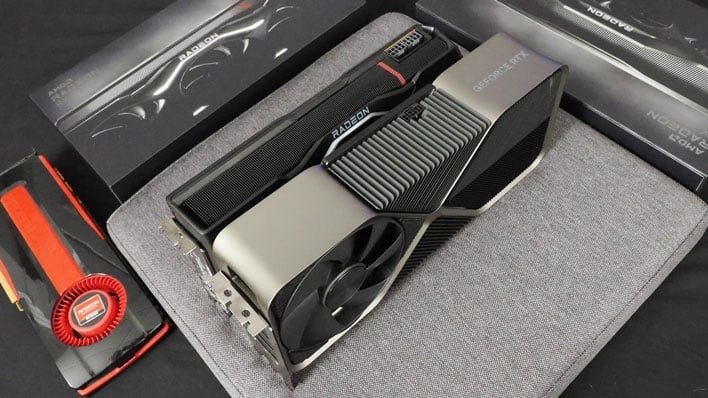 That said, the GeForce RTX 4090 (and 4080 for that matter) absolutely dwarf the Radeon 7900-series cards. It is almost comical how much larger the Ada Lovelace GPUs are in the side-by-side. 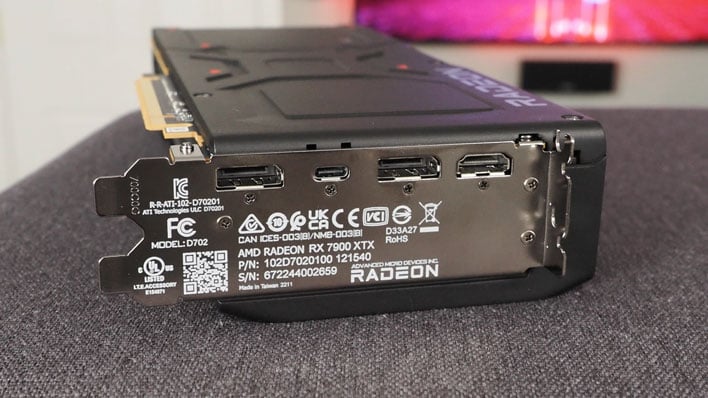 The I/O bracket is completely closed off apart from ports. This means warm air from the cards will need to vent elsewhere in the chassis, which may impact smaller SFF style rigs. The cards both feature an HDMI port, two full-size DisplayPorts, and a single Type-C port which can carry a DisplayPort signal. 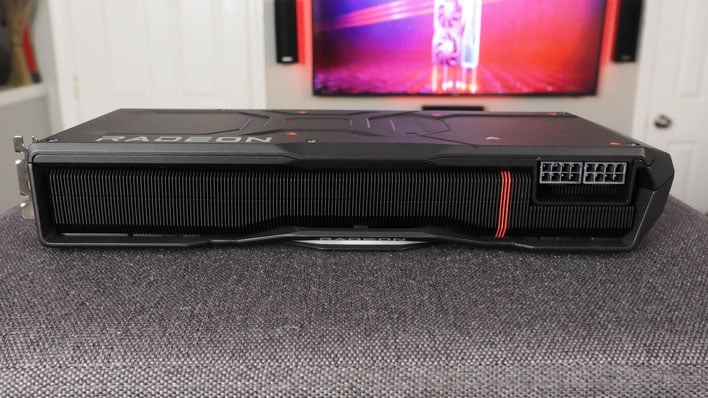 The side of the card shows off the anodized metal finstack. The fins are painted black except for three red fins which form a stripe. We can also clearly see the dual PCIe 8-pin power connectors, which are found in both reference designs. AIB cards will have the option to tack on more power connectors if deemed necessary for additional performance. 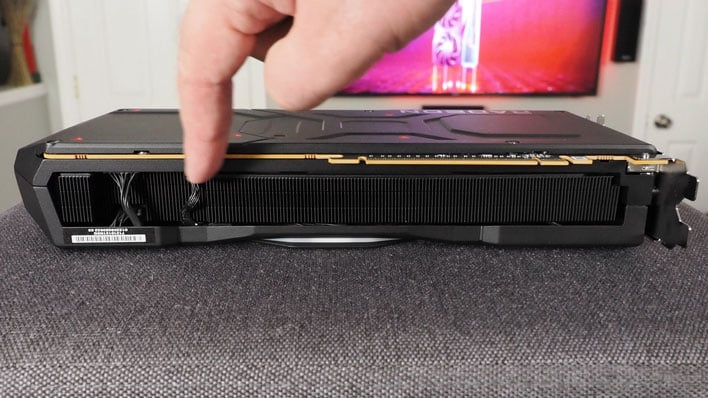 On the opposite side, the finstack is left completely black. There is a small cutout a couple inches wide which provides space for power connectors to run to the lighting and fans. 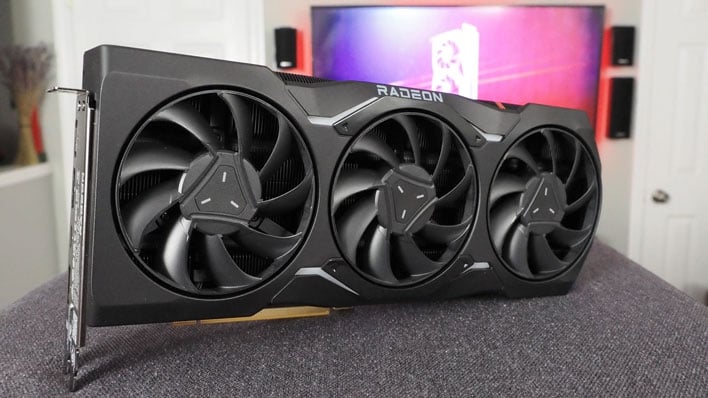 The face of the card gives us a good look at the triple radial fan setup. All three fans spin in the same orientation. Some other card designs switch up the direction of the central fan to coordinate airflow, but with how the finstack is arranged on these cards it should not make a difference. The backplate covers the full length of the card and is made of metal (not plastic). This helps the PCB remain rigid. It also provides some mass to help with thermal dissipation and cooling. 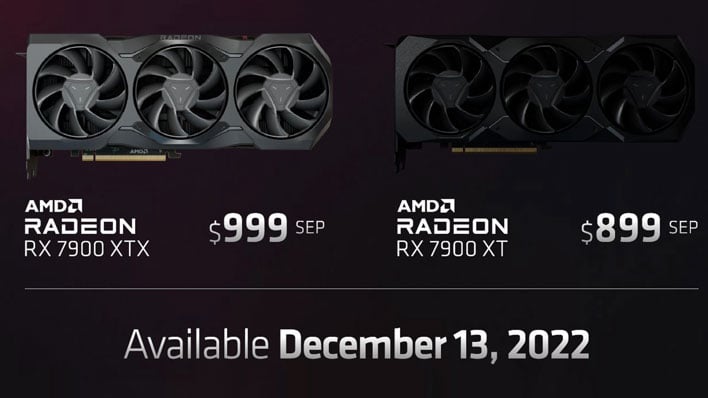 AMD is targeting GeForce RTX 4080-class performance with these GPUs, albeit at lower price points. These reference models will launch at $999 for the XTX and $899 for the XT, which is several hundred dollars cheaper than the RTX 4080 FE’s $1,199 MSRP. Availability will start on December 13th.