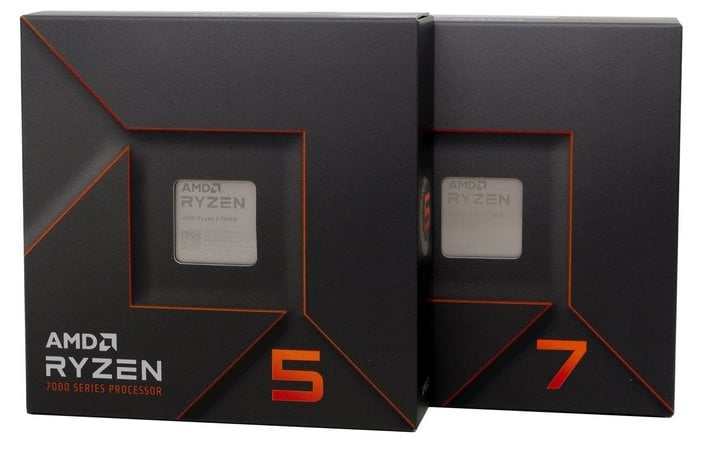 There are currently four chips in AMD's Zen 4-based Ryzen 7000 processor family, and we've already featured two of them. The Ryzen 9 7950X and Ryzen 9 7900X offered fantastic multi-threaded performance and stellar single-threaded speed, too. However, those chips both target the high-end of the market and are relatively power-thirsty. Not everyone needs twelve or sixteen CPU cores—particularly not gamers, whose applications rarely benefit from more than a half-dozen at most.

For PC gamers, as well as anyone looking for super-speedy CPUs without the need for high-end cooling or a fat pocketbook, AMD offers the Ryzen 5 7600X and Ryzen 7 7700X. These are the two CPUs we've got on the test bench today, and we're going to find out not only how they perform, but also how they stack up against Intel's latest processors.

Indeed, in the weeks since our previous review was published, Intel's struck back with its 13th-Gen Core family, formerly known as Raptor Lake. The new Intel CPUs are fast, sometimes efficient, and reasonably-priced, to boot. We're going to see how Intel's latest and greatest fare when faced with the best AMD has to offer. 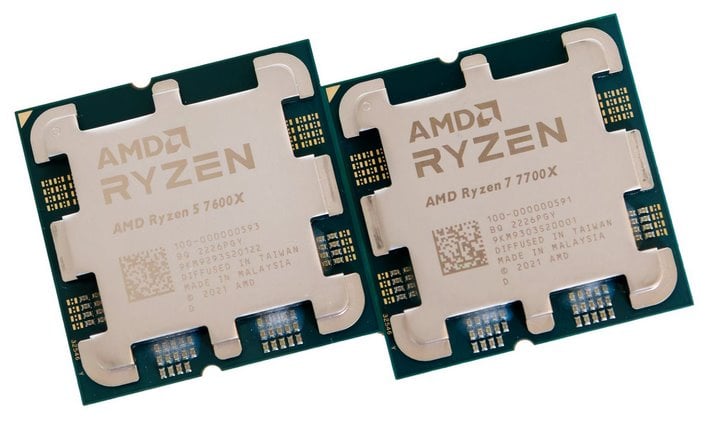 The Ryzen 7 7700X has no surprises for hardware enthusiasts familiar with AMD's branding. It's a mid-range processor with eight CPU cores clocked at up to 5.4GHz, or 5.5GHz with Precision Boost Overdrive enabled. The Ryzen 5 7600X drops two cores and 100MHz off of the boost clock, for six cores and a 5.3GHz max.

Both of these processors are rated for 105W TDP by AMD, and should be both considerably easier to cool, as well as significantly more apt to sip power, than their 170W-rated many-core siblings. This is largely down to the presence (and thus absence) of a single Core Complex Die (CCD) under each CPU's integrated heatspreader (IHS).

However, just like the last two generations of Zen processor architectures, Zen 4 sports 32MB of L3 cache per CCD, so this halves the available L3 cache from 64 MB on the Ryzen 9 processors down to 32 MB on these chips. Zen 4 does sport doubled L2 cache, though, giving it 1MB of L2 per CPU core versus 512K on previous generations. 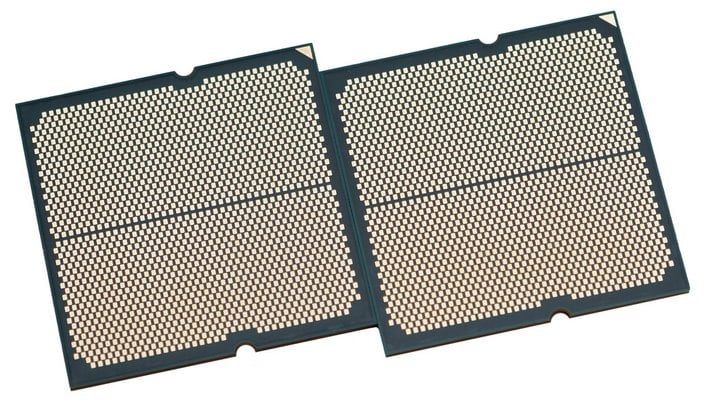 In case you've somehow missed all coverage of AMD's Zen 4 processors to this point and the picture above is shocking to you, we'll clarify that these CPUs are for AMD's new Socket AM5 platform. That's an LGA socket with the pins on the motherboard, just like Intel's been doing for sixteen years now. (AMD already did LGAs with Threadripper and EPYC, to be clear.)

Socket AM5 as a platform supports all kinds of new features, like PCIe 5.0 and DDR5 memory, as well as USB 4. The support for these features means that the mainboards and memory have become much more expensive, contributing to an overall rather high cost of entry for these processors. We'll talk more about that later, though.

If you're interested in more thorough and detailed information about the Zen 4 architecture and Socket AM5 platform, make sure to check our original coverage which goes into great detail on these topics.

When configuring our test systems for this article, we first made sure all firmwares were up to date, then we entered each system's respective BIOS / UEFI and set the board to its "Optimized" or "High performance" defaults. We then saved the settings, re-entered the BIOS and set the memory frequency to the maximum officially supported speed for the given platform (without overclocking). The SSDs were then formatted, and Windows 11 Pro was installed and fully updated.

When the Windows installation was complete, we installed all of the drivers necessary for our components, disabled Auto-Updating and Windows Defender, and installed all of our benchmarking software. When that process was done, we performed a disk clean-up, cleared any temp and prefetch data, processed idle tasks, and optimized all of the SSDs using Windows' built-in utility. Finally, we enabled Windows Focus Assist to minimize any potential interruptions and let the systems reach an idle state before invoking any tests.

We tested each system in its standard, manufacturer-recommended configuration. That means using DDR4 memory clocked at 3200 MT/s on the older CPUs, and DDR5 memory clocked at 4800 MT/s, 5200 MT/s, and 5600 MT/s on the Intel 12th-gen, AMD 7000, and Intel 13th-gen CPUs, respectively. We also didn't use "Multi-Core Enhancement," nor AMD's Precision Boost Overdrive feature.

Some users may balk at this decision, but using these features is technically overclocking, so we're testing the systems as spec'd by Intel and AMD themselves. If you buy a PC off the shelf, this is what you'll get. 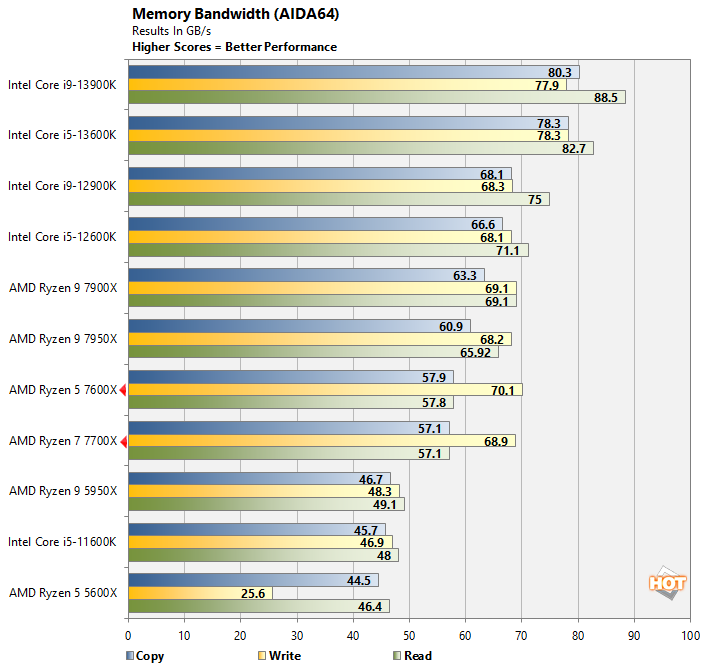 Compared to the Ryzen 9 processors, both of these further-down-the-product-stack models display reduced copy and read bandwidth. That's down to a combination of several factors, including their single-CCD nature (meaning, as we mentioned above, less L3 cache and fewer cores) as well as slightly reduced peak clock rates.

Some of what you're seeing here is down to the higher memory clock enjoyed by Intel's 13th-generation Core CPUs, but note that the latest Ryzens also fall behind the Intel 12th-gen parts in overall memory performance. Ultimately, Intel's CPUs just have slightly better memory throughput than AMD's. However, that doesn't matter as much as you might think, thanks to the next result. 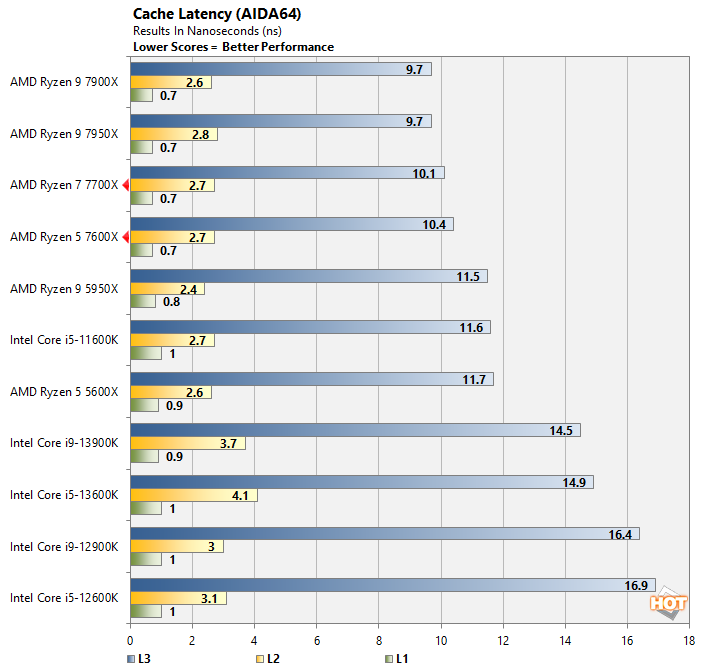 While AMD's processors may not excel in memory bandwidth, they make up for it in part with excellent access latency for all levels of CPU cache. Zen 2 and Zen 3 both had extremely short cache latencies, and Zen 4's stratospheric clock rates only improve on this quality. 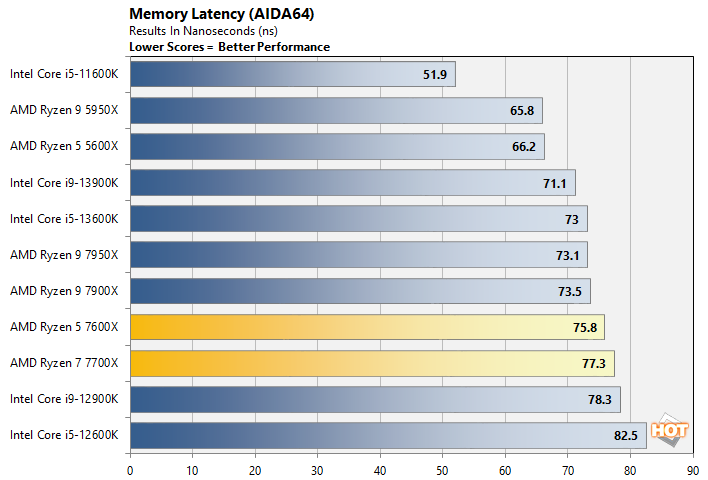 However, their "disaggregated" (read: chiplet-based) nature does give them some struggles with memory latency. These results are informed significantly by the 400 MT/s transfer rate advantage that Intel's Raptor Lake processors enjoy; if we were using overclocked memory on our Zen 4 processors, this chart would probably come out quite a bit differently. Of course, the DDR4-based systems come out as winners on this lower-is-better test—you'd need some seriously hot-clocked DDR5 to match up to their memory latency results.

In the GeekBench tests, we're stressing only the CPU cores in a system (not the graphics card/GPU), with both single and multi-threaded workloads. The tests are comprised of encryption processing, image compression, HTML5 parsing, physics calculations and other general purpose compute processing workloads. 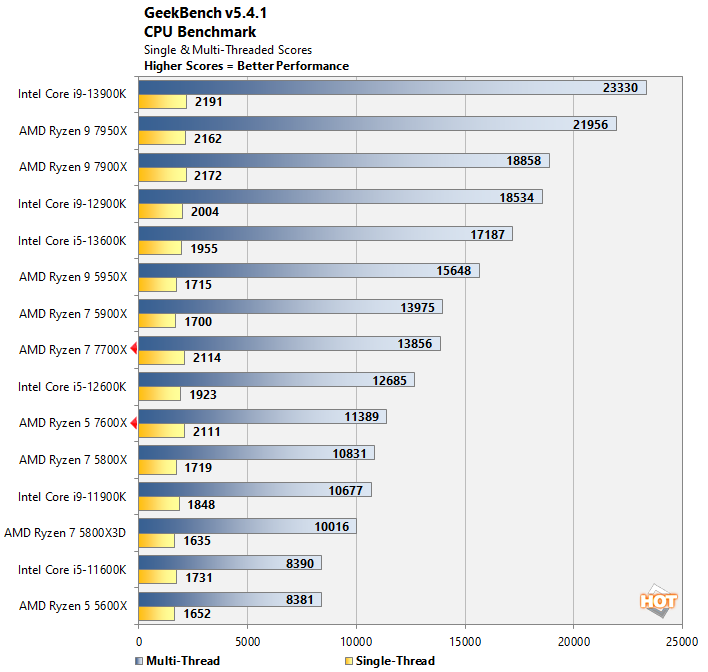 AMD's Zen 4 CPUs perform extremely well in Geekbench 5. They trivially hold their own against Intel's finest in the single-threaded tests, and are extremely competitive in multi-threaded workloads as well—at least, core for core. Even with a significant single-threaded advantage, the Ryzen 7 7700X can't make up the six-core deficit against the Core i5-13600K, and the six-core Ryzen 5 7600X fares even worse against its same-priced competitor. Still, both parts are matching or beating last-gen processors with more CPU cores, which is fantastic. 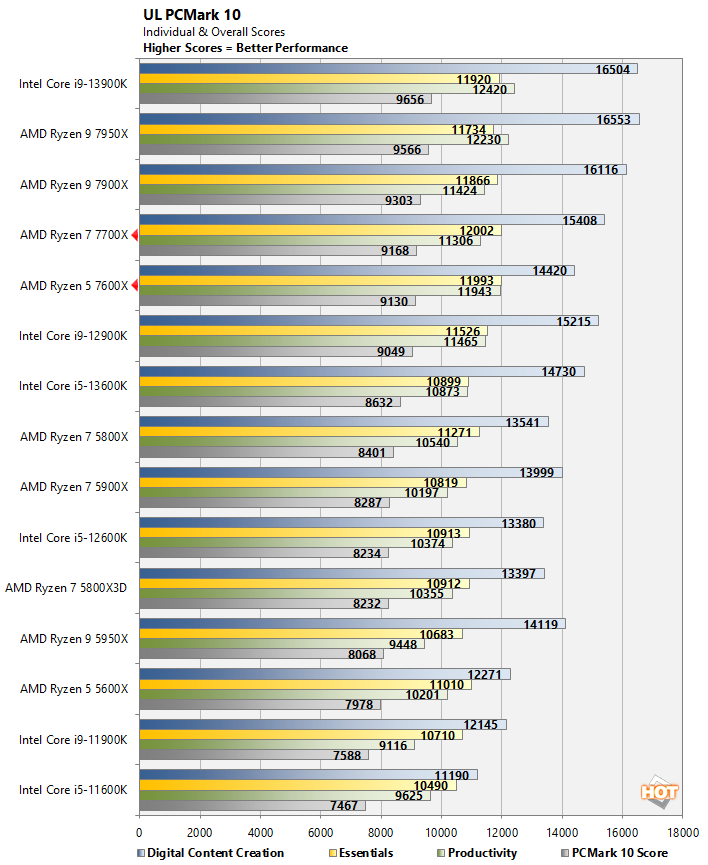 It may be confusing, but this benchmark is actually sorted by the overall PCMark 10 Score result. PCMark 10 results are varied, and the Digital Content Creation score in particular benefits from having a multitude of CPU cores. However, the test overall favors strong single-threaded performance, and so it goes that we see our midrange Zen 4 processors climb nearly to the top of the stack, bested only by the Core i9-13900K and their Zen 4 siblings. 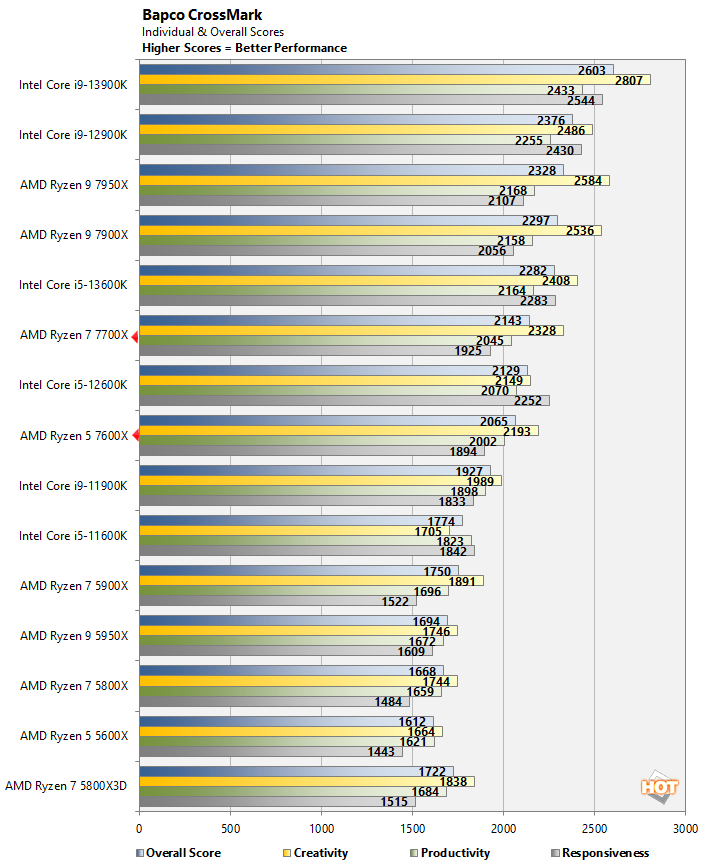 For whatever reason—possibly compiler optimizations—Bapco's Crossmark test heavily favors Intel's processors in its Responsiveness test. This drags down the overall scores of the Zen 4 processors, which perform very well in the multi-threaded Creativity test. Our two processors we're testing today put up respectable performances overall; check out the six-core Ryzen 5 7600X handily outpacing the eight-core Core i9-11900K—to say nothing of how it beats every single Zen 3 processor.

These benchmarks measure performance of an array of browser-based technologies used on modern, rich web applications. Scores in these benchmark are an indicator of the performance users would see when browsing the web and running advanced web apps. All of the systems were tested using the latest version of Microsoft's Edge browser, with default browser settings, on a clean, fully-updated install of Windows 11. 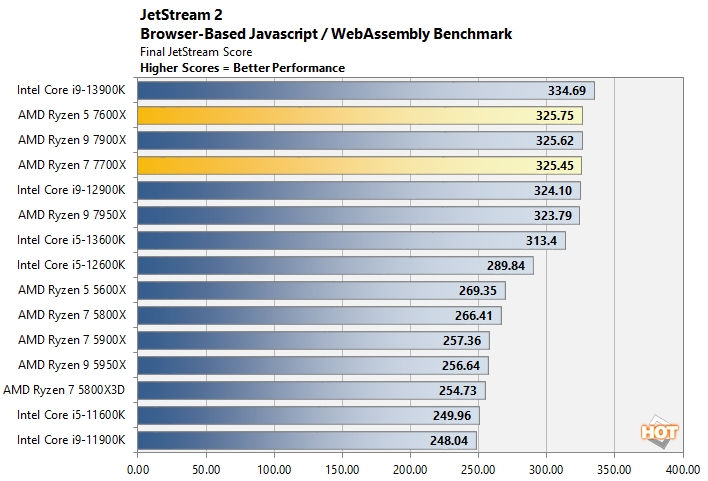 Jetstream heavily favors processors with the fastest single-threaded performance and the lowest overall latency. Unsurprisingly, that puts all of our Zen 4 processors within margin-of-error for this benchmark, and ahead of every Intel chip save for the expensive Core i9-13900K. If you need a machine for heavily web-based office work, look no further than the Ryzen 5 7600X. 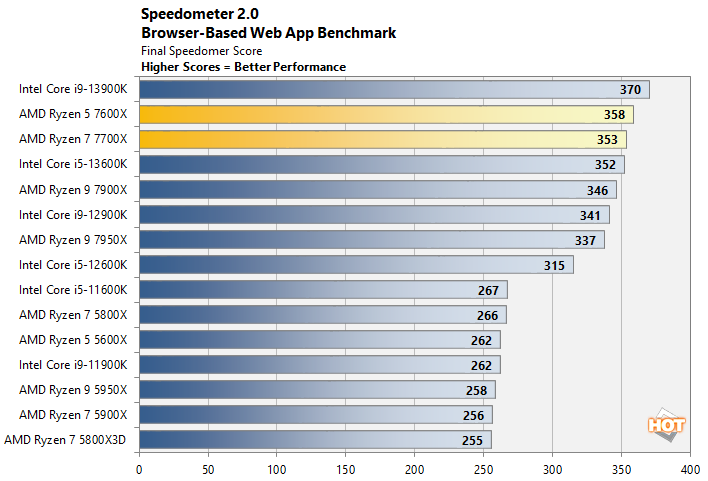 Browserbench Speedometer is a very similar test to Jetstream, and it tells the same story. It's difficult for browser-based applications to make use of multiple threads, so peak single-threaded speed wins the day here, at least in theory. Our Ryzen 5 7600X actually has the lowest single-core clock rate of any of our Zen 4 CPUs, but there's a significant amount of run-to-run variance here, so we wouldn't put too much emphasis on the specific order of results in the top seven or so processors. 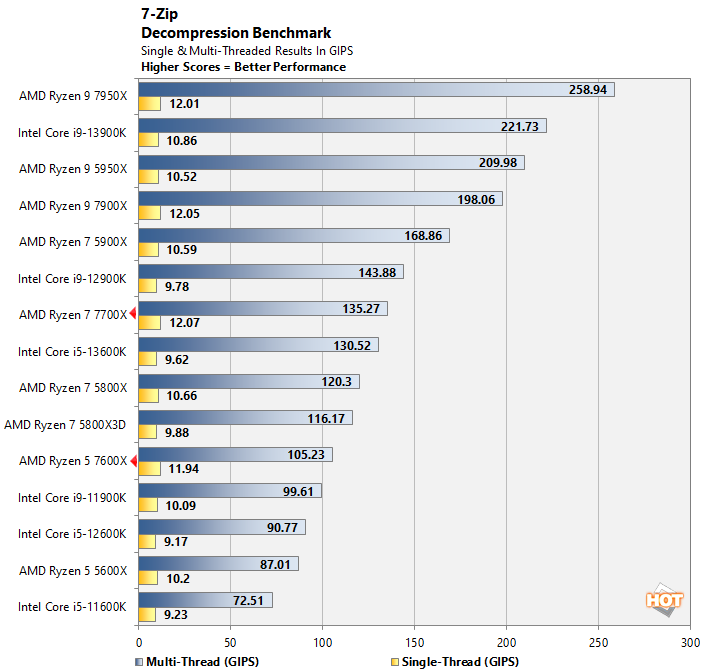 We saw extremely insane 7-Zip performance in our original Zen 4 review, and the new CPUs do not disappoint on that front. Of course, in this parallel benchmark, more cores is generally better, but check out the Ryzen 5 7600X's six cores smashing past eight- and ten-core processors, while the Ryzen 7 7700X beats out the 14-core i5-13600K. Zen 4 is very good at file decompression.