Kioxia may not be a household name just yet, but there's a decent chance that your laptop has a Kioxia solid-state drive within. In fact, the Toshiba subsidiary's SSDs can be found in desktops, workstations, and even servers racked up in a datacenter as boot drives. That's exactly the target market for the company's latest high-performance SSD, the XG8, which Kioxia unveiled earlier this year.

The XG8 is focused on OEM channels, as opposed to being sold directly to consumers at retail, but that doesn't mean that it's hiding some hideous performance deficiency behind its integrator-only status. As you'll see below, the XG8 is a rather competitive drive that can keep up with other current midrange-focused PCIe 4.0 drives, but let's not get too far ahead of ourselves. First let's meet the Kioxia XG8... 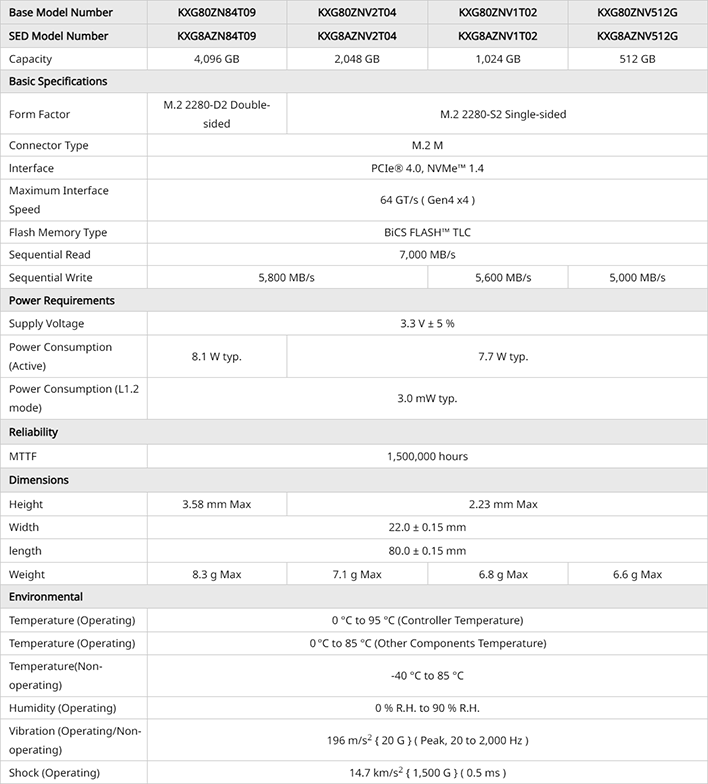 Find Kioxia SSDs @ Amazon
We're testing a 2 TB version of the XG8, which comes in the usual M.2 2280 form factor. It's offered in sizes from 512 GB all the way up to 4 TB, the latter requiring that flash memory occupies both sides of the drive. This NVMe SSD has all of its 5th-generation BiCS 3D NAND on one side, so no heat should be sandwiched between the motherboard and SSD. The controller supports PCI Express 4.0 with four lanes of connectivity, which has been the standard for enthusiast SSDs for quite a while now.

Kioxia compares the XG8 to the much older PCIe 3.1 XG6, which we reviewed as a retail drive from parent company Toshiba, but this isn't the company's first foray into PCIe 4.0 drives. For example, the XG7 can be found in Lenovo's ThinkPad P15, and it was a speedy drive as well. As far as the XG8 goes, Kioxia rates it for a blistering 7 GB per second in throughput for reads and 5.8 GB/sec in writes and would easily eclipse what the XG7 did as part of the ThinkPad. Regardless of comparison points, the XG8 promises to be a big upgrade.

Kioxia says the XG8 should be good for upwards of 900k I/O operations per second for random reads and 600k IOPS for writes. Benchmarks that rely on the file system rarely ever see those stratospheric ratings, but the hardware for low-latency reads and writes seems to be present, at least.

The XG8 is outfitted with Toshiba's latest 5th-generation BiCS flash memory, which has 112 layers of 3-bit-per-cell (TLC) memory. This should allow for higher capacities and lower latencies than the previous generation

The back of the XG8, like several other drives including Samsung's SSD 990 Pro, has nothing but a thermal coating and some traces. Since the 4 TB version of the XG8 has NAND on both sides, heat that could otherwise have nowhere to go should be somewhat more manageable under pressure. Combined with NVMe's host-controlled thermal management, we expect that the drive will perform as well as possible for as long as physics allow under sustained workloads. 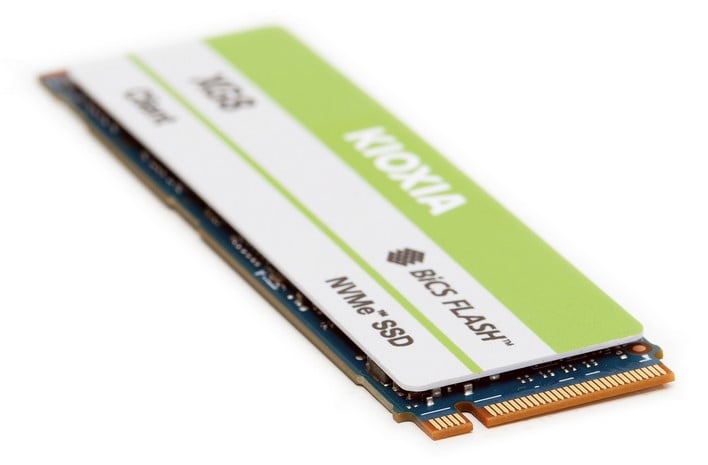 Now that we've had a tour of the Kioxia XG8, let's take a look at how it performs in an array of tests. 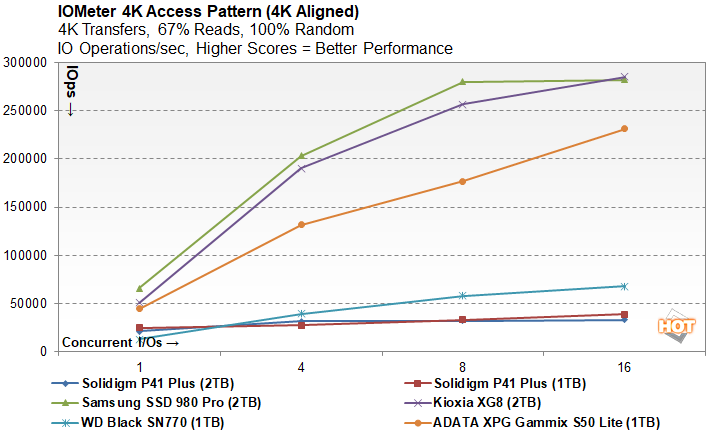 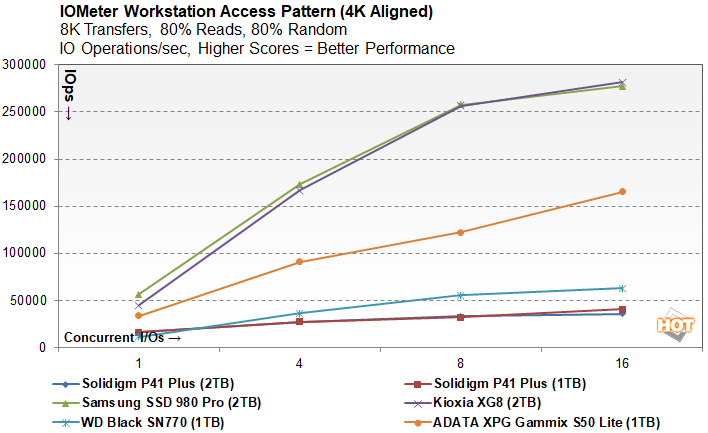 The Kioxia drive's random I/O performance is very good, running nearly neck and neck with the Samsung SSD 980 Pro and far ahead of every other drive once we get into more concurrent operations. Scaling is almost perfectly 1:1 when moving from one to four operations at a time, with more to gain at eight and 16. These workloads are vastly different, and the second test which reduces randomness from 100% to 80% (meaning, more sequential operations) and increases the ratio of reads from 3:1 to 4:1, the XG8 could take a lead.

These numbers represent the average bandwidth for the drives we tested with both access patterns, across every queue depth. And once again, Kioxia's XG8 is off to a good start, staying in lockstep with Samsung. When a full third of the operations are writes, we see it's about 5% slower than Samsung, closing that gap to less than 2% with more reads and more sequential operations. When we're talking about single-digit differences, it's probably not something a user would ever notice. Meanwhile, the Kioxia enjoys a sizable lead over the third-place ADATA XPG Gammix S50 Lite. 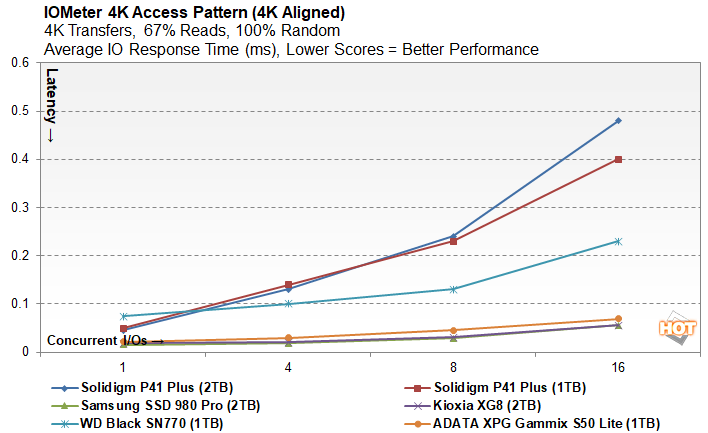 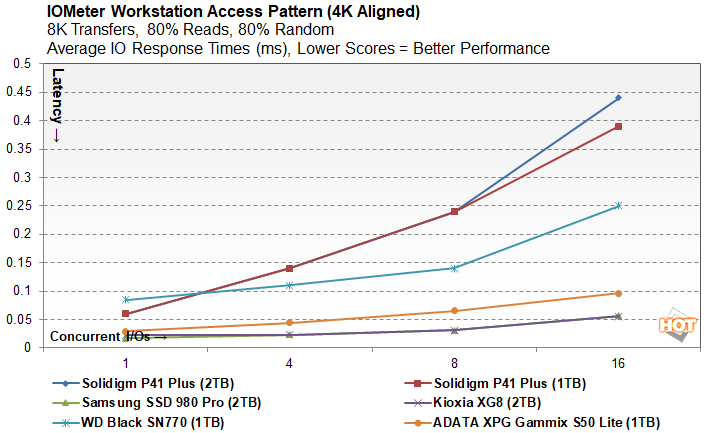 Our latency results mirror our I/O charts, which only makes sense. If the drive exhibits lower latency, it is completing operations faster. Just like the throughput tests, the Samsung and Kioxia drives run neck-and-neck for the entirety of both runs. 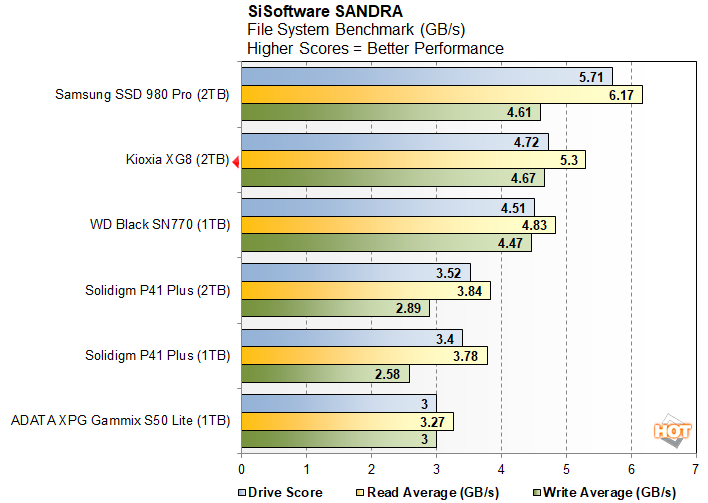 In SANDRA's file system benchmark, we take some of the abstraction away since the application doesn't have direct access to the hardware, and instead does its work through Windows to an NTFS volume, just like basically every client application. The bottom half of our chart has shuffled around quite a bit, but once again the XG8 comes in second to the Samsung SSD 980 Pro. A read average of 5.3 GB per second is still quite respectable, as is the greater than 4.7 GB per second in writes. This time, the WD Black SN770 gets the bronze medal, and it's quite a bit closer than the IOMeter results. In reality, none of these drives would feel slow, but Kioxia has a 50% advantage over the bottom of the pack while trailing the leader by just a smidge. 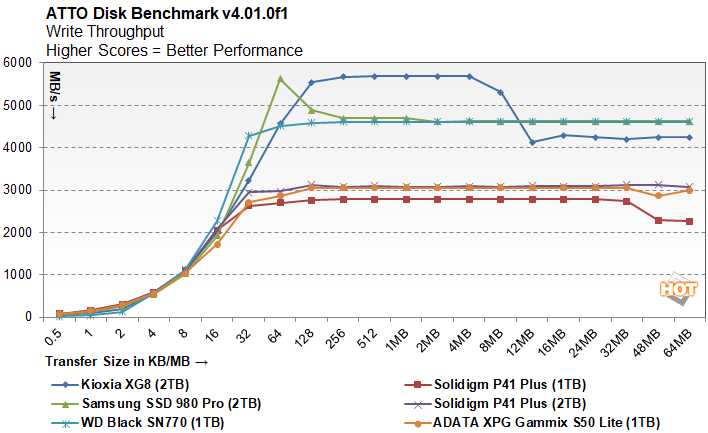 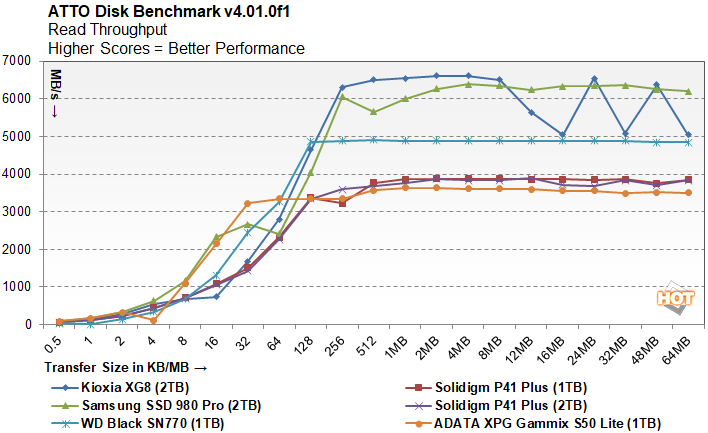 The XG8 had some really interesting behavior in ATTO's read and write throughput tests. It doesn't quite max out the speed as quickly as Samsung's SSD 980 Pro but it also drops off considerably once it hits the 12 MB mark. This probably means that the drive has exhausted its SLC write cache and we're seeing the true write performance of Kioxia's Gen 5 BiCS flash memory. Even if that's the case, it lasts a lot longer at higher write speeds than the 980 Pro, which peaks early and drops off quickly, and puts all other challengers in the rear view mirror quickly.

That does not, however, explain the odd behavior in the read test. We're not clear as to why it produced the saw-tooth pattern with the larger transfer sizes, but it's good to remember that we run these tests multiple times, so this isn't a fluke. Regardless, the valleys on display here are still faster than the sustained performance of the WD Black SN770, while the Solidigm P41 Plus drives and the ADATA XPG Gammix S50 Lite are all about 20% slower still. The XG8 acquits itself nicely, all things considered. 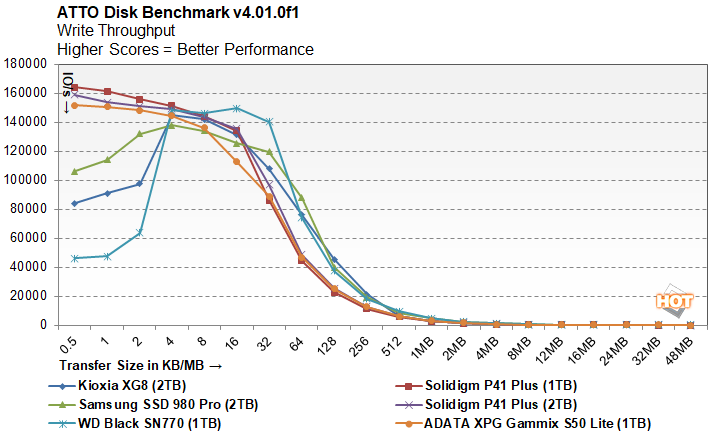 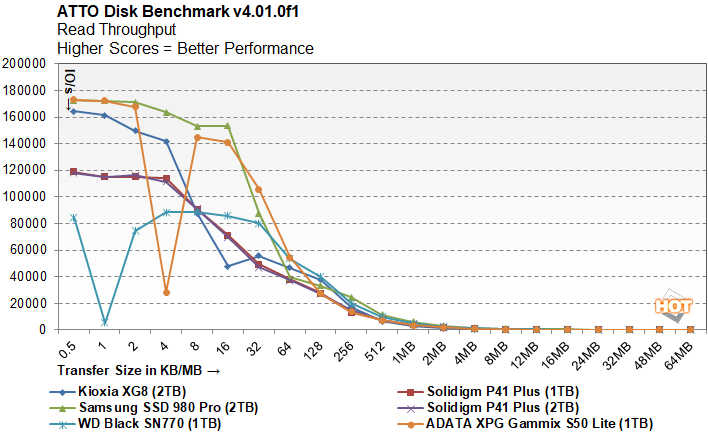 IO performance for writes starts off slowly, but jumps up to the rest of the pack quickly, and by the time we hit the file system's 4 KB block size, it's right in line with every other drive. The WD Black SN770 and Samsung 980 Pro both trail off more slowly, than the Kioxia, but the XG8 still beats out the rest of the pack all the way up to 64 MB block sizes. Writes are consistently good from the start early on but drop off at 8 and 16 KB, which is earlier than most of the other drives. Overall it's by no means slow, but definitely not exhibiting the consistent top-end I/O throughput we saw earlier. 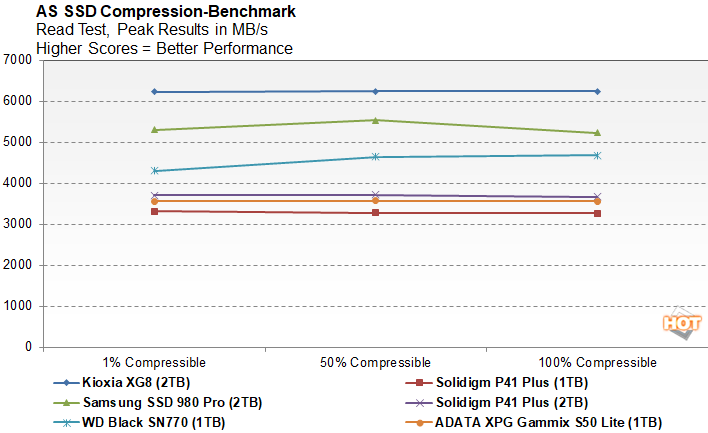 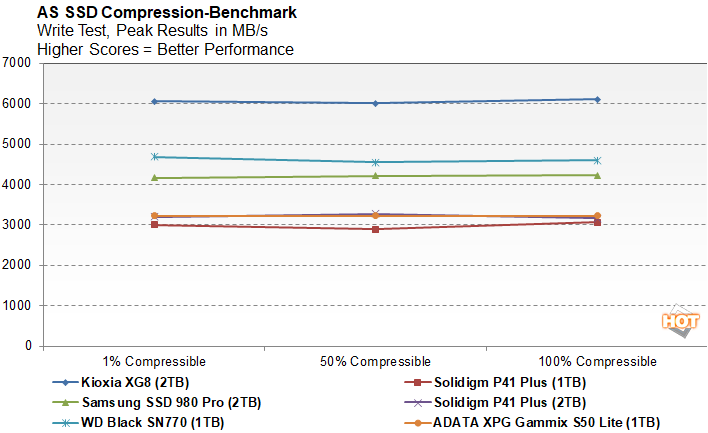 The compressibility of the data being transferred across the drives has almost no effect on performance for most of these drives, excepting the Samsung which drops off slightly. The Kioxia XG8 is very consistent in its write speeds regardless of compressibility. It also pulls out a sizable victory over the entire test group and stays right at or slightly above 6,000 MB/sec for the entire run.

On the next page we're going to continue our onslaught of tests moving from the synthetic to the real world, and then sum up our thoughts on this (so far) impressive OEM-focused drive.
NEXT PAGE