How We Configured Our Test Systems: We tested the graphics cards represented in this article on a pair of systems. One featured an ASUS Prime X299 Deluxe motherboard powered by a Core i9-10980XE 18-core / 36-thread processor and 32GB of HyperX DDR4 RAM clocked at 2,933MHz. The other was built-around an MSI X570 Godlike motherboard, equipped with a Ryzen 9 5950X and 16GB of G.SKILL DDR4 RAM clocked at 3,200MHz. The first thing we did when configuring the test system was enter the UEFI and set all values to their "high performance" defaults, then we disabled any integrated peripherals that wouldn't be put to use. The memory's clock was dialed in to its optimal performance settings using its XMP profile and the solid state drive was then formatted and Windows 10 Professional x64 was installed and fully updated. When the Windows installation was complete, we installed all of the drivers, games, applications and benchmark tools necessary to complete our tests. 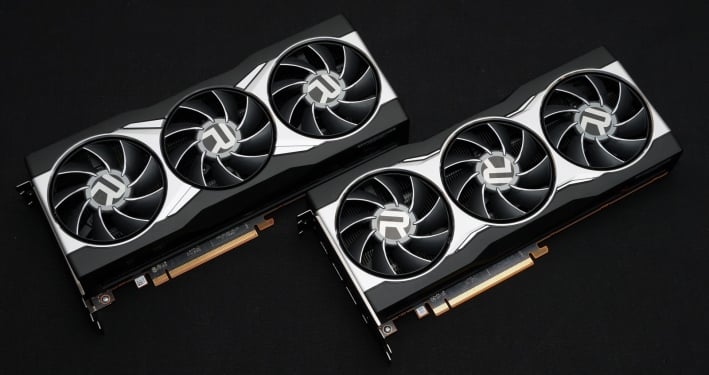 For all of the standard tests, the Radeon RX 6000 series cards were tested using their "Balanced" performance profile. "Rage" mode was enabled for a sampling of tests present in the overclocking section of this article, however. The new Radeons were also tested with and without Smart Access Memory enabled in an attempt to paint the most complete picture of performance. 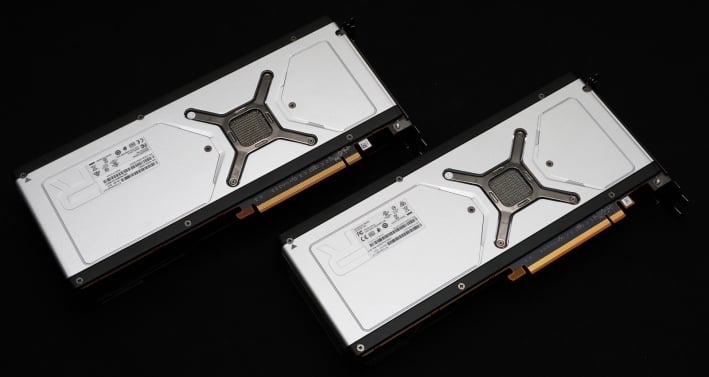 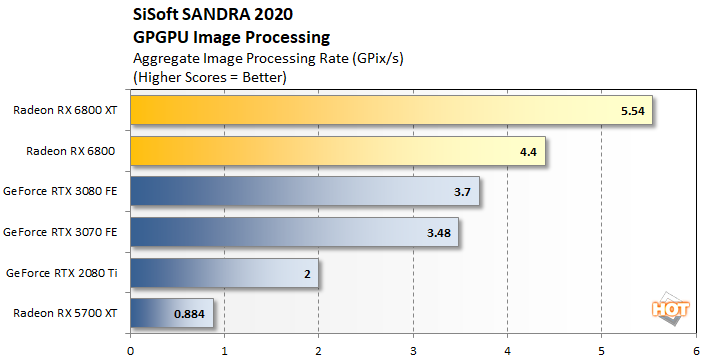 The new Radeon RX 6800 and RX 6800 XT put up some monster numbers in SANDRA's image processing benchmark, besting NVIDIA's GeForce RTX 3080 by a wide margin, to finish at the top of the charts. 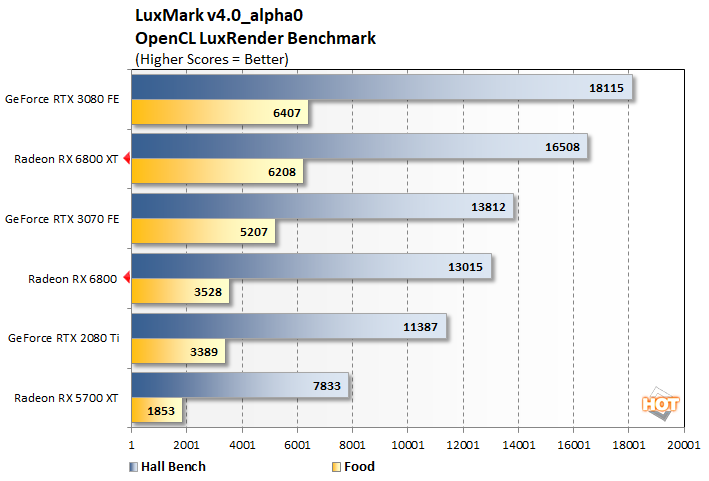 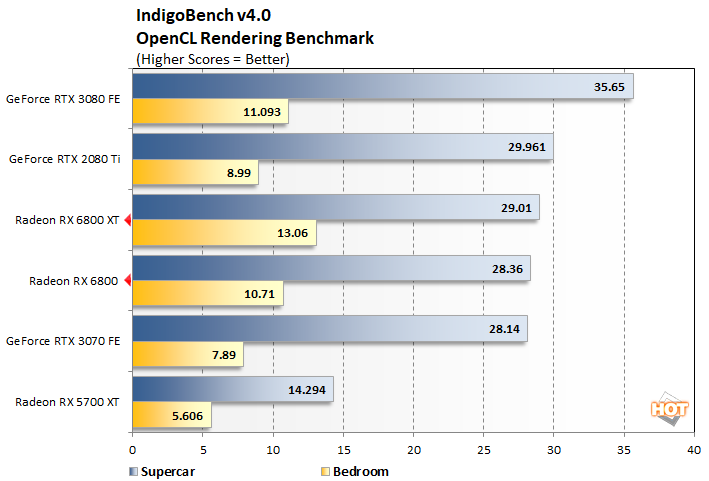 The Radeon RX 6800 and RX 6800 XT finish right in the middle of the pack here, according to the results with the "Supercar" model at least. With the more taxing "Bedroom" model, the Radeon RX 6800 XT scores a first place finish, with the RX 6800 trailing only the GeForce RTX 3080. 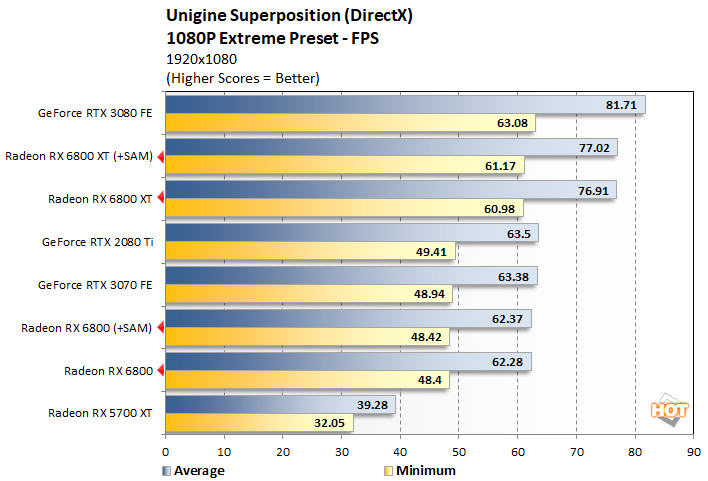 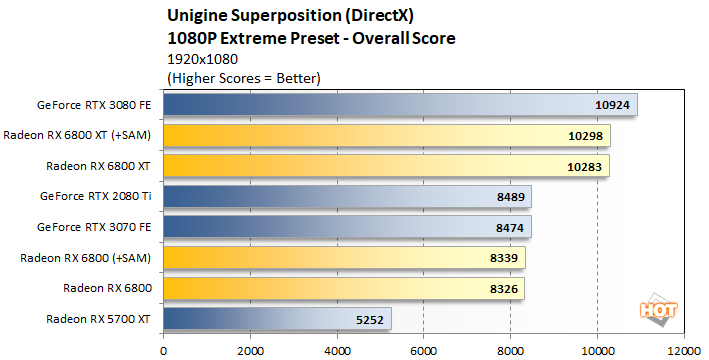 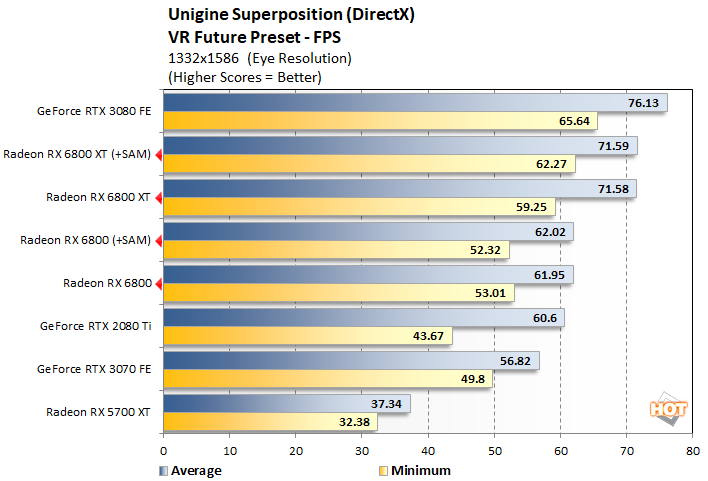 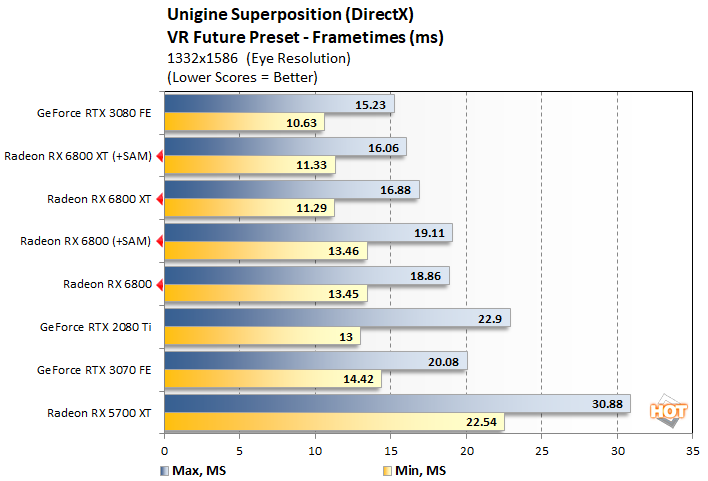 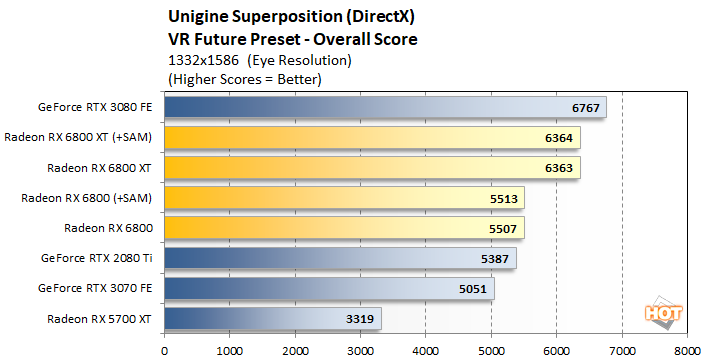 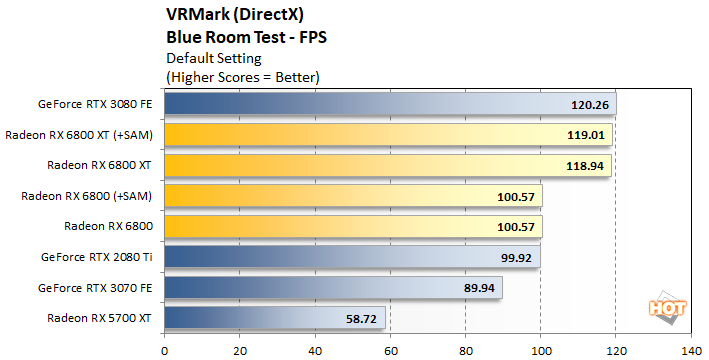 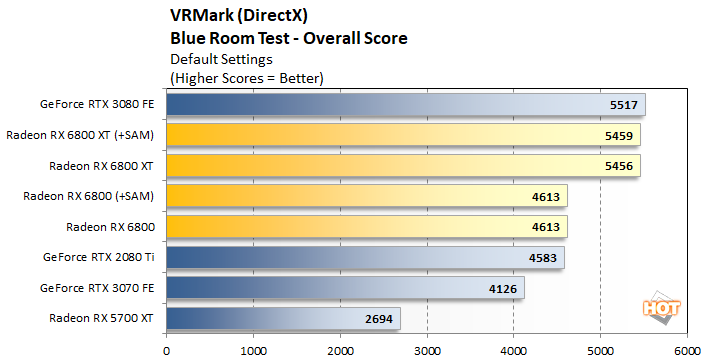 VR Mark tells essentially the same story as Unigine's VR Future benchmark. SAM has virtually no impact on performance (yes, the score was identical from run to run with the 6800 with and without SAM -- that's not a typo), and the new Radeon RX 6800 series cards outpace everything but the GeForce RTX 3080. 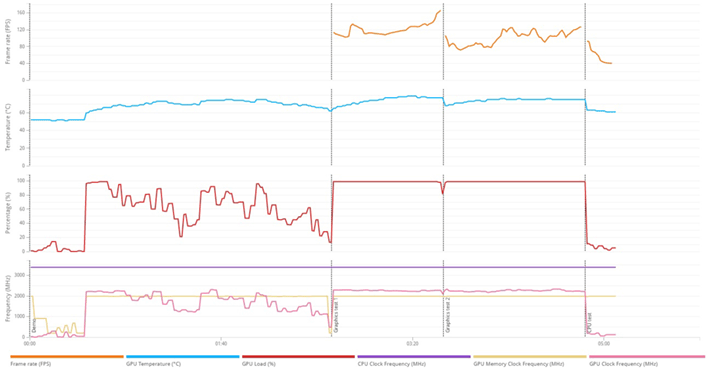 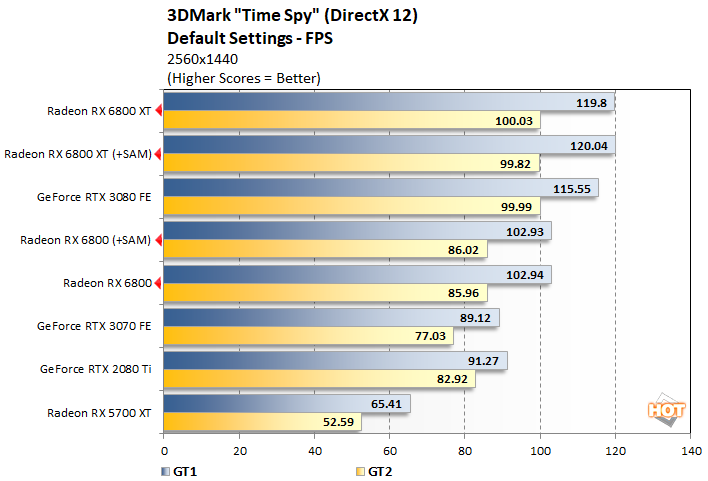 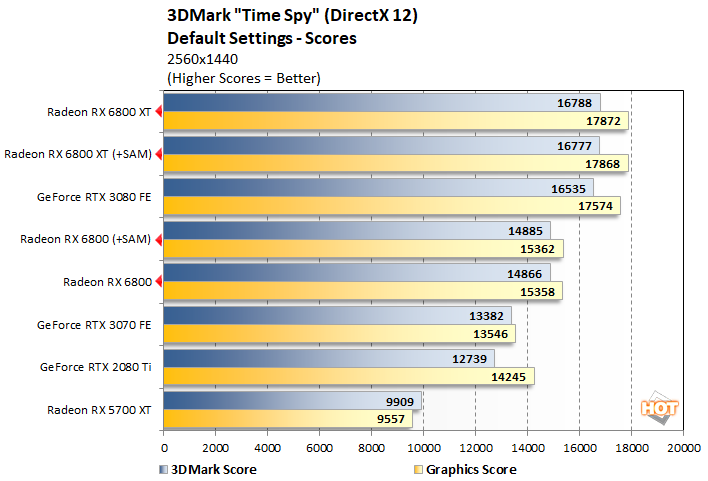 In the DX12-based 3DMark Tme Spy benchmark, the Radeon RX 6800 XT pulls off a clear victory, outrunning every other card we tested, with or without SAM enabled. The Radeon RX 6800 puts up strong numbers here as well, trailing only its big brother and the more expensive GeForce RTX 3080.
3DMark Fire Strike has multiple benchmark modes: Normal mode runs at 1920x1080, Extreme mode targets 2560x1440, and Ultra mode runs at a 4K resolution. GPU target frame buffer utilization for normal mode is 1GB and the benchmark uses tessellation, ambient occlusion, volume illumination, and a medium-quality depth of field filter. The more taxing Extreme mode targets 1.5GB of frame buffer memory and increases detail levels across the board. Ultra mode is explicitly designed for high-end and CrossFire / SLI systems and cranks up the quality even further. GT 1 focuses on geometry and illumination, with over 100 shadow casting spot lights, 140 non-shadow casting point lights, and 3.9 million vertices calculated for tessellation per frame. GT2 emphasizes particles and GPU simulations. 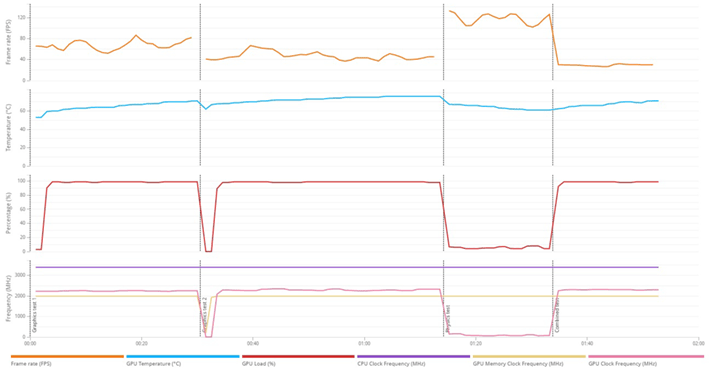 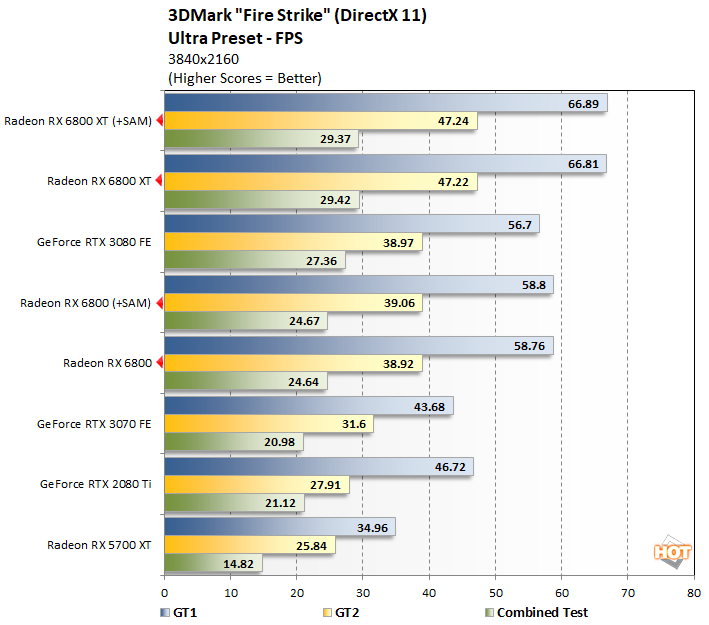 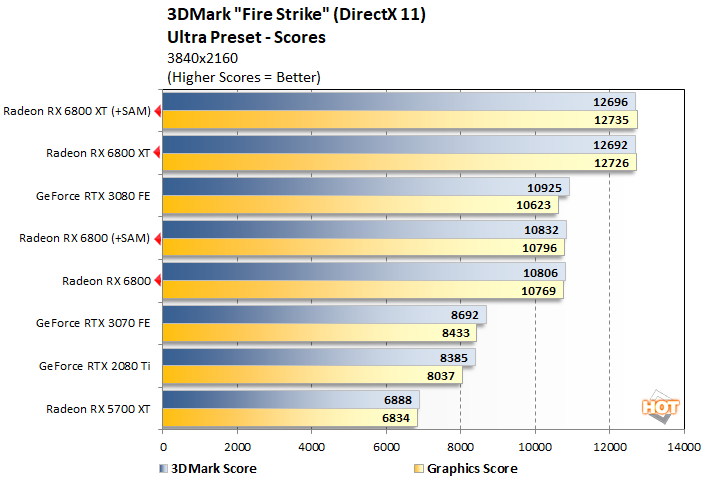 Our results in the DX11-based Fire Strike benchmark somewhat mirror those of Time Spy. The Radeon RX 6800 XT scores another decisive victory here, to finish at the top of the charts. The Radeon RX 6800 also performs well and significantly outpaces the GeForce RTX 3070 and RTX 2080 Ti. 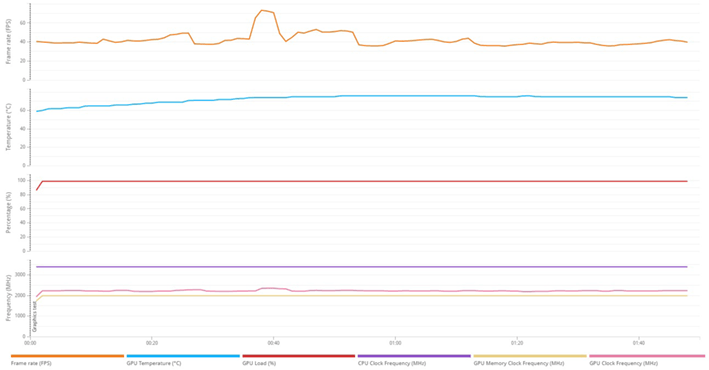 We also experimented with the recently released 3DMark DirectX Ray Tracing Feature test, but the results were less kind to AMD... 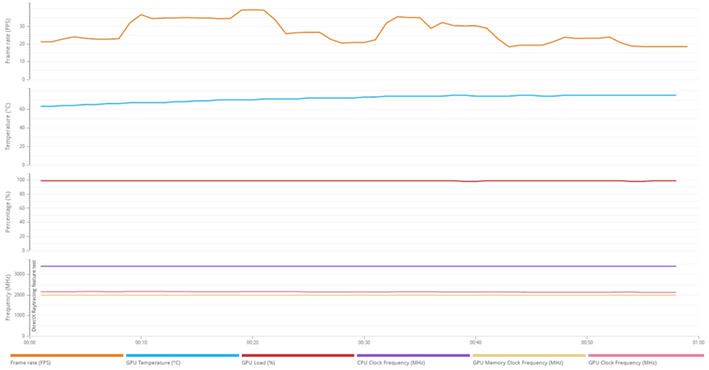