We also spent some time overclocking the Radeon RX 6800 XT using the performance and tuning tools built into AMD's Adrenaline Edition 2020 drivers. Like previous-gen Radeons, when the GPU at the heart of this card is boosting, frequencies and voltages rapidly and dynamically scale up or down, based on the GPU's workload and thermal threshold at the time. 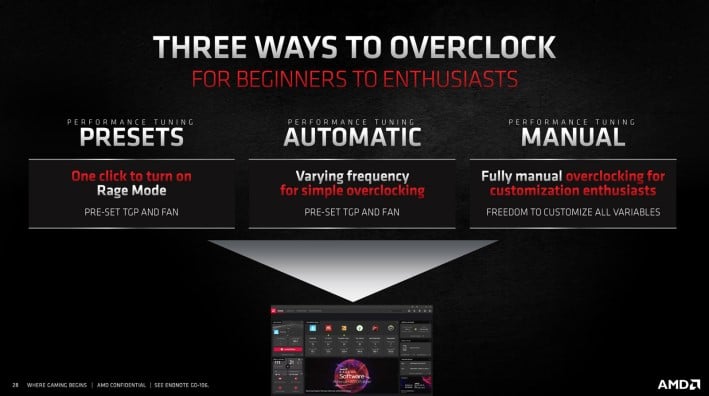 With the tuning options built into AMD's driver suite though, users have multiple ways to tweak performance. Users can manually alter frequencies, voltages, fan speeds, and the max power target using percentages or finer-grained numerical sliders, or they can opt to use various preset modes or auto-tune a number of characteristics, including GPU and memory frequencies and the GPU voltage. 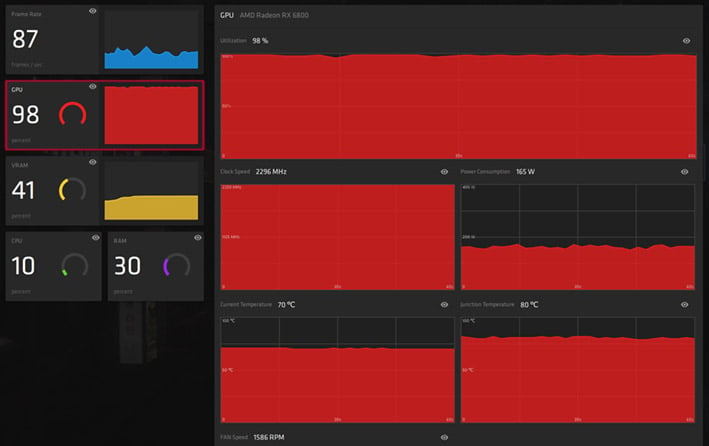 
With previous-generation Radeons, though the GPUs had multiple sensors built-in, a single sensor had been used to determine the GPU temperature and data from that lone sensor was used to control the card's thermal profile. With newer GPUs, like these Big Navi-based Radeon RX 6800s, AMD has incorporated a network of multiple thermal sensors at strategic locations across the die. Data gathered from the sensors is used to determine what AMD is calling the "Junction Temperature", and it's the Junction Temperature that is used to tune the card's power and thermal profiles (the Junction Temperature is effectively the hottest part of the GPU die at any given time). AMD claims the increased resolution and accuracy from the additional thermal sensors allows it to increase overall sustained performance, because throttling based on the Junction Temperature is more reliable and effective. 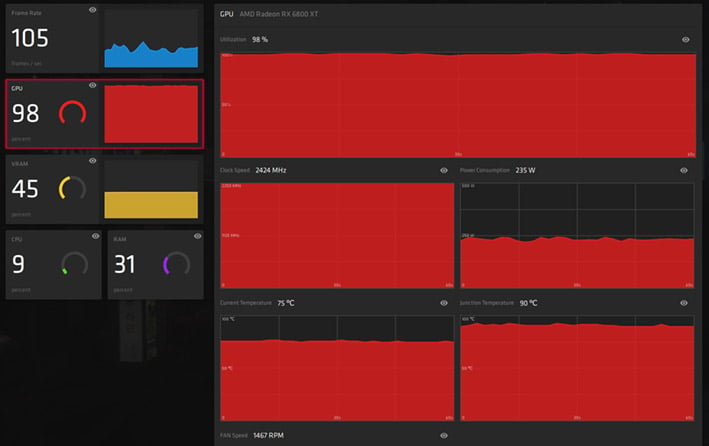 
The tuning options built into AMD's Radeon Software suite offer manual controls, along with automatic under-volting and automatic GPU and Memory overclocking. Ideally, finding the lowest stable voltage and highest stable memory and GPU clocks, while also increasing the max power target and keeping temperatures low, will yield the best overall overclocking results with a RDNA2-based GPU like the ones at the heart of the Radeon RX 6000 series. If you'd rather not muck around though, you could simply enable "Rage Mode", which essentially increases the power target to eek out a bit of extra performance. 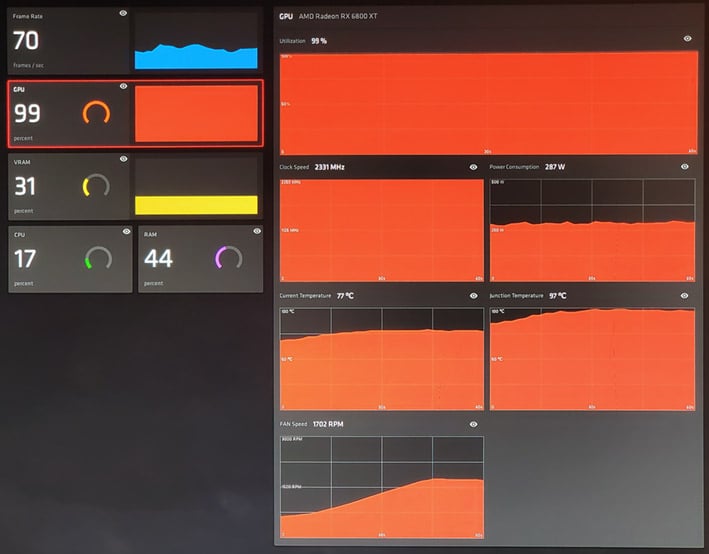 
At its stock settings, we saw the GPU clock typically hovering around the 2,350 - 2,400MHz mark while gaming (give or take, obviously) with the Radeon RX 6800 XT we used for testing. With a little tweaking we found that we could easily max-out the memory clock on our card to 2,150MHz (17.2Gbps), and with a mild under-volt to 1,130mV, a 2,490MHz max boost clock was stable. In the end, we saw slightly higher peak, but a wider-range of real-world game clocks commonly in the 2,300MHz - 2,450MHz range, though it occasionally spiked higher. The junction temperature while overclocked peaked into the high 90°C range with these settings, with a 1,700-ish RMP fan speed when using automatic fan speeds. That's a little hot under the collar in our opinion, so tweaking the fan curve would be advisable if you want to do a little overclocking with one of these cards. 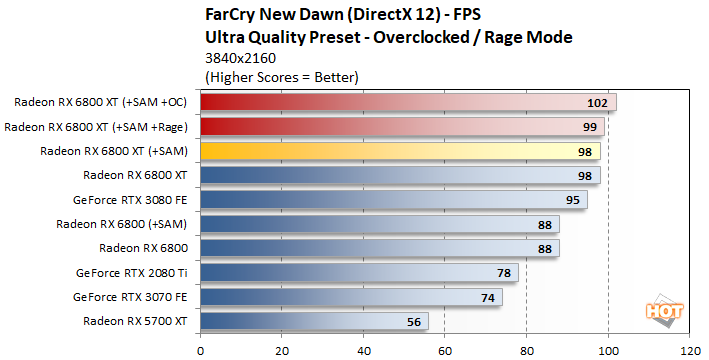 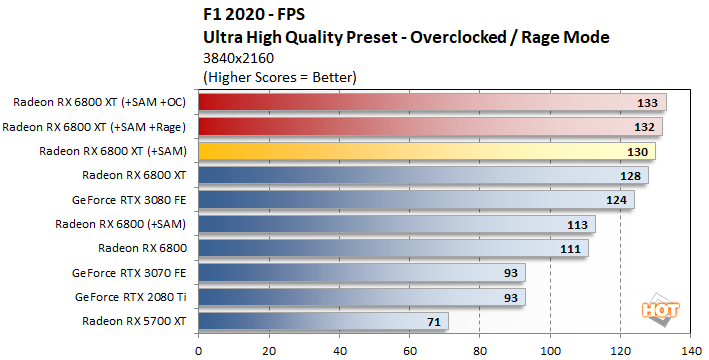 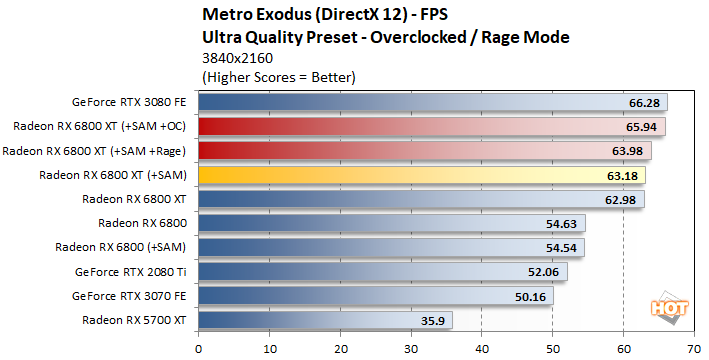 While we had the card overclocked, we only saw some moderate performance improvements of a few frames per second in the games we tested. AMD seems to be aggressively tuning the Radeon RX 6800 XT from the factory, so without some additional cooling massive performance increases aren't too likely. That said, the Navi 21 GPU is clearly capable of hitting some relatively higher frequencies. As these things mature, it's going to be interesting to see what AMD's board partners come up with when custom, hot-clocked models hit the shelves.


We'd also like to cover a couple of final data points regarding power consumption and acoustics before we wrap up. Throughout all of our benchmarking and testing, we monitored noise output and tracked how much power the GPUs were consuming using the NVIDIA PCAT device included with the company's GPU Reviewer Toolkit. Our goal was to give you an idea as to how much power each GPU used while idle and also while under a heavy workload. These power numbers were captured over the entire duration of a 3DMark Fire Strike run, including the full demo, and are indicative of the GPU alone -- not the entire system... 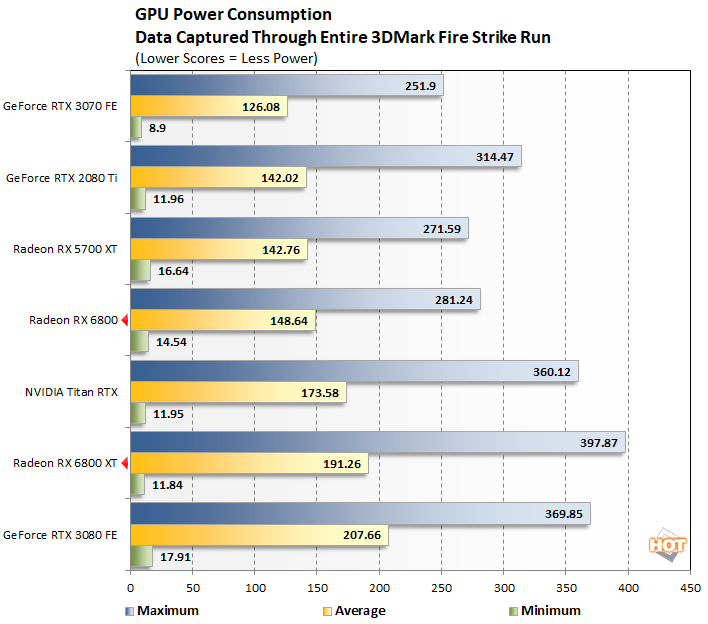 Our power consumption numbers are interesting to say the least. First and foremost, it's obvious AMD has made monumental strides in terms of efficiency. Despite skunking the Radeon RX 5700 XT across the board, by a wide margin, the new Radeon RX 6800 consumes only slightly more average and peak power. Versus the GeForce RTX 2080 Ti and RTX 3070, the Radeon RX 6800 also consumes more power, but the delta is right in-line with card's performance and is not out of whack, like some older Radeon from the pre-Navi era. Shifting focus to the Radeon RX 6800 XT vs. GeForce RTX 3080 comparison, the Radeon used slightly less power on average, but had higher peak power. Again though, taking each cards' performance into consideration, there's nothing too out of line. RDNA2 really delivered for AMD here.


Although the Radeon RX 6800 and RX 6800 XT are clearly more power efficient and feature more capable cooling solutions than previous-gen Radeons, they carry on the tradition of being louder than competing NVIDIA solutions... 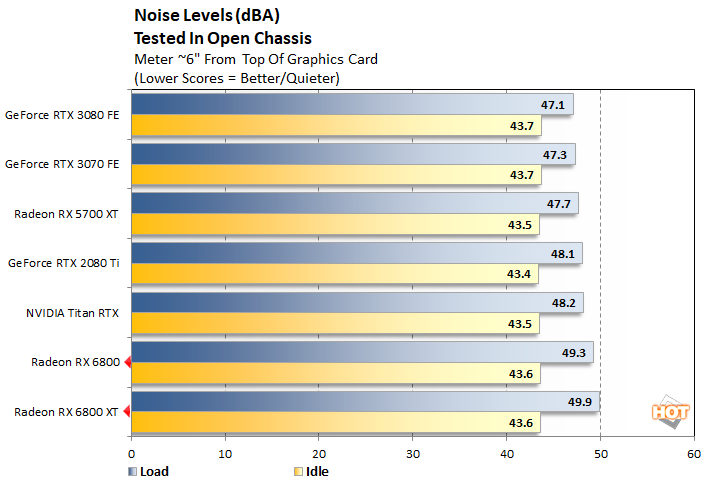 In our real-world setup (we tested the GPUs inside a chassis), the Radeon RX 6800 and RX 6800 XT produced the most noise of the bunch. We measured the sound pressure from about 6" away from the top of the GPU, with the side-panel removed from the chassis. The test system has 3 additional fans -- 1 x 120mm exhaust fan, 1 x 920mm fan on the CPU heatsink, and another 140mm fan in the PSU. Overall, the system is relatively quiet, though its fans do muffle most GPUs, at least until they are placed under a sustained load for an extended period. When that happens, and their fans spin up the Radeons output a few more decibels than the GeForces we tested here. That said, we would not consider the Radeon RX 6800 or RX 6800 XT loud. Their coolers just aren't as quiet as NVIDIA's.

Now that we’ve had our hands on the Radeon RX 6800 and RX 6800 XT for a while, we have a much better understanding of what these cards are, and what they are not. Having digested all of the numbers, its clear AMD has returned to the high-end GPU market with a vengeance and is much more competitive with NVIDIA’s flagship GeForce cards than it has been for years.

All that said, we think the RDNA 2 and the Radeon RX 6000 series positions AMD nicely for the future. NVIDIA’s got better ray tracing performance, but these new Radeons are competitive with compute workloads and traditional rasterization, and they’re out fitted with larger 16GB frame buffers, which builds in some measure of “future proofing” (we use the term loosely) for next-gen, more demanding games. The fact that AMD is powering the latest consoles that just hit also means game developers are going to be intimately familiar with AMD’s RDNA 2 GPU architecture and will likely get the most out of it going forward.

Both NVIDIA and AMD have a lot going for them in this generation – and that’s perhaps the most important point of all. Competition in the high-end GPU market is fiercer than it has been for years, and gamers and enthusiasts have many excellent options to choose from. At their respective $579 and $649 price point, the Radeon RX 6800 and Radeon RX 6800 XT are compelling options that offer strong overall performance and should serve gamers well for years to come.