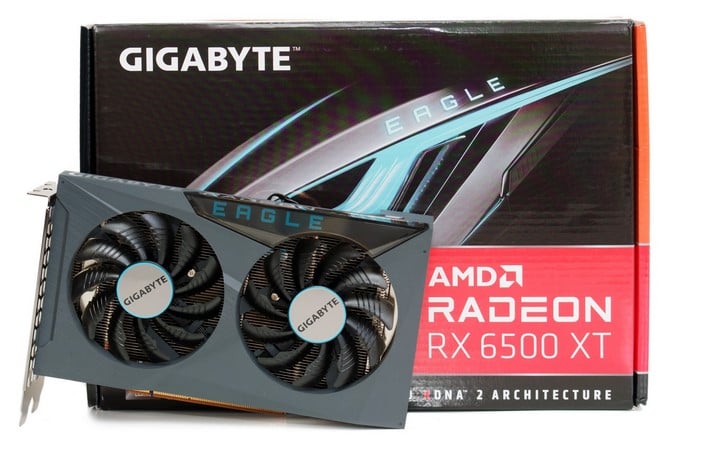 Although some information regarding the AMD Radeon RX 6500 XT leaked late last year, AMD officially took the wraps of the card during its keynote at CES. As its branding suggests, the Radeon RX 6500 XT drops into AMD’s current RDNA 2 GPU line-up, just behind the Radeon RX 6600 we evaluated a few months back. A somewhat scaled down Radeon RX 6400 based on the same chip as the 6500 XT is also inbound, but that card is destined for OEMs only at this point.

The Radeon RX 6500 XT announcement generated quite a bit of chatter due to some of the interesting design decisions AMD made for the card. Radeon RX 6500 XT cards (at least in this initial first wave) would ship with just 4GB of memory and would feature only a PCIe Gen 4 x 4 interface – not the x8 or x16 interface common of higher-end solutions. You can hear about why the company made those decisions in-part, on our livestream chat with AMD’s Frank Azor, if you’re so inclined.

With the current difficulty acquiring graphics cards, the Radeon RX 6500 XT seemed to give some gamers a tiny ray of hope. With only 4GB of memory, the card won’t be particularly interesting to crypto-miners. And with a sub-$200 MSRP, it could make for an affordable upgrade for users making due with integrated or previous-gen graphics.

But, we’re getting ahead of ourselves. Let’s take a look at some of the particulars, then we’ll dive in and see what makes the Radeon RX 6500 XT tick and how it performs... 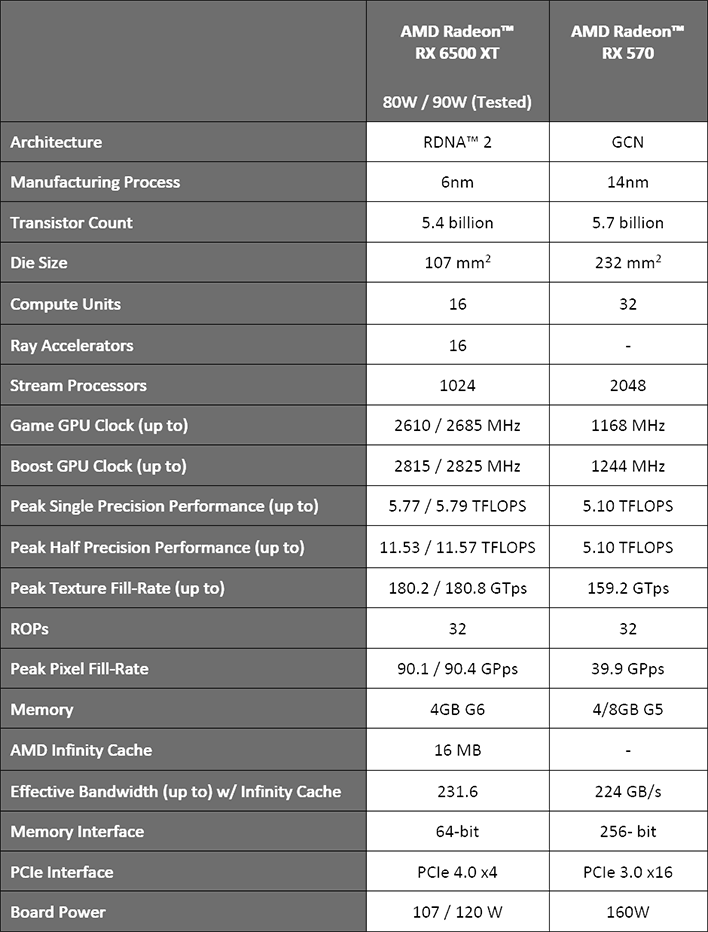 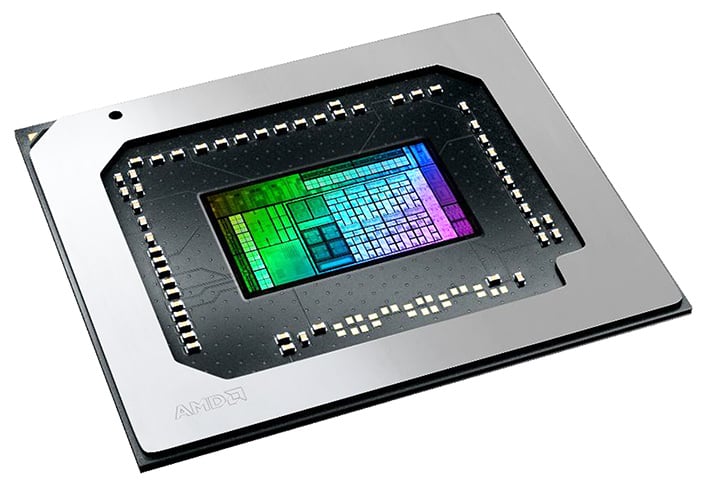 
In the table above, the Radeon RX 6500 XT’s main features and specifications are compared and contrasted against the older Polaris-based Radeon RX 570 – but keep in mind, there is a Radeon RX 5500 XT on the market as well. Versus the Radeon RX 570, however, the new RX 6500 XT offers some significant improvements in compute performance and fill-rate, despite some seemingly lower specs. Single Precision performance is slightly higher than the RX 570’s, but Half Precision is more than 2x higher, as is the peak pixel fill-rate.

The Navi 24 GPU powering the Radeon RX 6500 XT is comprised of fewer transistors (5.4B vs. 5.7B), even with its 16MB AMD Infinity Cache taking up a big chunk of those, and its die size is only 107mm2 – less than half the size of the RX 570’s. That's a tiny piece of silicon in contrast to higher-end solutions. That smaller die is due in large part to the advanced 6nm process used to build the chips, along with having half the number of stream processors (1024 total), only a 64-bit memory interface, and a quarter of the PCI Express lanes. 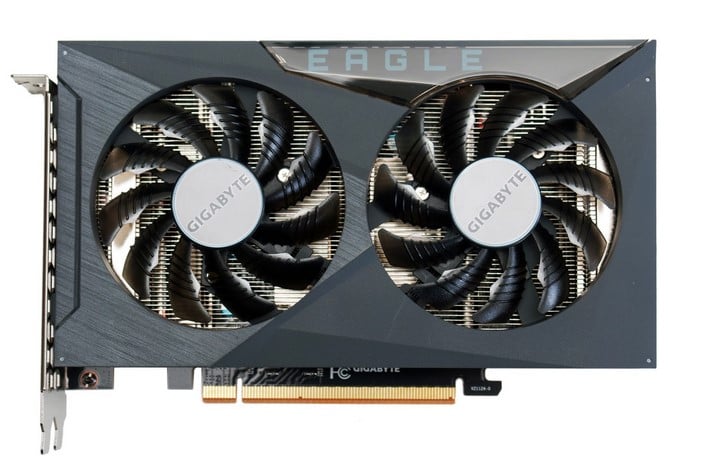 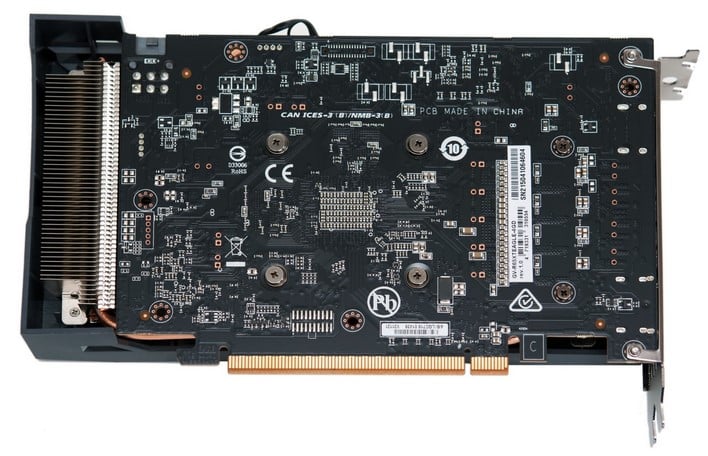 That much smaller chip with relatively narrow interfaces, a mature RDNA 2 architecture, and 6nm manufacturing process also means the Radeon RX 6500 XT is a low-power part. AMD rates typical board power at only 107W, though partners that offer overclocked models may approach 120W. Even with its low power envelope though, the Radeon RX 6500 XT is the highest-clocked GPU we’ve seen to date. Typical game clocks will fall in the 2.6GHz+ range, with boost clocks exceeding 2.8GHz. With a little overclocking, frequencies even higher are possible, as you'll see a little later. The card has fast 18Gbps GDDR 6 memory onboard too. AMD claims that fast memory, in conjunction with the 16MB of Infinity Cache, results in effective peak memory bandwidth of over 230GB/s. However, when the cache doesn’t come into play, it’ll peak at only 144GB/s. 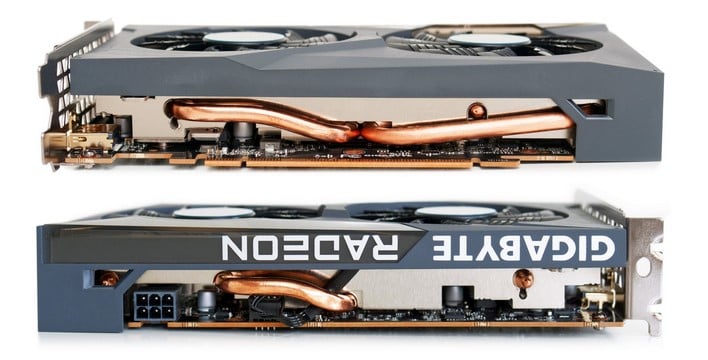 Other features of the Radeon RX 6500 XT include hardware accelerated decode of H.264, H.265, and VP9 codecs, but no accelerated encoding and no AV1 acceleration at all. That means streaming movies won’t consume many CPU cycles, but the GPU won’t be much help encoding video. Because Navi 24 is based on RDNA 2, the Radeon RX 6500 XT also supports most of the features available on its bigger cousins, like AMD Radeon Anti-Lag. FidelityFX Super Resolution (FSR), Smart Access Memory, etc. The lack of hardware accelerated media encoding, however, means AMD ReLive support will be lacking.

There also won’t be any Radeon RX 6500 XT reference boards coming direct from AMD. All of the cards that hit retail will come from AMD’s partners, like the Gigabyte Radeon RX 6500 XT Eagle 4G pictured here. There will be an array of designs coming down the pipeline, but all of them will be low-power entry-level solutions, with small form factors relatively to higher-end cards.

The Gigabyte Radeon RX 6500 XT Eagle 4G is a squat fellow, that’s barely over 7” long, including the cooler – the PCB is only slightly longer than 6”. The card is two slots wide and requires a single 6-pin PCIe power feed. There are dual axial fans on the card that sit atop a relatively large array of aluminum heatsink fins, linked together by a couple of copper heat pipes. Considering the low-power nature of the Navi 24 GPU, a cooler this size is plenty effective and doesn't generate much noise. We'll talk more about acoustics a little later. The card has a sharp, angular design language, but no excess bells and whistles, like RGB lighting or a switchable BIOS, etc. The outputs on the card (and other Radeon RX 6500 XTs) consist of only a single full-sized DisplayPort and a single HDMI output.

With all of that covered, what do you say we plug the Radeon RX 6500 XT into the test rig and take her for a spin? The benchmarks are up next...