Like previously-released Radeons, when the Navi 24 GPU powering the RX 6500 XT is boosting, frequencies, voltages and fan speeds dynamically scale upward or downward, based on the GPU's workload and the thermal and power thresholds at the time. Those frequency and voltage curves, which determine the card's overall performance, however, can be altered to increase performance, save power, or sometimes both... 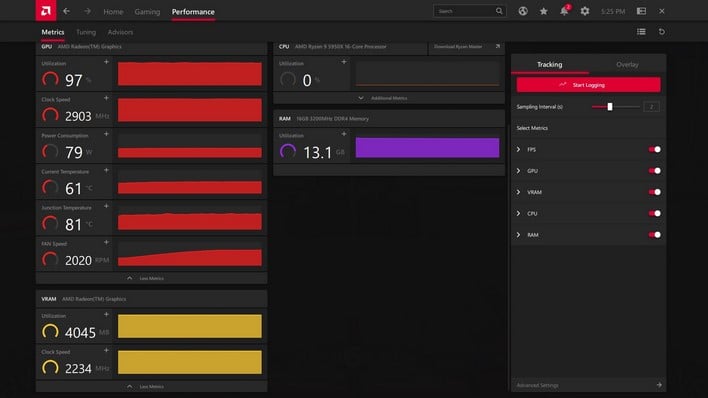 With the tuning options built into AMD's Radeon Software, users have multiple ways to tweak a card's performance. Users can manually alter frequencies, memory timings, voltages, fan speeds, and the max power target using percentages or finer-grained numerical sliders, or they can opt to use various preset modes to auto-tune GPU and memory frequencies, as well as the GPU voltage, including an under-volting option.

With older Radeons, though the GPUs had multiple sensors built-in, a single sensor was used to determine the GPU temperature, and data from that one sensor was used to control the card's thermal profile. With newer GPUs, like the Navi 24 used on the Gigabyte Radeon RX 6500 XT Eagle 4G, AMD has incorporated a network of multiple thermal sensors at strategic locations across the die. Data gathered from the sensors is used to determine what is called the "Junction Temperature", and it's the Junction Temperature that is used to tune the card's power and thermal profiles (the Junction Temperature is effectively the hottest part of the GPU die at any given time).

AMD claims the increased resolution and accuracy from the additional thermal sensors allows it to increase overall sustained performance, because throttling based on the Junction Temperature is more reliable and effective. 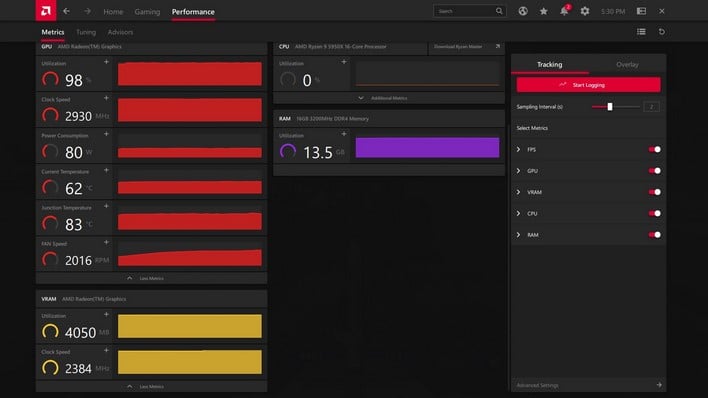 
At its stock settings, we saw the GPU clock typically hovering in the 2,700 - 2,800MHz range while gaming (give or take) with junction temperatures in the low 80°C range on our particular sample. With a little tweaking we found that we could crank up the peak GPU clock to 2,935MHz, max-out the memory clock on our card to 2,400MHz, with default memory timings enabled. In conjunction with a mild under-volt to 1,180mV with a +10% power target, we typically saw a wider-range of real-world game clocks, commonly in the 2,800MHz - 2,910MHz range, though it occasionally spiked higher as you can see in the screenshot above. The junction temperature while overclocked peaked in the low 80°C range with these settings, without any modifications to the fan curve. Navi 24, at least according to the reporting built into AMD's drivers, is a relatively cool running GPU. 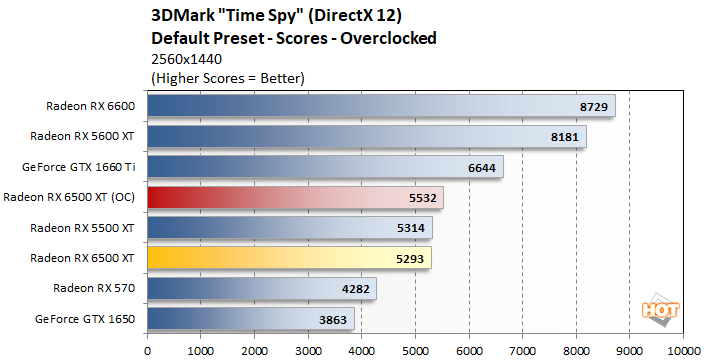 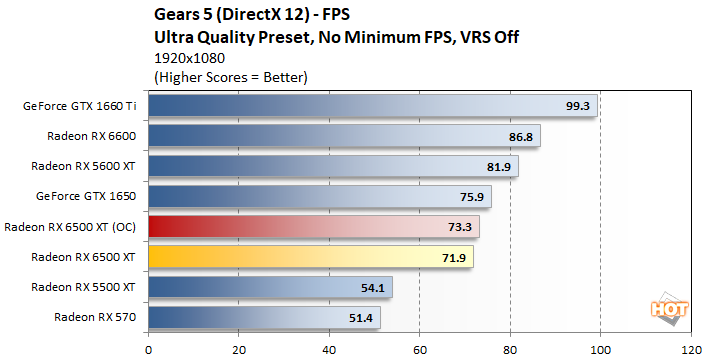 While we had the card overclocked, we re-ran a couple of tests and saw some mild performance increases. While overclocked, the Radeon RX 6500 XT was able to overtake the 5500 XT in Time Spy and it gained a couple of frames per second in Gears 5 as well.

We'd also like to cover a couple of final data points regarding power consumption and acoustics before we wrap up. Throughout all of our benchmarking and testing, we monitored noise output and tracked how much power our test system was consuming. Our goal was to give you an idea as to how much power each GPU used while idle and also while under a heavy workload. These power numbers were captured while idle at the Windows desktop and during a 1080p run though of the FarCry 6 benchmark... 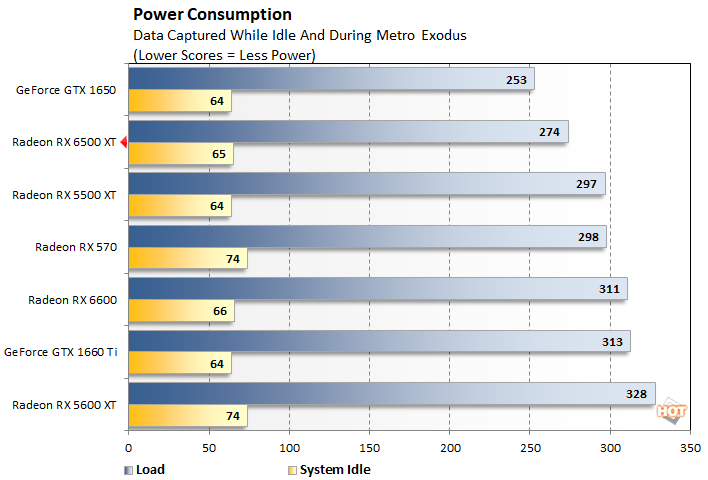 The new Radeon RX 6500 XT is one of the more power-friendly GPUs of the bunch. Despite offering much better performance (more often than not) then the GeForce GTX 1650, the 6500 XT consumes only slightly more power. In comparison to the Radeon RX 5500 XT and Radeon RX 570, however, the new 6500 XT uses significantly less power when under load.

With such low power consumption, and a relatively capable dual-fan cooler, we can also report that the Gigabyte Radeon RX 6500 XT Eagle 4G remains quiet under normal operating conditions. At idle the card is inaudible over the other fans in our test rig and under load, while the fans on the card do spin up to somewhat audible levels, they remain quiet and only produce a dull whir. With its stock fan curve, the fans barely break the 2,000 RPM mark, whether the card is running at default frequencies or overclocked.

The Radeon RX 6500 XT is an interesting animal. First, let’s discuss what the card is not. The Radeon RX 6500 XT is not a significant upgrade over the previous-gen Radeon RX 5500 XT. Though the 6500 XT is faster in some situations due to its newer architecture, high clocks, and Infinity Cache, the 5500 XT’s wider memory interface and higher native peak memory bandwidth give it an edge in some games. Although the Radeon RX 6500 XT also technically supports ray tracing, it is more of a check box feature than something useful with only 4GB of memory on the card. Every ray tracing-enabled app we tried barked about the 6500 XT’s 4GB of memory and didn’t perform well. Sure, we could have lowered the resolution below 1080p, lowered the in-game image quality settings, and used FSR where supported, but doing so kind of negates the purpose of ray tracing in the first place. The Radeon RX 6500 XT’s x4 PCIe interface, lack of accelerated video encoding, and dual display outputs are also somewhat of a step backward. 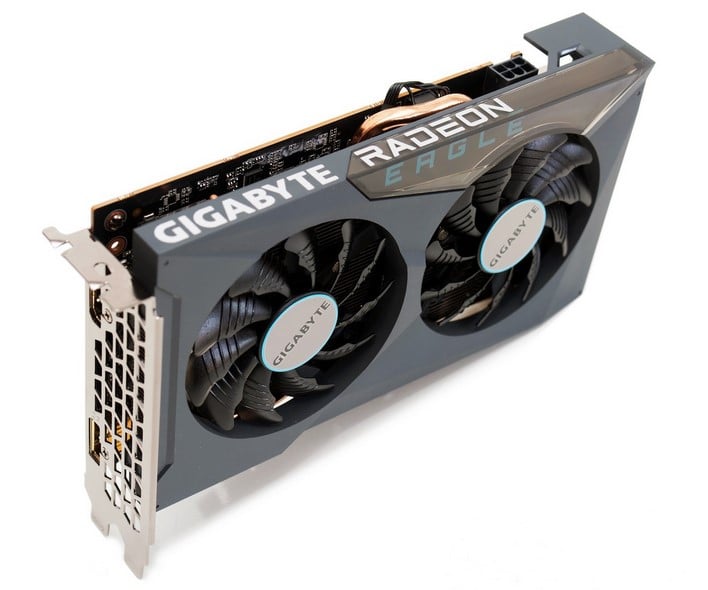 That said, the Radeon RX 6500 XT is a step up over cards like the older Radeon RX 570 and NVIDIA’s entry-level GeForce GTX 1650. In the bizarro world we’re currently living in, GTX 1650s are selling for over $300, RX 570s command even more, and don’t get us started on the 5500 XT where some 8GB models are being sold for nearly $1500. We’re under no delusions that the Radeon RX 6500 XT is going to be widely available at its $199 MSRP (though, we’ll remain optimistic and put some positive vibes out there). However, if it is available for much less than cards it outperforms, that’s a small win, especially considering how many gamers are still chugging along on lower-end cards than the RX 570 or GTX 1650. Gamers stuck on integrated graphics hoping for something may also find some solace in the Radeon RX 6500 XT, assuming availability is there.

All told, the Radeon RX 6500 XT probably won’t get your adrenaline pumping, but for those itching for a modern, affordable, mainstream GPU for some 1080p gaming action, the Radeon RX 6500 XT will do. If you have the scratch and can find something one notch up the ladder though, there’s lots of additional performance to be had.