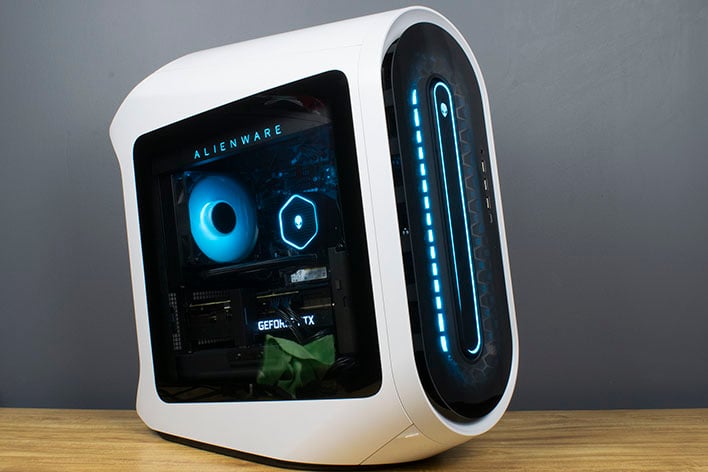 If there's been one drawback to Alienware's previous gen Aurora desktop series, it's that the systems we've gotten in for review have made a bit of a racket at times. These systems have always been well-equipped with the latest hardware and turn in some great performance, but their noise floor has sometimes been a drawback compared to some competitive offerings. It doesn't matter if we're looking at an Intel-powered version or its AMD-equipped counterpart, previous Aurora systems have tended to be louder than their 40-liter volumes suggested they should be. Regardless, It should come as no surprise that we were pretty stoked when Dell announced that the company had given the Aurora lineup a new, buffed-out chassis redesign, with a focus on airflow and acoustics.

With this new Aurora, the liquid CPU cooler's radiator is mounted as a rear exhaust instead of at the top of the chassis, with plenty of open space to push hot air, and the front intake area of the system has also been optimized for better air flow. It also looks a lot prettier now as well, with a glass side panel to admire its high-end components within, but did it make a difference in how the Aurora handles heat and acoustics? Well, let's not get ahead of ourselves; first we need to meet the new Alienware Aurora R13, now infused with Intel's 12th Gen Core processor platform technology, aka Alder Lake. 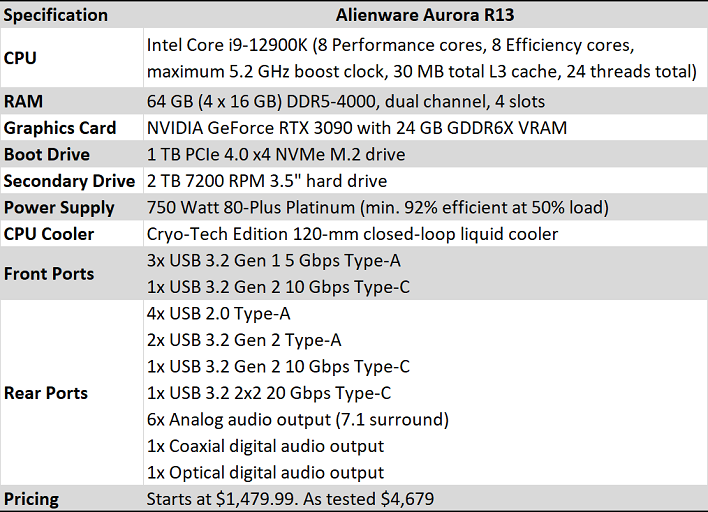 
First up, it's officially Alder Lake Day, which should probably be a national holiday or something? Maybe that's a bit over the top but, the new Aurora R13 ships with Intel's latest CPU tech, and our review unit is driven by the mighty Core i9-12900K, which has eight Performance cores with Hyper Threading and an octet of Efficiency cores to handle lighter duty threads and background tasks. The CPU's maximum turbo clock of 5.2 GHz will turn some heads, as will its impressive single-threaded grunt. For the full rundown, check out our in-depth Alder Lake review. The CPU is kept cool with Alienware's beefy but compact Cryo-tech Edition liquid cooler with a 120-millimeter fan pushing air out the back of the system.


Because these newest Intel CPUs support DDR5, our system comes configured with the new breed of memory as well. In this case, we have four 16 GB DIMMs of DDR5-4000, although buyers can opt for just a pair of DIMMs for 4400 MT/s speeds if they so choose. These sticks are decidedly not fancy, with their bare PCBs and total lack of heat spreaders. It wasn't an issue in the Aurora R13, of course, but it may be a little bit of a shock for some of you to see naked RAM. For storage, the system has a 1 TB Samsung PM981A NVMe PCI-Express 4.0 SSD and a 2TB Seagate Barracuda 7200 RPM hard drive. Buyers can opt to skip the spinning drive in favor of a second NVMe gumstick, though. Along with the 3.5" bay at the top, there's a 2.5" drive bay with an included sled along the bottom as well.

A gaming PC is only as good as its graphics card, and of course the Aurora R13 can come with serious horsepower. Our review unit has NVIDIA's GeForce RTX 3090 aboard, but if this enormous GPU is outside your budget, the system can be scaled all the way back to a GeForce GTX 1650 SUPER. The Aurora R13 with RTX 3090 we tested has 24 GB of GDDR6X VRAM, a pair of standard 8-pin PCIe connectors, and enough resources to rip through any game at high resolutions and max details at breakneck speeds. AMD fans can also equip this system with graphics cards from the Radeon RX 5300 up to the biggest Navi of them all currently, the Radeon RX 6900 XT.


There's also onboard Killer's E3100 2.5-Gigabit Ethernet onboard with a single RJ-45 jack on the rear panel. Inside the system, Alienware ran a pair of antennas for the Realtek 8822C 802.11ac Wi-Fi and Bluetooth module. We'd have liked to have seen 802.11ax Wi-Fi 6 connectivity, but the setup inside the Aurora still maxed out our 400Mbps fiber connection to the outside world. Regardess, when the system, as tested, prices out to be nearly $4,800, this still seems a little stingy when you consider Intel's 12th Gen Core platform architecture is optimized for the latest in connectivity. Fortunately, the system's Wi-Fi module is a standard M.2 format, so it can be replaced easily down the road.

Previous Aurora systems were pretty cramped, but the new design opens things up considerably. The GeForce RTX 3090 in our system has a triple-slot cooler, which should keep its thermals under control, but it's awfully close to the 750-Watt power supply right underneath. The whole inner chamber is roughly the size of a micro-ATX build and there's not really any room for a longer graphics card than what's already installed. Then again, Dell-Alienware did drop in an RTX 3090 here so you really can't complain. The Aurora R13's front shroud houses one of two 120-millimeter front intake fans, which should create continuous positive air pressure as well, which is a very good thing. The front of the system is a flat, solid piece of transparent acrylic with vents all the way around it to bring in air. While DIY gaming PC cases have embraced mesh and open air flow, this might be a bit more restricted, though our temperature measurements were relatively tame, but more on this shortly. Regardless, this all amounts to a pretty big improvement over past Aurora systems.

Alienware was founded on the sci-fi aesthetic of extraterrestrial visitors, and the updated Legend 2.0 chassis on the Aurora R13 exudes that alien chic motif. Rounded edges and a slightly rotated and angled system orientation certainly grab the eye. So do a pair of RGB zones, both of which are mixed together. The Alienware logo on the cooler's pump glows a different color than the rest, and so does the background of the front panel's TRON Lightcycle-inspired ring. The front panel isn't all for show, however, as it's also home to three USB 3.2 Gen 1 Type-A ports at 5Gbps, and one USB-C port that can push 10Gbps. 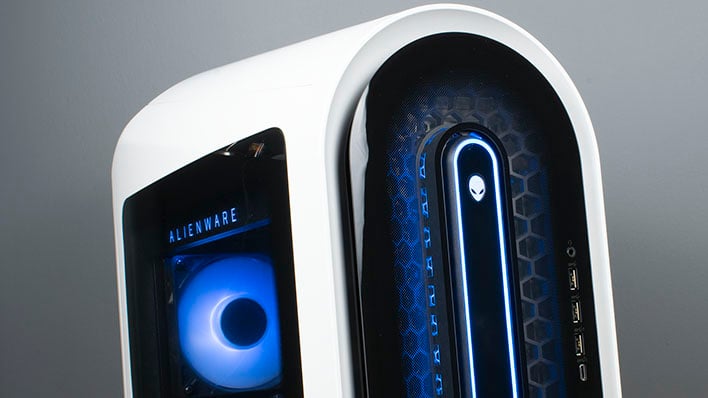 To really complete the look of the Aurora R13, Alienware included the optional rear port cover. The honeycomb design and open top and bottom ensure that the port cover doesn't impede airflow at all, but it does tidy up the rear of the system nicely. It also adds around 3" to the total length of the system, although it gains some of that back by draping the cords down the back of the inside. This cover attaches smartly with magnets, and it takes just one hand and a little tug to break it free from the back.

The redesign effort allowed Alienware to increase the internal volume of the system by 50%, but the company's dedication to its industrial design language means that the exterior of the system is also around 50% larger by volume. The approximate 45-liter displacement of the R10 and R11 has been replaced by a roughly 65-liter R13 chassis. It's surprisingly similar in stature to my own PC's Fractal Design Define S2 Meshify, and it's actually a bit taller. Without the rear port cover, the Aurora is a bit shorter, and the two cases are similar in width, which gives the two similar sizes by volume. The DIY PC makes a bit better use of its size, however, by including room for a full-sized ATX motherboard and more drive bays. Still, we don't think most gamers will find the expandability of the Aurora to be limiting in any significant way.


But ahh, for the first time, Alienware PCs have embraced transparent windows and internal lighting. And all this system's extra RGB accoutrements really shine when the power supply doesn't fold over the top of the CPU like it did on older Aurora systems. This Alienware desktop looks really sharp with the window and colors cycling through its LEDs. Those who aren't fans of the bling need not worry; the lights can be turned off entirely inside Alienware's Command Center utility, and there are solid side panel options available from Alienware. That panel pops off very nicely by backing out a single captive screw on the back and pulling the lever that the screw held down. 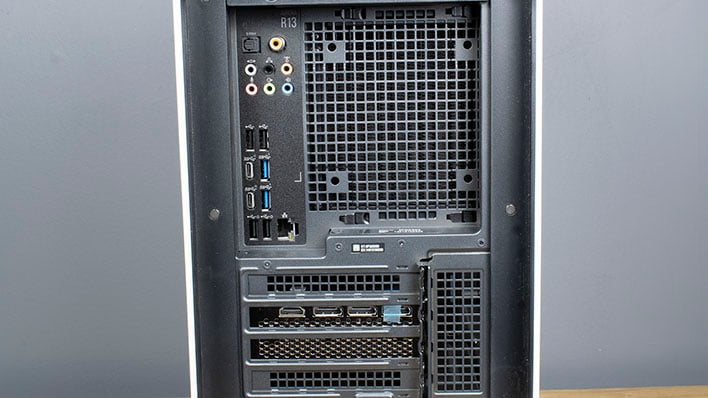 Speaking of the back, there's plenty of expandability on the Aurora r13. We find a total of four USB 2.0 ports, two more 5 Gbps Type-A USB 3.2 ports, one 10Gbps USB 3.2 Gen 1 port, and a brand-new 2x2 USB-C port that can push a full 20Gbps through it. There's also the Ethernet connector, analog 7.1 surround sound, coaxial digital audio, and an optical output. Below that, Dell's semi-custom GeForce RTX 3090 GPU has three DisplayPort connections and an HDMI 2.1b output. At the very bottom is the AC plug for our unit's 750 Watt 80-Plus Platinum rated power supply. The 80-Plus Platinum spec requires that the power supply be 92% efficient at a 50% load and 89% efficient at a 100% load, so it shouldn't generate much additional heat due to efficiency losses.

The Aurora R13 shipped to us with Windows 11 Pro preinstalled. Microsoft's newest version of Windows has some goodies baked in for Alder Lake, so we're glad that it wasn't back on Windows 10. Whatever heartaches Windows 11 has caused, Microsoft has been speedy to issue patches, and a lot has changed in the first 30 days of availability. 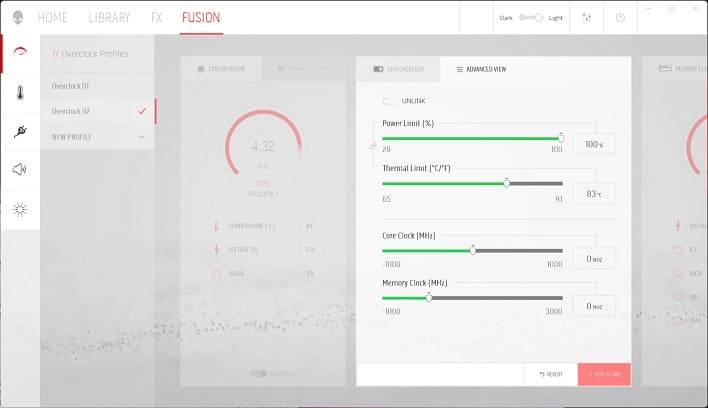 The software experience out of the box with the Aurora is pretty svelte and stays out of the way. There was a McAfee trial included that displayed enough alerts that we sent it packing, but everything else is either drivers, control panels for different hardware features or OEM system update utilities. Alienware Command Center was also installed, which allows controlling the two RGB zones and has a couple of overclocking profiles built in that you can also tie to your game library to kick off when your favorite game is engaged. Those profiles didn't seem to do much for power consumption or performance, however, but our review period was during the Intel and Dell pre-launch window, so this may change on retail units.

Now that we've taken a pretty thorough tour of the Alienware Aurora R13's hardware and software features, let's move on to see how it performs in our favorite games and application benchmarks.
NEXT PAGE