Alienware is fast approaching its 25th birthday, and in celebration of the special occasion, Dell is gifting the iconic brand a visual and functional makeover for the new Alienware Aurora desktop. Yes, when you reach adulthood, it's typically a good time to consider a new look. The revamped desktop still maintains its trademark design language, mind you, but in a different mold aimed at vastly improving airflow while reducing noise output at the same time.

Dell says it designed (or re-designed, really) the Alienware Aurora from the inside-out, with an aim towards harmonizing performance, easy upgrades, and optimized acoustics. What it came up with is another uniquely shaped chassis with 1.5x the internal volume compared to the Aurora R12 or R10. 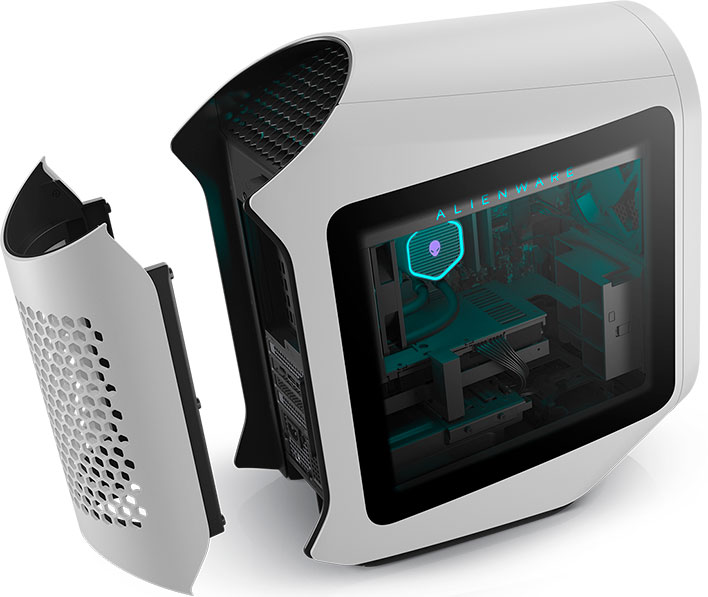 According to Dell, this qualifies as an "open-air design," though that's using the term rather loosely. Regardless, the upshot of the redesign is that Dell says it managed to increase the internal chassis volume by 50 percent, while only expanding the overall footprint by a little bit. Along with a reorganized layout, Dell points to cleaner cable management, greater airflow, and improved acoustics.

Dell says freeing up so much extra space is a "game-changer," though that alone doesn't account for better airflow. There's also a new thermal design at play, with support for four 120mm fans and, optional, liquid cooling. 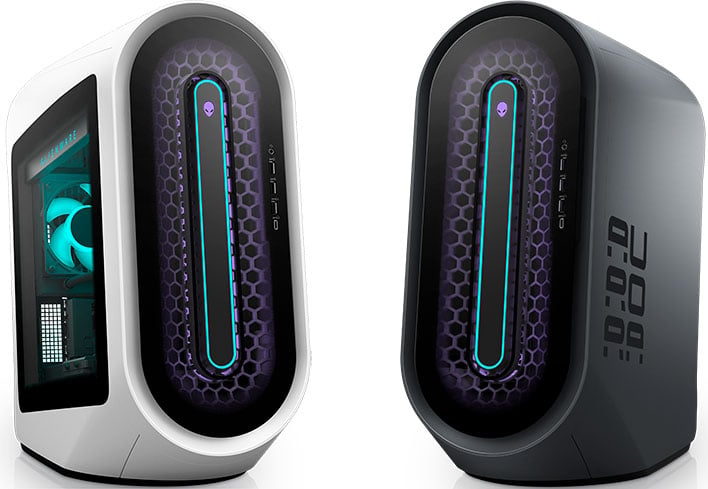 "The Aurora answers the call for higher airflow efficiency by intaking cool air through the honeycomb-shaped airways on the front of the desktop moving it across the motherboard and performance components before evacuating it out the backside of the chassis," Dell says.

Compared to last-gen, Dell says the new Aurora is up to 16 percent quieter at idle, up to 9 percent when hammering the CPU, and up to 15 percent when overclocked.

This will all vary by configuration, but the takeaway is that Alienware Aurora buyers can expect a quieter and higher performing machine, based on Dell's claims. How much better? Dell says its own testing showed a 5 performance increase from the same NVIDIA GeForce RTX 3090 graphics card inside the new Aurora, compared to the Aurora R12. 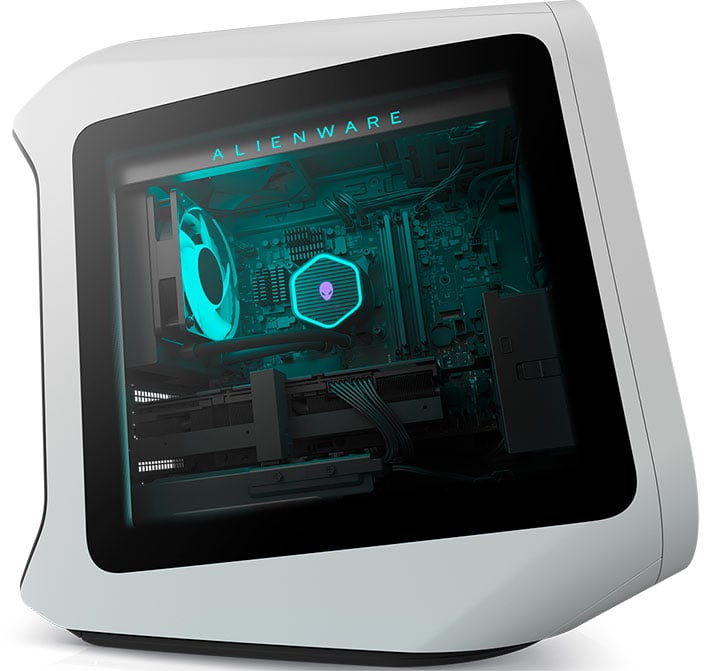 There is at least one compromise that comes with all this. Dell says it built a custom (read: proprietary) motherboard with power connections placed towards the edge. This is to prevent any airflow obstructions, and it also negates the need for a daughter board to handle front I/O chores—each USB port has a direct lead in to the core architecture. It also means you won't be swapping out the mobo with an off-the-shelf alternative, if you ever wanted to upgrade the guts.

As expected, customizable AlienFX is part of the package. What was perhaps not expected, though, is the inclusion of a transparent side window. This is a first for an Alienware desktop. In addition, buyers can opt for a magnetic cable cover to help hide read cables, something Dell said it designed with esports gamers in mind (since the rear is sometimes seen in broadcasts).

Pricing, availability, and configuration options have yet to be announced, so stay tuned. In addition, you can tune into a special Alienware livestream today at 3pm ET