Although IOMeter is a well-respected industry standard drive benchmark, we're not totally comfortable with it for consumer testing SSDs. The fact of the matter is, though our results with IOMeter scale, it is debatable whether or not certain access patterns, as they are presented to and measured on an SSD, actually provide a valid example of real-world performance. The access patterns we tested may not reflect your particular workload, for example. That said, we do think IOMeter is a reliable gauge for relative available throughput with a given storage solution. In addition, there are certain higher-end workloads you can place on a drive with IOMeter, that you can't with most other storage benchmark tools available currently. 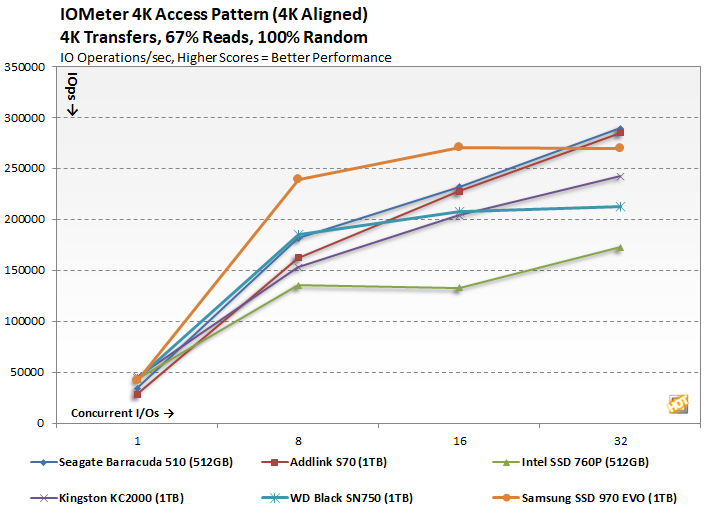 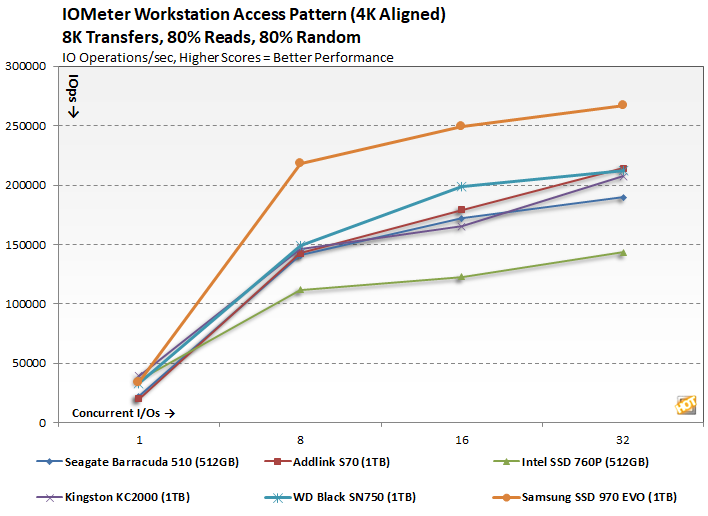 Most desktop and consumer oriented workloads fall into the 1QD arena (or one concurrent I/O on our chart), and in that regard, the Addlink S70 doesn't fare particularly well. However, if your workload can keep the queue depth a little higher and work more operations at a time, the Addlink rises to the middle of the pack, hanging with some more expensive drives like the WD Black SN750 and Kingston KC2000. In the 4K test, the Addlink can even topple Samsung's mighty 970 Evo with more concurrent operations going. When looking at it in that light, Addlink's budget-priced NVMe drive impresses. 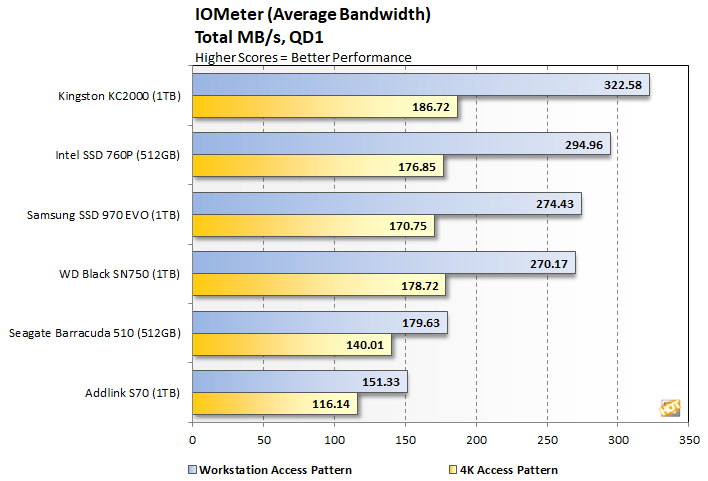 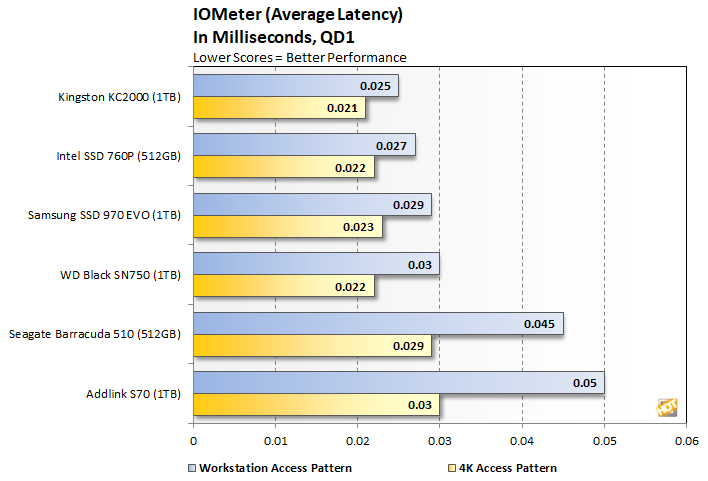 The drive's bandwidth and latency results don't do the Addlink drive any favors, since we focus on a queue depth of just one. The drive's caboose-pulling bandwidth scores are fueled by the longest latency of any drive in this pack, at least with these workloads in IOMeter. There's a clear line drawn between the next-fastest drive, Seagate's Barracuda 510, and the rest of the pack, and the S70 finds itself on the wrong side of the tracks.
Next up we ran the Compression Benchmark built-into AS SSD, an SSD specific benchmark developed by Alex Intelligent Software. This test is interesting because it uses a mix of compressible and non-compressible data and outputs both Read and Write throughput of the drive. We only graphed a small fraction of the data (1% compressible, 50% compressible, and 100% compressible), but the trend is representative of the benchmark’s complete results. 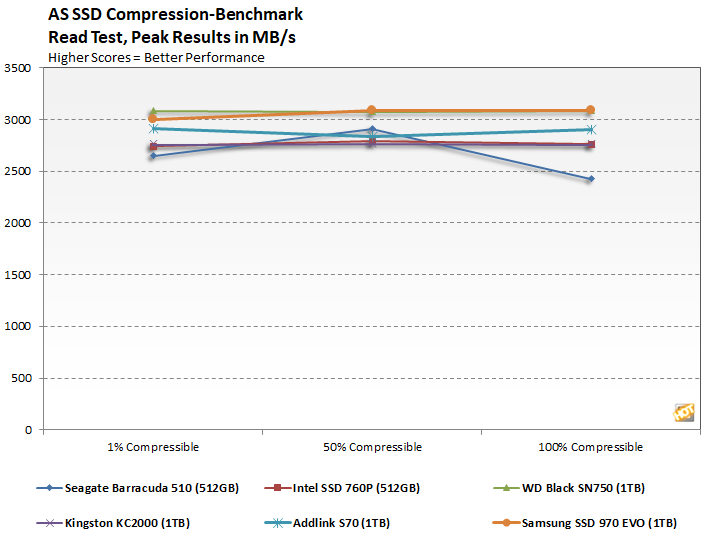 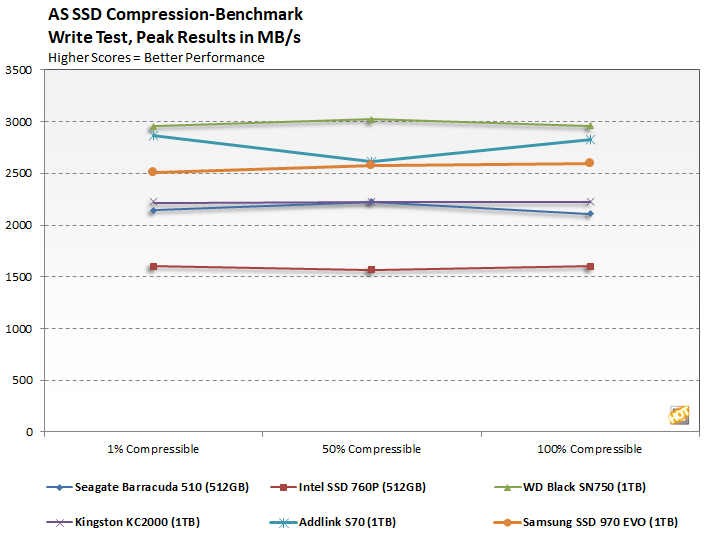 Much like every other drive in our test pack, the compressibility of the data being transferred across the Addlink S70 had very little effect on read speeds. Addlink's midrange SSD did stumble a little bit in the 50% compressible write test, but not enough to be surpassed by any of the drives behind it. Overall, this is a solid result, finishing in the top half of the pack in reads and second overall in writes. 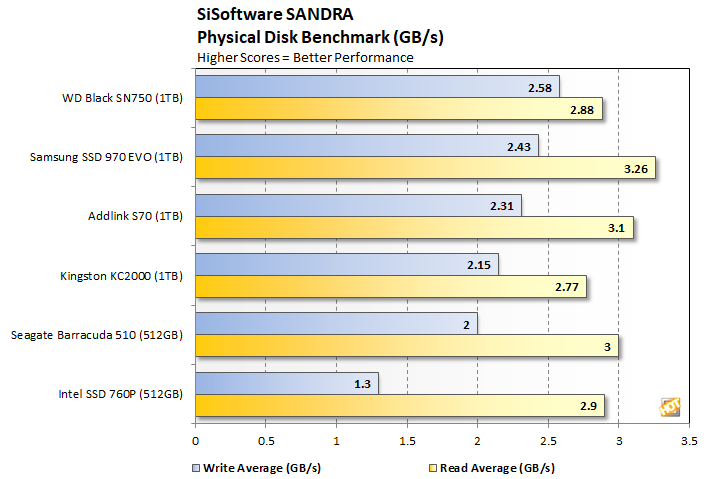 Just a few tests in, we're starting to see a trend already—Addlink's S70 turns in some pretty solid results, and finishes in the middle of the pack. Thanks to its relatively modest pricing, that's pretty good. In this case, it finds itself within arm's length of Samsung's much pricier 970 Evo for both reads and writes.


ATTO is another "quick and dirty" type of disk benchmark that measures transfer speeds across a specific volume length. It measures raw transfer rates for both reads and writes and graphs them out in an easily interpreted chart. We chose .5KB through 64MB transfer sizes and a queue depth of 6 over a total max volume length of 256MB. ATTO's workloads are sequential in nature and measure raw bandwidth, rather than I/O response time, access latency, etc. 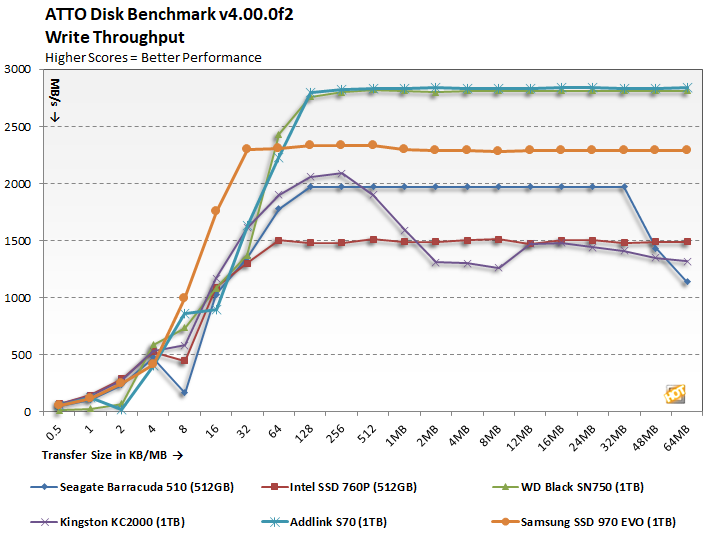 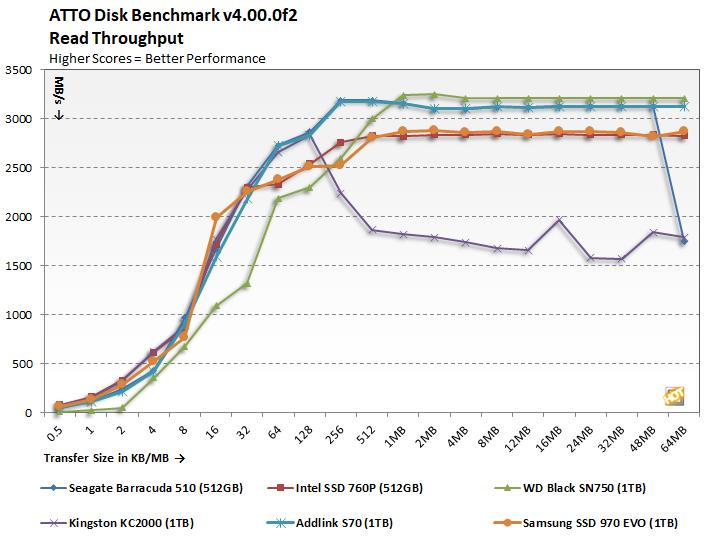 In ATTO's read and write tests, the Addlink S70 is among the highest-performing drives throughout. Once the drive hits a 256 kB block size, writes level out at around 2.8 GB per second. Meanwhile, reads hit 3.1 GB/s at the 128 kB level and never look back.