Addlink isn't a particularly well-known manufacturer in the PC storage space, but the company has been in the business for a little over a decade. Online shops carry all sorts of flash memory products from Addlink, from micro SD cards to PCI-Express 4.0 solid state drives, and all points in between. However, just because you may not be as familiar with a certain brand or product doesn't mean it's not worth paying attention to. At the risk of giving away the conclusion in the first paragraph of this review, we dare say that Addlink's S70 M.2 SSD is one of those situations.

As you'll see in the features and specifications list below, the S70 targets some pretty lofty theoretical figures for a drive priced just under $120 for 1 TB. For instance, Samsung rates the 970 EVO Plus for very similar IOPS and read/write speeds, yet commands an additional 50% price premium for its high-performance M.2 drive. Now, specs aren't everything, and we've got plenty of tests to look through, so let's not get too far ahead of ourselves here. Since the drive rings up at a an affordable price, you won't get a fancy heatsink bundled with this drive, but users who want one can get one for not a whole lot of money, and many motherboards come with them standard these days.

Let's see what this PCIe 3.0 NVMe drive has under its sticker before diving into the numbers...


Find The Addlink S70 @ Amazon.com
Like just about every other NVMe solid state drive for the DIY market, Addlink's S70 comes in an M.2 2280 package, which measures 22 millimeters wide by 80 millimeters long. Most of the laptops we've looked at lately—such as Lenovo's ThinkPad X1 Extreme—have an M.2 slot that can swallow this gumstick, and just about every modern desktop motherboard these days has at least pair of slots that will fit this drive just fine. The drive has a nice, understated label on the outward-facing surface and a smaller sticker on the backside. 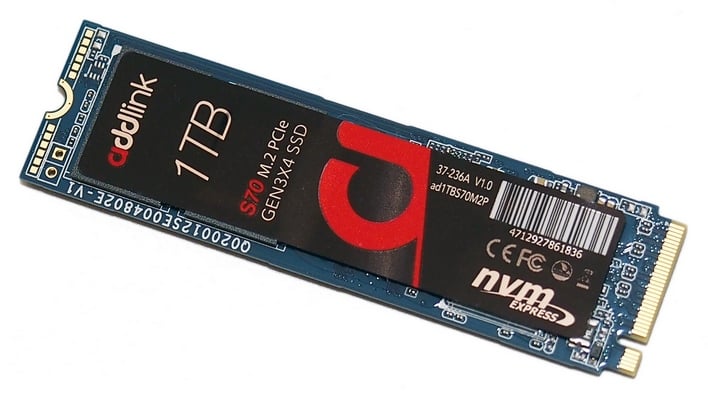 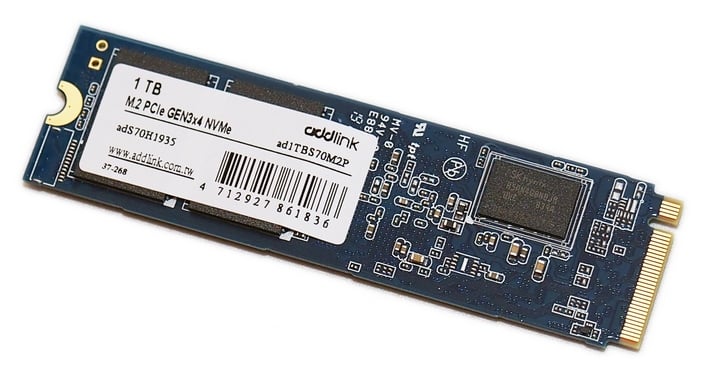 Addlink tapped Phison's E12 controller with support for AES 256 encryption to drive the S70. A 512 MB DDR3L cache made by SK Hynix is clearly visible on the bottom surface to buffer write operations. Some lower-priced SSDs skip the DRAM cache, but a high performance drive will benefit from it, particularly to speed up a burst of writes. The DRAM cache likely explains why the S70's write IOPS rating is higher than the reads, in fact. For permanent storage, the S70 has 1 terabyte of Toshiba 64-layer 3D BiCS TLC NAND, which is a more mature product than Toshiba's newer 96-layer flash. 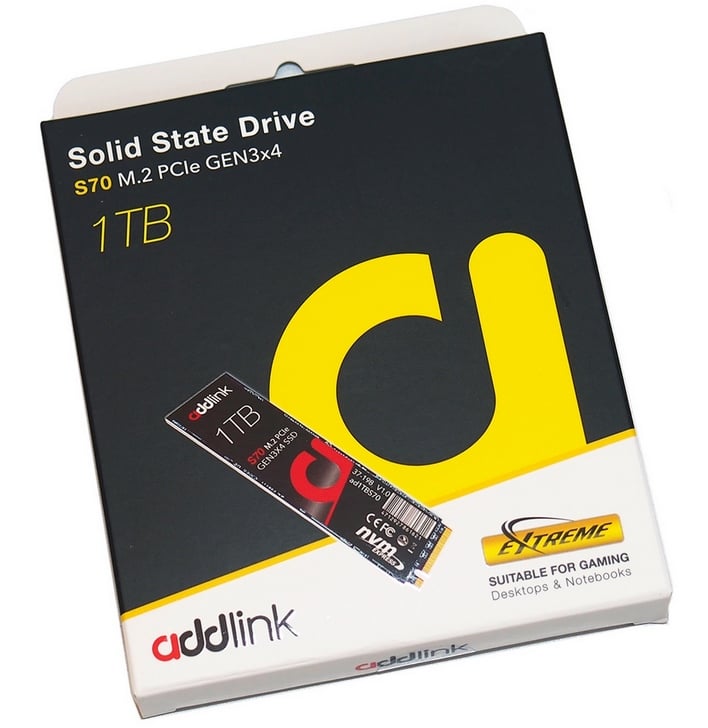 High performance in a SSD requires enough NAND to leverage all of the controller's channels. The smaller capacities don't quite have enough physical NAND packages to keep the Phison E12's eight channels busy at all times. As a result, Addlink says the 256 and 512 GB models have somewhat lower performance. However, the 1 TB drive we have here should be plenty to keep the controller's hands full when necessary.

More impressive is the rating for lifetime total number of bytes written. The 256 GB model can sustain 350 TB of writes before it gives up the ghost, all the way up to 2 petabytes for the 2 TB drive. That's right around twice as many total bytes written as Samsung advertises for the 970 EVO Plus, for example. While that may pale in comparison to the SLC and MLC drives of yore, the S70 should be plenty durable as a boot drive for quite a while. To back up that claim, Addlink endowed the S70 with a five-year warranty.

All of these specs don't mean much if the drive doesn't deliver, though. Let's see if the drive can put up the numbers to back up Addlink's claims...
NEXT PAGE