ADATA has been consistently expanding its line-up of XPG, or Xtreme Performance Gaming branded hardware, targeting PC enthusiasts and gamers. The XPG family now consists of everything from micoSDXC cards all the way on up to full gaming systems and notebooks. XPG's SSDs (Solid State Drives), however, are arguably the most extensive array of products in the company's portfolio. ADATA has a myriad of XPG SSDs available, at a wide variety of price points and performance levels. The two drives we’ll be showing you here today, the new ADATA XPG GAMMIX S70 and XPG GAMMIX S50 Lite, are both bleeding-edge PCI Express 4.0 NVMe drives, packing some of Micron’s latest TLC NAND.

The ADATA XPG GAMMIX S70 and XPG GAMMIX S50 Lite are two very different drives, however. Though they both offer strong performance at their respective price points and, as you’ll see in just a moment, the two drives target different segments of the market. XPG's GAMMIX S70 specifications foreshadow one of the fastest SSDs currently available, while the GAMMIX S50 Lite is a bit tamer and more budget-friendly. Take a look for yourselves...

Find ADATA XPG GAMMIX S70 And GAMMIX S50 Lite SSDs @ Amazon
Like the vast majority of M.2 drives currently on the market, ADATA's XPG GAMMIX S70 and XPG GAMMIX S50 Lite use the common M.2 2280 (80mm) "gumstick" form factor. ADATA utilizes dark-colored PCBs with the drives, and populates both sides of the boards with an array of components, but everything is covered by integrated heat-spreaders or heatsinks and decals.

At the heart of the ADATA XPG GAMMIX S70 is a new 8-channel InnoGrit IG5236 controller. In fact, this is the first SSD we have seen featuring the InnoGrit IG5236. That controller is paired to Micron's latest 96-Layer TLC NAND Flash memory and a few pieces of DDR4 DRAM cache memory. The drive features a PCIe Gen 4 x4 interface and support for the NVMe 1.4 specification.

The ADATA XPG GAMMIX S50 Lite features the same 96-Layer Micron NAND as the GAMMIX S70, and it too has a PCIe Gen 4 x4 interface, but this drive is built around the more affordable Silicon Motion SM2267EN controller. 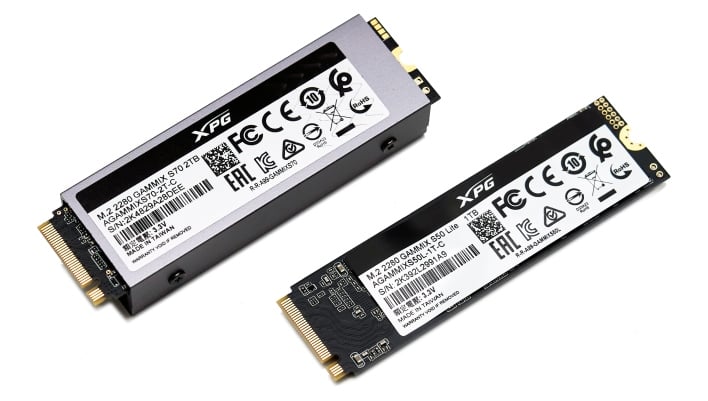 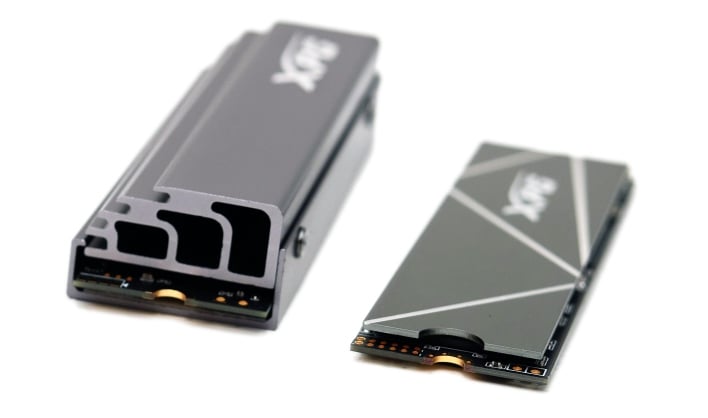 Due to its leading-edge controller and high-performance levels, the XPG GAMMIX S70 features a relatively large heatsink, that wraps around the entire drive. The GAMMIX S50 Lite features a much more common, flat, thin, metal heat spreader. And that heatsink on the GAMMIX S70 isn’t just for show. During testing, we saw drive temps reach about 60°C under long sustained loads, when benchmarking the drive inside our test-bed’s mid-tower chassis. Surface temps on the heatsink get pretty toasty too – reaching over 113°F / 45°C, so it's paramount that this drive is installed in systems with adequate cooling to prevent throttling. 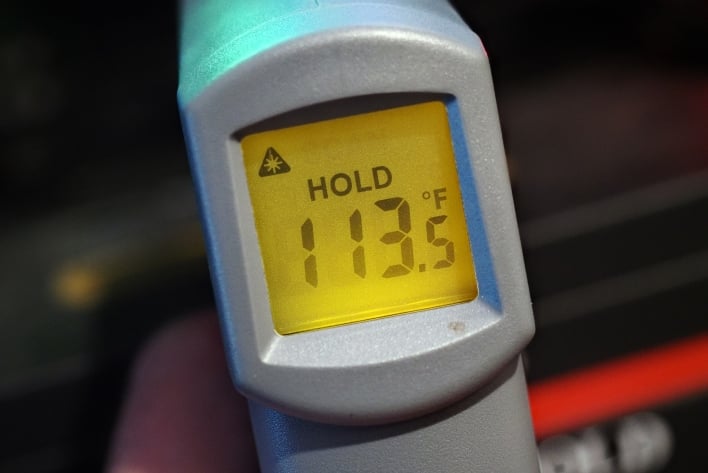 We should also mention that the XPG GAMMIX S70’s heatsink may preclude it from fitting in some systems. If your motherboard has especially thick thermal pads or protruding M.2 2260 / 2240 mounts, they may prevent the S70 from seating properly in the slot. 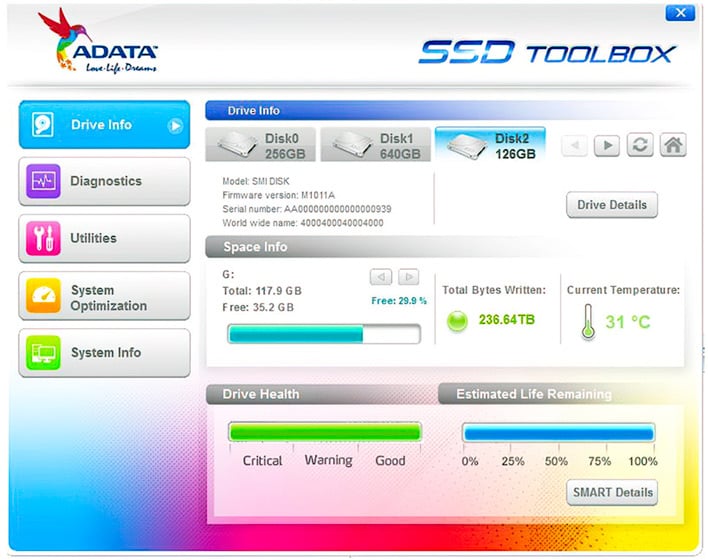 Included with the ADATA XPG GAMMIX S70 and XPG GAMMIX S50 Lite is support for the company’s SSD Toolbox utility, for monitoring, maintaining, and updating the drive. The interface for the tool is somewhat colorful and dated looking, but the functionality and feature set is adequate. ADATA also includes a copy of Acronis True Image with the drives. Both utilities are available to download from ADATA’s site.

While we're on the subject of downloads, both of these drives have updated firmwares available that improve performance significantly. Should you purchase either drive, before migrating or loading the drives up with data, we strongly recommend grabbing the latest firmwares and updating the drives to ensure they’re running tip-top. 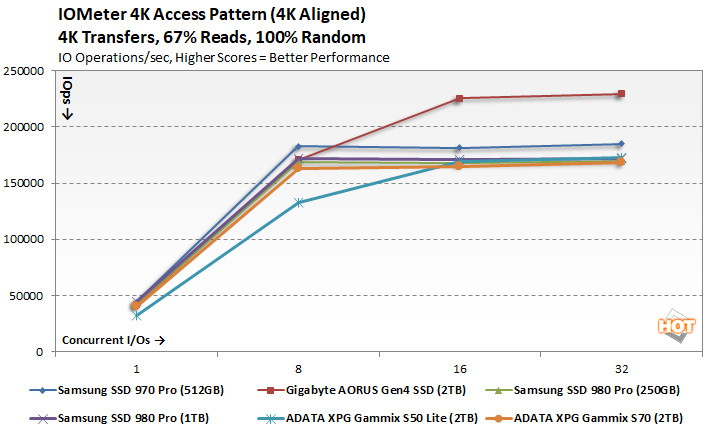 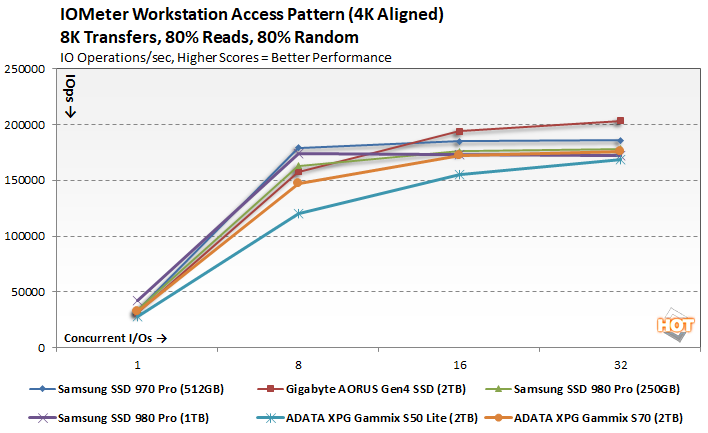 The ADATA XPG GAMMIX S50 Lite slightly trails the other drives we tested across the various queue depths, while the GAMMIX S70 is right in the mix with drives like the Samsung SSD 980 Pro and Phison-based Aorus Gen 4 SSD, at least with the workstation access pattern. With the fully random 4K access pattern, the Aorus Gen 4 SSD pulls ahead of the other drives at the higher queue depths. 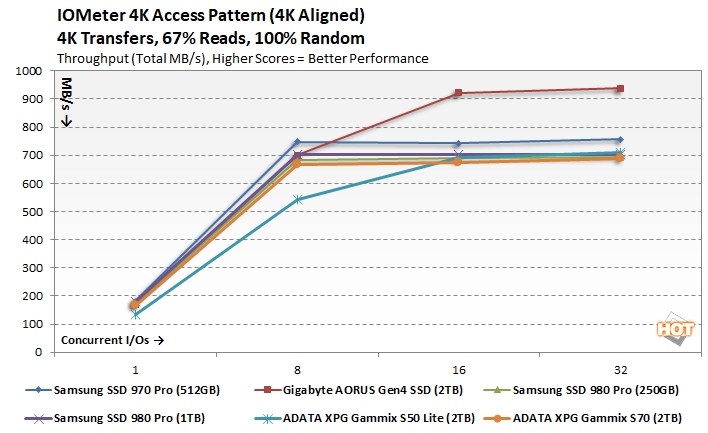 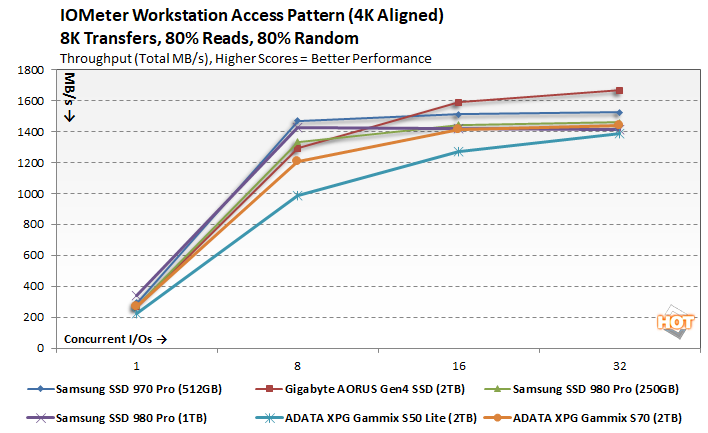 The actual bandwidth numbers are exactly in-line with the peak IOs in terms of the chart, but here you can see where the actual transfer speeds fall. 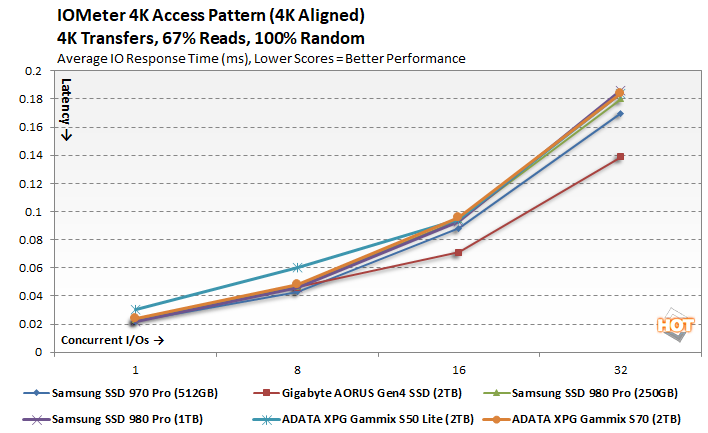 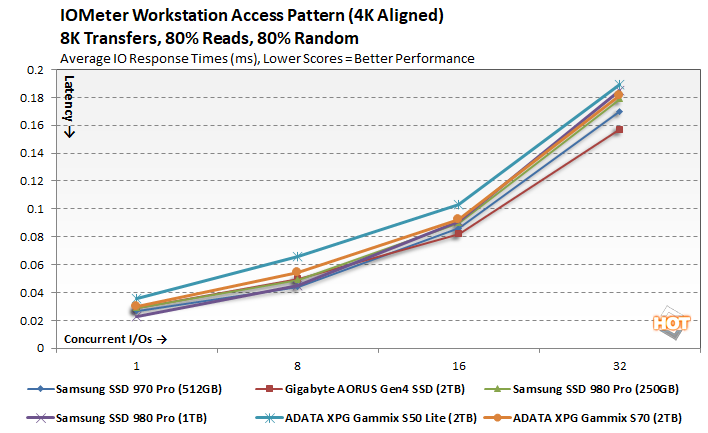 The latency characteristics for the drives we tested also show the XPG GAMMIX S50 Lite trailing the rest of the drives by a small margin, but the S70 is right there in mix. 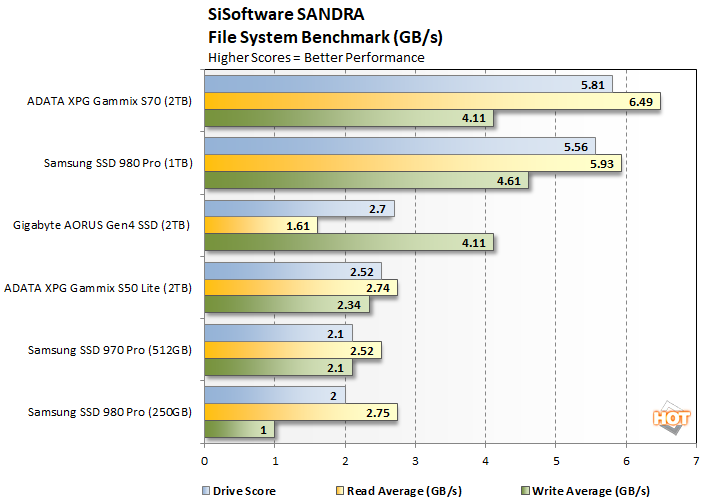 The ADATA XPG GAMMIX S70 took the top spot in this test, besting the Samsung SSD 980 Pro in the read test, but trailing slightly in writes. Still, overall the S70 lands on the pole position. The S50 Lite also performed well, besting the excellent Samsung SSD 970 Pro across the board. 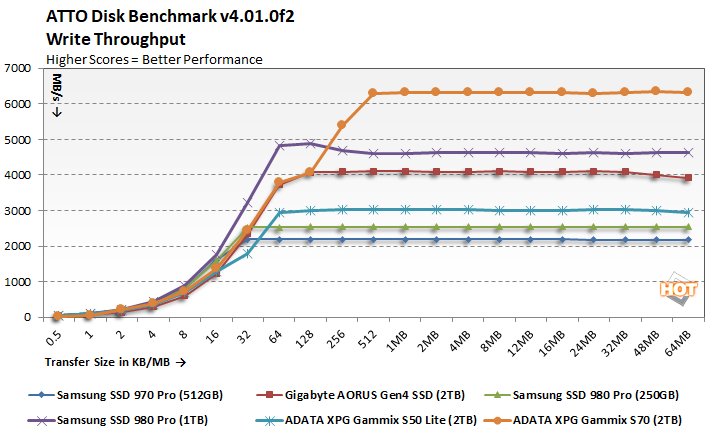 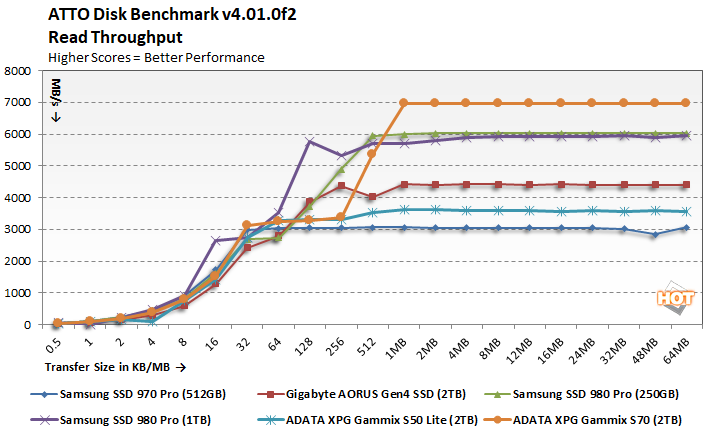 In ATTO's read and write bandwidth tests, the ADATA XPG GAMMIX S70 is a beast. The drive was right in the mix with the smallest transfer sizes, but it pulls ahead by a wide margin with the larger, sequential writes. The S50 Lite also performed relatively well, landing right in between the Samsung SSD 970 Pro and Aorus Gen4 SSD. 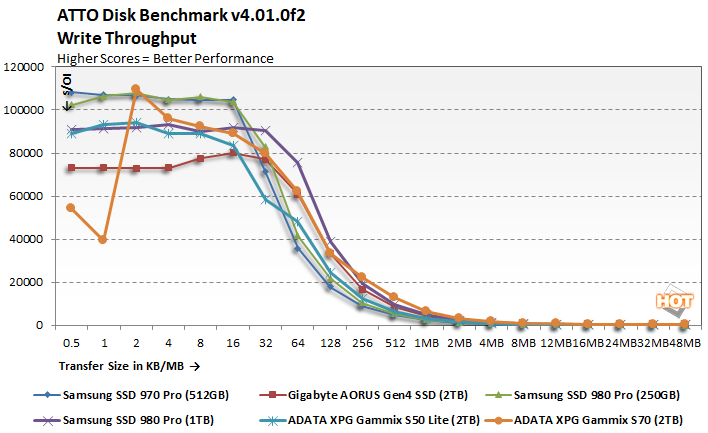 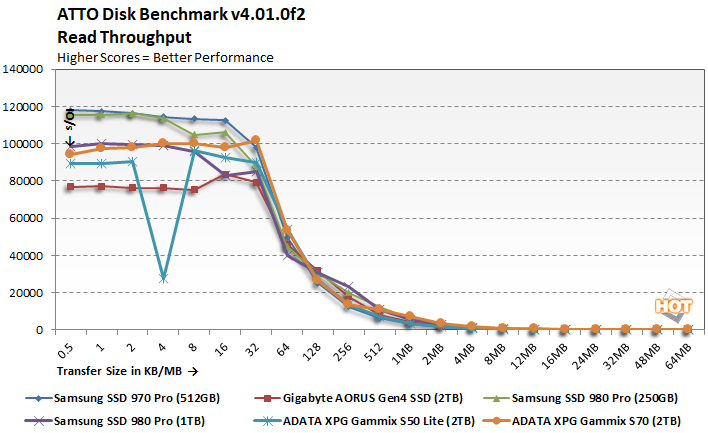 Both the ADATA XPG GAMMING S70 and S50 Lite consistently exhibited some wild swings in terms of their peak IOs, but disregarding the couple of anomalies, the drives land right about in the middle of the pack. 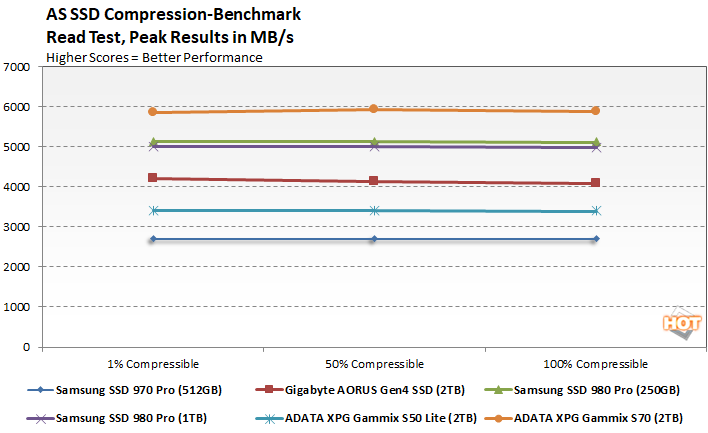 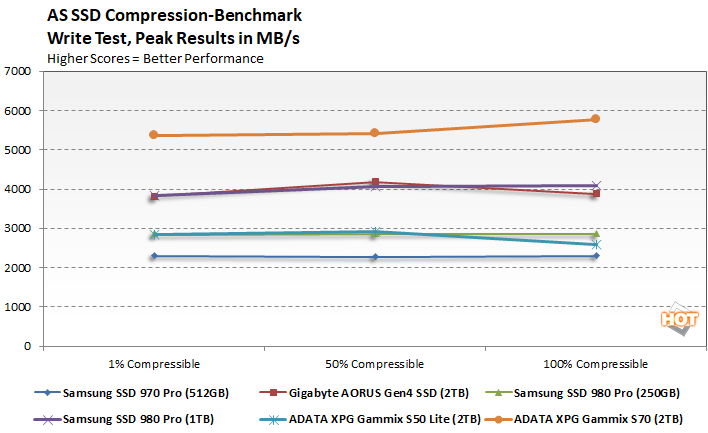 The compressibility of the data being transferred across the drives has minimal impact on performance in the read tests here, though there were some slight variations in the write tests. Overall, however, we see a similar performance trend as a couple of the previous tests, with the ADATA XPG GAMMIX S70 leading the pack and the S50 Lite landing somewhere in between the Samsung SSD 970 Pro and Gigabyte Aorus Gen4 SSD.