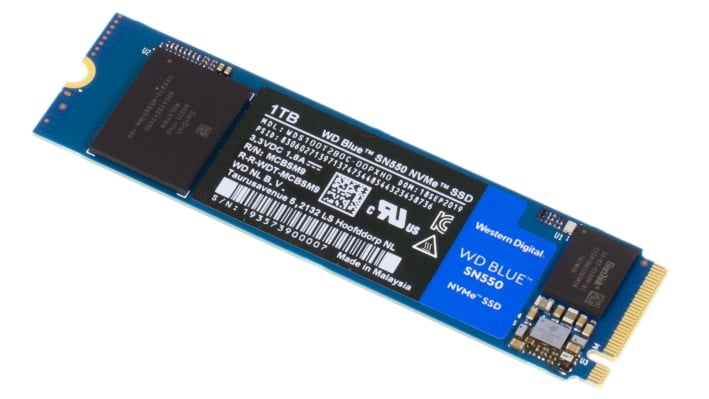 Spinning hard disks are completely out for just about all but the very cheapest of systems. Solid state drives like the WD Blue SN550 we'll be evaluating in this article are here to stay, and continue to make their way into lower-priced, ever more affordable notebooks and desktops. That's no doubt due to the fact that these drives' asking prices have consistently dropped year over year. In 2020, there hasn't been much good news on the affordable, widely-available PC hardware front, but SSD availability has been one bright spot. There's never been a better time to grab an SSD to speed up any PC still chugging along with magnetic media.

Western Digital isn't a newcomer to solid state storage, either. The company acquired flash memory maker SanDisk back in 2015, and it wasn't too long afterward that WD-branded SSDs appeared. At first, the company stuck to high-end drives, but with demand for cheaper alternatives increasing, the company started expanding its offerings.

Much like the company's consumer hard drive offerings, WD divides its portfolio of solid state products into multiple families: Black, Blue, and Green. Black is reserved for the highest performance drives, and the WD Black SN750 is a great example of what the company is capable of producing. WD Green SSDs are mostly 2.5" drives, but the occasional M.2 AHCI (SATA) SSD has also made its way into the wild. It's in the middle where we find ourselves today, as we look at WD's Blue SN550 NVMe SSD...

WD makes a total of four different drives in the Blue SN550 family, and each step up the ladder has twice the capacity of its smaller sibling. There are 250 GB, 500 GB, 1 TB, and 2 TB models. Along with increased capacity, WD also lists increased performance for each higher capacity. We're looking at the 1 TB drive, which is among the quickest -- the 2 TB drive is more about added capacity than added performance.

Unlike the WD Black SN750, the Blue SN550 does not have a heatsink, or even heat-conductive tape. There's just a label on the drive that doesn't even cover the controller or the flash memory. Despite that, temperatures never got out of hand. Two passes through HD Tune Pro's read test followed by two passes of the write test showed no performance deterioration, and according to HWMonitor, temperatures hit only 60 degrees Celsius at the end of the run. It might have been nice to get a little flat heat spreader to keep temperatures a little lower, but it seems by no means required, especially since many motherboards now include them.

The WD Blue SN550 uses SanDisk branded 96L BiCS4 TLC NAND flash in a single package containing 16 512-gigabit dies. The NAND is in the large chip towards the screw end of the typically-sized 2280 M.2 gumstick. The drive looks a little sparse, since there's so much space between the controller and the flash. Separating the components by placing more than an inch between them no doubt helps the drive avoid throttling due to heat.

On the other end is the controller, labeled SanDisk 20-82-01008-A1. This is WD's in-house design, and it connects to the PC over PCI-Express 3.0 with four lanes of connectivity. That's all pretty common for midrange and budget-priced SSDs. Unlike the WD Black series, the Blue SN550 does not have a DRAM cache, instead opting to use a portion of its 1 TB of flash memory as an SLC cache.

In terms of its rated specs, WD rates the Blue SN550 about where you'd expect. Read throughput should hit around 2,400 MB per second, while sequential writes are a bit lower at 1,950 MB/sec. This compares very favorably to two other budget drives in our test cohort, AData's Swordfish and Falcon. Technically, the Blue SN550 should be about 50% faster in both reads and writes than the Swordfish, which currently goes for roughly the same $95-$100 as this WD Blue drive. It also boasts higher read throughput than the Falcon, which typically goes for around $10 more.

For random performance, WD rates the Blue SN550 at 410k IOPS for reads and 405k IOPS for writes. We expect that these figures are absolute theoretical maximum IOPS under ideal conditions. If this drive comes anywhere close to that in our tests, it would hit the top of our charts with a ridiculous lead. We expect that performance won't be too out of line with our similarly-priced AData competitors, though.

The one slight disappointment is that the Blue SN550 does not natively support AES-256 encryption, which takes it out of the running for enterprise drives and would have to rely on the CPU to keep its data safe. The rest of the Blue's specs don't seem out of line for its price though. Its TBW endurance rating of 600 terabytes is a bit lower than the AData drives, but we think that by the time most users actually write 600 TB to one of these, the world would have long since passed the host PC by. Despite that lower figure, WD backs the Blue SN550 with a five-year warranty. 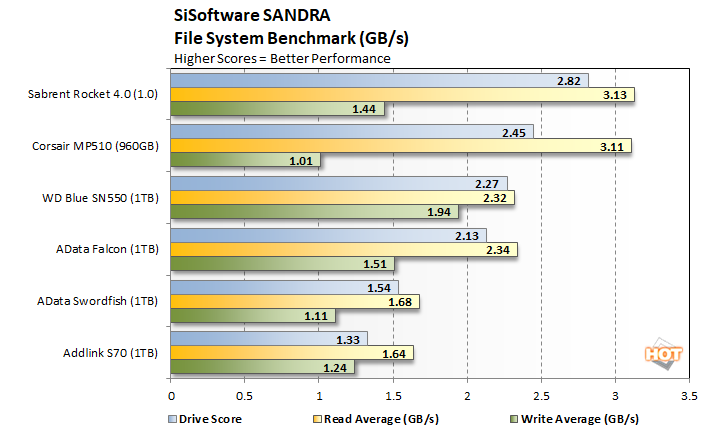 The WD Blue SN550 lands right about n the middle of pack due its overall drive score and read average. The WD drive's average writes, however, were the best of the bunch. 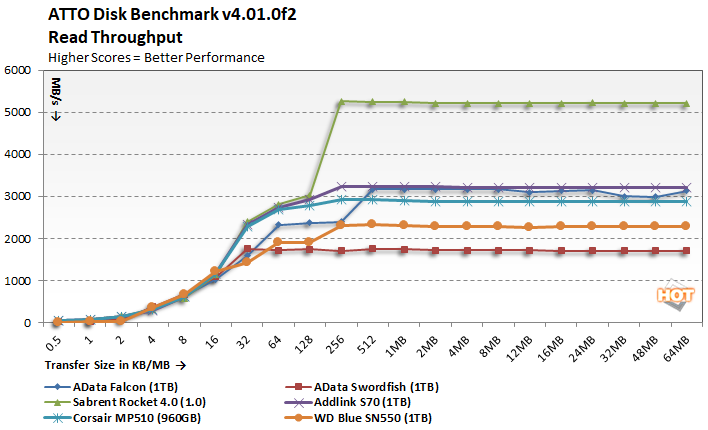 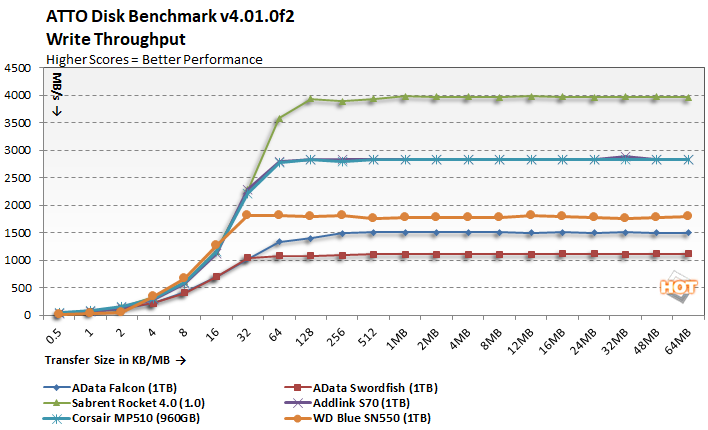 These bandwidth results are pretty solid, if not totally exciting. The budget-priced, DRAM-less WD Blue SN550 outpaced its chief competition in the form of AData's Swordfish in both the read and write tests, but also outstripped AData's slightly more expensive Falcon in write bandwidth. Surely that's a result of using the onboard Sandisk NAND as an SLC cache when possible. Both tests showed this drive to be a ways off of the nearly 3 GB per second of the more mid-tier Addlink S70 and Corsair MP510. And of course, the extra bandwidth afforded by higher-end (and pricier) PCI Express 4.0 gave the PCIe 4.0 Sabrent drive plenty of room to stretch its legs. 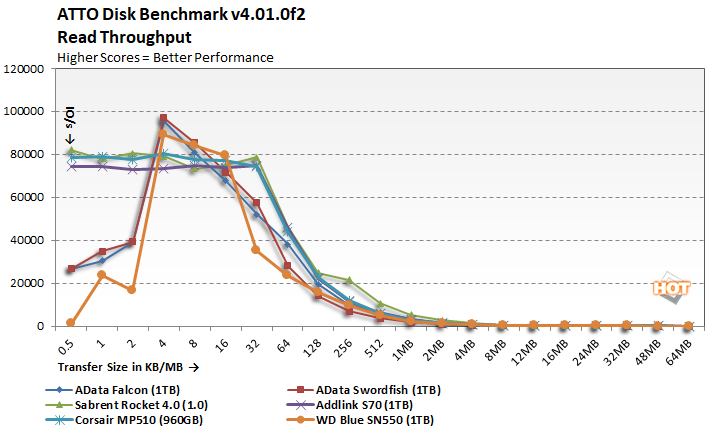 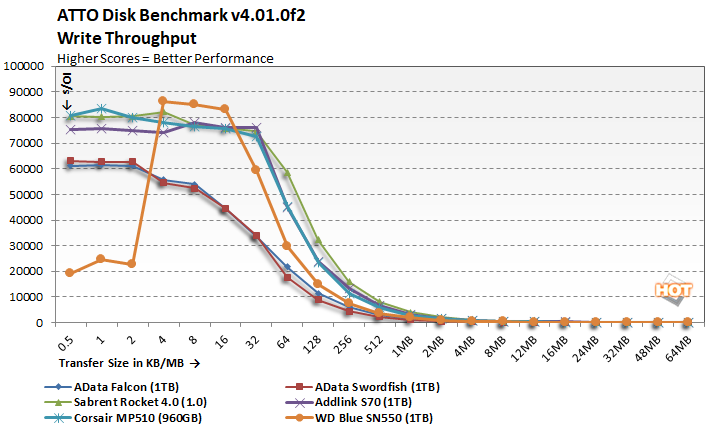 The IO graphs area  little weird for the WD Blue. Both read and write IOs were very slow at the smallest transaction sizes, but jumped up to about what we'd expect at the 4k mark. Since modern file systems tend to allocate 4k clusters, this is likely not a big deal in day-to-day operation. The smallest writes were faster than the reads by a significant margin at the 512 byte level. That's probably got more to do with writes being cached in the SLC-like buffer that WD's controller allocates more than anything. Once we hit the 4k level, it mirrored the AData drives, which scored the best on 4k IO transactions by a bit. WD says its controller is an in-house design, but it seems to have more than a little behavior in common with the Realtek controller on the AData drives. 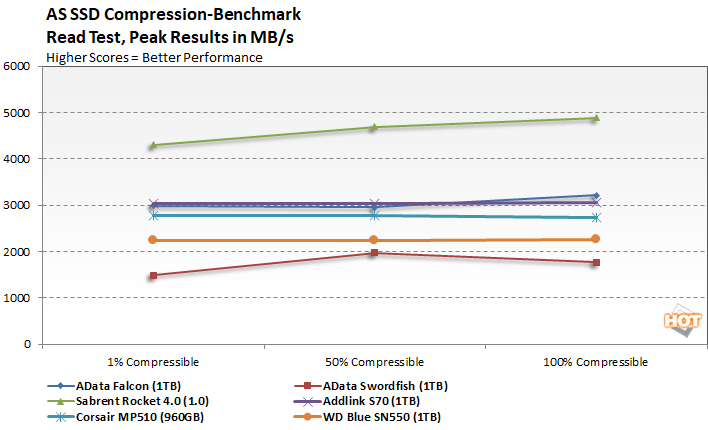 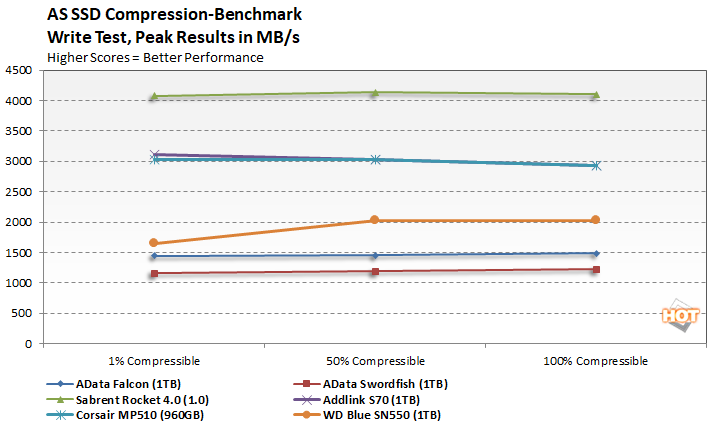 Data compressibility didn't really have much effect on the WD Blue SN550's read and write speeds. They're much higher than the AData Swordfish across the board, something that (spoiler alert) will happen frequently across the rest of our test suite, as well. It also enjoyed higher compressed data write throughput as well. It's still a long ways to catch the mid-tier and high-end drives in our showdown, which shows what a few extra dollars can buy compared to the absolute rock-bottom prices of budget SSDs.

Next up, we'll see a few more tests and also render our verdict in the conclusions of this review...
NEXT PAGE