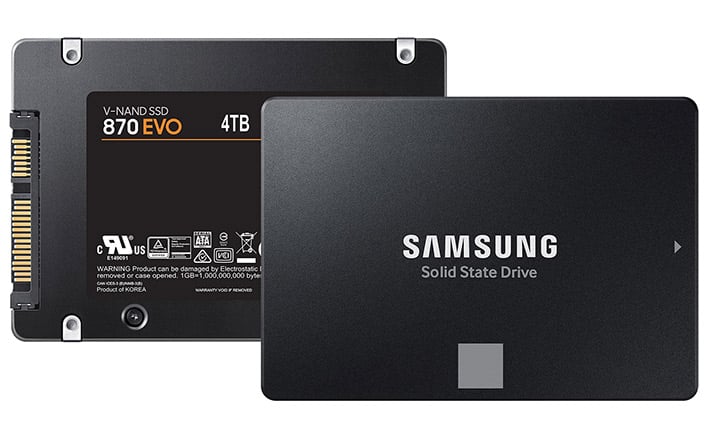 Samsung is expanding their line-up of SATA-based solid state drives, with a new series of products designed to balance performance and capacity. A few months back, the company launched the SSD 870 QVO series of drives, based on QLC, or quad-level cell, V-NAND. These new Samsung drives launching today – the Samsung SSD 870 EVO series – are similar in many regards, but EVO SSDs feature Samsung’s latest TLC (triple level cell) V-NAND, with the commensurate firmware to match.

These new TLC-based drives also offer slightly higher performance than their QLC-based predecessors, with longer warranties and better endurance ratings as well. Take a look at the Samsung SSD 870 EVO series’ full list of features of specifications below, and then we’ll dig in a bit further on the particulars and look at performance... 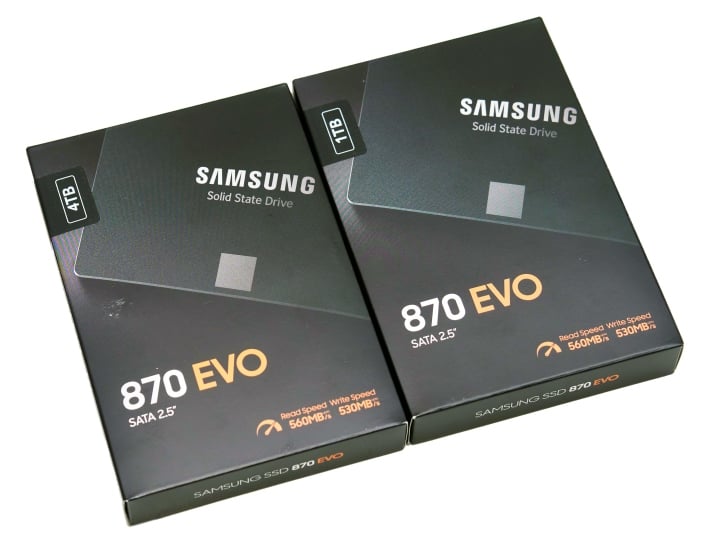 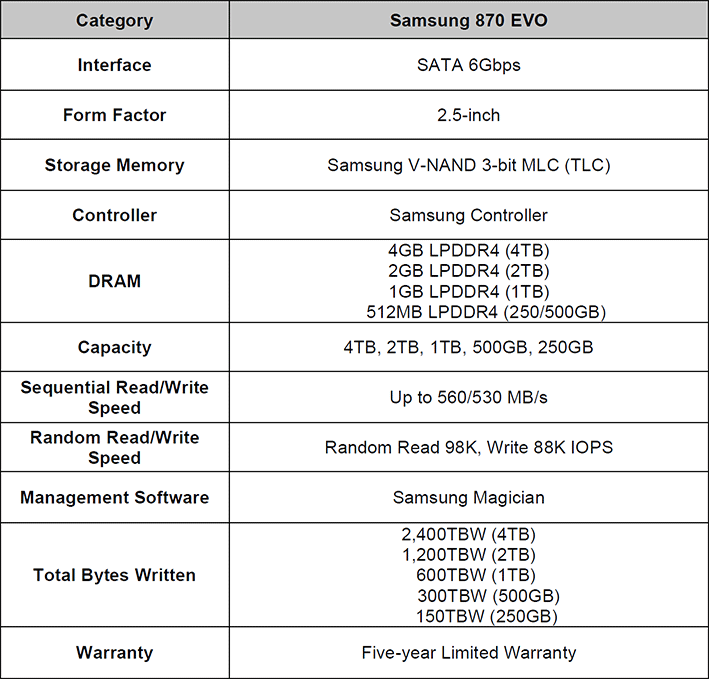 Find Samsung SSD 870 EVO Solid State Drives @ Amazon
The Samsung SSD 870 EVO series of drives are built around the company's latest 100+-layer, 3-bit per cell TLC (triple level cell) V-NAND. That NAND is paired to a proprietary Samsung MKX controller and some LPDDR4 DRAM cache. Details are scarce on the controller itself, but the amount of DRAM installed on each drive is listed right in their specs – there is essentially 1GB of DRAM per 1TB of drive capacity. 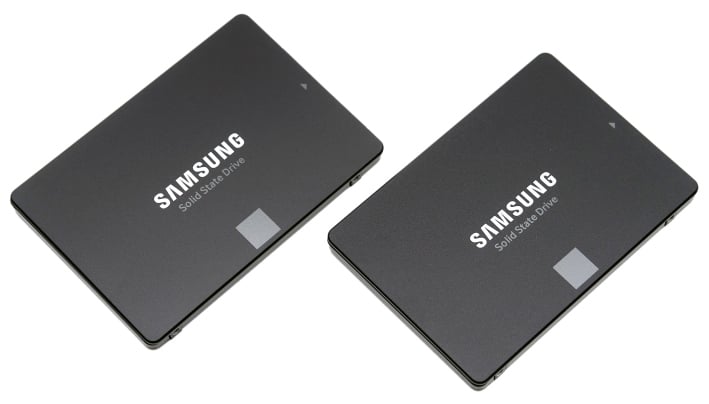 All of the drives in the family, which will range from 250GB on up to 4TB, are rated for 560MB/s reads with 530MB/s writes, with 98K / 88K read / write random IOPS, which is about as fast as the SATA interface can handle. Endurance / TBW is class-leading with these drives as well. Samsung rates the 4TB model at 2,400TB, or 600x the total capacity. And all of the drives carry a solid 5-year limited warranty. 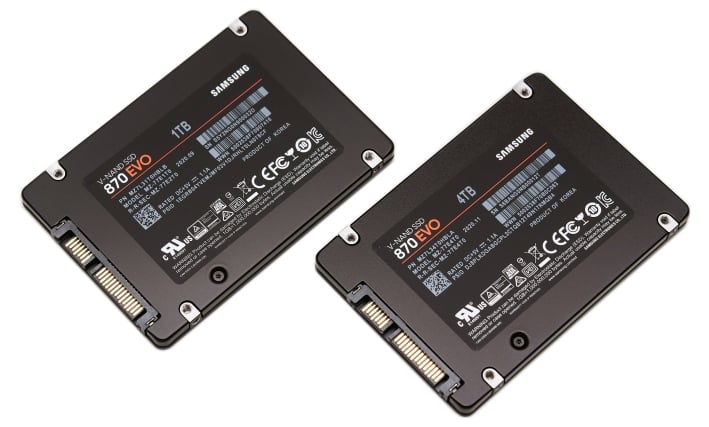 Externally, Samsung continues with their traditional design aesthetic. The SSD870 EVO series drives are the usual 2.5” 7mm form factor (as you would expect), with the top side of the drives emblazoned with Samsung branding and a sole, colored square. The bottom is home to a decal with all of the particulars, serial number info, etc.

Three pentalobe screws secure the enclosures together – one screw is visible and two reside under the decal. Disengage those screws and the enclosures pops right open to reveal the PCBs inside; there is no adhesive, thermal pads, or thermal interface material to speak of in these designs.

What you see pictured here are the internal PCBs of the 1TB and 4TB Samsung SSD 870 EVOs. As you can see, the PCBs are tiny, and fill only a small portion of the 2.5” enclosure. In total, there are only 4 chips inside the 1TB drive – the controller, one piece of DRAM, a microcontroller of some sort, and a single piece of NAND, in addition to some surface mounted components. The 4TB drive has a slightly larger PCB, with 4 pieces of NAND, two on the front, two on the back. 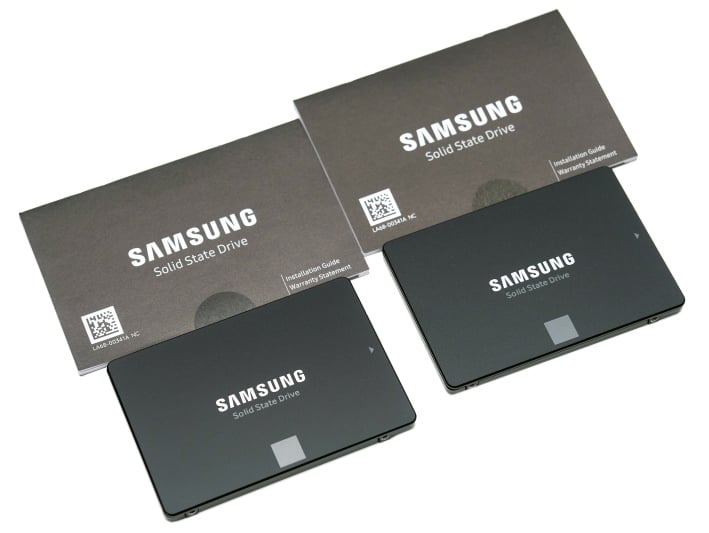 Like most previous-gen Samsung SSDs, the 870 EVOs use a portion of the NAND like a variable SLC write buffer. This allows the TLC NAND to perform more like an SLC drive for writes, giving write performance an overall boost. With previous-gen Samsung drives, we'd normally see performance drop off at some point when the buffer was exhausted, but both the 1TB and 4TB drives' variable buffers are large enough -- and flush data fast enough -- to maintain peak performance across the entire capacity. We should also mention that both drives support Samsung's latest data migration tools and Magician SSD utility as well, though the only thing included in the boxes are the drives and a basic lit pack.

Under each test condition, the SSDs tested here were installed as secondary volumes in our testbed, with a separate drive used for the OS and benchmark installations. Out testbed's motherboard was updated with the latest BIOS available at the time of publication. The SSDs were secure erased prior to testing (when applicable), and left blank without partitions for some tests, while others required them to be partitioned and formatted, as is the case with the ATTO, PCMark, and CrystalDiskMark tests. Windows firewall, automatic updates, and screen savers were all disabled before testing and Windows 10 Quiet Hours / Focus Assist was enabled. In all test runs, we rebooted the system, ensured all temp and prefetch data was purged, waited several minutes for drive activity to settle, and for the system to reach an idle state before invoking a test. 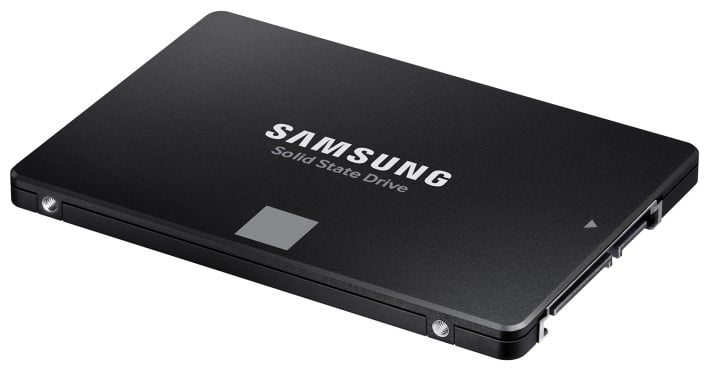 First up we have SiSoft SANDRA, the the System ANalyzer, Diagnostic and Reporting Assistant for some quick tests. Here, we used the File System Bandwidth test and provide the results from our comparison SSDs. Read and write performance metrics, along with the overall drive score, are detailed below. 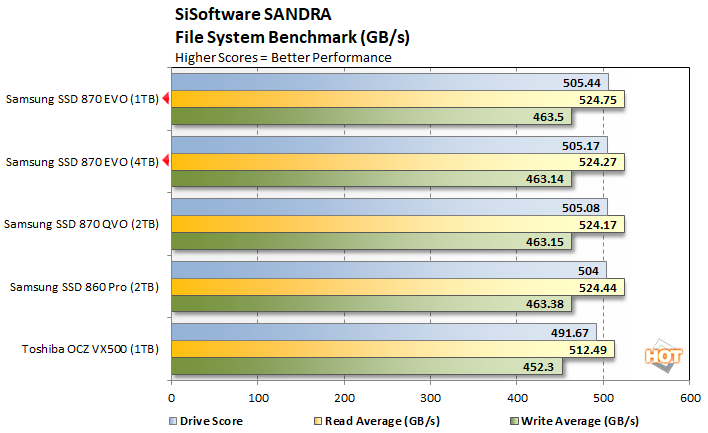 The new Samsung SSD 870 EVO drives technically led the pack overall, but we are talking about some miniscule performance deltas separating all of the Samsung drives here. The Toshiba drive is a couple of percentage points off the mark, but still competitive nonetheless.

ATTO is another "quick and dirty" type of disk benchmark that measures transfer speeds across a specific volume length. It measures raw transfer rates for both reads and writes and graphs them out in an easily interpreted chart. We chose .5KB through 64MB transfer sizes and a queue depth of 4 over a total max volume length of 256MB. ATTO's workloads are sequential in nature and measure raw bandwidth, rather than I/O response time, access latency, etc. 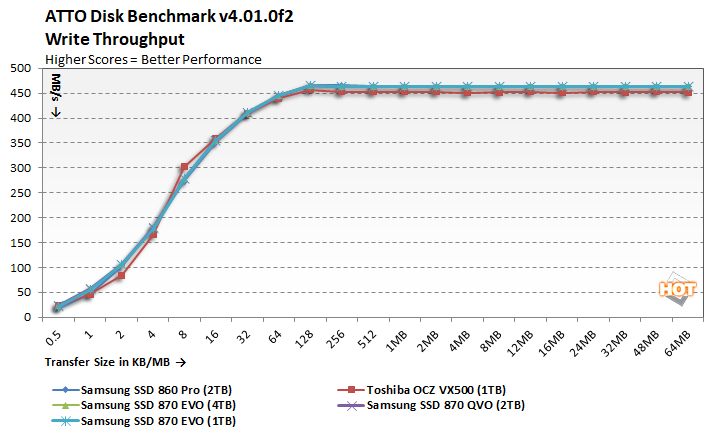 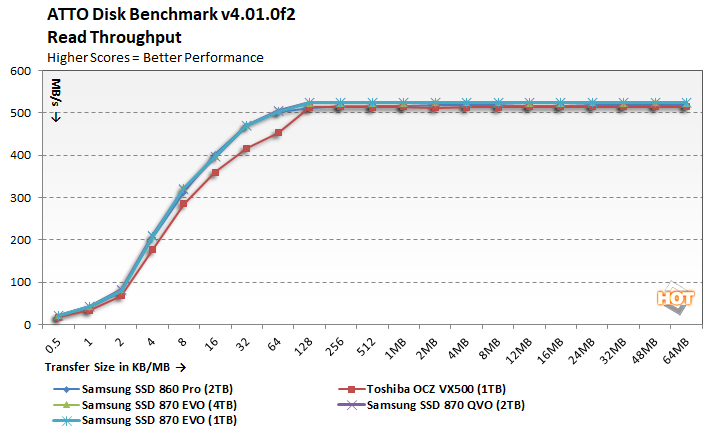 In ATTO's read and write bandwidth tests, the new Samsung SSD 870 EVO drives competed at the top of the charts, across the entire curve. The drives bump into the limits of the legacy SATA interface, however, as expected. 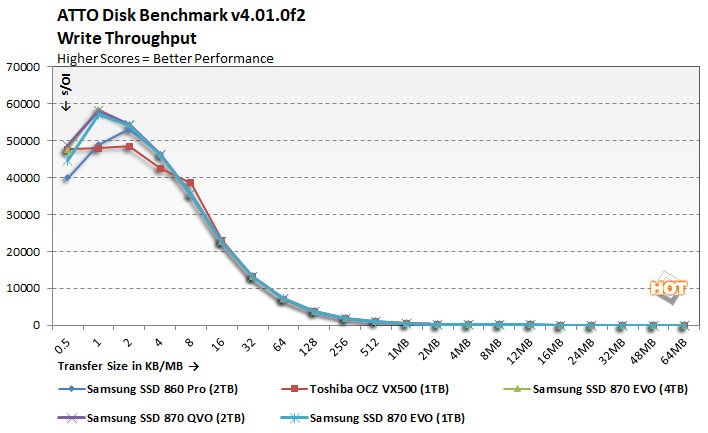 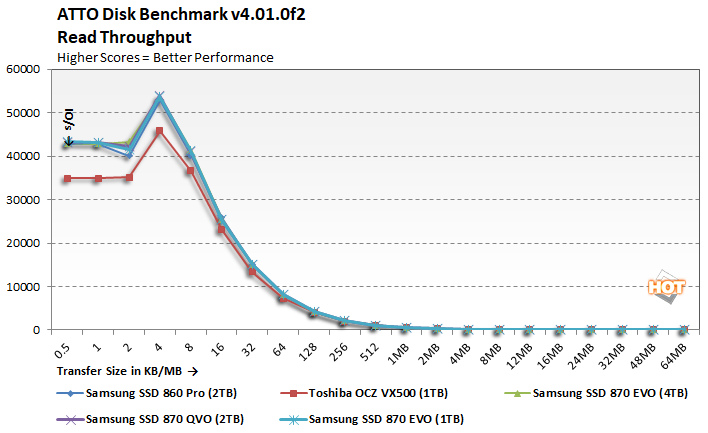 There's not much separating these SSDs in terms of IOs either. Save for the previous-gen Samsung SSD 860 Pro and OCZ drives, which trail slightly with the smallest transfer sizes, all of the Samsung drives once again perform similarly overall. 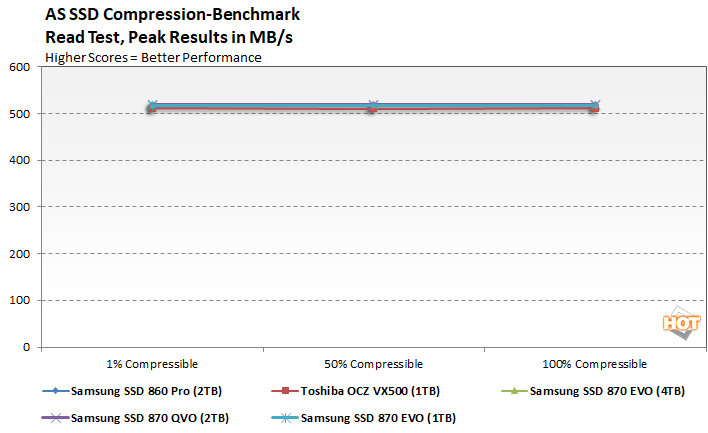 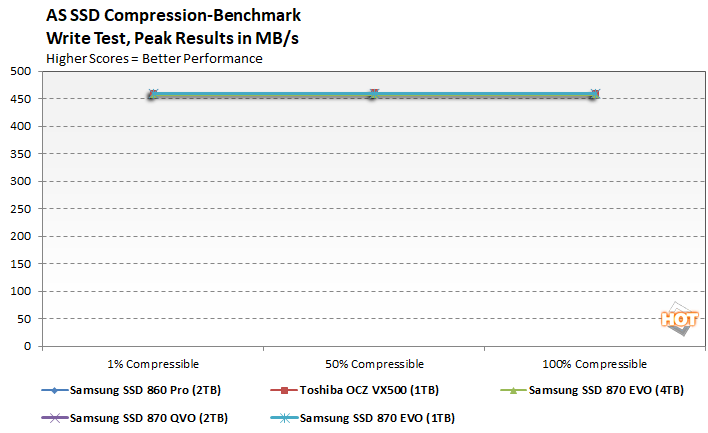 The compressibility of the data being transferred across the drives has no impact on performance and all of the drives put up numbers within a couple of megabytes per second. There's only so much headroom a modern SATA SSD has to play with.

There's no exceeding the limits of the interface in this test but there's nuance to the performance of these new Samsung SSDs, which you'll see next...