The NVMe M.2 solid state storage market continues to expand with an ever-increasing number of drives, at a variety of price points and performance targets. There has been a steady influx of high-end drives targeting enthusiasts, along with an array of more-affordable DRAM-less offerings specifically tuned for consumer and gaming workloads. The ADATA XPG Atom 50 we’ll be showing you here today falls into the latter category. The ADATA XPG Atom 50 is available for a relatively low price, yet packs some decent specifications, including a native PCIe Gen 4 interface and sequential transfers north of 5GB/s.

Take a look at the ADATA XPG Atom 50’s main features and specifications below. Then we’ll dig in with some benchmarks on the pages ahead to see how she performs, and if it’s worth springing for one of these more affordable solid state drives in light of the many other excellent offerings currently on the market... 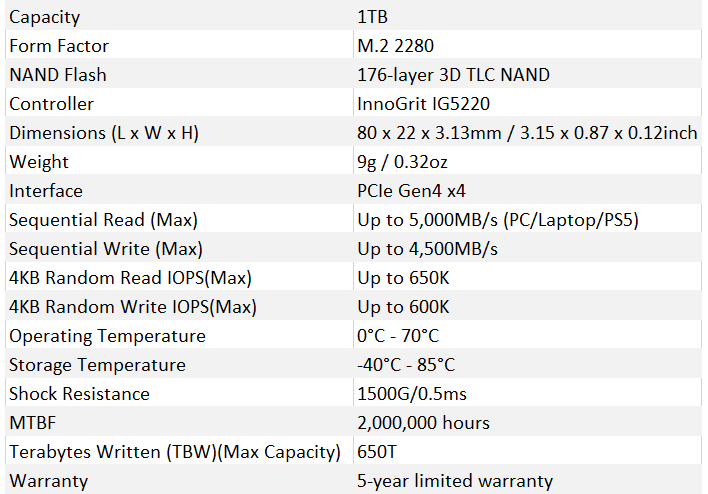 Find The ADATA XPG Atom 50 SSD @ Amazon
Just like most other M.2 drives currently on the market, the ADATA XPG Atom 50 SSD uses the common M.2 2280 (80mm) "gumstick" form factor. And like many of ADATA’s other XPG-branded SSDs, the Atom 50 utilizes an attractive, dark-colored PCB with components packing only one side of the board. One side is masked by a sticker and the other, while exposed right out of box, will be masked by the included heat-spreader or your motherboard’s integrated M.2 cooling hardware. 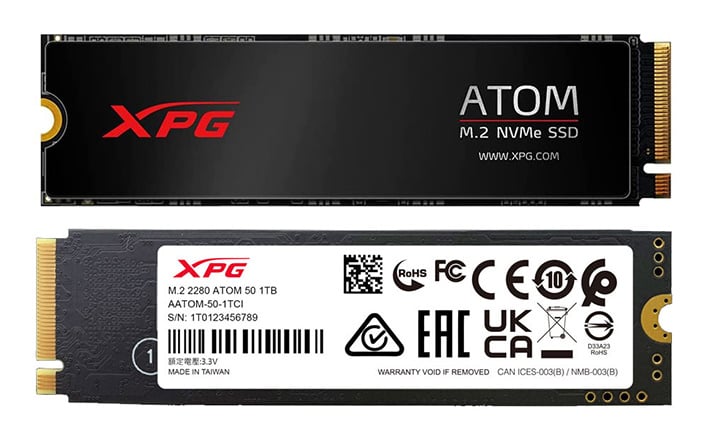 The ADATA XPG Atom 50’s sequential transfers are rated for up to 5GB/s per second reads and 4.5GB/s writes, respectively, when used with a PC, with up to 5GB/s transfers in a PS5. Because this drive packs only a basic, flat heat-spreader, its form factor is a perfect fit for a PlayStation 5 storage upgrade. This particular drive’s endurance rating is 650TBW, and it is currently offered only in a 1TB capacity. 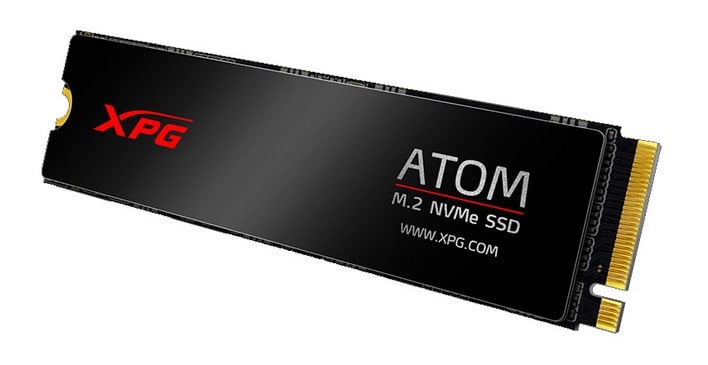 Included with the ADATA XPG Atom 50 is support for the company’s SSD Toolbox utility, for monitoring, maintaining, and updating the drive. The interface for the tool is somewhat colorful and dated looking, but the functionality and feature set is adequate. ADATA also includes an XPG-branded aluminum heat-spreader should users want to install it. We like this option because it allows owners to opt for the included heat-spreader should they want to use it or attach the beefier heatsinks included on many enthusiast motherboards directly to the SSD, without an additional layer in-between. 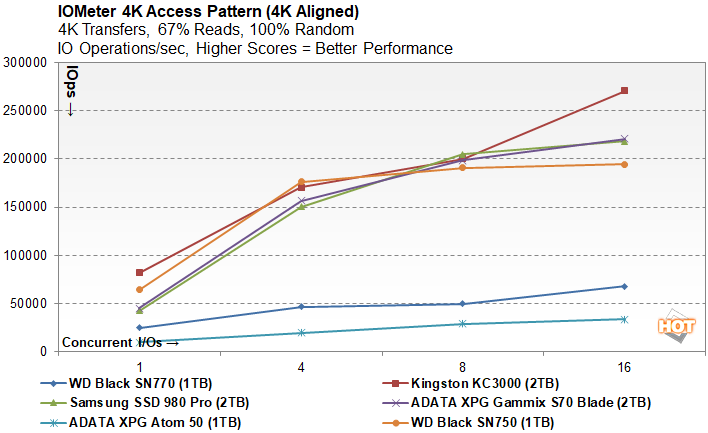 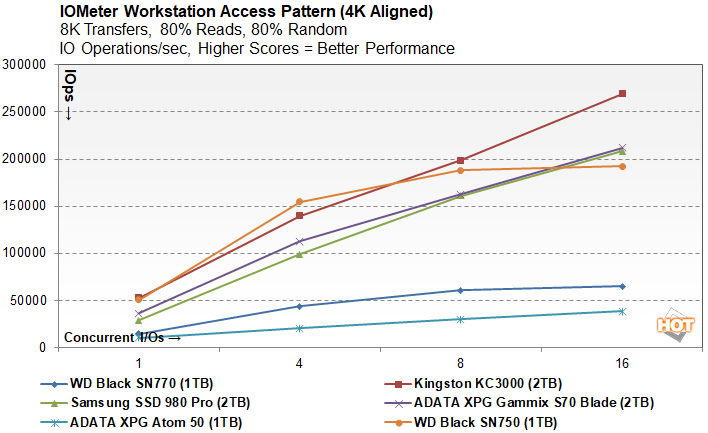 We've got a varied mix of drives here to illustrate the performance differences between older PCIe Gen 3 drives, higher-end Gen 4 drives, and DRAM-less drives. With this particular mix of competitors, the XPG Atom 50 ends up trailing the pack in terms of IOs, especially at the queue depth is increased.

These numbers represent the average bandwidth for the drives we tested with both access patterns, across every queue depth. With the lowest IOs of the bunch, it's no surprise than the XPG Atom 50 lands at the bottom of the charts here. 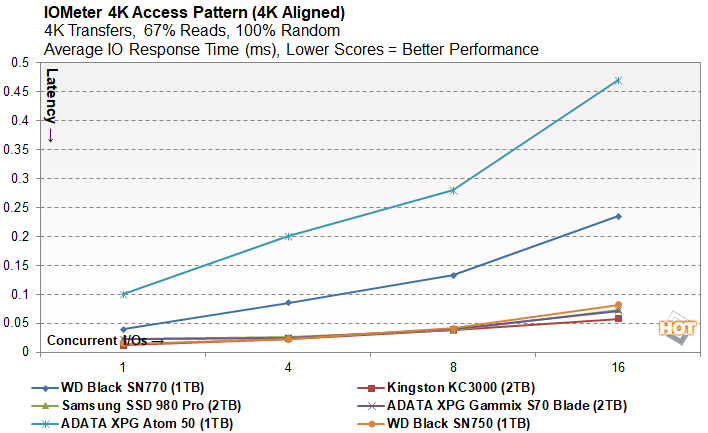 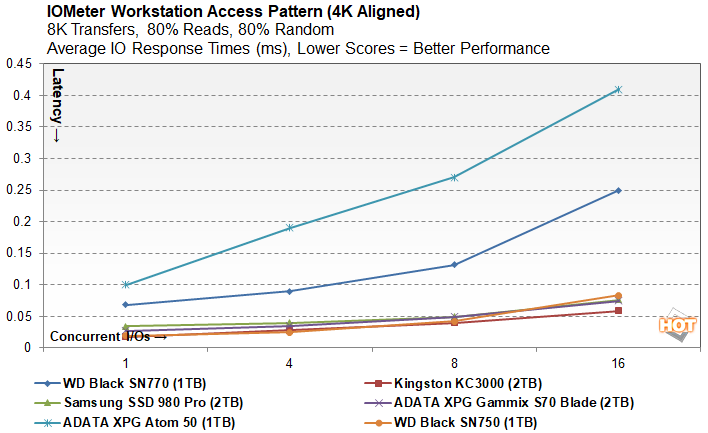 Our latency results also show the higher-end drives offering lower latencies across all queue depths. At QD1, which is most relevant to mainstream, consumer workloads, the deltas separating the drives are relatively small, but the XPG Atom 50 trails here nonetheless. 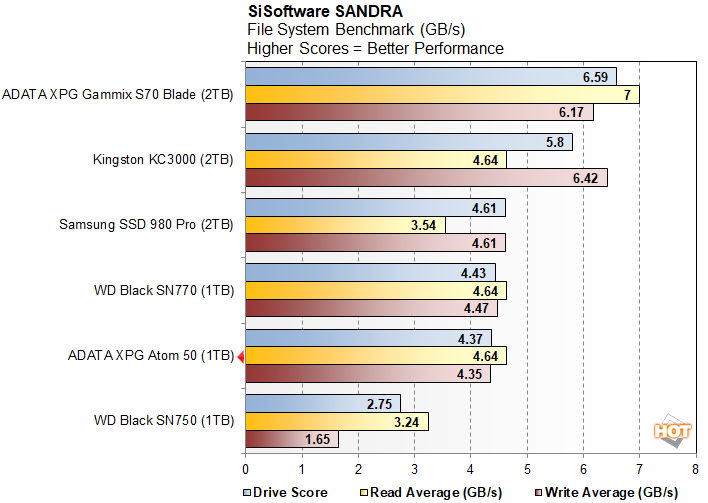 The SANDRA file system benchmark had the XPG Atom 50 clearly outrunning the PCIe Gen 3 WD Black SN750 performing similarly to the also-DRAM-less SN770, but the higher-end drives come out well ahead. 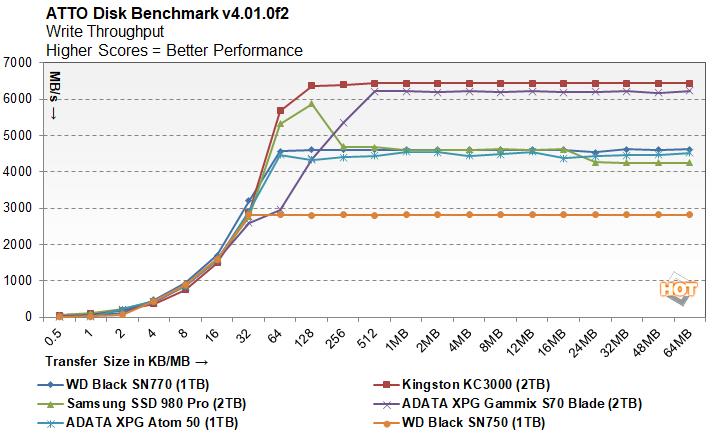 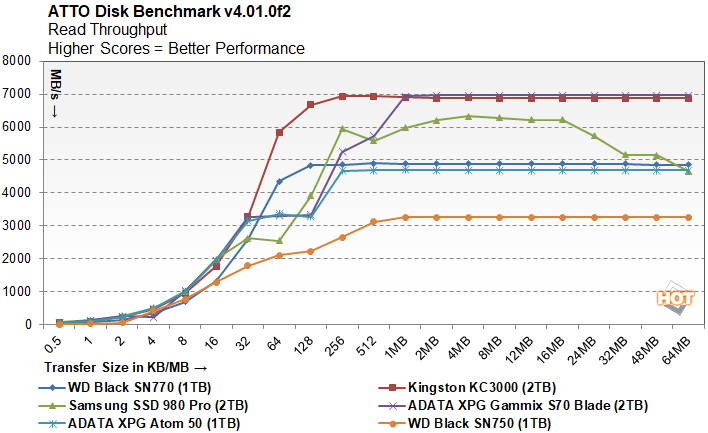 The XPG Atom 50 is rated for 5GB/s reads with 4.5GB/s writes. In ATTO's write test, the drive finishes right in-line with expectations and in the read tests is just barely missed hitting that 5GB/s mark. 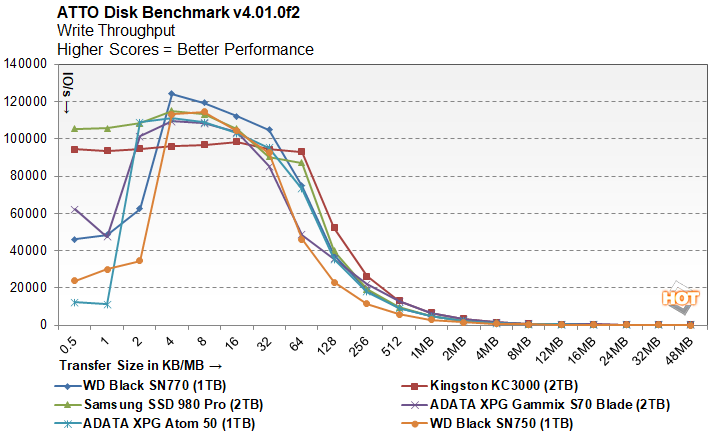 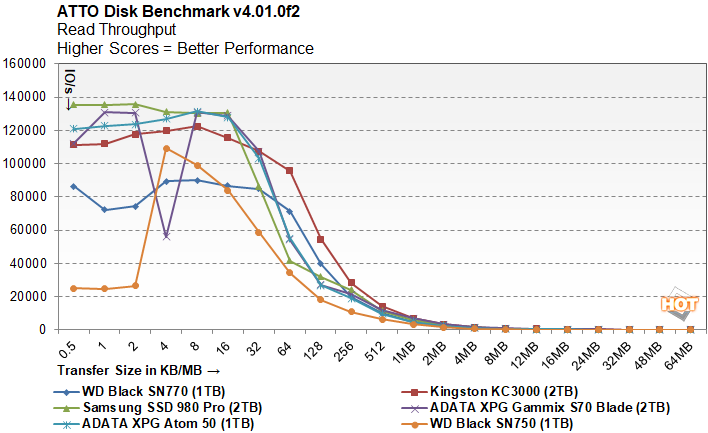 IO performance according to ATTO had the XPG Atom 50 competing well with the other drives we tested. Save for a couple of the very small transfers sizes in the write test, the XPG Atom 50 was right in the mix. 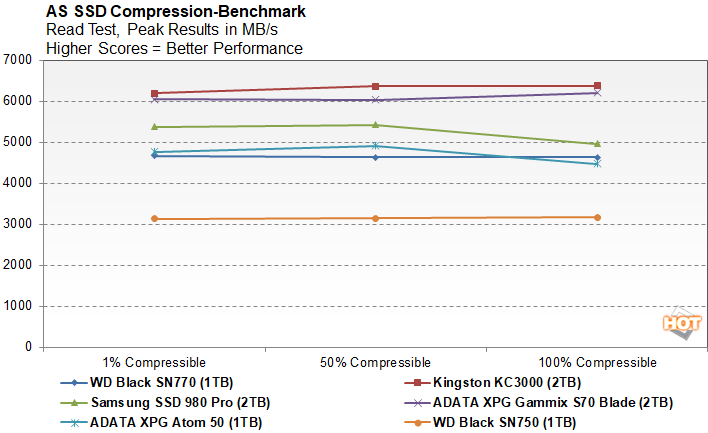 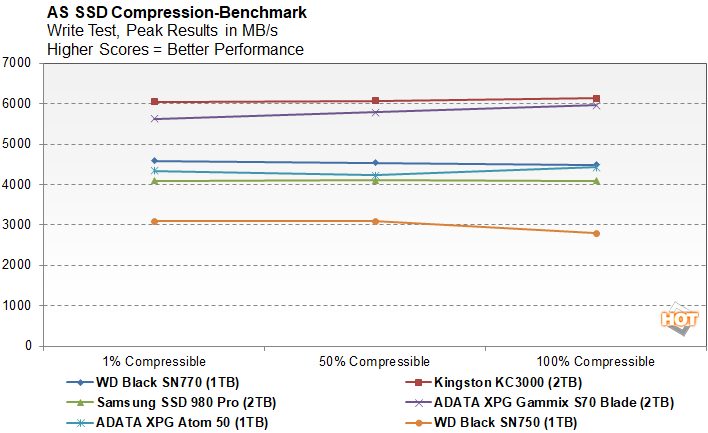 The compressibility of the data being transferred across the drives has virtually no impact on performance, and the ADATA XPG Atom 50 puts up numbers in-line with its rated specs across the board.