Both major GPU vendors right now have either launched or are about to launch new graphics processors based on the latest process technology. NVIDIA's Ada Lovelace architecture has seen the light of day with the GeForce RTX 4090, and AMD's set to launch its Radeon RX 7000 series GPUs on November 3rd. As happens with die shrinks, both families of chips are exceptionally efficient, which means it should really be no surprise that the next generation of laptop GPUs could meet or exceed the top-end of current desktop GPUs.

That's what's about to happen, according to the usual crew of Twitter leakers. Greymon55 tweeted "💻≈6950xt", rather clearly indicating that the next laptop Radeons will offer performance similar to that of the Radeon RX 6950 XT. For those who aren't familiar with AMD's biggest and baddest current desktop GPU, just know that it's slightly ahead of the Radeon RX 6900 XT, and that GPU can go toe-to-toe with NVIDIA's GeForce RTX 3090. 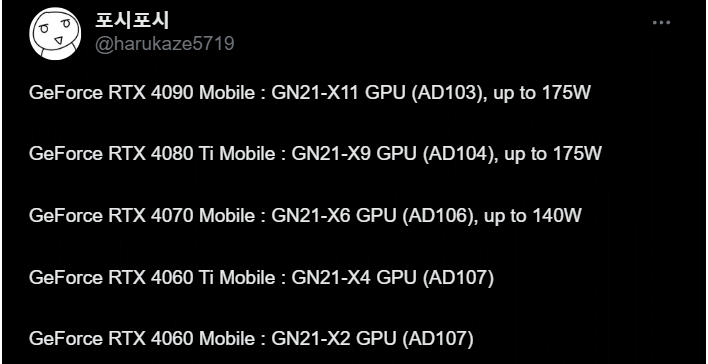 Along similar lines, 포시포시 (better known as @harukaze5719 on Twitter) followed up another leak with an explanation that the GeForce RTX 4090 Mobile would be based on the same AD103 GPU as the GeForce RTX 4080 desktop. Now, that's not to say it will have the same performance—that card is rumored to have a circa-400-watt Total Board Power (TBP), while the mobile version is said to top off at 175W.


That's still quite a lot of power for a mobile GPU, though, and many sources have already shown that the GeForce RTX 4090 can scale downward quite far without losing much performance at all. We expect AD103 at 175W to still be incredibly potent—indeed, it may also be similar to the GeForce RTX 3090 and its red-team competition.
Stepping back to Greymon55's Radeon rumor for a moment, we expect that the laptop GPU matching the Radeon RX 6950 XT will be based on the Navi 32 design, rather than the flagship Navi 31. The biggest Radeon RX 7000 part, presumably known as the Radeon RX 7900 XT, will purportedly be based on Navi 31, with a massive Graphics and Compute Die (GCD) and six Memory and Cache Dice (MCDs) giving it 12,288 shaders and a wide 384-bit memory bus.


The Navi 32 chip that will likely find its way to the fastest laptop Radeons is smaller, with only four Shader Engines instead of six, giving it 8192 shaders across 32 Work Group Processors (WGPs). That's still a gigantic chip compared to the previous generation, which tops out at 5120 shader processors. With four MCDs, it will have a 256-bit memory bus, equivalent to Navi 21 (RX 6800 and higher), albeit with a higher transfer rate.
These top-end laptop GPUs will surely only show up in the fastest and most expensive gaming laptops, but if the top of the range is this powerful, it makes us shudder to think what will appear in the lower reaches of the power envelope. That's to say nothing of the integrated GPUs on AMD's Phoenix Point APUs. Those will be using the same RDNA 3 architecture as AMD's next-gen Radeons, and could be ridiculously capable for integrated graphics.

Unfortunately, while it's fun to fantasize about super-fast laptop parts, we won't see any of this hardware until next year, so don't hold your breath.