If that headline leaves you wondering what Phoenix and Dragon Range are, let's get you up to speed first. Phoenix, apparently also known as Phoenix Point (not to be confused with the game of the same name), is the codename for AMD's future mobile CPUs based on the Zen 4 architecture. They'll include Zen 4 CPU cores along with DDR5 memory, PCIe 5.0 support, and powerful integrated graphics based on RDNA 3.


Dragon Range is a slightly less familiar name, although we've certainly heard it before. It's essentially AMD's attempt to capture the top end of the gaming laptop market, which demands powerful CPUs paired to discrete GPUs. Given the emphasis on discrete GPU horsepower, there's less need for graphics capability, and so Dragon Range appears to essentially be a mobile version of the "Raphael" desktop CPU silicon.

All of the above was essentially confirmed by a new leak from RedGamingTech—assuming the leak is accurate, anyway. In a YouTube video, embedded above, Paul from RedGamingTech lays out his predictions for AMD's Phoenix and Dragon Range processors. Despite the latter being the faster chips, it's definitely Phoenix that is the more interesting product family. 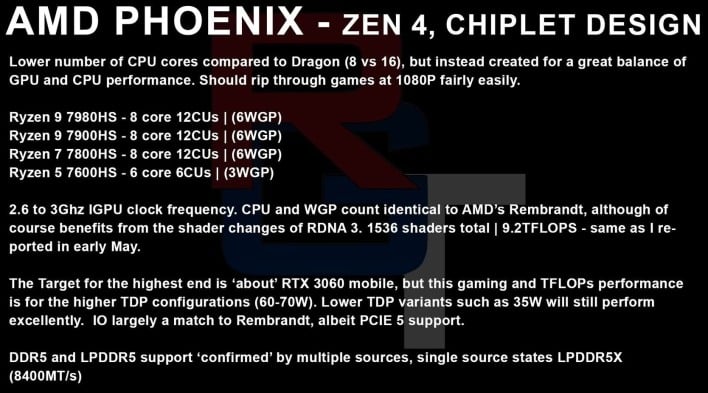 The slide above, taken from RedGamingTech's video, clearly lays out his expectations for Phoenix. At the top-end, he expects the Ryzen 9 7980HS to have eight Zen 4 CPU cores and six RDNA 3 WGPs, which comes out to 1536 shaders—absolutely massive for an integrated GPU. Overall, in terms of specifications, they will essentially be similar to the extant "Rembrandt" processors that compose the Ryzen 6000 Series mobile family, just upgraded with Zen 4 and RDNA 3.

However, that ignores potentially huge changes in packaging and structure. Rembrandt is a monolithic die, but Phoenix will instead apparently be a chiplet-based design, with separate physical chips performing the processors' various functions. As you can see in the mockup above, it is predicted that, unlike extant Ryzen processors, the CPU cores and I/O will share a die. Meanwhile, there will supposedly be separate dice for graphics, the memory controller and system-level cache shared by CPU and GPU.

Along with that mockup, he also shared some other "low-confidence" information about Phoenix. One source claims that the Phoenix iGPU has some measure of Infinity Cache onboard; for our part, we suspect this is probably a misunderstanding of the GPU's ability to access a system-level cache (much as Intel's IGPUs can do.) Alternatively, it has been said in the past that Phoenix may come with 3D V-Cache, so perhaps there will be models that ship with 3D V-Cache serving as Infinity Cache for the integrated RDNA 3 GPU. 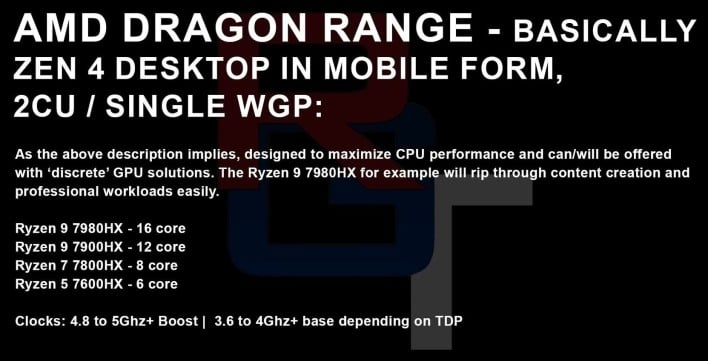 Meanwhile, it seems like Dragon Range will essentially be a clock-tuned variant of Raphael, as we mentioned above. This is in direct response to Intel's Alder Lake HX processors that are likewise clock-tuned variants of the ADL desktop silicon. Just like Raphael, Dragon Range will scale up to 16 cores, although clock rates will probably vary drastically between laptop vendors and models.

Raphael includes a small GPU for basic graphics, and thus Dragon Range likely will too. It will be interesting to see if AMD uses it for switchable graphics the way Intel does, or if the Dragon Range IGP will simply be disabled. Either way, it's encouraging to see AMD harmonizing its architectures across its product stack instead of making APUs wait a generation to get the latest CPU and GPU technology.