Memory bandwidth is one of the most important specifications that determines a graphics card's performance potential. It reflects the maximum data throughput rate between the GPU chip itself and its memory packages. That's why hardware nerds like us are always quite keen to hear what the final shipping memory speed will be for new GPUs. For AMD's upcoming RDNA 3-based Radeon RX 7000 family, we've heard conflicting rumors, but Greymon55 is here to set us straight: it'll top out at 20 Gbps.

The bandwidth is calculated by taking the width of the memory bus and multiplying it by the per-pin transfer rate of said memory packages and is usually expressed in terms of gigabytes-per-second. Obviously, the potential transfer rate of the DRAM ICs surrounding the GPU package is a critical element of this equation. 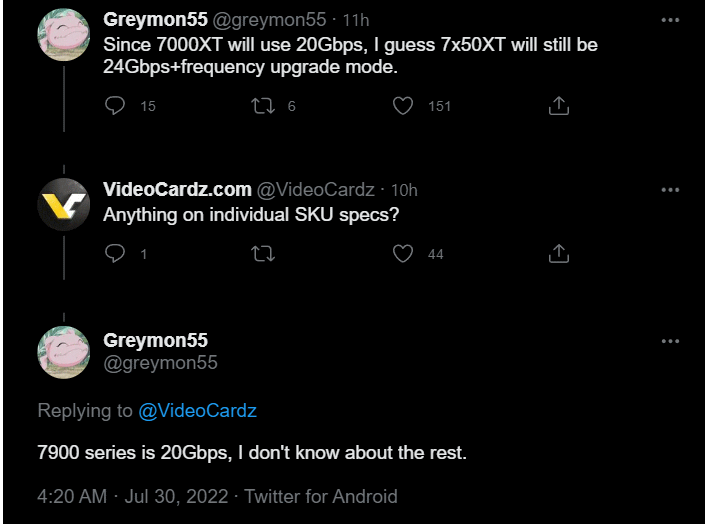 Replying to VideoCardz, Greymon55 confirms that the Radeon RX 7900 XT, expected to be the top-end SKU in AMD's next graphics card family, will use 20 Gbps memory. Assuming other leaks are accurate, it will likely use twelve 2GB GDDR6 ICs for a total of 24GB of video RAM running at 20 Gbps across a 384-bit bus.


That would deliver a final memory bandwidth spec of 960 GB/sec, which isn't the highest we've ever seen on a Radeon—that honor goes to the Radeon VII and its 1 TB/sec—but it is still extremely fast. We are a little surprised AMD didn't go for broke with Samsung's screaming 24-Gbps memory, but perhaps the price was too dear.


AMD's extant RDNA 2 graphics cards are competitive with NVIDIA's Ampere family despite drastically lower video memory bandwidth. That's mostly thanks to their use of large on-die caches, which AMD calls "Infinity Cache." However, when applications' framebuffers exceed the capacity of the Infinity Cache, as can happen frequently in high resolutions, performance falls off somewhat.


The massive jump in memory bandwidth on AMD's next-generation parts may be an attempt to alleviate those effects somewhat. It may also be an attempt to improve performance in certain types of GPU compute workloads. While the RDNA architecture is focused on gaming, the cards are still massive compute accelerators, and it is possible that some vendor or another was disappointed in the relatively limited memory bandwidth of AMD's current-gen cards.
According to the leaks we've seen, the Radeon RX 7900 XT should be based on the Navi 31 GPU. It is expected to use a single large Graphics Compute Die (GCD) along with six Memory and Cache Dice, or MCDs. Each MCD has its own 32MB of cache, which will give the RX 7900 XT up to 192 MB of Infinity Cache, or possibly even 384 MB if the rumors about a 3D V-Cache-equipped model are accurate.

It is very likely that the MCDs will have to run at the same clock rate as the memory, and it could be that the use of 3D V-Cache is another limiting factor on memory transfer rate. Whatever the case, Navi 31 will certainly be the biggest Radeon we've ever seen, and we are totally here for it—especially considering AMD's recent successes cleaning up its graphics driver.