With every new rumor and leak that comes out, it seems like the next-generation graphics cards from both AMD and NVIDIA get more powerful and more power-thirsty. Well, today's tidbit from the rumor mill puts the kibosh on that trend, as it seems like AMD's Navi 3x GPUs might actually be significantly less capable than earlier rumors implied.

To be clear, the source for both the earlier rumors and this revised opinion is Digimon-themed Twitter user Greymon55. He's been right many times in the past, so we have lots of reason to take his words at their face value—even as vague as they usually are. For instance, this time, Greymon55 simply tweeted "12288, 8192, 4096."


We followed along, but fellow Twitter hardware enthusiast Redfire (@Redfire75369) put the pieces together for everyone who's confused: they're the shader counts of Navi 31, Navi 32, and Navi 33, or the top three RDNA 3 GPU parts to be used in the next series of Radeons—presumably, The RX 7000 series. 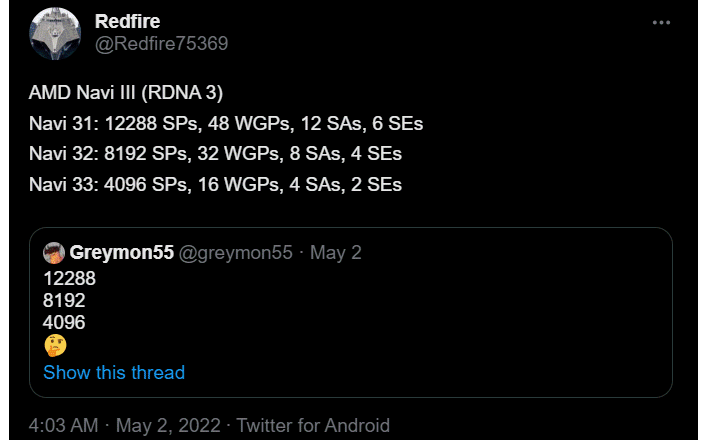 The bottom number, corresponding to the midrange Navi 33 part, is the same as was rumored in the past. However, the top two, representing the high-end Navi 32 and enthusiast-class Navi 31, have dropped a bit; particularly, this information shaves off fully a quarter of the shader cores from the top end Navi 31 part.

Interestingly, if we look at the last leak from Greymon55, he stated that Navi 31 would hit some 92 TFLOPS in FP32 compute. Doing so with the new shader count total would require a 3.75 GHz GPU clock—even less likely than the 3GHz clock rumored before. However, if we take the new shader count and apply a 3GHz clock rate to it, we come up with peak theoretical FP32 math throughput of about 74 TFLOPS.


That number is right in the pocket of the performance that Greymon55's original RDNA 3 leak implied. What seems likely to us is that the leaker heard about the possible configuration of the chips along with their expected performance back in November, then later heard about the 3GHz boost clock and put 2 and 2 together. If we look at the latest numbers—that's 3GHz and 12,288 shaders—we come back around to the original performance estimate. 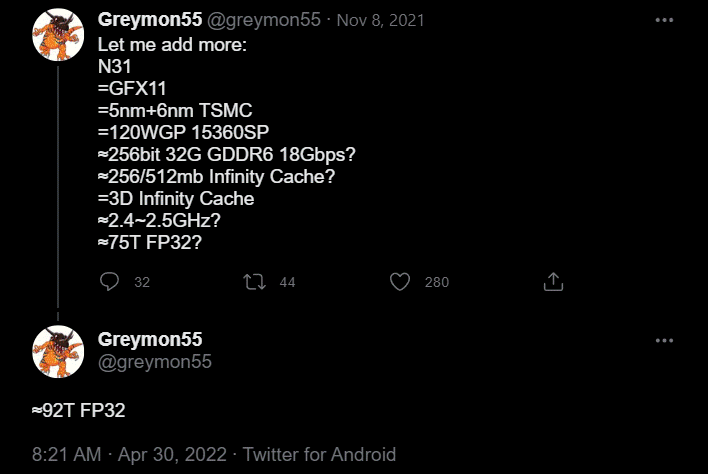 
That's enough for us to call this leak plausible. Notably, though, this leak doesn't necessarily mean much for the 3D games performance of these parts. The biggest difference from losing as much as 25% of their WGPs will be in the texturing rate of the GPUs, and while that could have an impact, it certainly won't be 25% less performance.

We won't know anytime soon, anyway—these GPUs are still several months out. Heck, AMD hasn't even officially announced them yet aside from acknowledging that RDNA 3 exists. We'll likely have a better grasp on the core configuration of these chips once that announcement comes, which should be in the next couple of months.