Game development is complex, and launching a successful game even more so.  Sometimes, anything that goes into development and the gamer experience can change on a dime or entirely fall apart. We can see this with the launch of Cyberpunk 2077, which could be easily described as something of a train wreck. Bugs on all platforms cropped up and the social sphere exploded with complaints. To be clear, the game is still enjoyable if you can play it aside from the current issues. No matter what, though, Cyberpunk 2077's launch was plagued with issues, developer crunch, alongside excessive hype, which was all likely driven by shareholder and consumer pushback to get the game out. The whole spectacle is a case study in the multitude of issues of the video game industry right now.

First and foremost, you cannot talk about Cyberpunk 2077 without talking about the overwhelming number of bugs that players encountered on every platform. What began as just some older console issues has spiraled into what could be a rather drastic fall from grace. When Cyberpunk launched around December 10th, we reported how the game ran on both the Xbox One and PlayStation 4. Loading times were atrocious, and it was just not worth playing on the older hardware. The out we gave to CD Projekt Red at the time was that it was impressive that such a new game even ran on hardware over seven years old. It turns out, however, that the older consoles just showed their issues first in what could be considered the tip of the iceberg.

Two days after the initial launch, CD Projekt Red shoved out the first update of perhaps many to Cyberpunk 2077. Besides listening to community feedback about seizures caused by the braindance cutscenes; there were also fixes for gameplay-hampering bugs. However, this patch was not enough as PC Cyberpunk players started to have more significant issues just a day later. Specifically, people found that AMD Ryzen CPU owners were gimped in Cyberpunk 2077 as the game did not correctly utilize simultaneous multithreading. After this happened, a patch came out to fix the issues, but the game had already begun to crumble under the weight of unhappy gamers from all walks of life. 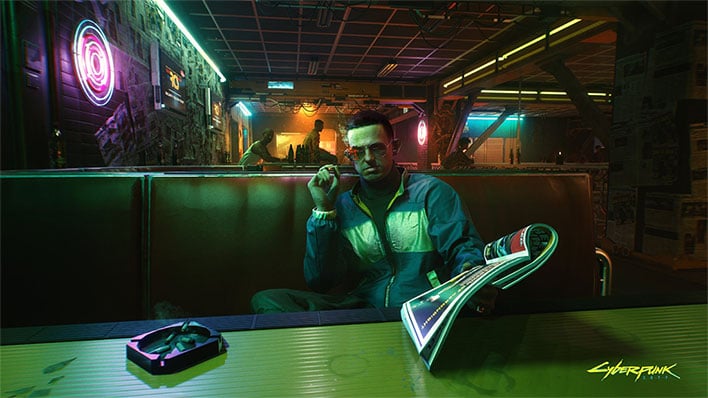 CD Projekt Red quickly offered refunds and apologies for their errors in launching the game to keep ahead of the tsunami of problems. At the same time, it was evident that CD Projekt Red would have to try harder to keep its head above water. First, Sony pulled Cyberpunk 2077 from the PlayStation Store with the promise of refunds for those who requested. Then, Microsoft began to offer refunds but stopped short of pulling the game from digital shelves. Even Best Buy jumped on the bandwagon, offering refunds through December 21st on both unopened and opened copies of Cyberpunk. Today, issues are still cropping up, such as save data getting corrupted if you collect too many items. When all is said and done, what started as lingering issues on older consoles turned into an unprecedented outpouring of disdain and refunds. But how did we end up here with a game that was so hyped up and sought after by thousands of gamers around the world?

As Cyberpunk 2077 was delayed time and time again, one would think that developers could squash all the issues, and gamers would be relatively happy; but that was not the case as we now know. The problems players have encountered with the game could perhaps be attributed to bad developer management. Developer crunch is an issue that has been talked about year after year, and it plagues many studios. Management wants a game done to appease whatever stakeholders are in play, be it shareholders or consumers, and developers are left to bear the weight of anything that happens. If it ends up being a great game, everyone gets a pat on the back to cap off a stressful development timeline. If it ends up going south, developers end up more stressed than they already were and are left to bare the brunt of the community criticism awaiting a great game.

However, in the past couple of days, it seems Cyberpunk 2077 developers have stepped up to defend themselves against poor management and crunch. Bloomberg reports that "Developers asked blunt questions about the company's reputation, the game's unrealistic deadlines and the relentless overtime in the months and years leading up to the game's December 10th release." Obviously, no real answers seemed to come from these questions.

Ironically, a developer of the game realized what was all going on and asked the poignant question of "whether CD Projekt's directors felt it was hypocritical to make a game about corporate exploitation while expecting that their employees work overtime." Realistically, it is incredibly hypocritical, but the only reply was "vague and noncommittal." Surprise. However, to play devil's advocate, perhaps the management felt they needed to push for the game to come out as soon as possible after all the delays. Maybe there was too much pressure riding on the game coming out on the third delayed release date. Just maybe there was too much hype surrounding the game and not enough time for lofty goals to come to fruition, causing that pressure.

Excessive hype, while great for marketing and sales, is not great for much else. Yes, consumers get excited, but the excitement of anticipation is often not met with similar excitement in reality. In fact, this is something we have seen before. In 2016, No Man's Sky launched after much excitement and four years of development. What was to be a game of the decade, or something like that, turned into accusations of false advertising and a PR implosion. This came from what was described as "boring gameplay" and legal discussions on reddit of what entails "material that might mislead a customer." Granted, this was a game coming from an indie studio, but customer expectations are something that should be managed by any company, big or small. When hype gets too far out of hand, especially in Cyberpunk 2077's case when you bring in movie stars like Keanu Reeves and have a multi-million-dollar advertising budget, something is almost bound to go sideways.

Whether or not you are a fan of Cyberpunk, you likely knew about the game through trailers and other forms of advertising, and knew what could make it exciting. The hype can be a tall order to deliver on. Developers want to make a great product that gamers will enjoy.  However, between the crunch, game bugs and pressure, the game development industry can be a real grind. Except for the extreme passion of making something cool for millions to enjoy, the upside may just not be there.


Behind the entirety of game development, shareholders and upper management want the developers to make a great game as obviously it can return boatloads of money on their investment. What's more, is that the shareholders and upper management are also behind excessive hype and developer crunch to milk a game for all its worth. If people do not know about a game or it does not come out on time, it all can be a losing proposition. The blame cannot be solely put onto the management of developers, though. Consumers also buy into all of this with every new game that comes out. People buy pre-orders, push for the game to come out regardless of its development state, and then get angry when things do not go exactly to plan. This all amounts to the vicious cycle in the video game industry, and something needs to change.

Game development is a complex beast of an industry, and many factors go into a successful game. We know now of the bugs, developer crunch, excessive hype, and shareholder driven underbelly of the games industry, which can be incredibly unhealthy for all involved. Cyberpunk 2077, while still fun to play, has its wide variety of issues, and it should be a learning experience for all. Though the launch was rocky, to say the least, it's not the end of the world. Perhaps consumers need to just relax and learn to just enjoy the game as it progressively gets better.

Moreover, development studios need to look to CD Projekt Red as a case study of what not to do for their own games and the health and well being of their companies. Something has to give and break the vicious cycle of game development that exists today.