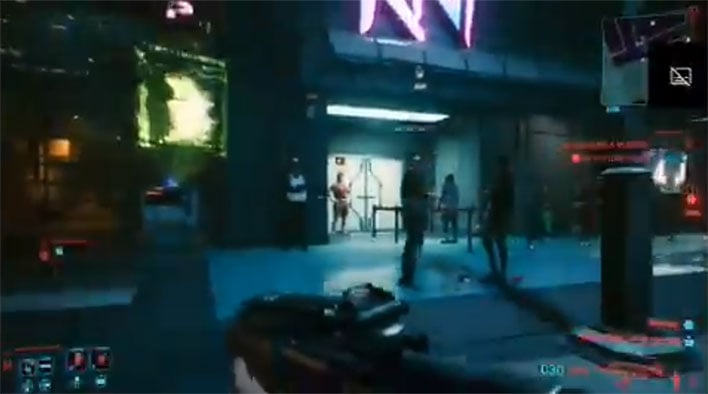 We know a few things about next-gen game consoles and graphics cards. Like, the PlayStation 5 is fire (in a good way). So is the Xbox Series X, and the same can be said of AMD's Radeon RX 6000 series and NVIDIA's GeForce RTX 30 series. All good hardware for playing Cyberpunk 2077. You know what might not be good hardware for the game? Last-gen consoles.
At long last, Cyberpunk 2077 is out, bringing with it all of its graphical glory and advanced effects, like real-time ray tracing. On the right hardware, it is a visual splendor. But on older hardware—the PlayStation 4 and Xbox One—let's just say the graphics take a hit. To highlight this, users have been uploading videos and images to Twitter.
The one you see at the top of the article is a screenshot from a video posted by @THEAP99. To be fair, extracting images from Twitter after blowing up the video results in a lot of compression and artifacts that are not really there. However, you can watch the clip to see the downgrade in image quality, versus what you might have been expecting.
"Cyberpunk 2077 on base consoles (how a great percentage of people will play it) is an absolute travesty. My god people, I mean look at how those two NPCs ran at the end, they were like the Spider-Man ps4 ps2 boat Easter egg," the user commented.
One of the more hilarious examples plays to the soundtrack for Jurassic Park, with the game transitioning from the E3 trailer in 2018, to the PS4. Have a look and see if you can get through it without laughing...

Did you? Yeah, neither did we! Here is another, without the comical twist...

This is Cyberpunk 2077 - PS4 version 1.00. Resolution is literally below 720p and the game takes 20 seconds to load in textures. Inexcusable. Unfathomable. Unplayable. pic.twitter.com/AZ2OPTnkdL

To be fair, these consoles are seven years old, and Cyberpunk 2077 is a cutting edge edge game, in terms of the technology underneath the hood. It is also rather big.
In addition, CD Projekt Red was certainly patch-happy after The Witcher 3 launched, and it stands to reason that several patches will be doled out for Cyberpunk 2077 as well, with some prettier graphics and optimizations aimed at cleaning things up on older consoles. Or so we hope.
Alternatively, if you are not rocking the latest hardware, you can always play the game through NVIDIA's GeForce NOW cloud gaming service, and through Google Stadia, without any downloads.