At today's Financial Analyst Day, AMD revealed several tidbits of information about its forthcoming technologies and products roadmap, and the company also confirmed a few details that rumor-mongers have been reporting for months now. We're going to go over the company's announcements in the server space in future post, but first, let's take a look at what AMD's disclosed about its consumer-focused products. 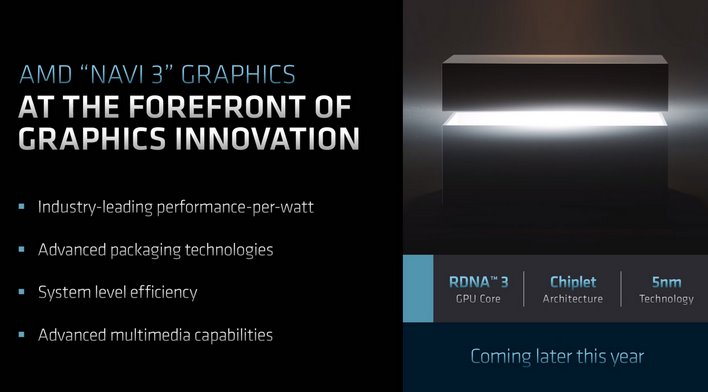 AMD is claiming that its next-generation Radeons will achieve a greater-than-50% improvement in performance-per-watt metrics. That sounds like a very bold claim, but it's important to remember that RDNA 2 already achieved such a feat over the short-lived original RDNA architecture in the Radeon RX 5000 series. The big feature hook that boosted performance for RDNA 2 was the addition of Infinity Cache, and that's not going anywhere. However, RDNA 3's new trick will be the use of "advanced chiplet packaging." 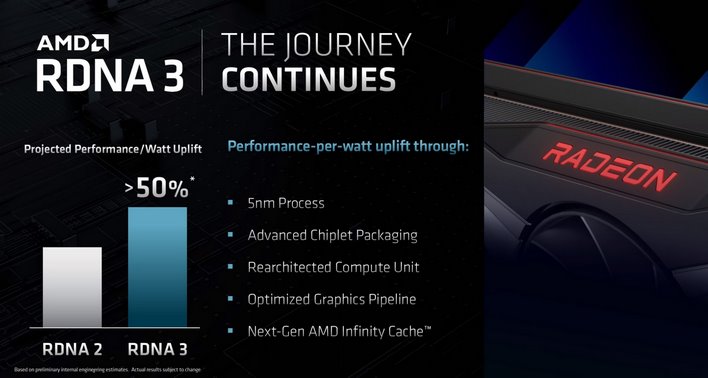 Rumormongers and leaksters have been spreading the idea that RDNA 3 would be chiplet-based for a long time now, so this may not a surprise to some, but it's still excellent to finally have confirmation on the matter. AMD also confirmed that RDNA 3 GPUs would be fabricated on a "5nm process," which basically means TSMC N5. The company continued to say that an "optimized graphics pipeline" will enable yet higher clock rates, while GPU's "rearchitected compute unit" will have much-needed ray-tracing performance improvements over RDNA 2 as well. 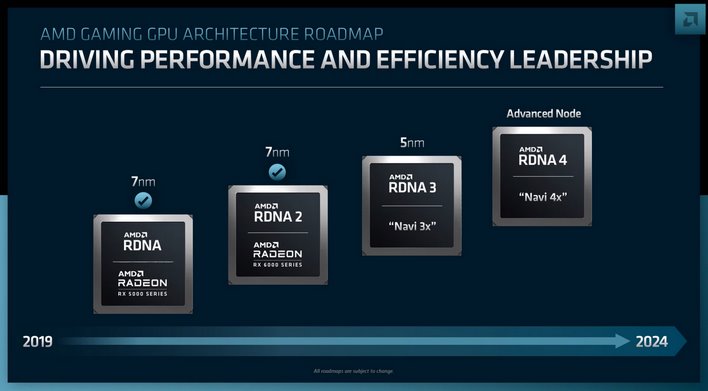 AMD says that RDNA 3 GPUs are coming later this year, as expected, while its roadmap vaguely indicates that RDNA 4 will hit the stage possibly in late 2023. Performance-per-watt may not be as exciting of a metric as pure performance, but considering what we've heard through the grapevine about the kinds of power targets AMD is aiming for, we don't think gamers will have much to worry about in terms of raw performance either. 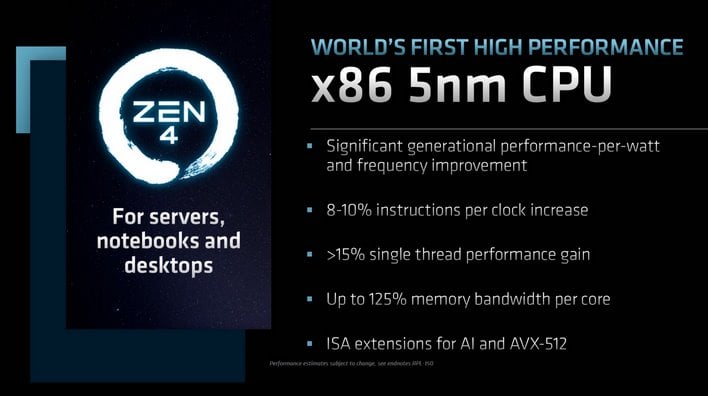 The other big announcements for the consumer side of things are of course concerning the Zen 4 architecture, and what it brings to desktop and laptop systems. AMD is dropping a stake in the sand about having the first desktop CPUs built on a 5-nm process, but the real interesting parts are the claims of "significant generational performance-per-watt and frequency improvement."

Specifically, AMD says we can expect an "8-10% instructions per clock increase" as well as a >15% single-thread performance gain. The latter is nearly the same claim that AMD made at Computex, and that claim was somewhat controversial, as some folks thought that a 15% single-threaded performance gain was mediocre, perhaps. We think it's safe to say that if AMD is looking at a 10% IPC increase, as well as "significant" frequency improvements, we'll be seeing more than 15% on a single thread (as the company notes), maybe much more. 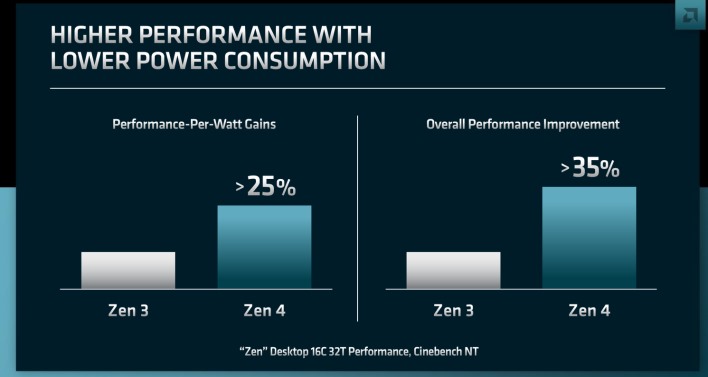 Some of Zen 4's additional performance gains are also no doubt due to the inclusion of AVX-512 instruction support. This may have limited appeal for gamers and enthusiasts, but the fact of the matter is that AMD's Zen 4 core has to suffice for everything from enterprise servers and cloud hyperscalers, to gaming systems, and slim-line laptops.

It's true that many of the AVX-512 instructions generally have limited use outside of AI and HPC workloads, but AVX-512 itself brings along larger CPU registers and additional instructions that can be used for gaming and other desktop workloads. Chief among those are arguably the Vector Neural Network Instructions (VNNI). These comprise the core of AMD's AI speedup for Zen 4, and will help Zen 4 CPUs make use of their 125% improvement in per-core memory bandwidth brought on by the move to DDR5 memory as well.

AMD also re-confirmed the existence of Zen 5 and said that progress is "well underway" for its next-next-gen architecture. AMD has two teams working on its CPUs side-by-side in what it calls "leapfrog" methodology. So the team working on Zen 5 has been plugging away even as the Zen 4 team gets ready for the launch of those chips.

Zen 5 will apparently be an all-new architecture from the ground up with better-integrated AI optimizations, as well as a focus on the CPU's ability to scale. There was no mention of any such big.LITTLE or P-core/E-core division, as has been rumored for those processors, but it may simply be too early for AMD to talk about such things. 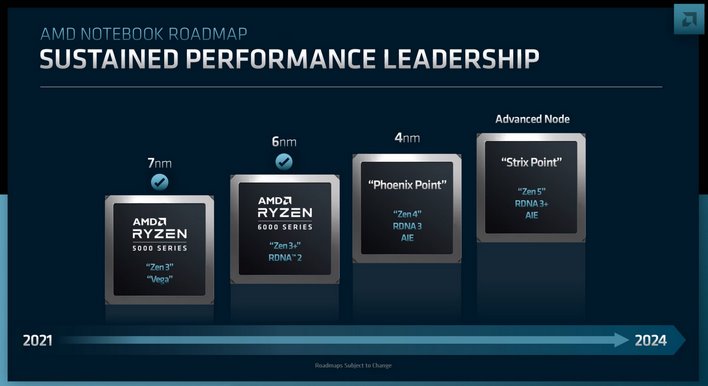 AMD shared a few simplified roadmaps regarding its upcoming mobile processors as well. We're less than six months out from the release of the Ryzen 6000-series mobile processors with Zen 3 CPUs and RDNA 2 GPUs, but the roadmap here confirms that the company's next mobile parts will indeed be based on a an architecture codenamed Phoenix Point, as previously rumored.

Interestingly, despite that RDNA 3 will likely still be rather new when its released next year, Phoenix Point processors will include Zen 4 CPU cores and RDNA 3-based graphics on board as well. It's nice to see AMD finally moving its latest integrated graphics cores to its new CPU architectures as well. Phoenix Point will be built on TSMC's N4 process, and then after that, we'll apparently see Strix Point with Zen 5 CPU cores and improved RDNA 3 graphics, likely in 2024. 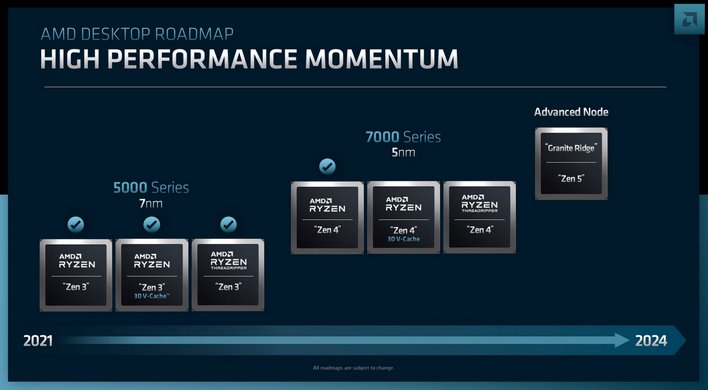 On the desktop roadmap, well, there's no big surprises here. AMD intends to release Zen 4-based Ryzen 7000 series CPUs later this year, and then we'll see Zen 4 processors with 3D V-cache onboard a bit later, along with a Ryzen 7000 Threadripper series, also based on Zen 4. There's no indication that these Threadrippers will be exclusively "PRO" models like the extant 5000 WX series, but we'd reckon you can probably bet on it. 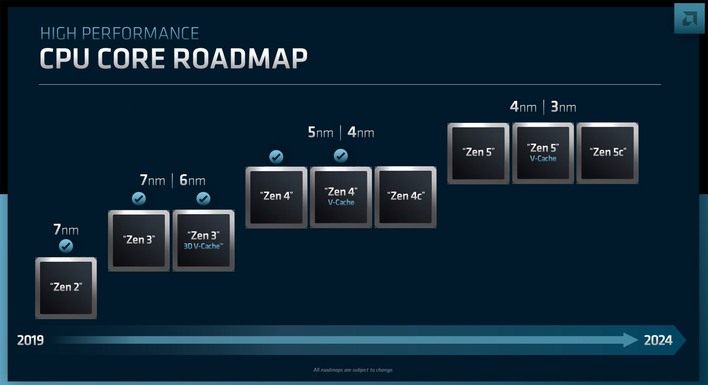 AMD also shared this CPU core roadmap in more detail as well at Financial Analyst Day (FAD) 2022. It's rather similar to the last one we saw, but there's one key detail here that we found fascinating. The last roadmap marks Zen 4 with a check mark like the previous CPUs that are completed product, rather than work in process. This makes sense, as those processors are just around the corner (relatively speaking) and likely more or less ready for release.

However, this roadmap also has a checkmark on the "Zen 4 V-Cache" models. Whether this simply means that Zen 4 with 3D V-Cache onboard is already up and running in AMD's labs, or perhaps that we'll see Zen 4 CPUs sporting extra cache sooner than later, is anyone's guess. This chart also includes mention of the Zen 4c CPU core, as well as confirmation that the same thing will be available for Zen 5. You can read more about those cut-down cores in our forthcoming AMD data center coverage. So do stay tuned.