Rumors about next-generation GPUs just don't stop. Every tidbit of news we hear about AMD's Radeon RX 7000 series and NVIDIA's Ada Lovelace GPUs leaves us mind-blown at the possibilities—to say nothing of Intel's top-end Arc offerings. This time around, it's the red team in the rumor mill, with an update to an old leak from Greymon55.


The orange Digimon who is curiously-informed about graphics-processor goings-on has replied to a six-month-old tweet of his own, updating an earlier prediction. In this case, the update is to suggest that Navi 31, the biggest product from the RDNA 3-based Radeon RX 7000 series, will in fact exceed the previously-predicted 75 TFLOPS of FP32 compute and scale all the way to approximately 92 TFLOPS.


That is absolutely absurd performance, and to achieve that using the specifications announced before (60 WGPs, giving 15360 FP32 shaders), it would require a core clock of around 3 GHz. Such a thing isn't totally impossible, but it seems unlikely; Navi 31 is said to be a pair of chips each approximately the size of Navi 21, and that GPU tops out at around 2.3 GHz. It certainly casts the high power usage rumors in a new light.


On the topic of Work Group Processors (WGPs) vs. Compute Units (CUs), there's been a lot of confusion about the leaks for RDNA 3. Some leaks have said 60 WGPs, some leaks have said 120, and we've also seen a 256 CU-leak going around. Well, by examining the Linux drivers, it's possible to decipher exactly what's happening.

Twitter-leaker Kepler pointed this out for everyone yesterday by explaining that, contrary to AMD's earlier messaging, Work Group Processors and Compute Units are both still used to describe the structure of a Radeon GPU. To sum up: one Shader Engine (SE) appears to include 10 WGPs, each of which is made up of 2 CUs. Each CU in RDNA 1 and RDNA 2 has 64 FP32 shaders, giving a total of 1280 shaders per SE.


The Radeon RX 5700 XT had two RDNA Shader engines, while the Radeon RX 6900 XT had four RDNA 2 SEs. According to the information in the extant Linux drivers, RDNA 3's top-end part will have six Shader Engines, but that's not the whole story. As it turns out, RDNA 3 is also doubling the amount of shaders per CU. That means 128 FP32s per CU, or 256 per WGP. With two dice, each with 30 WGPs, we're looking at 15,360 shaders for Navi 31. 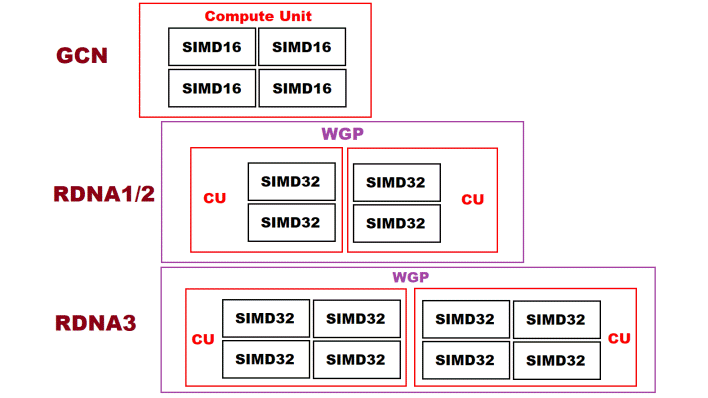 Diagram illustrating the construction of CUs in recent Radeon architectures. Source: @Kepler_L2


Assuming the configuration of the fixed-function rasterization parts hasn't changed, the move to six shader engines means that we're looking at 192 ROPs and fully 480 texture units with Navi 31. Doing the math at the supposed 3 GHz clock rate, that gives us peak raster graphics performance exactly double that of the Radeon RX 6900 XT, just as rumored in the past.

Does that mean it's all coming together and this is all accurate? Well, we don't know. It does mean, at least, that the leakers have their stories straight, anyway. If true, and if AMD can pull this off without exceeding the 600 watt power limit of the 12VHPWR connector, it will mean a hard fight for the red team's competitors.