Enthusiasts, power users, and professionals in need of more compute muscle have been patiently awaiting another round of Threadripper. The wait is now over—AMD today unveiled its Ryzen Threadripper Pro 5000 WX series, a burly stack of high-end desktop (HEDT) chips based on its Zen 3 architecture built to accelerate workstation workloads.
Because we can read minds, let us say upfront it's not clear if AMD will also release a non-Pro Threadripper 5000 series at some point. We're not privy to those plans (or lack thereof, if that's the case). At least for the time being, AMD is focusing on the workstation variant with baked in security and manageability features that have come to define AMD's Pro models.

Arguably one of the biggest perks or benefits of AMD's Pro designation is the peace of mind that comes with extended support. Built for businesses, Pro processors deliver 18 months of software stability and a guaranteed 24 months of processor availability, along with enterprise-grade quality assurance (QA) and continuous platform validation. It's essentially a long-term commitment of support. 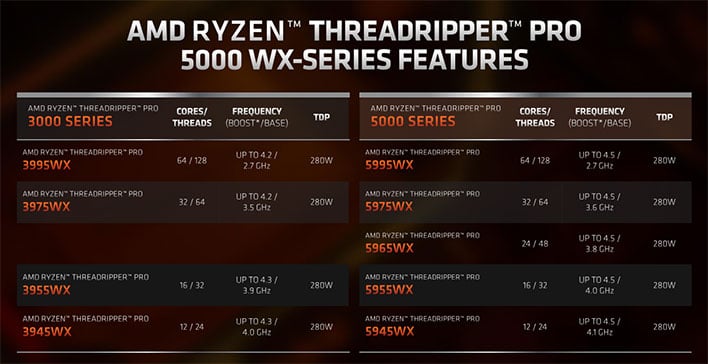 As with the previous generation, core and thread counts top out at 64 and 128, respectively. However, the combination of Zen 3 (better IPC) and faster clock speeds at every level means the Threadripper 5000 WX series should deliver a decent performance uplift over the last-gen models. All five SKUs have the ability to 4.5GHz. 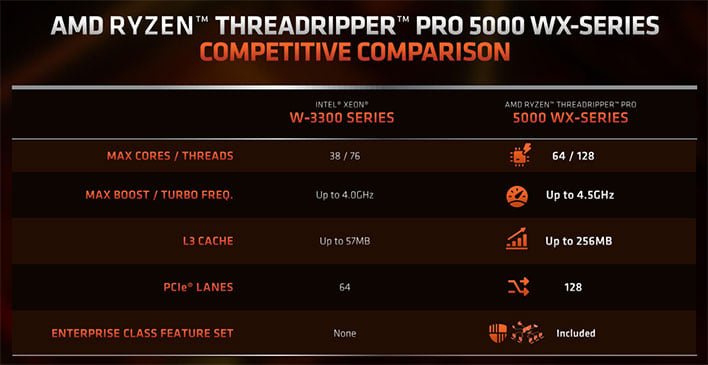 AMD is taking direct aim at Intel's Xeon W-3300 series based on Ice Lake, and you can see in the slide above how the two produce stacks compare. Simply put, the Ryzen Threadripper Pro 5000 WX boasts more cores and threads, a faster top clock speed, substantially more L3 cache, and twice as many PCIe Gen 4 lanes. Note that these are all single-socket solutions, unlike EPYC and Xeon Scalable, which offer dual-socket solutions.

Bearing in mind that these these new Threadripper SKUs are aimed at workstation environments, many of the performance features and claims are focused on non-consumer workloads. As such, AMD did not share any gaming numbers or things of that nature. You could certainly build a no-holds-barred gaming PC around any of the Threadripper Pro 5000 WX CPUs, especially when you get to the 24-core/48-thread 5965WX and above. But gamers are no the *ahem* core target here.
As it applies to making games, though, that's another story. Same goes for science, media, and entertainment chores... 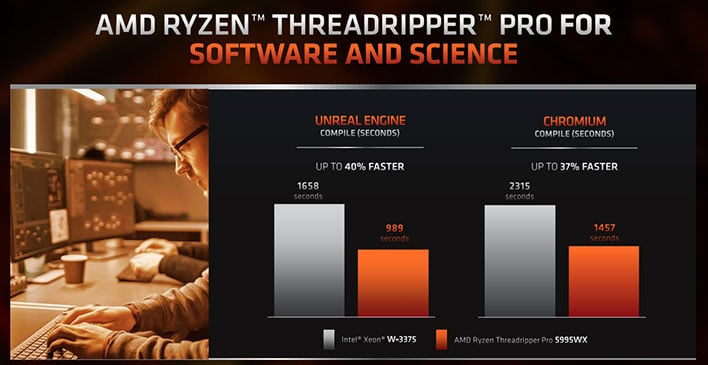 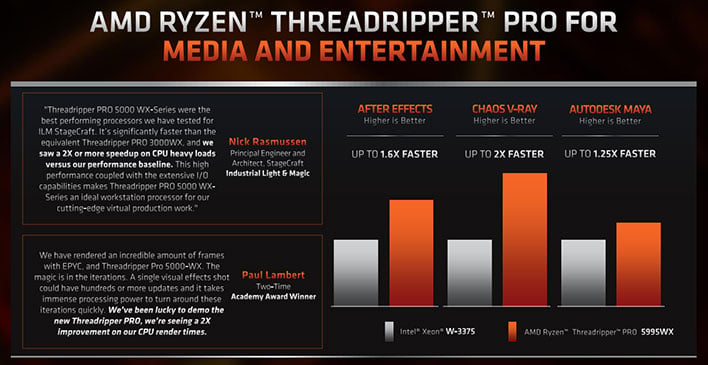 AMD compares its flagship 5995WX model with Intel's W-3375 in a handful of internal benchmarks. As you can see in above slides, AMD claims its top Threadripper chip compiles up to 40 percent in Unreal Engine and nearly the same margin (37 percent) in Chromium.

The other slide points to a twofold performance advantage over the Xeon part in Chaos V-Ray, as well as significant gains in After Effects (1.6X) and Autodesk Maya (1.25X). The messaging really boils down to AMD offering professionals more core and threads in this segment. 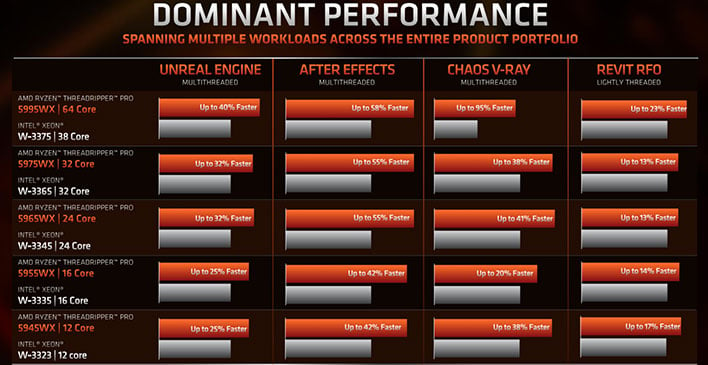 Of course, AMD is quick to point out that it's not just touting a performance advantage at the top of its stack, but at every step of the way when compared against the W-3300 series. Obviously the biggest gains can be seen at the top when there's a lopsided core/thread disparity, but according to AMD, it's Zen 3 Threadripper chips come out on top on level playing fields, at least in these benchmarks. 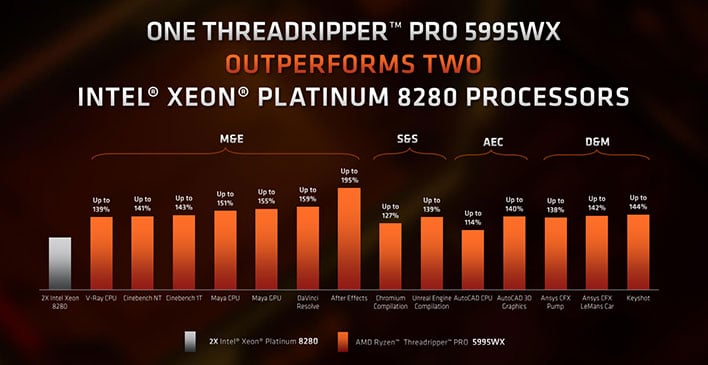 AMD also shared a collection of benchmark comparisons between a single Threadripper Pro 5995WX and dual Xeon Platinum 8280 processors. Each 8280 wields 28 cores and 56 threads, so a two socket configuration works out to 56 and 112 threads. There's still a core/thread disparity against AMD's 64-core/128-thread part, but AMD's flexing big performance wins of up to 114 percent (AutoCAD 3D) or more, and up to 195 percent (After Affects) from a single CPU setup. 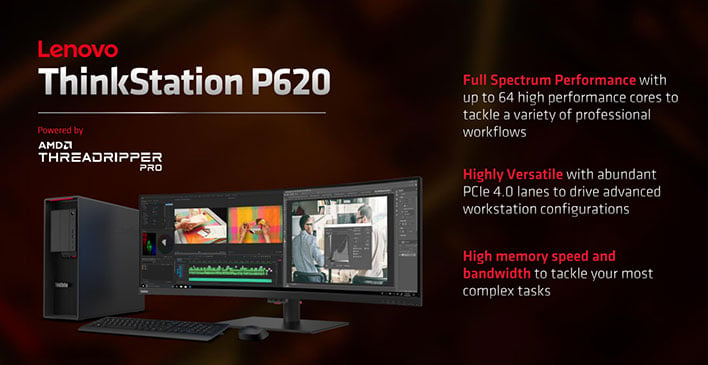 Lenovo will be the first to offer AMD's new Threadripper Pro 5000 WX models (OEMs are getting first dibs before the DYI market). It's ThinkStation P620 desktop can be configured with up to the top model, the 5995WX. We'll have to wait until later for other specification details and pricing.