AMD's Socket AM4 has had a pretty good run. First released in 2017 alongside the company's then-new Ryzen processors, it's had nearly five years to host some of the fastest desktop chips on the market, giving Intel some much-needed competition and offering users surprisingly-valid upgrade paths.


The successor to AM4, appropriately titled "Socket AM5," was first officially announced at CES this year, but at Computex on Monday AMD gave us some more details about the upcoming processor socket. It's a Landing Grid Array (LGA), like Intel's been using since the Core 2 era, and it's compatible with some Socket AM4 coolers. 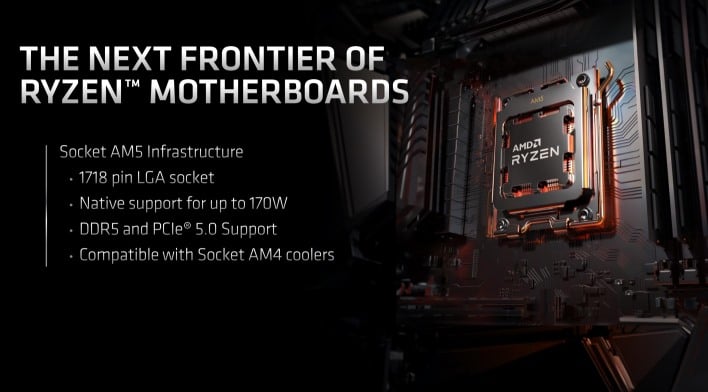 The thing is, AMD's Computex presentation arguably brought up more questions than it answered. When the company briefly talked about its upcoming Zen 4-based Ryzen 7000 processors, it offered up a few numbers that sent its fans (and the larger hardware enthusiast community) into a bit of a tizzy. Chief among these figures was the announcement that the 1718-pin socket would support "170W" processors.


Unfortunately, the slide simply says that—it doesn't elaborate on whether that's the usual design power (TDP) number—for which 170W would be extravagantly high—or whether it's actual peak power consumption, known in AMD terms as Package Power Tracking (PPT). After all, Intel's biggest and baddest desktop processors are already cresting past that 170W mark in terms of power consumption by quite a distance.
Well, it turns out that the 170W number is in fact TDP. It was a bit confusing, at first; on Wednesday, AMD's Robert Hallock spoke to several outlets and told them that the 170W figure would be PPT. That would allow for CPUs with TDPs up to a 125W TDP, which is more or less in line with current processors.


However, in our interview with Hallock yesterday (hit the 28 minute mark in the video above), he acknowledged his error and decided to set the record straight: that 170W number is TDP, and the actual maximum PPT for Socket AM5 will be 230W. That's a lot of power to push through a CPU socket, but again, Intel's already doing it (and AMD has done so, in the past).

AMD says that the original lineup of Ryzen 7000 series processors will stop at 16 cores, just like the Ryzen 5000 series, but that the 170W TDP spec will allow for future high-core-count processors to be released on Socket AM5.