If you're reading this site, we don't need to tell you that AMD and NVIDIA have new GPUs coming—partially because we've already told you, lots of times. However, new information from long-time Twitter leakster Greymon55 paints a big picture of both companies' forthcoming high-end silicon, and we mean *big*.

Like most of the prominent leakers, Greymon55 is known for posting fascinating technical details of upcoming hardware in tiny, cryptic snippets of text. This time around, though, they posted a pile of interesting specifications for NVIDIA's "AD102" halo-tier Ada Lovelace processor as well as AMD's "Navi 31" next-generation Radeon. Both tweets seem to summarize and corroborate previous leaks and rumors. 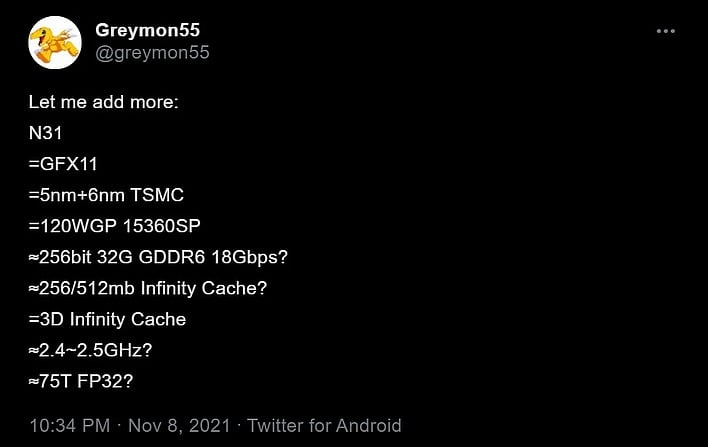 We'll start with the Radeon tweet, since it was posted first. In this latest leak, Greymon55 corroborates earlier rumors that the next flagship Radeon part will be an absolute beast with 15,360 shader ALUs across 60 workgroup processors. (Greymon55's initial tweet said 120 WGP, but they later corrected it) Like current high-end Radeons, it will use a relatively modest 256-bit memory interface. That will connect the GPU package to a hefty 32GB of GDDR6 memory at a transfer rate of 18Gbps per pin.

We say "GPU package" because as rumors have it, Navi 31 will be a multi-chip module (MCM) design like AMD's just-revealed Instinct MI200 datacenter compute accelerator. Greymon55 indicates that, like AMD's Zen 2 and Zen 3 CPUs, Navi 31's multiple dice will be fabricated on separate processes; in this case, TSMC 6nm for the I/O and cache die, while TSMC's refined 5nm process is employed on the dual power-thirsty compute dice. That third die will purportedly carry as much as 512MB of Infinity Cache. That's quadruple the amount on AMD's current flagship, the Radeon RX 6900XT.

If the predictions hold true and AMD is able to get these massive multi-processor number munchers up to "2.4~2.5 GHz," that would mean that such a theoretical "RX 7900 XT" based on Navi 31 could chew through as much as 75 teraflops of single-precision (FP32) floating-point math in a second. It makes one misty-eyed to look back on the Radeon HD 7970 and its "meager" 4 TFLOPs performance nearly a decade ago.

On the NVIDIA side of things, Greymon55 likewise collates previous leaks and rumors into a convenient post full of jargon that we'll summarize for you. Unlike AMD's design, the Ada Lovelace-based AD102 will supposedly be a single monolithic die, fabricated on TSMC's 5nm process. Said die will contain 144 shader modules (roughly analogous to AMD's WGPs), each with 128 shader ALUs, totaling 18,432 "CUDA cores."

NVIDIA is purportedly planning a wider 384-bit memory interface connecting 24GB of faster GDDR6X memory at 21 Gbps per pin. If true, that would put the AD102 part at nearly 1TB/sec of memory bandwidth—almost double that of Navi 31. Having a single block of memory connected over a super-fast bus makes NVIDIA's chip equally serviceable for graphics or bandwidth-hungry compute workloads. By contrast, AMD's RDNA 3 design is intended for graphics primarily, and that's the purpose of the large Infinity Cache, which in theory (and in practice, on extant RDNA 2 parts) serves to reduce the bandwidth requirements of graphics workloads considerably.

Greymon55 theorizes a clock rate of "2.3~2.5 GHz" for AD102 as well, which would put the chip somewhere in the 85 to 92 TFLOPs range for single-precision compute. Given NVIDIA's stated status as a "one-architecture company," its chips have to be the proverbial "girl who can do both." Fortunately, Ada Lovelace seems more than up to the task.

Of course, even with bleeding-edge fabrication processes, humongous GPU performance comes at an enormous power cost. As Greymon55 asked last week, "can you accept it?" The leaker themselves comments that while they have no actual data on Navi 31's power usage, they theorize that the total board power must be at least 350 watts, and likely more, on up to as high as 550W. They also state that AD102 "must be" at least 450W, and possibly as high as 650W.

Those kinds of power numbers are going to make these cards a pain to cool, and you aren't going to be running them off your old-school PCI Express power connectors—it would take four eight-pin cables to run such a card! Instead, it seems likely that both AMD and NVIDIA will be using the recently-confirmed PCI Express 5.0 auxiliary power connector. This connector is similar (if not identical) to the one that NVIDIA currently uses on its RTX 3000 series Ampere GPUs, and is rated to supply up to 600 watts over a single bundled cable.

Both products are expected for late next year. NVIDIA's part expected in October 2022, and while there's no leaked timeline for AMD's parts, Greymon55 has implied that the red team is targeting a similar date. Likely, before we see any of these parts hit the market, we'll see that long-rumored RTX 3000 "Super" refresh early next year, as well as Intel's entry into the market with its first discrete GPUs since the ill-fated i740. Assuming the GPU shortage lets up—and Dr. Lisa Su thinks it will—2022 looks to be an extremely exciting time to be a hardware nerd.